Latest technology and gadgets on show at CeBIT Australia

Home » Latest technology and gadgets on show at CeBIT Australia

Latest technology and gadgets on show at CeBIT
Australia
Hyperloop, Driverless pods and cars, 3D scanners and the
innovation of a 16-year-old Australian entrepreneur – RemoteBoot on the
showfloor in 2017 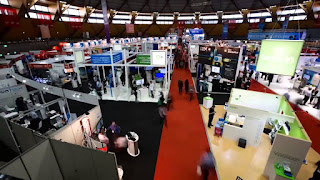 The best of Australian and global technology
innovations will be on show at CeBIT Australia this month, including automated
and futuristic public transport, driverless cars, remote computer access, 3D
scanning and holographic display technology, when the event opens at the
International Convention Centre Sydney, 23-25 May 2017.
In only two weeks, the exhibition showfloor at
Asia Pacific’s largest and longest running business technology event will
showcase an abundance of features revolutionising the way we use, interact and
develop technology, from the simplest of applications in everyday life to the
complexities of IoT and virtual reality.
Technological developments in the future of
travel are set to change the way we get from A to B, making it quicker, safer
and more environmentally friendly. The Australian and New Zealand Driverless
Vehicle Initiative (ADVI) will present an interactive pod which aims
to accelerate the successful introduction of driverless vehicles in our region,
alongside a Volvo, which is currently being trialled across Australia and New
Zealand.
Meanwhile, VicHyper will
reveal an air-tight pod, called Hyperloop, which flies through a
near-vacuum tube reaching speeds of up to 1,000km/h. It strives to get
commuters and freight to their destination in the quickest, safest and most
cost effective way possible.  Borne from the vision of Elon Musk, CEO of
Tesla Motors, SpaceX, PayPal, Solarcity and OpenAI – Hyperloop is the
futuristic fifth mode of transport after planes, trains, cars and boats.
16-year-old Sydney high school entrepreneur,
Ben Wang, has designed RemoteBoot, a device that allows you to
fully access a computer anytime, anywhere without having to leave it on,
reducing the idle power consumption by 99%. RemoteBoot found success on crowd
funding website, Kickstarter, where it has seen over 400 individuals invest
nearly $18,000.
“The difference between RemoteBoot and
Wake on Lan (WoL) is the ability to control the computer without motherboard
support or an ethernet connection. I am looking forward to showcasing my
innovation at the leading business technology event in Asia Pacific.
“CeBIT Australia presents a huge
opportunity to not only share my design with some of the greatest minds in
the industry, but to learn and network with leaders passionate about the future
of innovation in Australia,” said Mr Wang.
Harvey Stockbridge, Managing Director at
Hannover Fairs Australia, commented on the value of showcasing the latest and
greatest emerging technologies as a focus at CeBIT Australia.
“The showfloor features at CeBIT
Australia 2017 are set to be bigger than ever before. It is our honour to work
with world-leading innovators like VicHyper, to the next generation of
Australian entrepreneurs including Ben Wang, showcasing the future of
Australia’s innovation economy,” said Mr Stockbridge.
Other showfloor features include:
·
Voxon
Photonics have developed
glasses-free 3D and hologram display technology that brings digital content to
life without a barrier between you and the hologram
·
EORA
3D Scanner harnesses the
power and optics of smartphones to capture all sides of an object in full
colour with sub-100 micron accuracy reducing the part-count and cost of 3D
scanning
·
Ever realised too late
you left your iron, electric blanket or hair straightener on at home? Wirebutter is
an IoT connected power board that allows appliances to be turned on or off
remotely
In a cutting edge move, CeBIT Australia will
feature live chat help stations by Worker Clicks, who have developed a turn-key
“human to human” customer engagement and experience solution,
allowing visitors to simply ‘tap’ the screens for real-time, face-to-face
assistance.
In 2017, the showfloor will include three
theatres and will host over 50 presentations on Internet of Things (IoT),
digital marketing, user experience, workforce planning in the age of
disruption, cyber-security, location data and more. While 6 strategic
panels will delve into key issues facing the industry, including a CEO Panel,
CIO Panel, Women in Tech, Next Gen & STEM, SME Growth and Innovators Panel.
Over three days, CeBIT Australia offers the
opportunity to hear from the world’s elite, and the ability to connect with
thousands of visitors from Australia’s top companies as well as over 270
exhibitors, including 80+ disruptive start-up innovators.
CeBIT Australia, 23 – 25 May 2017 will
be held for the first time at the International Convention Centre Sydney,
Darling Harbour.
www.cebit.com.au

Hack Horizon Takes to the Skies