AMD showcases the future of graphics and processor technologies at GDC

On 1 March, AMD held its GDC Capsaicin livestream event, a celebration
of PC gaming, the technology steering its future, and the developers who work
tirelessly to transform their imaginations into tomorrow’s blockbuster
games.
The one-hour live event offered PC gaming enthusiasts and developers
around the world a preview of AMD’s latest graphics and processor technologies,
revealed exciting new details surrounding Vega, and showcased the summer’s most
anticipated PC and VR games from visionary game developers. 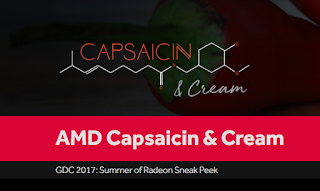 Here is a recap of the action-packed event.

AMD and Bethesda Softworks Partner to Propel PC Gaming Forward
AMD’s “Vega” GPU to Power LiquidSky Platform for Enthusiast-Level
Gameplay Anywhere
AMD and its Developer Partners Embrace Forward Rendering in Unreal
Engine 4 to Improve VR Performance & Fidelity
If you missed the livecast, you can find the recording on
the AMD YouTube channel.