ServiceNow reveals Singaporean companies are
on the brink of a cloud computing tipping point
DevOps leads the charge to a cloud-first
world, with most projects initiating from the bottom-up and deploying at a much
more rapid pace than in the future

Singapore – 16 February, 2017 – Leading enterprise cloud solutions
company ServiceNow has released the findings of their “Cloud Computing Tipping Point” survey, outlining that Singapore is slated
to reach tipping point where majority of enterprises will become cloud-first
within the next two years.
The report surveyed 225 mid to senior managers
evenly split among IT, DevOps and Line-of-Business managers (LOB) in large
enterprises to obtain their insights about shifting from traditional data
center computing to cloud computing (SaaS, IaaS and PaaS).
The results revealed major implications for
IT, with three key findings:
Reality is catching up to the hype for cloud
computing
For years, pundits have predicted an
enterprise shift from traditional data center computing and results have shown
that for the first time ever, almost half (44%) of respondents are taking a
cloud-first approach. This is specifically with new apps and services being hosted
in the cloud as opposed to on infrastructure that the enterprise owns and
manages. This is projected to grow to 59% within two years, revealing how
quickly this shift is occurring.
DevOps is leading the charge to a cloud-first
world
DevOps is a recent trend that was born out of
the agile development movement that aims to reduce the cycle time between
software development releases. This movement aims for early and frequent
communication between IT and developers – which had not traditionally been the case
– and puts pressure on how enterprises deploy new applications.
·         Nearly every respondent (97%) reported that
they are involved in some way with the DevOps movement
·         73% of respondents said that the rise of
DevOps is driving the IT shift
·         59% of respondents see DevOps more as an
operating philosophy to be taught to existing departments, rather than an
entirely new division
A cloud-first world demands new IT skill set
·         85% of companies who have completed making the
shift to a cloud-first model said their current IT staff lacked the required
skill sets to help them make this shift
·         92% of respondents feel that the cloud could
be a replacement for a formal IT department
Yet, while IT is in danger of becoming
obsolete or marginalized in this new order, there were two data points that
showed a silver lining in Singapore.
·         71% of respondents said the cloud shift
actually raised IT’s relevancy to the business
·         65% said IT will be completely essential in
the future
“Cloud computing has been around since the
late 90s and is finally about to reach its tipping point here in Singapore.”
said Jimmy Fitzgerald, Vice-President and General Manager of ServiceNow Asia
Pacific and Japan. “At this point, both opportunities and dangers arise –
enterprises must ensure that they are paying attention and not let themselves
be lulled into inaction.”
Moving to a cloud-first world changes about
everything:
Instead of IT diminishing, an opportunity
presents itself for IT organizations to become strategic partners to the
enterprise by shifting from being a builder of computer infrastructure to a
broker of cloud services. Here are five steps IT leaders can take:
1.
Ask
yourself: What are the services we provide the business? Identify and clearly describe what “service”
means to your organization and how this aligns to key business initiatives at
an enterprise level
2.
Measure
what matters: Focus on the key
performance indicators (KPIs) and communicate progress against them to the
larger organization
3.
Ask
hard questions of the leaders of this change: Leaders need to identify any inefficiencies and hold each
other accountable for the service dependencies between their teams
4.
Make
IT matter: Streamline the IT
organization to align more towards more revenue-driving initiatives that are
important to LOBs to regain the trusted partnership with the business and
provide higher satisfaction overall
5.
Focus
on what you do best. Let industry leaders take care of the rest: IT organizations need to focus
innovation and top-line revenue generation instead of trying to be a system
builder and operations center
Survey Methodology
§ ServiceNow commissioned ReRez Research of
Dallas to design and conduct a study about the state of cloud computing in
companies with 500 or more employees.
§ The survey was fielded during August 2016 in
the United States, the United Kingdom, Australia, Singapore, Germany, France
and the Netherlands.
§ 1,850 senior managers, split evenly between
IT, DevOps and Line of Business (LOB) management roles completed the survey.
§ 225 Singaporean senior managers, split evenly
between IT, DevOps and Line of Business (LOB) management roles were included in
the sample. 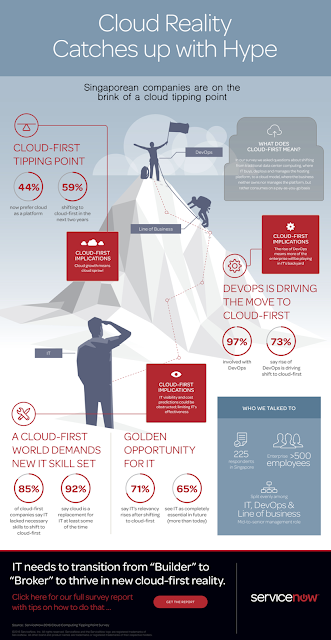 Unleashing Innovation through the Power of Participation