Setting up your Wireless Network with Linksys Wireless AC Solutions

Setting up a high performance wireless network can be a pain in the neck, especially if you are someone with no prior knowledge with computer networks. There are so many different possible types of configurations and setups available which confuses many users. Luckily, Linksys has a whole range of product solutions available to meet the needs of various kinds of users.

In this article, we are going to look at the Linksys EA9500 Max-Stream™ AC5400 MU-MIMO Gigabit Router, RE7000 Max-Stream AC1900+ Wi-Fi Range Extender and WUSB6100M Wireless AC Receiver, and the roles they play in our new wireless network setup. We will also put our new network to a simple test, where we will also discuss the performance and features that are available. 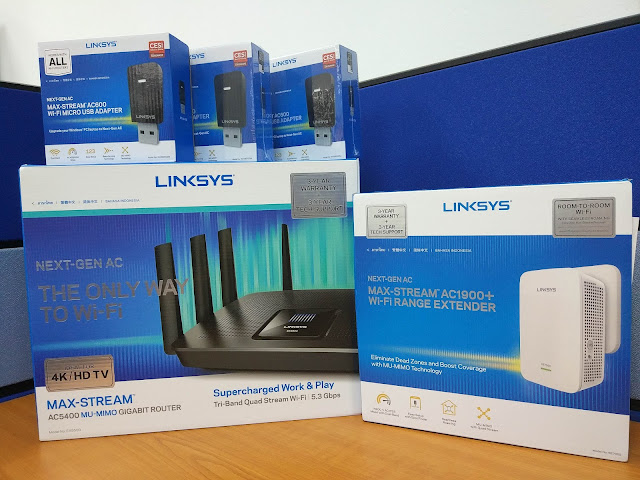 The computer network infrastructure in this particular office has been deemed as outdated, and urgently needs an upgrade to support even more users who will be connected to a wireless network simultaneously. The new network should be able to support up to 100 connected computer clients at the same time, and still provide wireless speeds of minimally 10Mbps directly to the internet. This network will be connected to a fibre line from a local internet service provider who will provide 100Mbps of bandwidth to the local area network.
In order to meet such requirements, specific high performance network hardware are required. The Linksys products as mentioned above will be perfect for such a SOHO setup. Moreover, as the meeting room on the lower level of the office is enclosed, and wireless signals may be weak, the Wi-Fi Range Extender will work extremely well to further extend the wireless capabilities of the router.

The Network Design and Plan 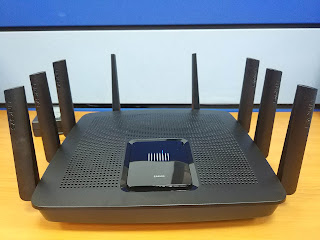 The Linksys EA9500 Max-Stream™ AC5400 MU-MIMO Gigabit Router will be a great choice for such an office setup. Since it can reach a maximum wireless bandwidth of 5.3Gbps, it would be perfect for all the clients connected to the router, there would be more than enough bandwidth for simultaneous usage. This Tri-Band router serve wireless signals over the 2.4GHz frequency, which can reach speeds of up to 1Gbps. On the other hand, it also has two 5GHz bands which can transmit up to 2167Mbps each. This Gigabit wireless router is ready to handle any kinds of wireless workload you throw at it, in the toughest possible SOHO networking environments. Moreover, with a quad stream MU-MIMO support, multiple users can transmit and receive wireless signals at the exact same time.

Since Wi-Fi signals are spread out from the router and have a downward motion, the router is preferred to be placed at a higher ground. Therefore, the Linksys EA9500 is placed on one of the cubicles on the higher level. As the signal strength of the Linksys EA9500 is considerably strong, we have no concerns of wireless connectivity on the higher level. However, after experiencing poor wireless signals and frequent disconnections on our previous wireless network in the meeting room on the first level, we decided to place a wireless repeater on the first level, nearer to the meeting room to extend the wireless capabilities of the EA9500. 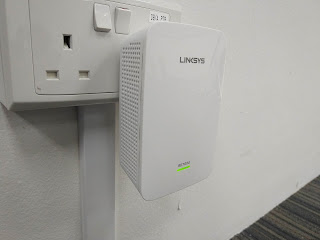 The Linksys RE7000 AC1900+ WiFi Range Extender is another network device that is packed with great specifications. This range extender boasts speeds of up to 2Gbps, with the first band on 2.4GHz at 300Mbps, and second band on 5GHz at 1733Mbps. It is actually quite rare to find a dual band wireless repeater/extender in the market which can forward packets on both bands at the same time. Moreover, the RE7000 also include a Gigabit LAN port to enable it to be used as a wireless access point. We were glad that Linksys has included the Gigabit LAN port, and some other manufacturers have decided to go with a Fast Ethernet 100Mbps port instead, defeating the purpose of such fast wireless capabilities. 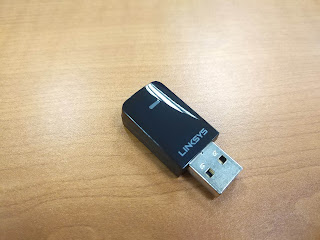 Of course, the network clients must have the latest Wireless AC network receiver to enjoy such high wireless internet speeds. In our review, Linksys has also included the WUSB6100M Max-Stream AC600 MIMO USB adapter which will work well with the EA9500 router. The USB adapter is extremely portable, and can even connect to the wireless network with a bandwidth of up to 433Mbps. 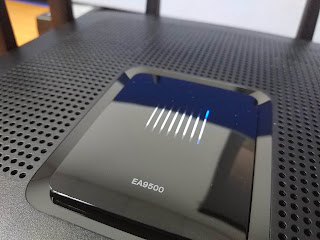 We will really like to commend Linksys for making it extremely easy to setup the EA9500 Max-Stream™ AC5400 MU-MIMO Gigabit Router. Even though the unit was fresh out of the box, we simply had to power the unit up, plug in the Ethernet cable from the fibre termination point to the WAN port on the router to get internet access on our systems. If no additional customization are required, users can also choose to connect to the wireless networks with the default settings. The SSID and wireless network password are all stated on the bottom of the router. 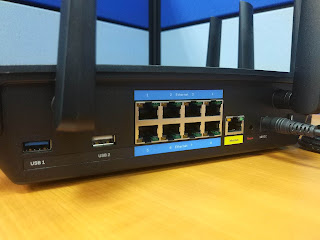 The Linksys EA9500 Max-Stream AC5400 MU-MIMO Gigabit Router also has 8 Gigabit Ethernet ports and 2 x USB ports. This allows the router to also act as a Gigabit switch for wired networking, or even a file server when a USB storage device is plugged into the USB ports. 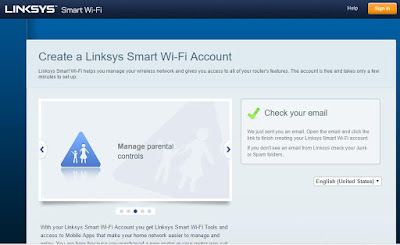 However, it could be quite a hassle to go into the advanced configurations of the router. Every user who wishes to configure the router will have to sign up with Linksys online before configuration access will be granted. 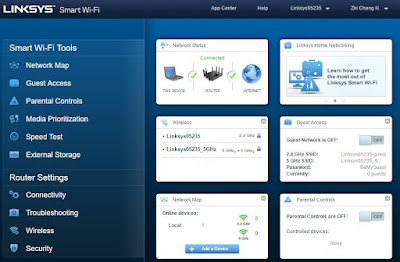 Nonetheless, Linksys has made is very easy to change the common settings of the router, such as SSID and wireless password. They have also included a Guest Network feature, which allows an additional network to be created for guests with the password set on the router to be logged on. Such feature is considered a value-add to what the business requires. Visitors to our office can now easily connect to our wireless network, without the team worrying too much about security and bandwidth limitations! 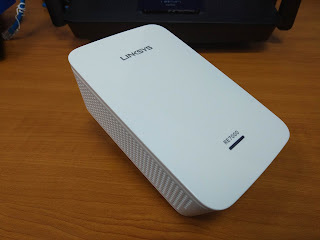 The compact design of the RE7000 WiFi Range extender also makes it very easy to be implemented. Since the power plug is built right into the device itself, it will be convenient for users to place it anywhere suitable. 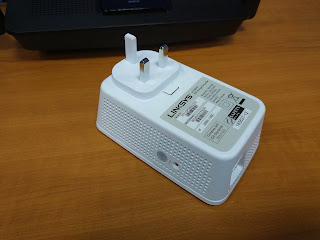 Linksys has also included plugs from UK/China/Europe that are interchangeable. 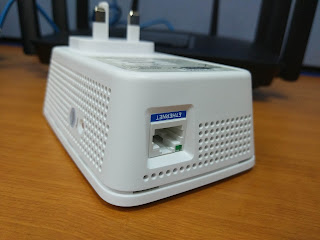 Even though the RE7000 is branded as a wireless extender, it can also work very well as a wireless access point, thanks to its great wireless specifications. 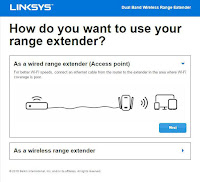 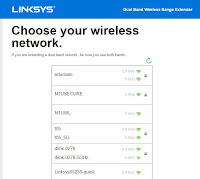 In the tests, we will have three different setups. The first setup is connected to the router directly via a UTP cable for Gigabit LAN. This will test the speed of the ISP and will act as a control for our tests. The second setup will be a wireless client that is about 20 metres away from the main router. This wireless client will be using the WUSB6100M Wireless AC Receiver. In  the third setup, we will connect the WUSB6100M to a laptop, and move down to the meeting room on the first level for the test.
The two test taken will be SpeedTest via beta.speedtest.net and LAN Speed Test, which tests the transfer speed within the LAN. 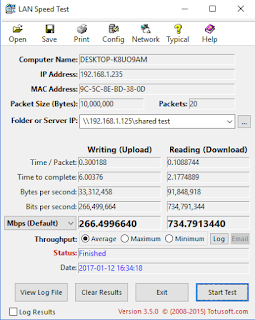 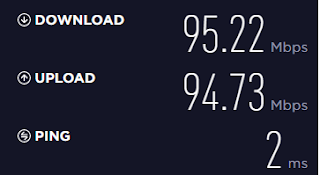 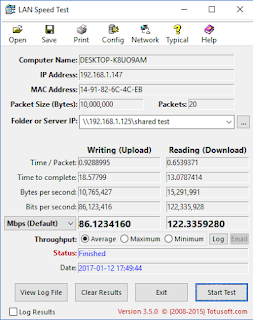 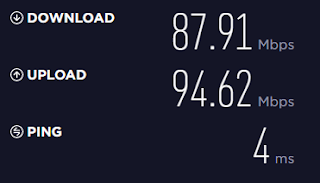 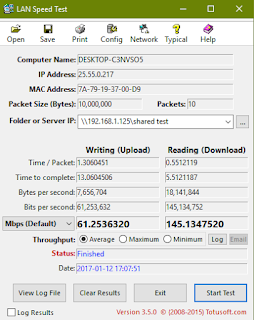 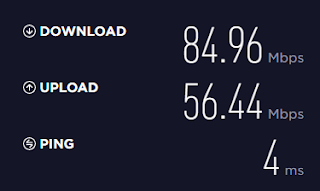 As seem from all the tests, it seems that the new Wireless AC signals were much stronger than before, and despite having thick walls that may block off the signals in the meeting room, speeds were not really affected. It can also be seen that the wireless speeds are also very close to the actual wired network speed. However, it seems that wireless file transfer is largely slower that a wired connection.

Did the setup from Linksys meet our requirements? Definitely! With the great performance and features that are available on the Linksys EA9500 Max-Stream™ AC5400 MU-MIMO Gigabit Router, RE7000 Max-Stream AC1900+ Wi-Fi Range Extender and WUSB6100M Wireless AC Receiver, there was nothing much we could ask for. In fact, the tests and current network load is barely giving the router any sweat. The router could easily scale up to support many clients at the same time.

If you are looking for a new network setup for your home or office, do give these products from Linksys your consideration as they are genuinely quality products. We could only ask for more customization features on their routers, such as VPN, DDNS etc. Other than that, it works great for any layman who wants to get started with something powerful.