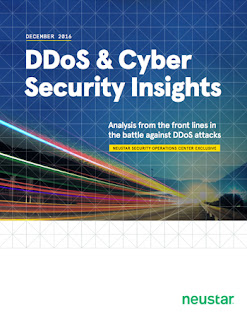 December 15, 2016
– Singapore. –
Neustar, Inc.
(NYSE: NSR), a trusted, neutral provider of real-time information services,
today announced the publication of “DDoS & Cyber
Security Insights,”
an in-depth research report that provides statistical analysis of the
distributed denial of services (DDoS) attack and mitigation data
collected through Neustar SiteProtect. The report
examines the growth of DDoS attacks during 2016, providing specific
insight into multiple attack vectors, such as DNSSEC amplification and
Internet-of-things (IoT) botnets.
“With
DDoS attacks predicted to become even more complex and ferocious in
2017, increasingly digital organisations within Asia-Pacific will be
exposed to more frequent
and severe cyber-attacks.” said Robin Schmitt, General Manager, APAC at
Neustar.
“DDoS
& Cyber Security Insights” analyzes attack and mitigation data
collected through Neustar SiteProtect, a global DDoS mitigation network,
from January 1, 2016 through
November 30, 2016. Key findings include:
·
Increasing Frequency of DDoS Attacks – The frequency of DDoS attack mitigations by Neustar has increased 40 percent compared
to the same period of time in 2015.
·
Eruption of Multi-vector Attacks
– Multi-vector attacks, which combine attack vectors to confuse
defenders and supplement
attack volume, increased 322 percent and accounted for 52 percent of
the attacks mitigated by Neustar. UDP, TCP and ICMP comprise the three
most popular attack vectors, which were leveraged in more than 50
percent of attacks.
·
Vulnerability of DNS and DNSSEC
–
DNS-based attacks increased 648 percent with many attackers leveraging
DNSSEC amplification to generate massive volumetric pressure. Previous
Neustar research, “DNSSEC:
How Savvy DDoS Attackers Are Using Our Defenses Against Us,” determined that the average DNSSEC amplification factor for a DNSSEC signed zone was nearly 29 times greater than
the initial query.
·
IoT Botnets Emerge as DDoS Attack Tools
– The
threat of IoT botnets was realized in 2016, which was popularized by
Mirai. Mirai and similar types of malware compromise IoT device
credentials to enroll them into botnets, which are activated
by command and control servers. As these code assemblies are published,
new developments continue to emerge, such as persistent device
enrollment, which enables botnet operators to maintain control of a
device even after it is rebooted.
“In
the world of DDoS defence, having the wrong solution or inadequate
capabilities can be the difference between reading the news and making
the news. Organisations
in APAC need to invest in technologies and services that specifically
combat such attacks or risk significant financial loss and reputational
damage.” said Schmitt
For more information about “Neustar Customer Security Operations Report,” please visit:

Happy Holidays from Adobe - Spread some festive cheer with your face!