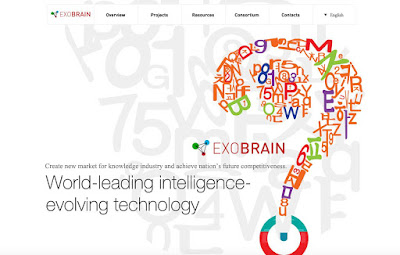 On November 18 Exobrain went “head-to-head” with human competitors on the television quiz show, “Janghak Quiz”, which was recorded at the ETRI auditorium. Exobrain outpaced all competitors by scoring 510 out of 600 points, providing correct answers for 25 questions out of 30 (10 multiple-choice and 20 short-answer questions). The Exobrain defeated four human quiz prodigies: Mr. Yun Ju-il (finishing in 2nd place), a freshman of Seoul National University who attained a perfect score in last year’s national college entrance exam; Mr. Kim Hyeon-ho and Miss Lee Jeong-min, the champions of the “Janghak Quiz” in the first and second half of 2016, respectively; and Mr. Oh Hyeon-min, who is studying mathematical sciences at KAIST and demonstrated his outstanding intelligence in a televised brain game.

Here’s how Exobrain works: once a question is given, the system first derives keywords. For instance, in response to the question: “What is the stone tablet found in Egypt and described in Empire of the Ants, a novel written by Bernard Werber, which enabled communication between humans and ants?”, the AI system searches such keywords as Werber, ants, communication, stone tablet and Egypt from its database before filtering tens to hundreds of possible answers. Next, it measures each potential answer against the question, assessing the reliability of each answer and finally submitting the most reliable answer. It only takes six to seven seconds to work out an answer.

In the quiz contest, Exobrain dominated the human competitors, but the system did not get all the answers right. The research team explained that Exobrain made a few wrong answers because some questions were related to fields the system had not learned about yet and the system did not have sufficient data to infer correct answers. The team added that further research and development would be required to conduct a semantic analysis of languages.

According to ETRI, the core artificial intelligence (AI) technologies of Exobrain are: Korean language analysis technology, to analyze the grammar rules applied to sentences as its human counterparts can do; knowledge acquisition and exploration technology, to learn and store linguistic knowledge and unit of knowledge(a subject–predicate–object structure) from vast amount of books, documents, Wikipedia articles, dictionaries, and so on; and natural language QA technology, to understand questions comprising multiple sentences and infer answers.

The quiz contest was intended to verify the level of first-stage technology developed over the first four years of the 10-year research period. The second and third stages of research are scheduled to be completed by 2022. For phase two, ETRI plans to focus on developing applied technologies and achieving globally competitive performance of QA solutions for expert knowledge including counseling, legal and patent areas.

The last phase of the project will focus on developing QA solutions for expert knowledge in both Korean and English so that the AI system can engage in QA activities regarding expert knowledge described in English. In addition, ETRI researchers are committed to developing QA solutions for AI robots and wearable devices that can be utilized with a range of smart devices.

Currently, Exobrain shows a level of performance similar to that of Watson, the AI system developed by IBM. In 2011, Watson appeared on the CBS quiz show “Jeopardy!” and defeated human quiz champions. Through further development, this AI system is now supporting the decision-making processes of medical, financial, and legal professionals.

ETRI aims to commercialize Exobrain within the next three years. Exobrain will be used to conduct prior analysis of areas requiring revision of law in partnership with the National Assembly Library, and the AI system is also expected to be used for filtering overlapping technologies in the process of screening patent applications.

“The correct answer rate of Exobrain is 83% on average, which is higher than Watson’s performance (70%) in 2011,” says Dr. Dong Won Han, Vice President of ETRI, SW and Contents Research Laboratory. “Considering that Exobrain was originally developed for the Korean language, it will have further potential uses when it is upgraded.”