OSVR LAUNCHES THE HDK
2 – AN OPEN SOURCE 2160 X 1200 DUAL DISPLAY VR HEADSET – IN THE ASIA PACIFIC
REGION
The OSVR, SteamVR and WebVR compatible headset
will now be available to developers and enthusiasts in 10 additional countries
to power innovation.
UNITE SINGAPORE– Organizers of Open Source Virtual Reality
(OSVR), the largest open source virtual reality consortium in the world, today
made the latest Hacker Development Kit, the HDK 2 available in 13 countries
within the Asia Pacific.  The HDK 2 features an upgraded display for a
visual experience on par with the Oculus Rift and HTC Vive. 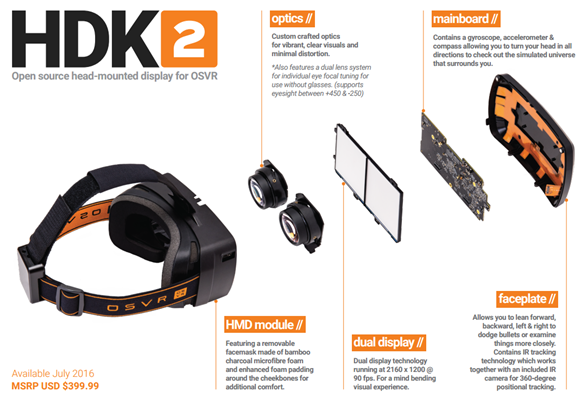 The HDK 2 was engineered to be an open source solution in the VR market today
allowing developers and enthusiasts the freedom to innovate around virtual
reality without restrictions. Powered by OSVR, an open source software platform
content developers will be able to support a multitude of emerging devices in
the VR industry across different brands through a single integration,
effectively increasing their user base with minimal effort.
It is also modular
allowing for 3rd party customization.
Content:
Powered by the OSVR
software platform the HDK 2 will be able to play native OSVR experiences as
well as SteamVR content (VR content developed for the HTC Vive).
In addition to this it
also supports WebVR and other 360 video and media playing technologies.
Full list of
experiences here: http://www.osvr.org/featured.html
Setup &
Installation:
A beta version of the
HDK Windows Installer is available to make set up of the HDK 2 easier.
Download it now: http://www.osvr.org/getting-started.html
“The HDK 2 is
engineered to deliver a visual experience on par with the industry’s best while
keeping it at a more affordable cost point in order to bring VR technology to
more people.” Says Christopher Mitchell, OSVR Lead, Razer. “It will now also
give developers and enthusiasts within the Asia Pacific the freedom to innovate
and support a myriad of VR technologies across the world”
List of countries the
HDK 2 is now available in:
·         Australia
·         New Zealand
·         Philippines
·         Japan
·         Thailand
·         Taiwan
·         Malaysia
·         Singapore
·         South Korea
·         Hong Kong
The HDK 2 is now
selling on Razerstore (www.razerstore.com) and will come with 2 free
games, Descent: Underground & Radial G : Racing Revolved while stock lasts.
·         Descent: Underground: www.descentunderground.com
·         Radial G: Racing Revolved: http://www.radial-g.com
What is OSVR?
OSVR is an open source
software platform that drives innovation and diversity by allowing different
brands of VR hardware to connect with each other. Giving hardware developers
the ability to have their hardware interface with other devices in the VR
industry and also allowing them to freely innovate and produce the best
products possible without fear of control and licensing fees.
It shares content to
help drive hardware sales
In addition to this,
all content supported on the ecosystem; including native OSVR experiences and
SteamVR experiences (HTC Vive content) will run on their hardware, giving them
a chance to enter the market with an already available base of content to drive
sales of their hardware.
Further driving this
content effort is also a recently announced 5 million dollar content fund
sponsored by Razer, incentivizing content developers out there to support OSVR
in order to make content available to all OSVR supported hardware in order to
combat exclusivity and ensure the VR industry grows as a whole.
It supports the latest
technologies
As the software
platform also supports the latest engines (Cryengine, Unreal, Unity) and
performance enhancing technologies such as Nvidia’s direct mode, hardware
developers will also be able to take advantage of them ensuring their hardware
performs optimally.
It is for consumer
choice
The platform’s
objective is to ultimately bring choice to the consumer market, allowing
everyone to mix and match their VR hardware purchases based on preferences in
price and functionality.
“Imagine being able to
walk down an isle of VR products in your favorite electronics retailer and
being able to pick off any combination of hardware you’d like to use without
worrying about compatibility.” Says Michael Lee, VP of Software, Razer. “It will
be like building your own PC, except this time using cutting edge next
generation technology that will immerse you digital experiences like never
before.”
Try the HDK 2!
Unite Singapore –
October 3rd and 4th
The HDK 2 will be
available for trial at Unite Singapore, October 3rd & 4th at
Sands Expo and Convention Centre at Marina Bay Sands.
Christopher Mitchell,
OSVR business lead from Razer will be giving a talk at the event, Oct 4th –
1130 to 1230am
PAX Australia –
November 4th to
6th
It will also be available
for trial at PAX Australia in Melbourne, November 4th to 6th at
the Melbourne Convention Centre.
Annex:
HDK 2 MSRP:
·         Australia: $649.95
·         New Zealand: $699.95
·         Philippines: $21,990
·         Japan: $49,800
·         Thailand: $ 15,990
·         Taiwan: $14,490
·         Malaysia: $1,899.90
·         Singapore: $604.90
·         South Korea: $579,000
·         Hong Kong: $3,339
Comparison Chart:
HDK 2 Specifications