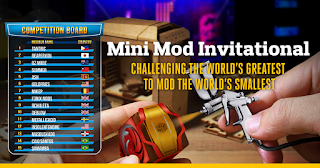 Taipei, TAIWAN – Cooler
Master, a leading manufacturer of desktop components and peripherals, today
announced the Mini Mod Invitational. This global modding competition invites 15
modders from 12 different countries around the world to challenge themselves by
modding possibly the world’s smallest PC case.
The Mini Mod is a
miniature recreation of the MasterCase 5 by Cooler Master, the first of their
new flagship line of PC cases. This model is made out of wood and cardboard,
but can be assembled and taken apart like a 3D puzzle. Like the MasterCase 5,
the Mini Mod has multiple forms in one. It can take the shape of any of the
three MasterCase 5 types: Basic, Pro, and Maker. The model also includes
additional parts not included with the MasterCase 5 such as the MasterWatt Maker
1200 power supply, the MasterAir Maker 8 CPU air cooler, a motherboard, and a
hard drive cage with five HDDs. The Mini Mod also has the various removable
panels, fans, and airflow openings that you would find on an actual MasterCase
5.
The Mini Mod was
created as a simple and entertaining way to educate novices about PC building
in a much more accessible and non-intimidating way. The idea was to recreate
the PC building experience while removing the fear and risk of damaging
expensive components when you’re first trying to learn how to build one. While
obviously a simple wooden puzzle could never fully emulate the level of
knowledge and attention to detail required to build an actual PC, Cooler Master
believes that projects like this are an effective way to motivate potential
makers of all ages to take an interest in building their own PC.
As a part of this
awareness campaign, Cooler Master has decided to host an international modding
competition by invitation. 15 modders from around the world including countries
such as the Malaysia, USA, Japan, Brazil, and the UK have been invited to
participate in a no holds barred modding contest. Modders are not only free,
but encouraged to use whatever skills and ideas they have to create the most
impressive Mini Mods possible. While this is meant to be a friendly and very
casual event, it is still a competition and there is an actual trophy for the
modder who wins first place.
Cooler Master has opted
to make this a people’s choice competition. In one week’s time, the modders
will submit their final designs and the public will be able to vote on Cooler
Master’s modding website. The Mini Mod with the most votes will win the trophy
and the pride. Users who vote will be entered into a raffle to win a free mouse
from Cooler Master. Voting and the raffle prize is open to the public
worldwide. Cooler Master will cover all shipping costs for raffle winners.
To get involved and
find updates as the competition unfolds, please visit:
http://makerhub.coolermaster.com/mini-mod-invitational/

A Dell Christmas For Everyone