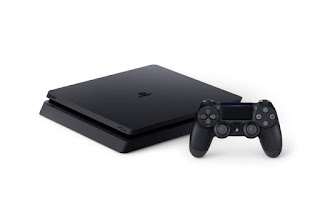 Singapore, 8th September,
2016 – Sony Interactive Entertainment
Hong Kong Limited Singapore Branch (SIES) todayannounced that a new
slimmer and lighter PlayStation®4 (PS4™) (CUH-2000 series) computer
entertainment system with a 500GB HDD will become available in Singapore
starting from 17th September 2016 at suggested retail price (SRP) of
SGD449*1.
​The internal architecture of the new PS4 system has been revamped, reducing
its volume by more than 30% compared to the previous models and reducing its
weight by 25% and 16% compared to the first (CUH-1000 series) and current
(CUH-1200 series) models respectively. Also, the new PS4 system is more energy
efficient, as the power consumption has been cut by more than 34% and 28%
compared to the very first and current models.
The form factor of the
new system inherits the slanted body design of the previous models, with the
foreside and backside of its body slightly angled. The corners are trimmed and
curved, giving it a softer impression that would appeal to a wider range of
audience.  The new simple look, with gloss finished PS family mark
designed on the center of the top surface, will fit perfectly wherever it is
placed.
Furthermore, looking
ahead to the future of imaging technology, all PS4 systems including the new
slimmer model and PlayStation®4 Pro will support HDR (High Dynamic Range)
imaging technology*4, which enables the reproduction of brightness and darkness
while realizing a much wider range of colors. Users who own an HDR-compatible
TV will be able to enjoy supported games and other entertainment content with
visuals that are more realistic, strikingly vivid and truer to the way the
human eye sees the real world.
Approaching its third
year since launch, PS4’s games portfolio is stronger than
ever, and will continue to expand with highly anticipated titles from
third-party developers and publishers as well as from SIE Worldwide Studios such asFINAL
FANTASY XV (SQUARE ENIX CO., LTD.), Gravity Rush 2, Horizon
Zero Dawn (SIE WWS), Ryu Ga Gotoku 6 Inochi no Uta.(SEGA
Games Co., Ltd.), The Last Guardian (SIE WWS), Thumper (Drool).
Sony Interactive Entertainment Hong Kong
Singapore Branch (SIES) announced today at “2016 PlayStation® Asia Conference”
that PlayStation® 4 Call of Duty®: Infinite Warfare Bundle
Pack will be available in Singapore at MSRP of SGD549 from 04 November
2016. The bundle includes one 500GB PlayStation®4 System (Jet Black,
CUH-2006AB01), one copy of PlayStation® Call of Duty: Infinite Warfare
Legacy Edition and one voucher card of PlayStation®Plus 12-month
Subscription.
SIE is focused on
expanding PS4’s ecosystem by introducing new system features like HDR,
launching high quality exclusive PlayStation games, pushing innovation in
gaming through PlayStation®VR, and building online services offered on
PlayStationTMNetwork.
###
*1 The price of PS4 with
1TB HDD is SGD499.
*2 All PS4 will support
HDR by the upcoming system software update.
*3 Title line-up differs
by regions.
*4 The hard disk drive
contains space that is available for users and space that is reserved for the
system, therefore the actual space that is free for users is smaller than the
total space stated in the document.
Call
of Duty®: Infinite Warfare