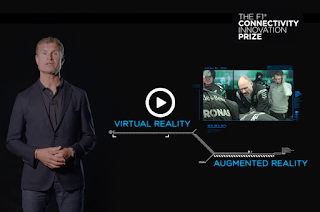 SINGAPORE, 12 JULY 2016 – Tata
Communications,
the Official Connectivity Provider to Formula 1® and the
Official Managed Connectivity Supplier of the MERCEDES AMG PETRONAS Formula
One™ Team is, together with Lewis Hamilton, unveiling the second
challenge of the 2016 F1® Connectivity Innovation Prize. The challenge asks fans worldwide to
harness their technical know-how and passion for F1® racing to
see how virtual reality (VR) or augmented reality (AR) technologies could be
used to help the team collaborate more quickly and efficiently in the run-up to
and during each Grand Prix.
For
a chance of winning the USD $50,000 Grand Prize, fans need to develop a solution that uses VR or AR to
enable closer collaboration between the team of engineers trackside, and those
working remotely at the team’s factory in the UK. Currently, the two
teams of engineers come up with a race strategy, review component changes and
resolve any issues using audio communications and two-way video feeds between
the track and the factory. The objective is to show how this collaboration
could be enhanced using VR or AR during mid-season tests, practice, qualifying
or race day, helping the two teams to become a more closely integrated unit,
and ultimately boosting the drivers’ competitiveness.
Paddy
Lowe, Executive Director (Technical) of the MERCEDES AMG PETRONAS Formula One™
Team, and one of the judges of the 2016 F1® Connectivity
Innovation Prize, says, “There is great scope for us to use the latest VR and
AR technologies to enhance and speed up both the remote team’s ability to
analyse car data and suggest solutions to issues that may arise on the track,
and the trackside team’s ability to harness the insights from the remote team. These ideas
could give the team a new kind of competitive edge.”
Lewis Hamilton says, “It’s been amazing to
see fans come up with such bold ideas over the last two years. I can’t wait to
take a look at the 2016 entries and see what the future of the sport might look
like.”
“VR
and AR applications are set to transform how people engage with each other and
the world around them, so the exhilarating, high-pressure environment of F1 is
the best place to explore the full potential of these technologies,” says Julie Woods-Moss, Tata
Communications’ CMO and CEO of its NextGen Business. ”With this challenge,
we look to unleash the collective brainpower of F1 fans and technology
enthusiasts worldwide to show how creative applications of VR and AR,
underpinned by superfast
connectivity, could boost F1 teams’ competitiveness.”
In
addition to Paddy Lowe and Lewis Hamilton, the judging panel includes John
Morrison, Chief Technical Officer of Formula One Management; David Coulthard,
former Formula 1® race driver and Channel 4’s F1® racing
Lead Expert Analyst and commentator; Martin Brundle, former Formula 1® race
driver and F1® commentator for Sky Sports F1® and
Mehul Kapadia, Managing Director of F1® Business at Tata
Communications.
The first challenge, set by Formula One
Management, called on fans to develop a solution that uses VR or AR to
enable people at home to experience a Grand Prix virtually. The winning solutions, by James Gough and
Rich Pilsbury (UK), Paul Clarke (Australia) and Datu YogaBrata (Singapore),
showed how fans who are not at the live event, could immerse themselves into
the exciting world of F1® racing – from the pit lane and the
Formula One Paddock Club™, to the drivers’ parade and the starting grid
formation.
The
jury picks three winners from each challenge of the F1® Connectivity
Innovation Prize. The six winners will
be awarded trips to the 2016 FORMULA 1 UNITED STATES GRAND PRIX in October,
where the jury will announce the Grand Prize winner. The Grand Prize is acheque for $50,000 and a bespoke trophy. A full brief for the
second F1® Connectivity Innovation Prize challenge can be
downloaded from the F1® Connectivity Innovation Prize website. The
closing date for the second challenge is July 27th 2016.
As the Official Managed
Connectivity Supplier to the MERCEDES AMG PETRONAS Formula One™ Team, Tata Communications has trebled the speed of
data transfer for the team, enabling
real-time communications between the trackside and the team’s factory in the
UK, and paving the way for the team to develop new, innovative ways to use
data.
Twitter hashtag: #tatacommsf1prize