Meet Robi: The Interactive Robotic Companion that Speaks Singlish
Robi by DeAgostini is a build-it-yourself robot that aims to bring
families closer together 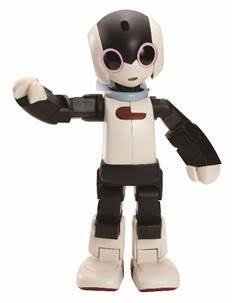 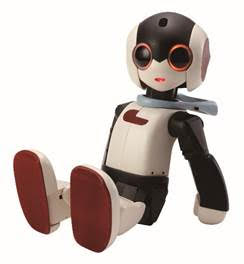 Singapore, 15 June 2016 – Robi, possibly the first ever robot able to speak Singlish,
arrived in Singapore today with the launch of the Robi online store. Robi is a
fusion of sophisticated design and advanced Japanese technology that was
designed to provide interactive companionship with the entire family. To provide
an in-depth understanding of how Robi works, an educational magazine along with
instructions and model parts, are delivered over the course of 70 issues.
Families and robotic enthusiasts can look forward to assembling Robi with their
own hands.

From 9 to 10 July,
families can learn more about Robi’s emotive functions at a roadshow in Marina
Square Shopping Mall. Professor Tomotaka Takahashi, the creator of Robi, and
Yujin Kimura, Consumer Robotics Manager, will be on site to introduce Robi to
visitors. To celebrate Robi’s debut in Singapore, there will be a special
performance featuring 100 Robi robots in a synchronized dance. Building on the
theme of “ASSEMBLE ROBI, UNITE A FAMILY”, the event will also provide
opportunities for families to get acquainted with Robi through hands-on
experiences at the interactive stations, and have their photos taken at a
Robi-themed photo booth.
Incorporating
cutting-edge robotics technology from Japan, Robi has become the bestselling
humanoid robot worldwide. He can communicate with users, even expressing
emotion through the colour of his eyes. He can talk, sing, dance and control
selected household appliances. He has an extensive vocabulary of more than 250
phrases, providing a deep level of interaction between humans and robots. The
specially designed Singapore version of Robi has also been programmed to speak
some Singlish phrases, as well as English and Chinese.

“I truly believe that artificial intelligence and the
creation of responsive robots can bring tremendous benefits to people and
society, and I dream of fostering closer relationships between robots and human
beings. We’re excited to introduce Robi to Singapore, and hope to inspire the
next generation of Singaporeans to harness technology to improve the lives of
citizens and build stronger communities.” Professor Tomotaka Takahashi

Aside
from providing assembly instructions, the magazine delivered each week will
also include educational materials to teach children more about the field of
robotics. Robi has also been designed so that no prior skills is needed by
either adult or children to assemble. The only tool required is a screwdriver
that comes along with the magazine. As digitization goes mainstream and becomes
more advanced, the hands-on learning experience from building Robi will provide
children with the opportunity to understand the basics of robotics technology.
As
one of the world’s leading robotics scientists, Professor Takahashi created
Robi exclusively for DeAgostini. His keen interest in robotics grew from a
young age, when he patented his first invention while he was still a student,
and founded Robo Garage – a robotics group based in Kyoto University – upon
graduation. Professor Tomotaka is responsible for many key developments in
robot design, bringing to life Kirobo, a 3.5m-tall earthquake rescue droid, and
he has even put the world’s first humanoid robot astronaut in space in 2013.
Robi
retails at $28.90 per issue and
available at selected supermarkets, convenience stores, bookstores and
newsstandsfrom 5
July onwards.
The
first issue will be available at the promotional price of just $9.90. Customers who subscribe online
will also have a promotional discount – More details can be found on the Robi
online store, www.robi.sg
Members
of the public can visit the roadshow from 9 to 10 July at the Marina Square Shopping Mall.
Fans
can stand a chance to win exclusive Robi merchandise with our #ROBIGRAM
competition on Instagram and Facebook.
#SGROBI
Kindly
download the accompanying photos of Robi here: https://we.tl/wrLoWo7Fxq
###
Key
Features and Functions of Robi:
·         Dimensions: Height: 34 cm – Weight: Approx. 1kg
·         Light-up LEDs:
Built-in LEDs allow Robi’s eyes and mouth to respond to words and movement. His
eyes can glow red, yellow, green and blue, while his mouth will glow red.
·         Speech-recognition Board: Robi has a sophisticated speech recognition board
programmed to understand different phrases and reply appropriately. The
Singapore version will be able to speak English, Chinese and Singlish.
·         Microcontroller Board: The high-performance microcontroller board
controls important functions such as Robi’s motion and reactions.
·         Speaker: Robi’s chest includes a miniature speaker for his spoken
responses.
·         Remote-control Module: Emits infrared signals like a remote control to operate
compatible TV sets.
·         Motion Sensors: Robi’s motion sensors detect human presence and
will turn his face in response to movement.
·         Servo Motors: Robi’s movements are controlled by a total of 20 servos.
They use the Robi-servo command system to ensure smooth movement, and have
simple, robust wiring connections.
·         Dual-purpose ‘Scarf’: Robi’s light-blue scarf functions as a
convenient handle for lifting him without damage to his joints and internal
wiring.
·         Timer: Robi can count down a specified number of minutes, and tell
you when the time is up.
·         Cleaning: Robi can use his feet to polish a tabletop or
hard floor surface.
·         Security Setting: Robi can be set to ask for a password and
respond with an alert if he gets the wrong answer
·         Games: Robi knows how to play a variety of games, including
‘soccer’ and quizzes.
·         Battery Charging: When Robi’s batteries begin to run low, he says
‘I’m hungry’ to let you know. Then it’s time to turn on his charging seat, so
Robi can start to recharge.
Robi
is suitable for kids above the age of 6. Parental supervision is recommended
for younger children as there are small parts.