LeShare: To build a sharing ecosystem with vehicle, charging and parking

Home » LeShare: To build a sharing ecosystem with vehicle, charging and parking

LeShare: To build a sharing ecosystem with vehicle, charging and parking
May 23, 2016 – LeEco launched its EV time-share service, LeShare, in China on May 20, 2015. The social application LeShare integrates hardware and content resources of the Le Ecosystem by linking the up-stream and down-stream suppliers of the EV industry, showcasing the four features of the car ecosystem, namely being electric, smart, connected and social.
To reach a fleet of 500 vehicles by the end of the year in Beijing and expand to cover the key cities in China within 2 years 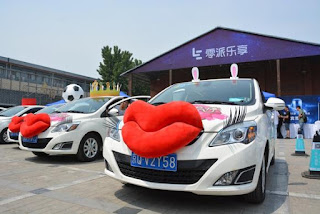 Leshare is among China’s first time-share EV businesses. The trial run started last December and the registration for membership was open to the public at the end of April this year.
Le Holdings, the parent company of LeShare, is planning to invest 2 billion RMB by the end of 2019 to support the platform. The platform covers almost all mainstream electric vehicles on the market to meet the various demands of customers. In the first half of 2016, LeShare already put nearly 200 fully-owned vehicles to the roads in Beijing’s main city districts, covering the main business areas with the busiest traffic.
Another 500 vehicles are expected to be purchased and put into use in more than 200 points in Beijing by the end of the year, ensuring at least 2 to 3 vehicles at each point. At the same time, LeShare will expand to seven cities including Shanghai, Shenzhen, Chengdu, Chongqing, Sanya and Yantai, where local operation companies will be set up to work actively with the local governments. With the endorsement from the government, LeShare strives to complete its network in all major Chinese cities in 2 years.
Integrated operation of vehicle, charging and parking
LeShare announced that it would completely open up its platform to include the entire industrial chain by combining EV manufacturers, energy companies and parking companies and building up the integrated operational capacity of vehicle, charging and parking.
In the context of ecosystem operation, this combination of “hardware + software” connects the vehicles, drivers, service providers and hardware to maximize their value. With the Le Cloud platform, the information of the vehicles, the trip and the driver is recorded more accurately in real-time; the vehicles on the platform may join or exit freely at any time and can charge at any parking and charging point; any vehicle in the data base will be automatically identified when it enters any of the partnering parking structures. The parking fee will then be calculated, settled and deducted automatically. The platform will also put discounts on idle vehicles to attract usage.
LeShare hopes not only to build a time-share platform, but also an EV sharing ecosystem. After the integrated operation capacity of vehicle, charging and parking is in place, LeShare will open its access to private cars, including the parking platform, parking lots and vehicle database, making it a real sharing platform.