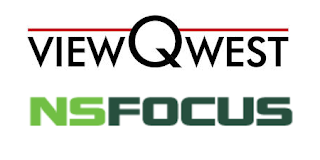 Singapore (26th April,
2016) –
ViewQwest today launched their DDoS Protection Service that defends the
networks of banks, e-commerce vendors, telcos and just about any business with
an online presence against the increasingly malicious and debilitating DDoS
(Distributed Denial-of-Service) attacks.
Powered by enterprise
security specialist NSFOCUS, the new service aims to make premium-grade
Internet security more affordable for businesses and even governments which are
increasingly beefing up their IT infrastructure to defend against this rising
Internet menace.
Increasingly,
businesses and government in the region are going beyond getting plain-vanilla
Internet access to “clean-pipes” which are premium Internet lines with built-in
tech that can automatically identify malicious DDoS traffic in the networks and
filter them to “scrubbing centres” to take away the nefarious packets before
sending the good packets back to the user.
ViewQwest offers
cloud-based and provider-based DDoS mitigation to all businesses. ViewQwest’s
DDoS Protection Service starts from $699 per month, the most affordable in
Singapore.
Mr. Vignesa Moorthy,
CEO of ViewQwest, said: “Singapore is the regional hub for e-commerce and
online services. With this partnership, we aim to offer premium-class DDoS
mitigation to protect these websites at prices that they can afford to help
boost Singapore’s position as the leading online services hub in this
region.”
DDoS attacks – where
hackers paralyse websites by overwhelming them with web traffic, often using an
army of infected computers from all over the world – have become more frequent
and destructive over the last few years. Experts believe that the DDoS attack
on the BBC website at the end of last year may have been the largest recorded
attack in history, hitting the 600Gbps mark.
Mr. Allan Thompson,
COO of NSFOCUS said: “DDoS attacks are moving away from being just
nuisance attacks to becoming a decoy that precedes more malicious attacks, such
as stealing confidential information.”
DDoS attacks show no
sign of slowing down because the barrier to entry to launch a DDoS attack is
very low. DDoS attacks are not expensive to launch, costing as little as
US$25 per hour for 1000 compromised computers to attack a single victim.
###
About ViewQwest DDoS
Protection Service
Up-to-date and
equipped to fight volumetric and application-targeted DDoS attacks, ViewQwest’s
DDoS Protection Service actively monitors for unusual activity and diverts
suspicious traffic to its scrubbing centre to filter real users from bots.
After identifying DDoS attacks in real-time, a trigger is sent to drop the
malicious traffic so business operations can continue smoothly.
•      Comprehensive Layers 3
and 7 Protection
•      On and Off-premise
Protection
•      Proactive threat
mitigation
•      Extensive
Service-Level Agreements
•      Real-time analytics
portal for customers
About ViewQwest
Since 2001, ViewQwest
has been an information and communications technology company that provides
premium communications services. ViewQwest is dedicated to providing superior
speeds on a high performance network and fanatical customer service. ViewQwest
offers tailored solutions to businesses including dedicated and broadband
Internet access globally, layer 2 Ethernet connectivity solutions, DDoS
protection, data centre services and other various managed services.
ViewQwest today counts many Fortune 500
corporations and Top 500 Small and Medium Enterprises in South-east Asia as its
clients.
About NSFOCUS International
Business (IB)
NSFOCUS IB is a wholly
owned subsidiary of NSFOCUS, an enterprise network security provider, and is
expanding operations in the Americas, Europe, the Middle East, Southeast Asia
and Japan. The company is building on 15 years of proven success, innovation and
trust, with offerings protecting four of the world’s five largest banks, as
well as organizations in insurance, retail, healthcare, critical
infrastructure, and government. Enterprise and carrier-grade products undergo
rigorous evaluation and testing to Veracode VL4 certification, delivering
powerful and effective threat management combined with advanced data analytics and
intrusion prevention and detection capabilities. A research arm,
the NSFOCUS Security Labs, is a renowned technical research center that tracks
and analyzes global intelligence while identifying new network vulnerabilities
and security trends. NSFOCUS IB has technology and channel partners in more
than 60 countries, and is a member of the Microsoft Active Protections Program
(MAPP), StopBadware.org, and the Cloud Security Alliance (CSA).

LeEco achieves sales of 1.22 Billion RMB in 2 hours, with 1 million Superphones sold out