Techventure 2015 catalyses tech deal flows and Series A discussions
Singapore, 13 October 2015 – Techventure 2015 was one of its most successful editions yet. More than 1,300 local and international participants registered for the two-day event, comprising 164 startups and 59 investors from 13 countries. The exhibition space teemed with more than 50 single startup booths and 19 organisational pavilions, adding to the buzz. 135 targeted meetings were facilitated amongst over 24 investors and 66 startups and some of these have led to deal flow and Series A discussions. 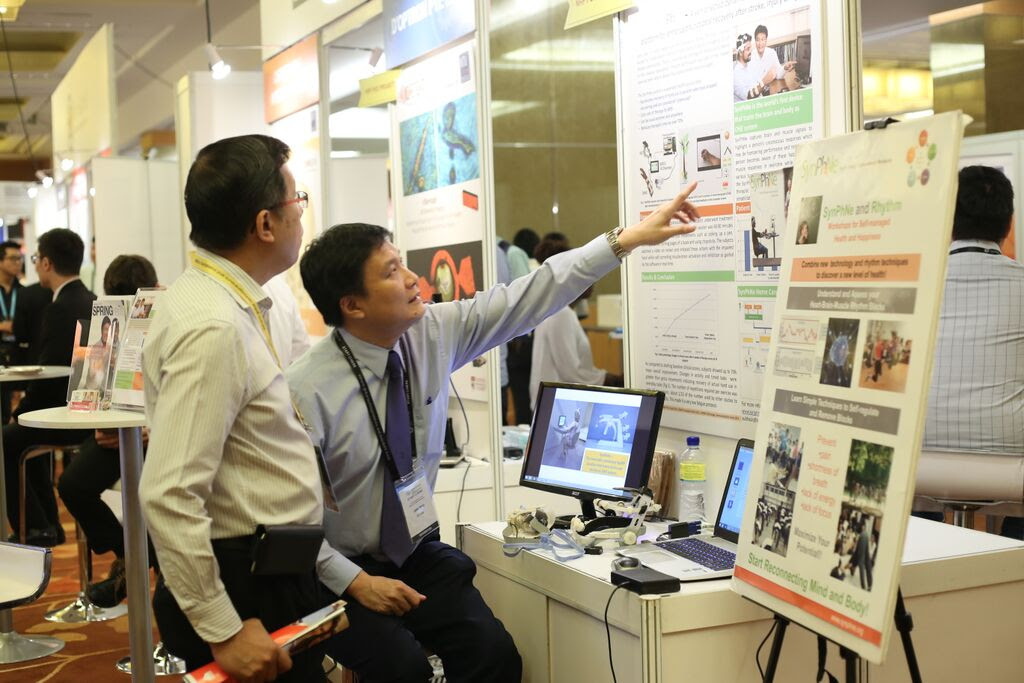 Photo credit: Techventure 2015 / National Research Foundation
Themed Start Here – where global technopreneurs and investors meet, Techventure was officiated by Dr Vivian Balakrishnan, Minister for Foreign Affairs and Minister-in-Charge of the Smart Nation initiative. In his opening address, Dr Balakrishnan spoke about how events like Techventure promoted Singapore’s economic development, “Techventure plays an important part by providing an open platform to exchange ideas and promote innovation. By catalysing more innovative companies and strengthening our innovation ecosystem, we can help companies deliver more value and support Singapore’s transition to an innovation-driven economy. Going forward, we will sustain our efforts to translate ideas and innovations into products, services and businesses that benefit people and create good jobs for Singaporeans.”
A line-up of international panellists discussed global trends in technopreneurship, what investors look for in startups, and how incubators and accelerators can help startups grow. International speakers included Andrew Hessel of Autodesk, Cédric Giorgi of SIGFOX, Chris Wade from Octopus Ventures, Duncan Irschick from University of Massachusetts Amherst, Foo Jixun from GGV Capital, Richard Webb of Start Mesh, Paolo Borella of Vertical Accelerator, Phil Chen from HTC and Tim Lafferty of Mawsonia. Successful startups from Singapore, including Mr Lu Yoh-Chie from Biosensors and Klaudyne Hong from Peach IntelliHealth shared their experiences on the SG Tech Can Lah! panel.
Diverse technologies from a wide range of organisations was showcased – from engineering and advanced manufacturing to clean energy and water technology, and from biotechnology and medical technology to infocomm and media technology. Country pavilions included Australia, Malaysia, Russia, Taiwan, and the United Kingdom.
One of the main highlights at Techventure was the Techventure International Startup Challenge, in which  13 local and international teams vied for the top prize of S$50,000 and second prize of S$10,000 and incubation space at the upcoming A*StartCentral . Singapore’s Igloohome, a software company that enables short term rental hosts and managers save costs via innovative smart home technologies and data analytics, walked away with the top prize as well as the Global Brain Award to compete at another platform in Tokyo.  Easyship, an intelligent on-demand pick, pack and shipping startup from Hong Kong was runner-up.
Anthony Chow, the founder of local startup Igloohome, was thrilled about the win. He said that this award will help in the company’s plans for growth and facilitate Beta trials for their new customers, “Winning the Techventure International Startup Challenge validates our technology. It shows that we have a solution that our customers want as it solves their pain points.”
Techventure seeks to promote deal flows between investors and startups through targeted facilitation of one-to-one meetings. Startup fast pitches were well-attended throughout both days and the organisers pre-arranged and tracked meetings between investors and startups.
“Techventure was better than we expected,” said Maxim Thaw Tint, CEO of GTRIIP, a startup company based in Singapore and California. “This is a truly global event with startups, venture capitalists (VCs) and investors coming from all over the world. We have already been in touch with several VCs and investors, which could potentially lead to series A funding.”
Techventure is set to return in 2016, featuring partner events and anchored by top investors and technopreneurs who will helm exciting discussions on the development of the global startup ecosystem. For more information and to register, visit www.techventure.com.sg.