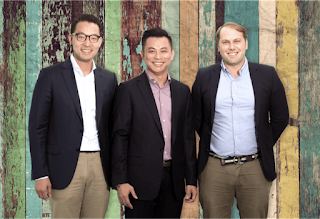 Today, Venturra Capital, an independent VC fund sponsored by the Lippo Group, announces the launch of its USD150 million Venturra Capital Fund I, led by its three Managing Partners Rudy Ramawy, Stefan Jung, and John Riady.
Our mission at Venturra is to provide capital, operational empowerment, and market access to founders of innovative, industry-transforming, technology-enabled internet businesses. Venturra Capital will focus on Indonesia and Southeast Asia, and will invest in early growth stage consumer technology-enabled companies including in the eCommerce, financial services, healthcare and education sectors.
The Venturra partnership brings together a strong track record in technology investments and building companies in a broad range of industries. Previous investments by our Managing Partners include GrabTaxi, Traveloka, Bridestory, Munchery, HappyFresh, MatahariMall.com and many other successful startups. “We are extremely excited to working with great entrepreneurs at Venturra and to contribute towards a dynamic and rapidly growing digital ecosystem in the region,” comments Managing Partner Rudy Ramawy, who prior to joining Venturra was founding Country Director of Google Indonesia, and currently also serves on the board of MatahariMall.com.
With USD150 million in committed capital, Venturra seeks to invest in what is arguably the most rapidly developing technology ecosystem backed by a breadth of favorable long term macroeconomic drivers.
Managing Partner Stefan Jung, who in his prior role as Founder & Managing Partner of Rocket Internet Southeast Asia witnessed the emergence of the tech and digital ecosystem, comments “We have seen tremendous progress in the technology industry across SEA over the last years — the quality of entrepreneurs and investors is increasing at a fast pace.  We want to work with outstanding entrepreneurs to create defining market leaders across the region and bring in our experience and expertise in scaling companies internationally”.
Venturra will also enjoy a unique relationship with the Lippo Group. As a sponsoring limited partner of the fund, and one of the largest and most diversified consumer services groups in Indonesia, Lippo will provide unparalleled access to a broad range of industries, a regional network of business, and a stable of corporate leaders.  Venturra will combine its independence and this unique access to build partnerships that empower founders and enable portfolio companies to scale quickly and gain traction, thus generating consistently strong returns for our investors.  Lippo’s portfolio of technology investments under Lippo Digital Ventures (LDV) will also be merged with Venturra Fund I.
Asked about the Fund’s aspirations, Managing Partner John Riady, who is also a Director of the Lippo Group commented: “Our vision at Venturra is to partner with the best entrepreneurs for generations to come — and in doing so, over time create a culture and an institution that will allow us to be a leading venture capital fund.  80 years from now, we want to look back, point to some of the most transformative companies in the region, and say that we played a part in contributing to their successes. The Southeast Asian markets are some of the most promising economies in the world with some of the best entrepreneurs globally. ”
About us
Rudy Ramawy: Rudy was previously the Country Director of Google Indonesia, which he established and led since January 2012. Prior to joining Google, Rudy was the Director of Programming and Production at RCTI, Indonesia’s leading television station, which he joined in 2008, first as Director of Sales and Marketing. Rudy started his career in 1994 with Procter & Gamble. In 1997, he was one of the key persons in the startup team of Sony Music Entertainment Indonesia, where he was Director of Marketing and Sales. He was then appointed Managing Director of Warner Music Malaysia in 1999, based in Kuala Lumpur. In 2003 he returned to Indonesia to lead Sony Music Entertainment as President Director of Indonesia, and also served as Regional Managing Director of Southeast Asia. In 2005, Rudy held the post of Director and Chief Marketing Officer at Natrindo Telepon Seluler (Axis), a mobile operator in Indonesia. Rudy holds a Chemical Engineering degree from the University of California, Berkeley.
Stefan Jung: Stefan previously was a Partner at Monk’s Hill Ventures and Co-Founder of HappyFresh, an on-demand grocery delivery service in SEA, before the launch of Venturra. Furthermore Stefan was Founder and Managing Director of Rocket Internet Southeast Asia, where he co-founded Zalora, Lazada and FoodPanda and also was a Venture Partner at Global Founders Capital, Rocket’s early stage VC fund. Before that Stefan was a strategy consultant at The Boston Consulting Group and Bain & Company. Stefan obtained his Bachelor degree from a global program from the Copenhagen Business School, University of North Carolina at Chapel Hill and Tsinghua University in Beijing and his MBA from London Business School.
John Riady: John Riady is currently Director of the Lippo Group, Professor of Law at Pelita Harapan University (UPH), and Editor at Large at BeritaSatu Holdings. John is also leading Lippo’s push into the digital economy, having started MatahariMall.com.  John received his B.A. in Political Philosophy and Economics from Georgetown University, his M.B.A. from the Wharton School of Business, and a Juris Doctor (J.D.) from Columbia University. He is a member of the NY Bar Association and serves on the Columbia University International Advisory Board, and the World Economic Forum (WEF) Global Agenda Council on Southeast Asia.
Lippo Group: Founded by Dr. Mochtar Riady, Lippo is a pan-Asian group with investments in real estate, department stores, food retailing, financial services, telecommunications, hospitality, healthcare, news media, and IT services. Over the past 60 years, it has established a model for growth, innovation and leadership in industries and new markets.  Lippo’s education foundation manages 52 schools and two universities, including Indonesia’s leading private university. Lippo’s healthcare initiative manages Indonesia’s largest healthcare group, comprising of 22 hospitals across the Indonesian archipelago, including Indonesia’s leading world-class cancer treatment hospital. Lippo is dedicated to its vision of “Growing in Stewardship, Transforming Lives”.