RAZER TO
BRING FULL SPECTRUM GAMING TO COMEX 2015
Razer Fans
will get to experience the latest as-yet unreleased products at Singapore’s
biggest IT Exhibition
WHAT:            Razer will be setting up a booth at Comex
2015 at Suntec City Singapore from 3 September to 6 September 2015. The Razer
booth will feature several all-new products that have never been seen in
Singapore before.
Among the featured products
is the Razer Mamba Chroma Tournament Edition Gaming mouse, the world’s most
precise gaming mouse. The Mamba Tournament Edition will be part of a full
gaming set up and visitors will get to see its performance as well as how it
works and integrates with other Chroma products such as the BlackWidow Chroma
gaming keyboard, the Firefly Chroma gaming mouse mat, and the Kraken 7.1 Chroma
gaming headphones.
Visitors will also get to experience
the much-awaited Razer Nabu, the world’s first social smart band, as well as
the Razer Wildcat for Xbox One, a tournament level console gaming controller. Also
on display will be Razer’s recently announced camera for VR and Game Streamers,
using Intel’s® RealSense™ Technology.
WHY:               Razer wants to give fans a
first look at the latest and greatest Razer products to hit Singapore’s shores.
The Razer booth at Comex 2015 will give gamers a chance to not only see the
products, but also to have a hands-on experience with them.
WHEN:                        September 3, 2015 to
September 6, 2015
WHERE:           Suntec Singapore
Convention & Exhibition Centre, Level 6, Booth 6110 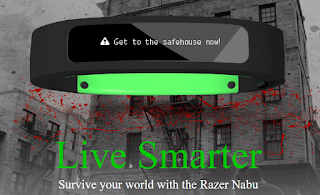 Shoot in Style with the Lenovo VIBE Shot