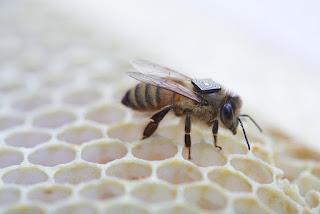 Singapore, Aug 26, 2015 – Intel Corporation today announced a world-first collaboration with CSIRO, Australia’s national science agency, which will see Intel technology play an integral role in investigating honey bee health to secure global food supply.
The Intel® Edison Breakout Board kit, a customisable compute platform, slightly larger than a postage stamp, will be distributed by CSIRO to research partners worldwide in the form of a bee micro-sensor kit as part of the Global Initiative for Honey bee Health (GIHH). Included in the micro-sensor kit, the Intel Edison board will be placed inside beehives to monitor bee activity via tiny Radio Frequency Identification (RFID) tags that are placed on the bees’ backs.

The sensors work in a similar way to a vehicle’s e-tag, recording when the insect passes the Intel Edison board as the checkpoint. Data captured by the RFID tag reader and additional environmental sensors attached to the Intel Edison board will provide valuable information to beekeepers, primary producers, industry groups and governments. This information will inform how best to protect the honey bee health population, which we rely on to pollinate one third of the food we consume.

“Gordon Moore, co-founder of Intel, predicted the number of transistors on a computer chip would double every year,” said David Mellers, Enterprise Solutions Sales Director of Intel Australia and New Zealand.
“This prediction became a driving force for the industry, enabling us to continuously shrink technology and make it more power efficient. This in turn allowed us to rethink where and in what situations computing is possible. Moore’s Law doesn’t just drive technological change, it also creates huge economic value and social advancement, and this implementation of technology as part of the GIHH highlights just that,” said Mellers.
“Bee colonies are collapsing around the world and we don’t know why,” said Professor Paulo de Souza, Office of the Chief Executive Science Leader, Digital Productivity Flagship, CSIRO. “Due to the urgent and global nature of this issue, we saw the need to develop a methodology that any scientist could easily deploy. This way we can share and compare data from around the world to collaboratively investigate bee health. This united effort is a fantastic example of the Internet of Things.
“The Intel Edison Breakout Board kit is the perfect platform for this type of research. It’s incredibly reliable, small in size, flexible with programming, and has low power consumption. It’s also easily customisable which means that if a scientist has a sensor they would like to add, they can virtually plug in and play,” said de Souza.
The role of the Intel Edison Platform
Intel Edison Breakout Board kit captures data from the hive and sends the information remotely to CSIRO’s Data Access Portal. Researchers use the signals from the sensors attached to the Intel Edison to build a comprehensive 3D model and visualize how the bees may be moving through the landscape. This gives researchers insights into bee movement, behaviours and responses to stressors that affect bee health and pollination.
In addition to monitoring bee activity, the Intel Edison board will also gather environmental information, including humidity surrounding the hive, temperature and solar radiation.
This methodology was initially used by the CSIRO in Hobart, Tasmania, where more than 10,000 sensors are now fitted to the backs of bees. Following on from the success of that project, the CSIRO is now seeking collaboration from across the world to make this a global research effort.
A fact sheet on the Intel technology used in the project is available here
Images of the Honey bees and Intel Edison are available here.
B-roll, audio and video grabs and additional information from CSIRO is available here.
The Global Initiative for Honey bee Health (GIHH)
Led by CSIRO, the GIHH is an international alliance of researchers, beekeepers, farmers, industry, and other technology companies that aims to better understand the drivers of Colony Collapse Disorder (CCD), a condition decimating honey bee populations worldwide.
The GIHH will provide members with micro-sensor kits to integrate into their research programmes and investigate, in a coordinated way, the many factors that influence hive health. The CSIRO will analyse the data in order to understand optimal productivity conditions and further its knowledge of CCD.
More information on the CSIRO’s GIHH is available here:  https://research.csiro.au/gihh