This evening, power users and the local tech media was invited to a launch party at Sopra Cucina & Bar by AMD. AMD was taking the opportunity to introduce users to their latest and greatest graphics card that they have just released for the market, specifically the R9 3XX series and of course putting much focus on the AMD FURY series. 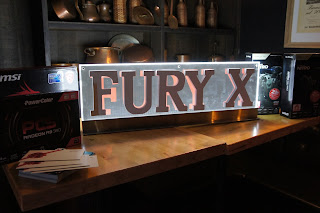 With the newly launched AMD Radeon R9 Fury X Graphics Card, AMD is finally getting back into competition. It has been quite some time since we spotted something worth mentioning and worthy to be called a “significant technology advancement”. AMD was the first to used GDDR5 memory, way ahead of competition. Today, AMD has also innovated at the memory area of the graphics card and is the first to introduce their High Bandwidth Memory (HBM) technology. With HBM, GPU processing will get so much more efficient, deliverying more than four times the bandwidth per watt over GDDR5. Most definitely, we will be seeing such technology in all the high end graphics card from AMD in the future. 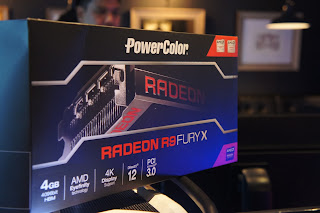 The main highlight of the show was the PowerColor Radeon R9 Fury X which was shown live in a demo setup. This runs on AMD’s reference design, and is by default watercooled. Despite of the stacked video graphics placed on chip next to the GPU which causes a concentrated heat radiating area, the water cooling solution tackles this issue successfully. This way, the card can remain short in terms of physical length, and runs cool during processing graphics intensive games.

Other than the FURY X, many other R9 3XX series cards from different manufacturers were also showcased, highlighting the differences in individual brand’s design and cooling features. 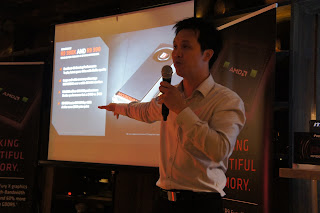 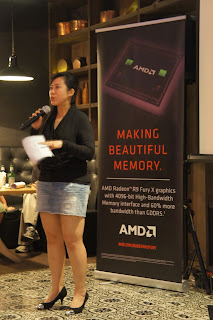 The event started off with a simple introduction from the local marketing manager and product manager and ended off with an impromptu competition which gave participants a chance to win the latest AMD graphics card. Feeling ambitious, I decided to give it a try. My personal testimonial for AMD graphics card, specifically for AMD HBM technology is that they are finally doing something to live up to their own name.

~The Radeon R9 FURY X has finally made AMD what it means by “Advanced Micro Devices” again. HBM is definitely something that is seen as more advanced than competitors.

I bet that everyone who attended the event enjoyed as much as I did! It has been quite some time since I’ve been back in the local tech scene. Of course, do look out for more interesting news and information regarding the new AMD Radeon R9 FURY X from us! We hope that we will get our hands on the R9 FURY X soon for a rundown of its performance. Until next time, ciao! 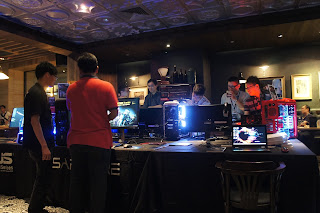 Special thanks for AMD SG team for the wonderful event and comprehensive information and guide on the new AMD graphics card.