Intel CEO Outlines Future of Computing
Announces Wearable Collaboration with Oakley* and Intel® Curie™,
a Tiny, Button-Sized Product to Enable Wearable Solutions
Intel Plans to Invest $300 Million to Encourage More Diversity at Intel and within the
Tech Industry, Announces Hiring and Retention Goal
INTERNATIONAL CONSUMER ELECTRONICS SHOW, Las Vegas, Jan. 6, 2015 – Intel Corporation today announced a number of technology advancements and initiatives aimed at accelerating computing into the next dimension. The announcements include the Intel® Curie™ module, a button-sized hardware product for wearable solutions; new applications for Intel® RealSense™ cameras spanning robots, flying multi-copter drones and 3-D immersive experiences; and a broad, new Diversity in Technology initiative, which includes a $300 million investment to encourage more diversity at Intel and within the technology industry at large.
“The rise of new personal computing experiences, intelligent and connected devices, and the wearable revolution are redefining the relationship between consumers and technology,” said Brian Krzanich, Intel CEO. “Our goal with Intel technology is to help solve real problems and enable experiences that are truly desired by people and businesses. In order to do this, we must also do more to lead the growth of diversity and inclusion within the technology industry. Women and under-represented minorities will continue to play a greater role as consumers, influencers, creators and leaders.”
Krzanich made the announcements during a keynote address at the 2015 International Consumer Electronics Show. He also unveiled a wearable device collaboration with Oakley*, a leading product design and sport performance eyewear brand, a 3-D collaboration with HP*, and highlighted True Key™, a new cross-platform application by Intel Security that uses personal factors like the face, device or fingerprint to make logging in easier and safer. 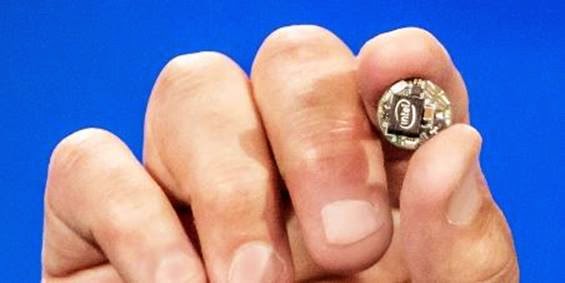 The Wearable Revolution
The growth of wearable technology is creating a new playing field for innovation. Krzanich disclosed plans for the Intel Curie module1, a tiny hardware product based on the company’s first purpose-built system-on-chip (SoC) for wearable devices. The module is scheduled to ship in the second half of this year and includes the Intel® Quark™ SE SoC, Bluetooth low-energy radio, sensors and battery charging.
Intel has been actively pursuing the wearable technology segment, and since Krzanich revealed several projects here last year, the company has announced multiple products and initiatives with different fashion, fitness and lifestyle brands. These efforts include Basis Peak*, Fossil Group*, Luxottica Group*, MICA and Opening Ceremony*, SMS Audio*, and the Intel “Make it Wearable” challenge.
Building on this work, Intel and Oakley today announced a strategic wearables collaboration. Oakley is the first Luxottica Group brand that Intel is working with to fuse premium, luxury and sports eyewear with smart technology. Krzanich was joined on stage by Colin Baden, CEO of Oakley, who said the companies are working on an intelligent product, available later this year, designed to enhance athletes’ performance.
Krzanich also highlighted Nixie*, the 2014 “Make it Wearable” challenge winner and the first wearable camera that can fly. Nixie rests on your wrist like a bracelet, then unfolds and takes flight on cue to take the perfect shot of you in the moment. Krzanich welcomed Nixie founders Christoph Kohstall and Jelena Jovanovic to the stage to discuss the Intel “Make it Wearable” challenge and highlighted the opportunity it offers to innovators and entrepreneurs. Krzanich and the founders also posed for the first Nixie flying photo. Krzanich went on to say that Intel will sponsor the Intel “Make it Wearable” challenge again later this year.
Accelerating Diversity in Technology
Krzanich, who acknowledged a recent confluence of events related to women and under-represented minorities, announced the Diversity in Technology initiative.
To support this initiative, Intel has set a bold new hiring and retention goal to achieve full representation of women and under-represented minorities at Intel by 2020. Full representation means Intel’s U.S. workforce will be more representative of the talent available in America, including more balanced representation in senior leadership positions.
Intel also plans to invest $300 million to help build a pipeline of female and under-represented engineers and computer scientists; to actively support hiring and retaining more women and under-represented minorities; and to fund programs to support more positive representation within the technology and gaming industries.
“We’re calling on our industry to again make the seemingly impossible possible by making a commitment to real change and clarity in our goals,” said Krzanich. “Without a workforce that more closely mirrors the population, we are missing opportunities, including not understanding and designing for our own customers.”
Intel plans to engage with several partners in the industry to support, enhance or create new programs for this initiative, including the International Game Developers Association*, the E-Sports League*, the National Center for Women in Technology*, the CyberSmile Foundation*, the Feminist Frequency*, and Rainbow PUSH*. The company also plans to deepen its engagement with primary education programs focused on underserved areas and expanding its collaborations with computer science and engineering programs at higher education institutions, including minority-serving institutions.
Computing Unleashed
Up until now, computing has largely been defined by human interaction with a screen, keyboard and mouse. Krzanich highlighted several new technologies and real-world applications that will usher computing into a 3-D world and also free the experience from wires and passwords.
Krzanich demonstrated a range of capabilities that will be introduced in products by the end of the year, including True Key, a newly announced cross-platform application by Intel Security to address the hassle of passwords. The True Key application uses personal factors like the face, device or fingerprint to make logging in easier and safer. True Key is supported on iOS*, Android*, Windows*, Mac*, and across all your favorite browsers. It will also be preinstalled on devices from HP* and Lenovo* and a part of McAfee LiveSafe in the coming months. Visit www.truekey.com for access to the limited release of True Key.
Krzanich also highlighted new wireless charging collaborations including Hilton*, Jaguar Land Rover*, San Francisco International Airport* and Marriott*. These collaborators are planning wireless charging pilots, development and deployments including Marriott, which plans to pilot wireless charging capabilities across the Marriott portfolio of brands, including JW Marriott*, Marriott, Renaissance*, Courtyard* and Residence Inn*.
Intel’s CEO said Intel RealSense cameras and new immersive applications can be found in a growing number of 2 in 1s, tablets, notebooks and all-in-one PCs, including many powered by the new 5th generation Intel® Core™ processors available this quarter. Additional commentary on new innovations enabled by Intel RealSense technology and cameras is available here.
As computing moves further into the third dimension, Krzanich welcomed Dion Weisler, executive vice president of HP’s printer and personal system’s business. Weisler discussed how HP is working to enable a blended reality ecosystem and announced that the Intel® Core™ i7 processor will power the company’s forthcoming HP Multi Jet Fusion technology, engineered to resolve critical gaps in speed, quality and cost. Weisler said the added performance and scale of Intel’s technology is critical to realize the full potential of 3-D printing.
Intelligence Everywhere
Krzanich highlighted a number of areas where the rise of connected computing intelligence is helping to reshape many facets of people’s daily lives. He showcased practical, real-world examples for robots and multi-copter drones and said that Intel RealSense cameras can provide intuitive, sight-based collision avoidance capabilities for solving complex problems. For example, Ascending Technologies* is targeting to use Intel RealSense cameras to develop intelligent and safer multi-copter drones, and iRobot* is collaborating with Intel to explore this technology for its intelligent robotic platforms.