ASUS Releases ROG G20 with Latest NVIDIA® GeForce® GTX 970 Graphics Card
The award-winning small form factor gaming desktop is now equipped with the latest GTX900 series graphics for better and faster gaming experience
Singapore (7th January, 2014) — ASUS, a global leader in the new digital era, today announces an updated version of its first small form factor gaming desktop, the ROG G20, which is now refreshed with the latest NVIDIA®GeForce® GTXM 970 graphics card. The ROG G20 is a compact 12.5 litre case housing an Intel® Core™ i7 processor. Equipped with a dual-fan function, it provides top notch gaming performance with efficient heat management. It is retailing at $2,699 with any purchase NVIDIA® GeForce® GTXTM 970 receiving a complimentary Assassin’s Creed Unity game (worth $74.90) while stocks last. It is available from today at all ASUS retailers and dealers.
Having won numerous awards such as the Best Choice of the Year Award and Best Choice Golden Award at Computex, Taiwan, the award-winning small form factor gaming desktop, the ROG G20, is capable of strong performance. The ROG G20 takes on the advantage of a natural convection thermal design that has a hidden airflow tunnel featuring efficient heat management and near-silent operation, measuring 25dB at idle. It has customisable lighting effects, to showcase up to eight-million colours to match any mood. It also features the ASUS-exclusive Aegis application for monitoring system performance through a gamer-friendly user interface. 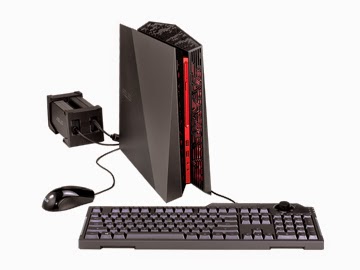 Gamer-Centric Design and Feel
The ROG G20 takes on an Avant-garde design for its system, with aggressive lines that boldly represents the lean mean machine. On the outside, G20 sports a bold design boasting a matte-black finish and aggressive lines. The Mayan-inspired markings and customisable lighting effects showcasing up to 8 million colours, reflects the feel of any game you are playing to take your gaming experience to a whole new level.
Vivid Gaming Visuals and Optimised Online Play
Experience the most astounding visuals with the latest NVIDIA® GeForce® GTXTM 970 graphics. ROG G20 draws you into an immersive world of colours and visuals in WQHD 2560 x 1440 resolution, letting you play games at their highest settings on up to four monitors. Giving you an added dimension to gaming with NVIDIA 3D Vision Surround, the ROG G20 brings a fully immersive, stereoscopic 3D experience to you. It gives you the power to take on the most demanding of tasks, allowing you to play games at their highest settings, watch videos in 4K UHD and even create awesome websites and 3D models for work.
High Levels of Gaming Performance
The ROG G20 houses an Intel® Core™ i7 processor and an NVIDIA® GeForce® GTXTM 970 graphics card that provides an undisruptive HD-gaming performance and entertainment for every gamer. The ASUS-exclusive Aegis application lets you monitor the performance by tracking the CPU, memory usage, internet download and upload status. You can even set temperature and voltage thresholds and leave the system to maintain them automatically.
Near-Silent Operation and Efficient Heat Management
The ROG G20 runs on a near-silent operation at just 22dB at idle. Crafting the system with the environment in mind, the ROG G20 is built to be energy-efficient with its Eco Energy Mode running at a mere 20W, delivering energy savings of 50% better than the industry average. The ROG G20 is designed with no visible exterior side exhaust vents in order to keep the chassis’ neat, clean lines. It has a thermal design that takes advantage of natural convection, with a hidden airflow channel that ensures efficient heat management. Two internal fans further enhance heat dissipation, making ROG G20 ideal for marathon gaming sessions.
Price and Availability
The refreshed ROG G20 gaming desktop will be retailing at S$2,699 from now onwards bundled with a keyboard and mouse, with every purchase receiving a complimentary Assasin’s Creed Unity game (worth $74.90).
Specifications
Specifications, content and product availability are all subject to change without notice and may differ from country to
country. Actual performance may vary depending on applications, usage, environment and other factors.