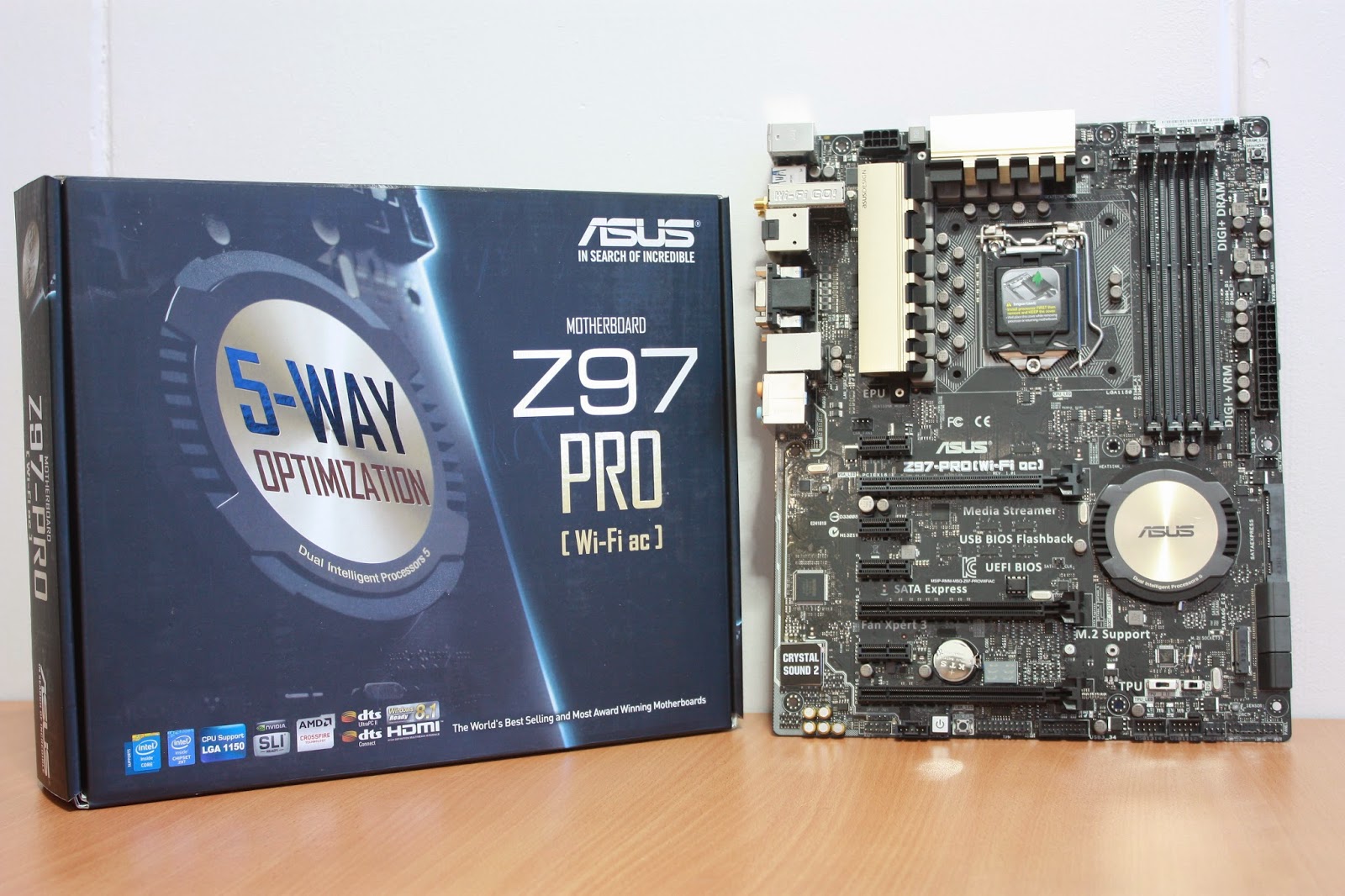 With the refresh of Intel’s motherboard chipset to include newer features, manufacturers have been churning out various motherboards to meet the requirements of different users. Other than the famous Republic of Gamers series from ASUS, ASUS has also got a whole lineup of mainstream motherboard released into the market for everyone to choose from. Today, we take a look at the new ASUS Z97 PRO (Wi-Fi ac) Motherboard to find out what difference Intel and ASUS has made to their new offerings. 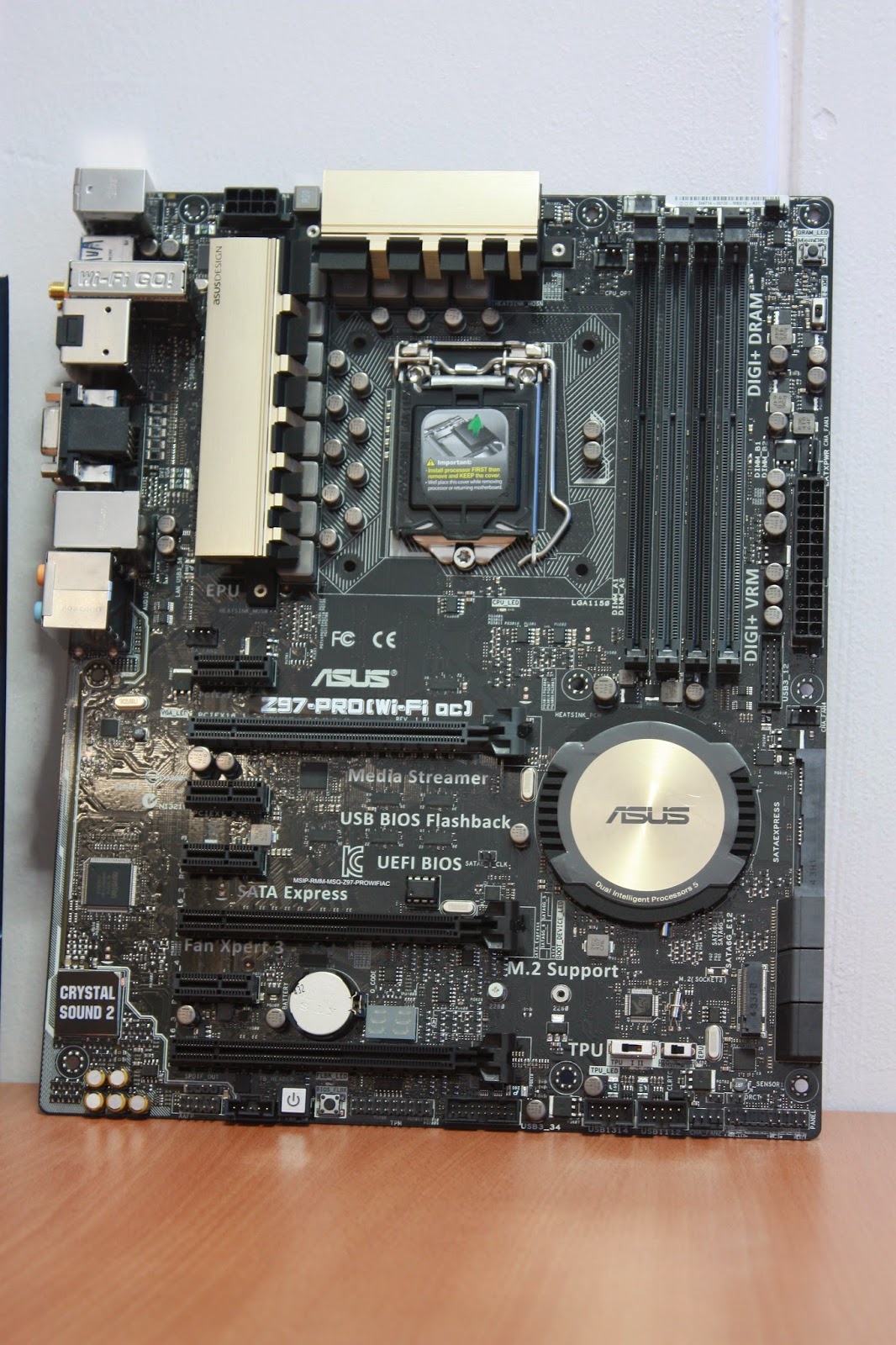 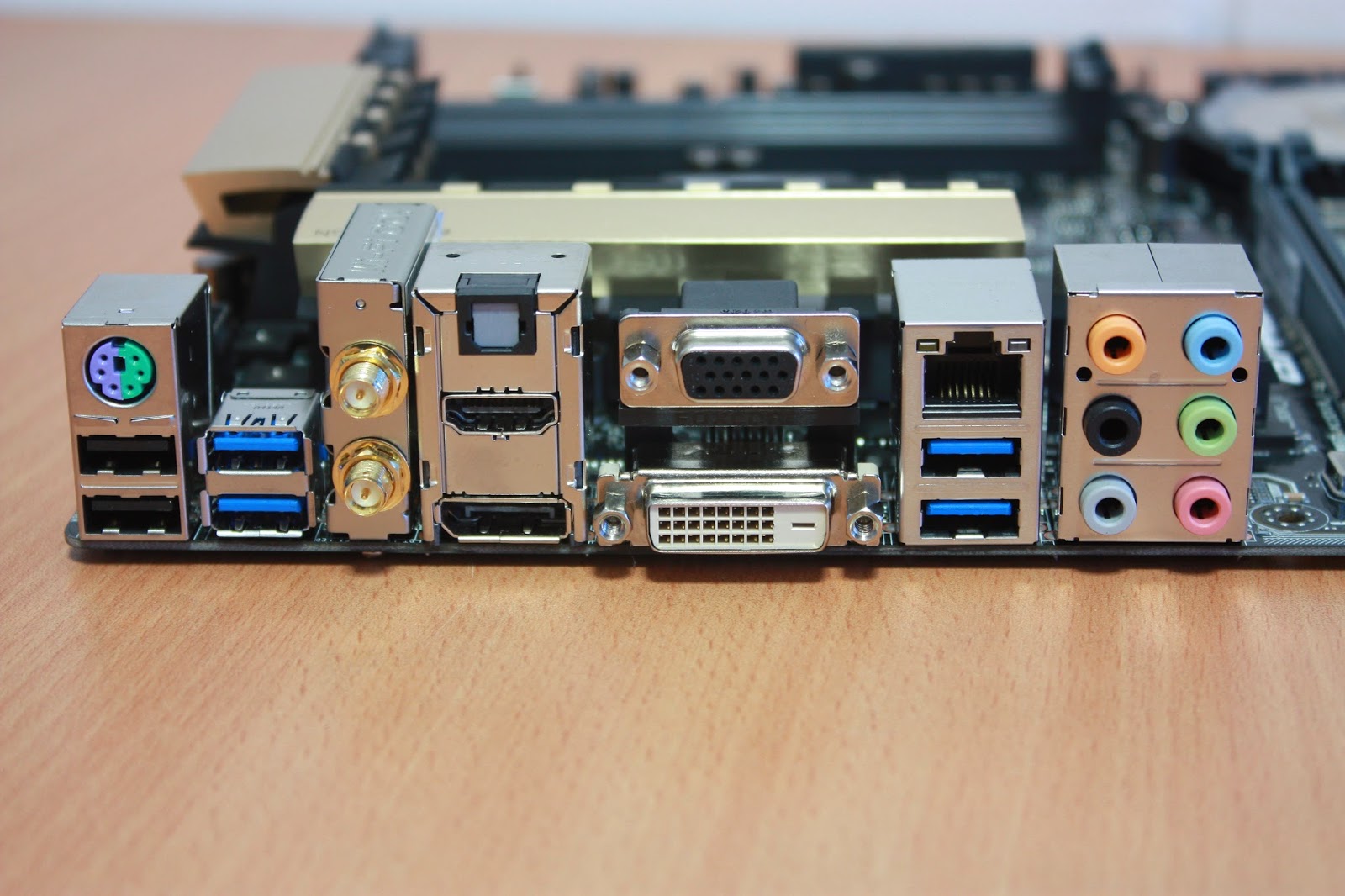 ASUS has decided to include all the possible display output ports on the motherboard which is much welcomed. This has even made multi monitor output possible just via the Intel graphics chip. However, I thought that more USB ports at the IO area would be better as almost every single PC peripheral connects via USB these days. I was also relieved that ASUS still decided to include a single PS2 port on the motherboard as PS2 port is the de facto port for ultimate gamers who wants the best gaming performance.

As we move into the era when storage drive requires more bandwidth than ever, we also see the retiring of SATA 3Gbps ports. With the release of Intel z97, we have finally let go of the previous generation SATA 3Gbps and moved on with SATA 6Gbps. Additionally, future storage interfaces are also seen on the motherboard. These feature include the new M.2 Socket 3 Port and the SATA Express port. 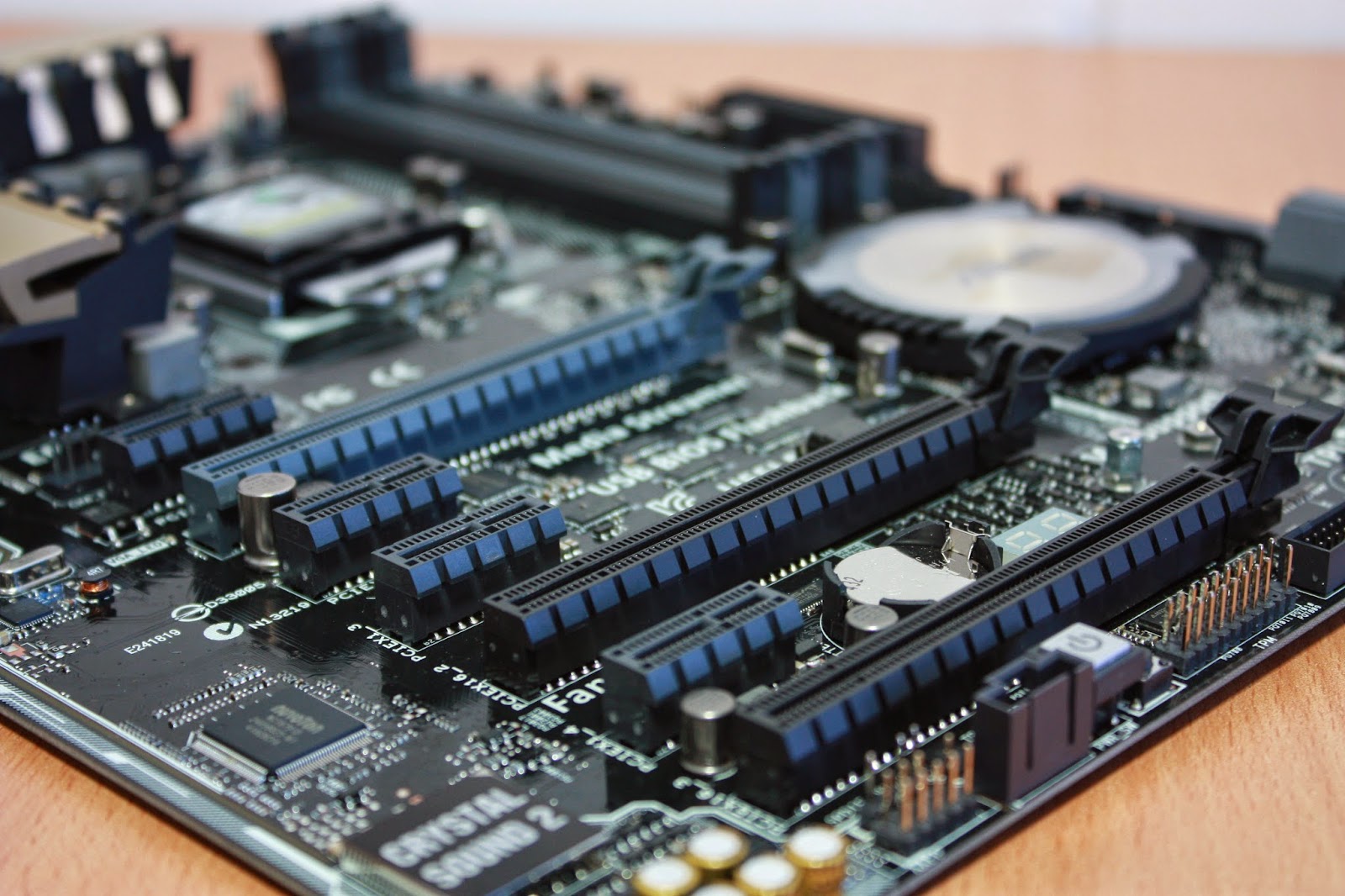 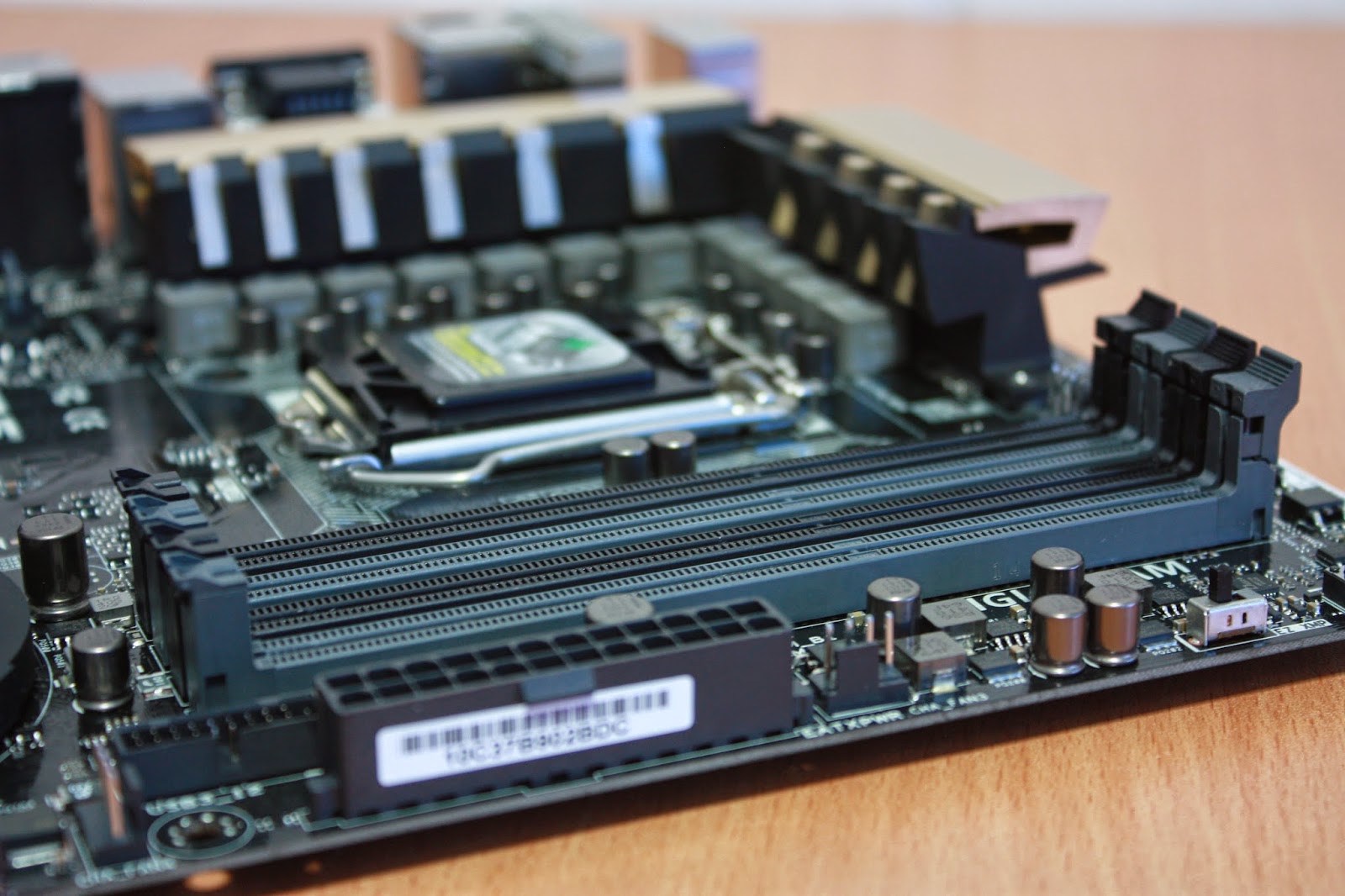 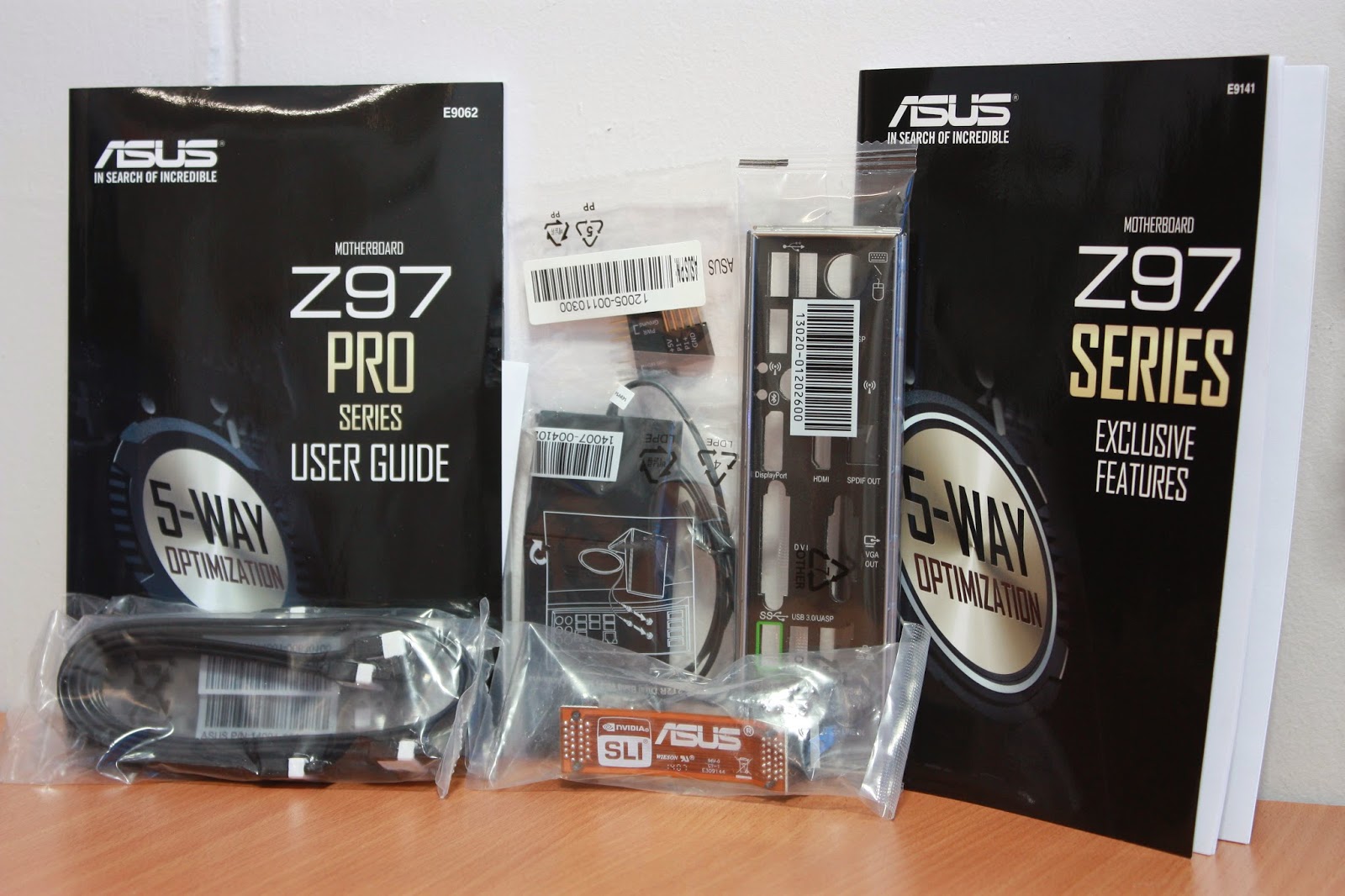 A further look at the motherboard

The main theme of a motherboard is defined by its PCB colour, VRM area heat sink and south bridge heat sink. This time, we have seen that ASUS decided to change its motherboard heatsink colour again. This could be in response to the general dislike of the gold heatsink which was used in the Z87 motherboard.

The Z97 PRO motherboard has a rather simplistic design as compared to earlier generation motherboards. The toned down gold gives the motherboard a rugged feel and the colour also blends in well with the MOSFETs and the rest of the components on the motherboard. However, I still personally preferred the striking blue that was used back in the P67/Z68/Z77 days. That colour defined ASUS motherboard. 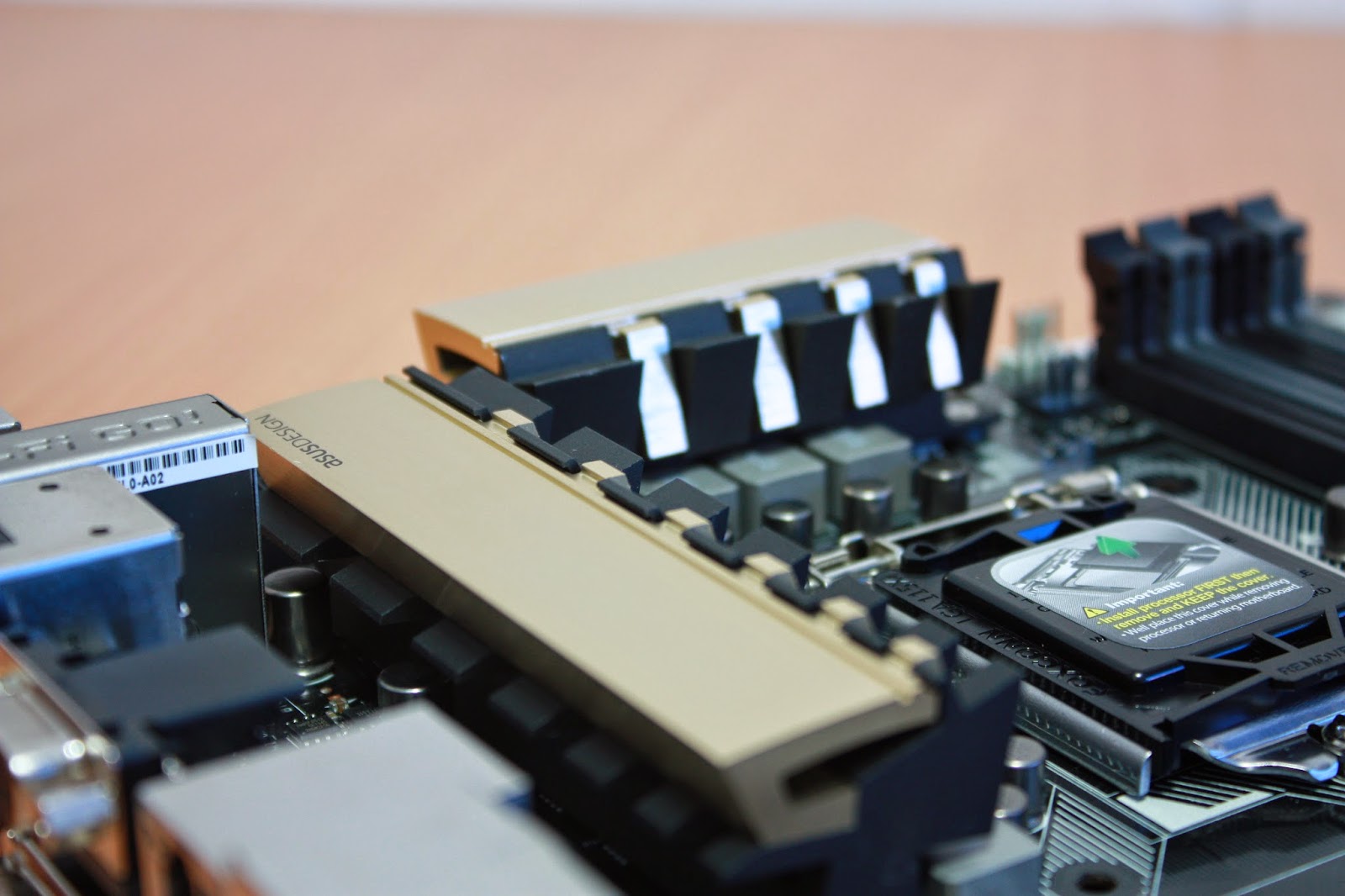 The heat sink on the motherboard are all designed by the ASUS designers and a “asusDESIGN” signature was placed on the VRM heatsink. There is a possibility that the design of the south bridge heatsink was borrowed from ASUS TUF series as there are some resemblance in the looks of it. Moreover, ASUS still insisted with ingenious product design that ensured that thermal conductivity performance is maximized. This fins on both the heatsinks will help to spread heat effectively, hopefully making the motherboard more reliable, thus giving users a chance for a higher overclock. 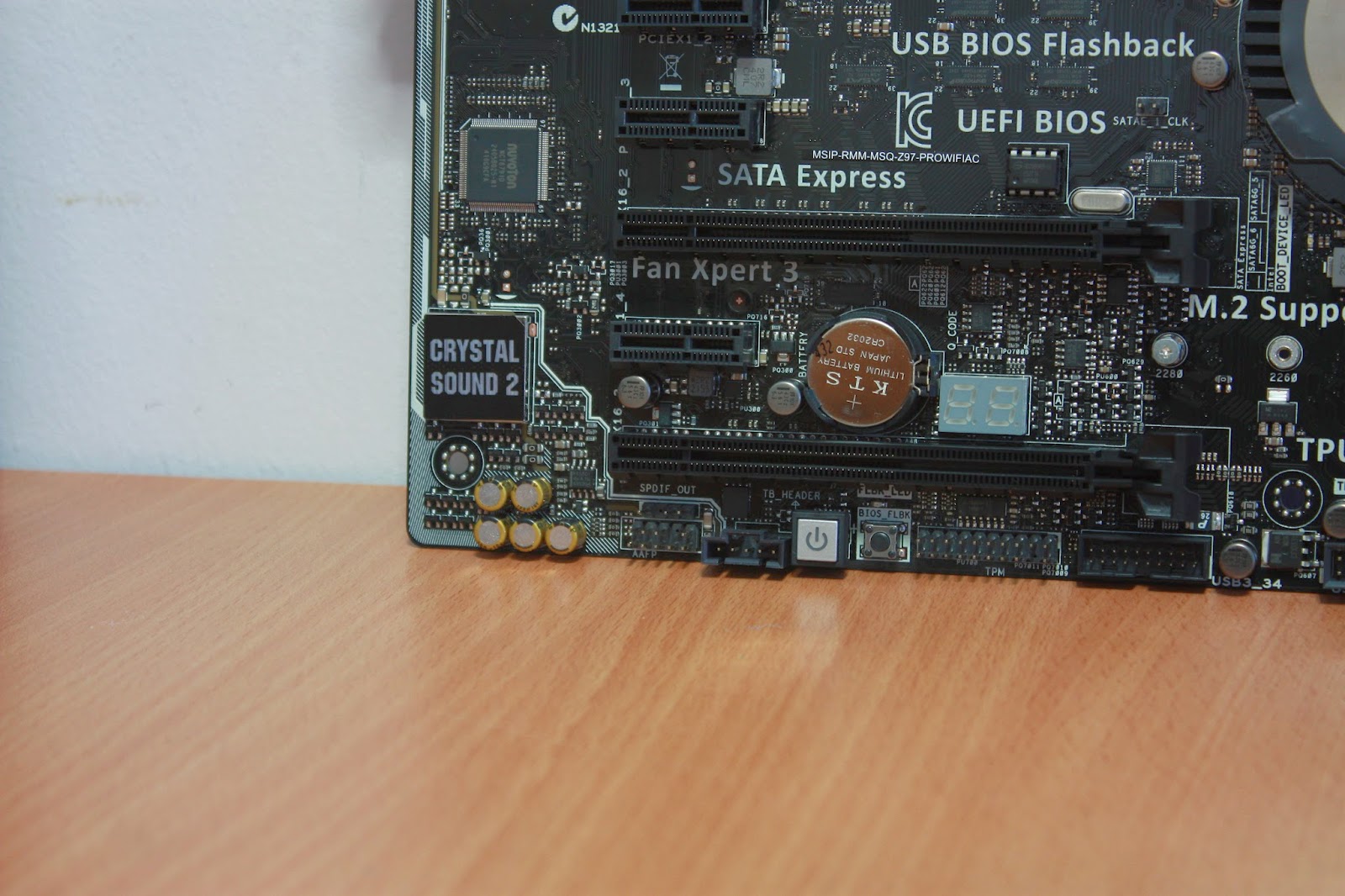 The LED POST code and onboard power switch is also seen on the motherboard. This is a feature which is usually seen on the higher end models. It makes PC diagnostic and troubleshooting much easier, especially for new system builders who does not have a PC diagnostic card. 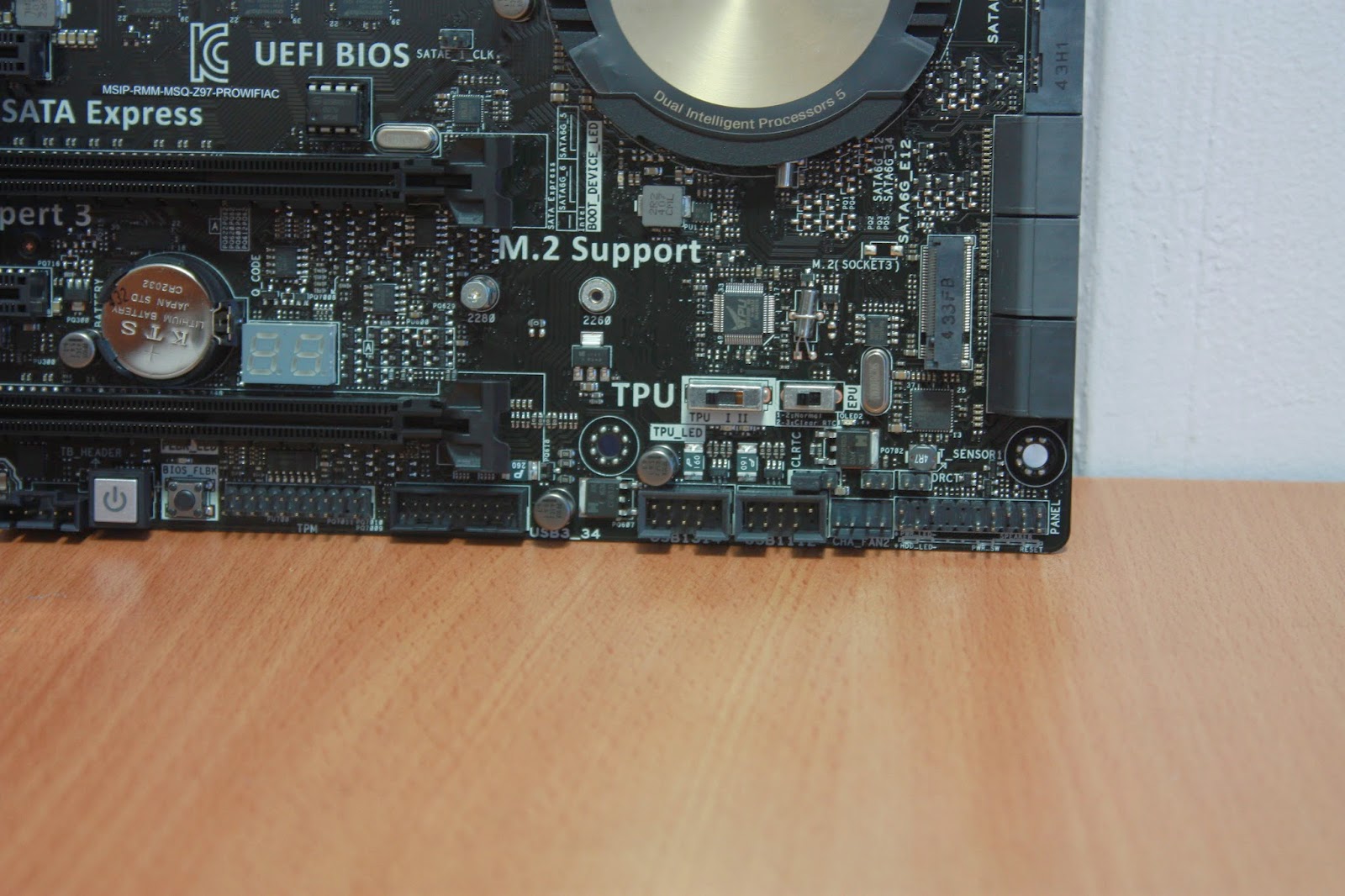 The TPU is a intelligent CPU hardware monitoring and control processor. With TPU 5, users will be able to overclock their system on the fly by simply adjusting the switch on the motherboard. They can simply choose between switch option 1, 2 or 3 for the relavant CPU speeds and performance for their usage. 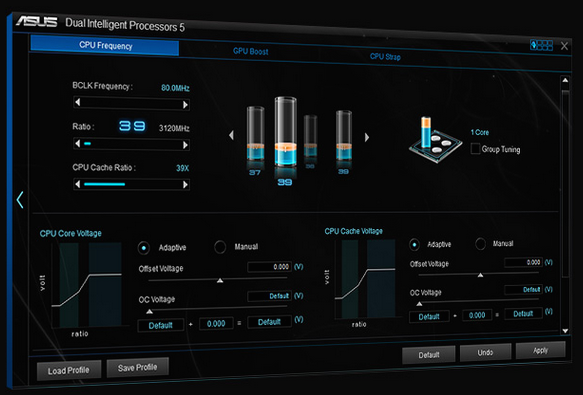 CPU control can also be monitored via the ASUS software provided. The software communicates directly with the TPU, enabling hardware level overclocking which can be helpful in serious overclocking instances.
All-round Energy Efficiency
The EPU switch found next to the TPU switch allow the control of the EPU unit within the motherboard. EPU, which stands for Energy Processing Unit will control the energy usage of the motherboard. Upon switching on EPU, power will be reduced. EPU detects and adjust power consumption according to the PC needs automatically. 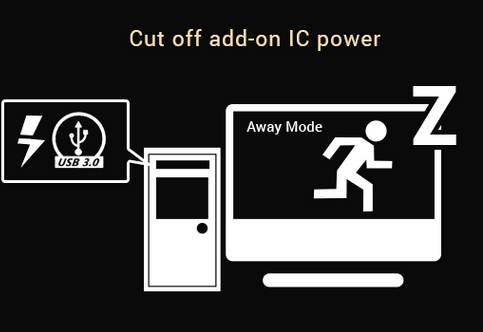 An added on feature for EPU is the control of power consuming peripherals. With Away Mode, an extreme energy saving scenario is created. Unused extra I/O controllers are shut down and graphics cards’ power levels are also reduced while you’re away. 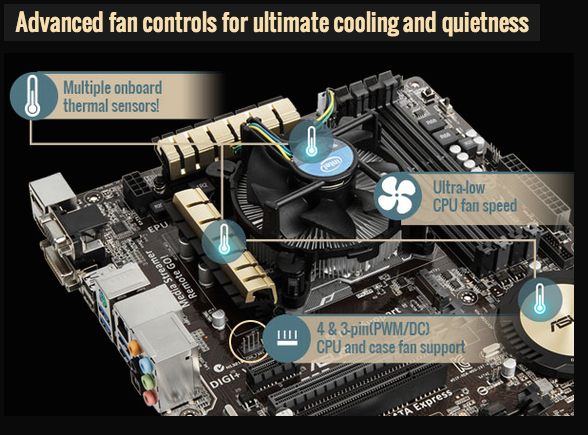 The fan control system within Z97 PRO [Wi-Fi ac] is named as Fan Xpert 3. This feature puts all fan headers and fan speeds controls in a single place. It scans for each fan’s properties and delivers settings for each individual fan based on user set profiles for default profiles. This ensure that there is the best balance between cooling performance and low noise. 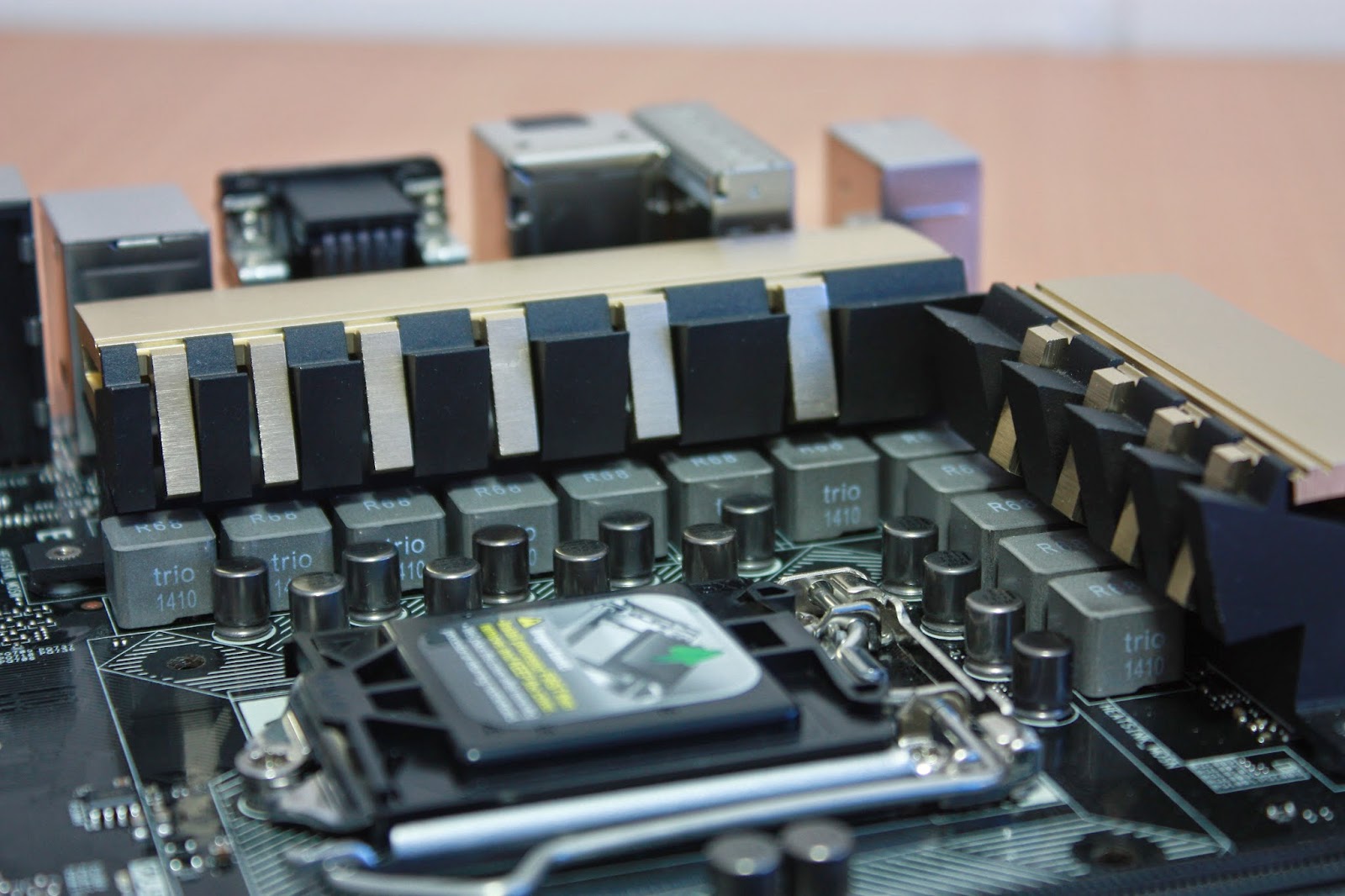 ASUS has equipped the Z97 PRO [Wi-Fi ac] motherboard with a 12 + 2 phase power design to ensure the clean, stable and uninterrupted current flow throughout the motherboard. 12 phases are dedicated to the CPU with the other 2 are mainly for the memory. This gives the motherboard a potential of high overclock on the CPU and memory, which results in even better computational performance. If you are unsure of how to overclock your computer with the evolved piece of art, fret not as ASUS has included a tool to do all the hard work for you. More about CPU performance boost will be talked about at the later part of the article. 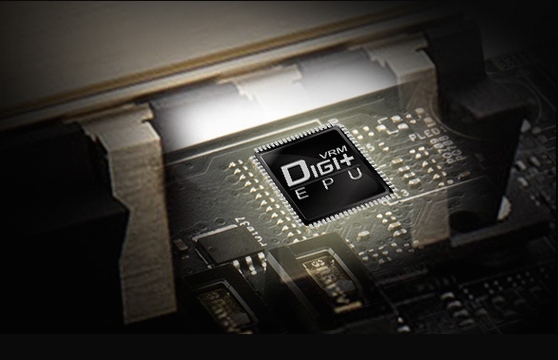 ASUS renowned DIGI+VRM processor is a digital Power Control module that is built into their motherboard. It has been used since the P55 series and now been improved for the Z97. This technology is also complies to Intel’s VRD 12.5 specifications, which increases the overclocking potential, enhances system stability and improving power efficiency with superior flexibility and accurate control.

Turbo LAN shapes the network traffic and reduces lag with no expert knowledge up to 1.45x. Default profiles can be set. More advanced users can use Advance Mode to reach specific networking settings on the network. 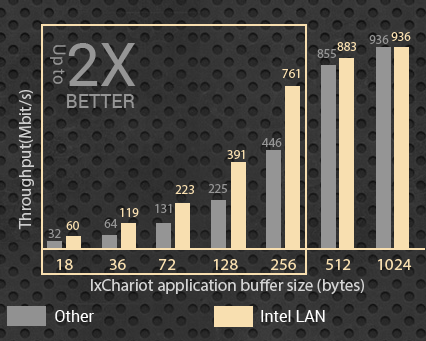 With the adoption of Intel’s Gigabit ethernet chip, half od the game’s battle is already won. Intel Ethernet chip is known for its great performance, providing higher speeds and lower latencies. Intel Gigabit Ethernet is the choice for all sort of PC gamers around the planet.

The Turbo App is an intuitive tuning panel that boosts all the required system components to reach the maximum performance on the games or software. When an app is launched, Turbo app automatically sets your computer’s settings — it overclocks your CPU, priority the game data across the network and optimized the audio settings.

The ASUS Z97 PRO [Wi-Fi ac] is tuned and designed specially for extreme memory overclocking. RAM modules can be overclocked up to 3200(OC) MHz. The exclusive T-Topology design created by ASUS provides out of this world overclocking capabilitys under full load by minimizing the coupling noise and signal reflection effect. The memory channels are equidistant to the CPU, enabling a balanced control over multiple memory modules and enhancing the overall memory compatibility. 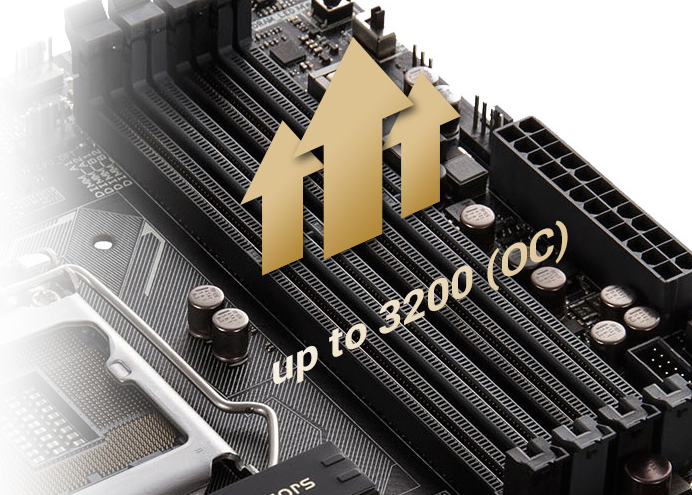 SATA Express provides up to 10 Gbps data-transfer speeds from two PCIe 2.0 lanes. This resolved the higher bandwith requirement of storage devices in the near future. This port is also backwards compatible with two SATA drives.

With another 2 x native PCIe 2.0 bandwidth, M.2. supports up to 10Gbps data-transfer speeds as well. The M.2 interface is a new port and could be excellent for the placement of an OS drive. It still supports Intel Rapid Storage Technology for the best compatibility. 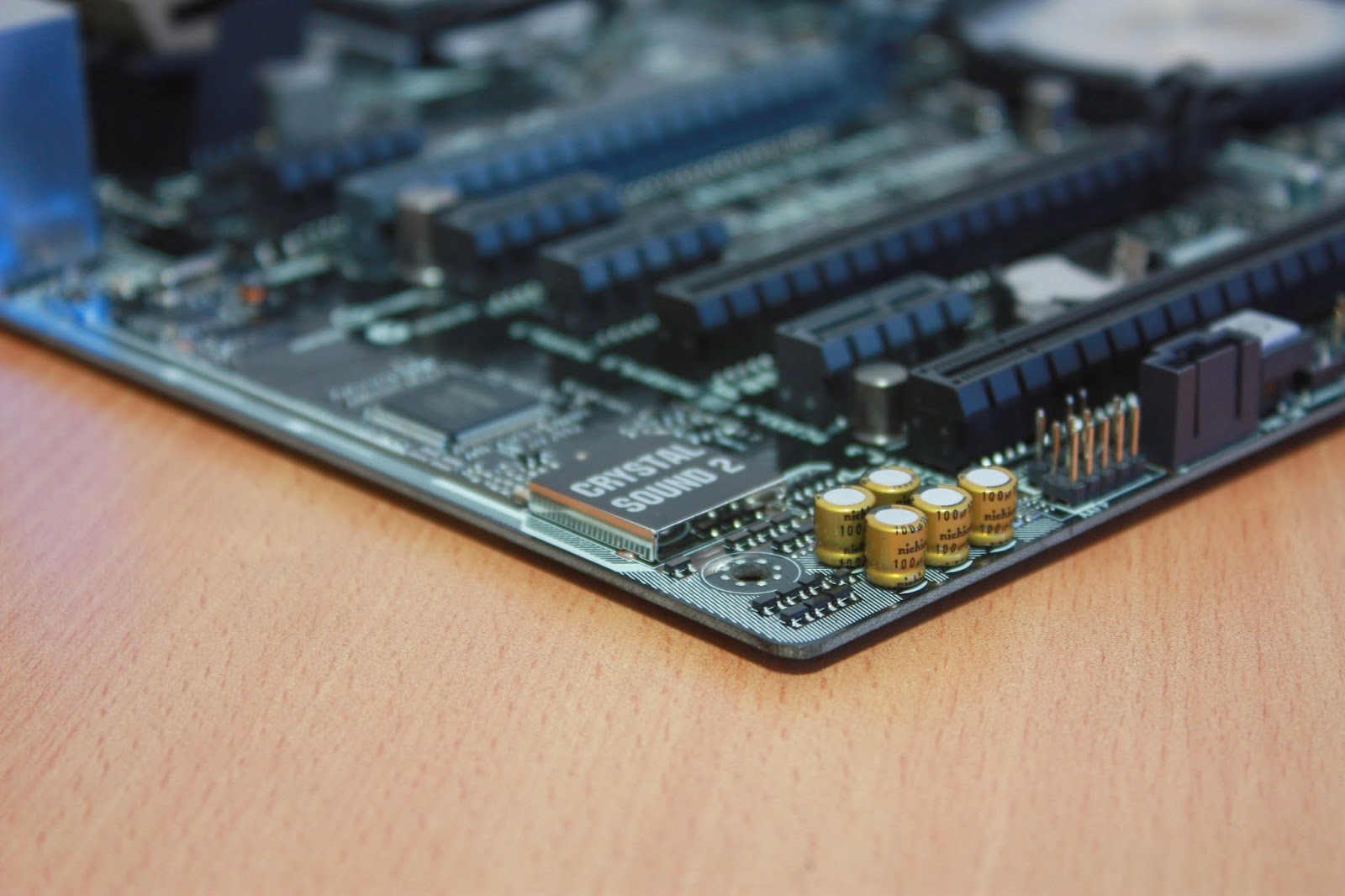 On the first look on the motherboard, one will realise its unique audio chip which is protected by the EMI shield with a “CRYSTAL SOUND 2” branding on it. Crystal Sound 2 is in fact a combination of software and hardware feature to ensure the best out of the best audio quality of the the Realtek audio chip. It customizes audio output to different audio profiles for different audio needs. Other than that, physical shielding, professional engineered design and premium components, including Japanese made audio capacitors and operational amplifiers are also part of the CRYSTAL SOUND 2 package. It promises exceptional audio clarity and fidelity.

With the various features tuned for games, it seems that the ASUS Z97 PRO [Wi-Fi ac] motherboard could be a good choice for gamers looking for a new PC. Its easy optimization features enable speed boosts at the most relevant parts of the system for the best gaming experience. This includes the improvement of performance of the CPU, network and sound which could really tingle the hearts of gamers. If not for the aesthetics of the Republic of Gamers motherboard that really attracts buyers, the ASUS Z97 PRO [Wi-Fi ac] is in fact more feature packed when compared to the ROG Ranger and the ROG hero. This motherboard could possibly be better for games than those in the Republic of Gamers series.

This is a motherboard that is geared for the future. There are multiple future interfaces made available, such as the M.2 port as well as a SATA Express port. More of such storage devices that are equipped with these ports will be out on the market at a later date and the motherboard will definitely work with them confidently. Of course, once such high end storage devices are used, performance will be increased indefinitely. Wi-Fi AC capabilities also makes the motherboard perform at maximum Wi-Fi AC speeds, but of course, it is up to users to decide between the Wi-Fi edition or the non-Wi-Fi edition. If you’re a gamer, you’ll probably prefer a cabled connect.

TCL Sponsors Premiere of "X-Men: Days of Future Past"