How I was convinced with Android again after years of being an Apple fanboy.

Home » How I was convinced with Android again after years of being an Apple fanboy.

After recently trying out the new Nexus 7 (2013), I realised how much Google and Android has grown throughout the years. My very first Android experience was with my HTC Desire running with on Android Gingerbread (2.3). That was back in 2011. As a first time user of an Android device, I felt that the smartphone just wasn’t good enough for me due to its immaturity in user experience and user design. It was quite a nightmare for me. 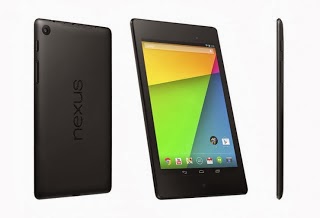 Jumping on to the other side of the camp, I have never regretted since. Apple products have a extremely simplistic design and each single function within iOS is straightforward.  Apple achieves perfect user experience with their “it will just work” philosophy, thinking of end users in their design process. At that point of time, because of Apple’s focus in quality apps and their rigorous application testing methodology in the app store, they have a far larger range of high quality applications that runs according to Apple’s UI design guidelines. Android was still struggling far behind. However, I saw that Google has been working hard on their mobile operating system platform as improvements were seen with their updated Operating Systems. The second device which I tried on was a Samsung Galaxy Tab 7 running Ice-Cream Sandwich. In terms of OS usability, it has generally improved, but due to Android’s fragmentation nature, applications and the OS itself is still quite unstable. What I’ve realised is that the growth in Android throughout the years in terms of its market penetration was not brought upon by the quality of the OS, but the hardware manufacturers rapidly pushing out the devices. It promotes a “Pull” factor to Google to improve their OS according to the problems which customers face on their OS. 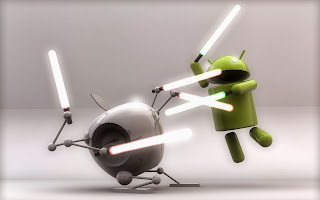 Fast forward to 2013, times have changed. Google has gained not only improve the Android Operating System, but also worked a lot on creating their own devices. They even acquired Motorola Mobility not long ago to reach into the mobile hardware device market. With the current Nexus 7 (2013) in my hands, I’m certain to say that Android and Google has finally reached the mark where their product is finally usable. Yes. This is the best Android experience I have ever felt up to date.

In fact, it was almost love at first sight with the Nexus 7 (2013). It allowed me to reminiscent the feelings I had when I first got my Apple iPod Nano a few years back. The feeling of true empowerment of technology and the capabilities of the device that goes far beyond its own limits. The Nexus 7 (2013) has reignited my interest in Google and their Android operating system. 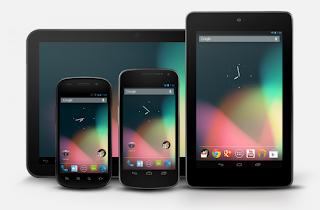 The Nexus 7 is perhaps the most inspiring Android tablet ever made. Pre-installed with Jelly Bean 4.3, there was much improvement in speed and smoothness in interfacing with the tablet device. It was almost lag free. Switching between apps and transiting between the home screens gave no visible stutters.

Additionally, I salute the Google Nexus 7 (2013) and all Nexus devices for their “no-frills” concept. It gives buyers a sense of confidence because they know that they will have a full Android experience without any 3rd party crapware installed. This also helped to keep prices low. 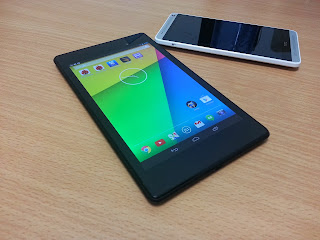 The 7-inch optimal form factor make the device highly portable. It is comfortable and light enough to bring it around. However, if you are looking for a productivity device, this screen size may not be suitable. The Google Nexus 7 is in fact an agile entertainment and social device all put together. Media playback, eBooks reading, internet browsing and social media updating are what this device does best for you thanks to its crazily clear Full-HD display.

I also notice they trim down the side bezel to be slimmer and yet it is still comfortable enough to rest my thumb there without obstructing my viewing experience. I see a lot of people are complaining about the top and bottom bezel, certainly it can be slimmer and smaller but I am able to place both of my thumbs on the bezel while watching video when I am in landscape mode, is really comfortable I must say. 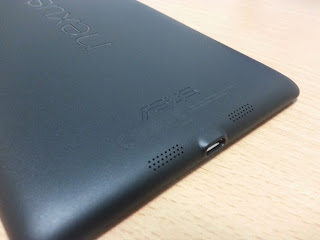 Unlike many budget tablet Android computers, ASUS has integrated a pair of speakers within Nexus 7 for optimal entertainment media consumption. In terms of quality, these speakers gave out sounds of considerable good highs and lows. As compared to my previous iPad mini (2012), there was really a lot better in terms of audio quality. 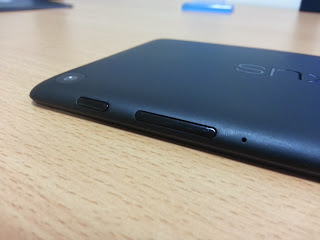 Just like an iPad mini, I appreciated that the new Nexus 7 is a single unit without any removable parts. The back and the front of the tablet are infuse together as one single device. Despite it being built with humble materials, the device feels very sturdy and durable. I appreciated the material that was used at the back of the new Nexus 7. It has a rubbery feel that is also soft, making it an exemplary device for ergonomics together with its curved edges. 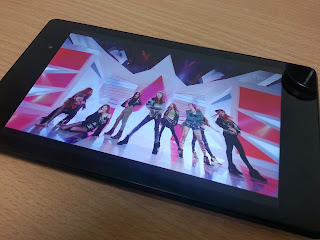 Despite all these awesomeness that I had already mentioned about the new Nexus 7, there is still a single part that makes the device mindblowingly perfect. It is its display. Colours simply POP out from the screen thanks to its FullHD 1920 x 1080 resolution. At 323 pixels per inch density, it offers absolute clarity for various type of media. Android OS handled different resolutions well and every interface item are just at the right size. Photos look fantastic. FullHD movies are finally be able to play at the resolution it is made for.

Moving on to the improvements of Android as an Operating System, I felt that Jelly Bean has much improved from previous Android version. It has been refined and made simpler from a end user’s perspective. It’s almost an 360 degree change from Android Gingerbread.

However, I thought that there is still a lack of updated applications on the Google Play Store. For example, Facebook has already been updated to its latest version suited for iOS7, but is still having an older interface for Android. It seems that fragmentation in devices is causing some problems with Android as Apps on Android has to work with different kinds of devices. Unlike Apple, users are ensured of the performance of the apps as they are certified and proved to work well. However, as Android’s marketshare increases over the years, I’m sure that more developers are also putting more effort on the platform. 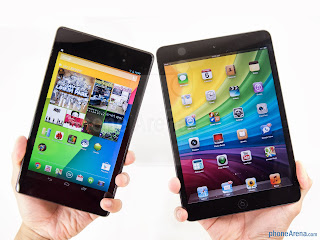 The new Nexus 7 device has definitely lived up to the name of Google. If I were to need to make a decision between the new Nexus 7 and Apple iPad mini, I will have a hard time deciding. iPad mini feels like a premium device from Apple while Nexus 7 feels like a device for everyone. If I had the spare cash and wanted something to show off, I think I will pick the iPad mini. For a fraction of the same money spent on the iPad mini, the Nexus 7 will also function just as well as the iPad mini in the Android way. I think many people will also feel that the new Nexus 7 could be the perfect affordable device for them.

Nevertheless, I can see with each time Google releases new product, it is one step closer to its goal of “One Beautiful Google”

Editor’s note : This article was written by someone who totally gave up his confidence in Google and Android OS a few years ago after disappointing encounters with Android devices and the OS. He then became a total Apple Fanboy, solely trusting and using Apple products. After years of residing in the Apple camp, his experience with the new 2013 Nexus 7 from Google and ASUS started to change his mind and impression of the OS and its device.

Probably the toughest Bluetooth Speakers ever made - BRAVEN BRV-1