Looking into the future and putting much prospects on mobile devices running on Intel’s processors, Intel has seen that Atom Processor series could be a top earner for the company in the near future. Embracing that idea, Intel recently released information at their Q2 conference, stating that they will now establish Atom branded processors as the core of their products, putting them under the ‘main pillar’ as opposed to a previous side earner. Intel will developer Atom further into smaller die size while improving System-on-Chip(SoC) integration of key elements such as graphics, sound and communication devices. 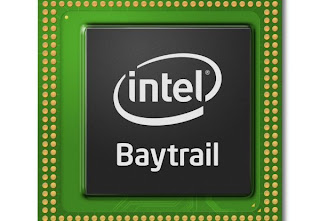 Bay Trail, the next generation 22nm die on the Atom processor will consist of a Quad Core 2.1GHz clock while consuming only half the power as previous generation Clover Field thanks to Moore’s law. Another notable improvement on the chip is the fact that the Intel Atom architecture will now include a Dual Channel 64 bit DWRAM as compared to a Dual Channel 32 bit implementation, doubling the data capacity and efficiency of the whole architecture.

Bay Trail SoC codenamed ‘Valleyview-T SoC’ will feature an advanced 7 Series Intel derivation of graphics solution that will be Direct X 11 capable, which probably will be 3x faster than previous generation 32nm implementation. 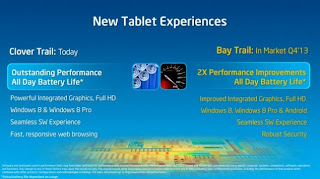 The 22nm die will feature the Silvermont Micro architecture, claiming to increase efficiency of multi-core systems, performance per watt and the best-in-class single thread performance. It is also speculated that the Intel Atom will not feature AVX2, since widening the register to 256 bit will lead to increased power consumption which is not acceptable for Bay Trail.

According to the presentation slides from Intel’s Q2 conference, Bay Trail will ship in 2014. 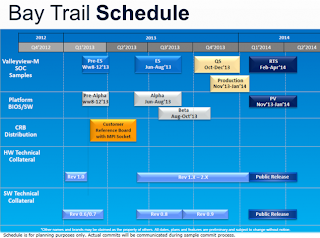 Nvidia Shield Handheld device to be shipped on 31 July