ASUS has just launched a new graphics card for their AMD lineup. The ASUS Radeon HD 7790 DirectCU II OC edition fits in the current price gap between the HD7770 at around 200SGD and HD7850 at around 300SGD. News of the HD7790 has just surfaced on the internet not long ago, but here’s the official first look and benchmark results of the HD7790 from ASUS.
Targeted at the performance-mainstream market, the AMD Radeon HD7790 should be the choice of most users who are looking for a decent card, but not willing to spend more than 300SGD. However, the Radeon HD7790 has probably come too late to meet actual needs of users. Most people would have already settled down on a HD7770 or a HD7850.
Despite that, it is also good to see that AMD is still pushing out new cards in the market as it was shown in their roadmap that there will be no new generation of graphics card from them this year. The HD7790 could probably entice some new system builders and gamers looking for a nice upgrade from their entry level graphics card.
How will the overclocked version of HD7790 fair against its bigger brothers? We take a look ASUS’s offering of the DirectCU II OC version of the AMD Radeon HD7790 and compare it to a higher end HD7850 to determine if it is actually worth the buy.

The ASUS Radeon HD7790 graphics card come with a standard packaging box from ASUS. As this ASUS card is using a reference circuitry design from AMD, thus it is branded OC instead of usual TOP.
﻿

The HD7790 DirectCU II OC is said to run 20% cooler than reference design but it does not compromise noise levels. This card runs significantly quieter as compared to a blower design of the reference card cooler.

Within the box is a speed setup guide, a Driver CD which also includes the latest ASUS GPU Tweak tool, a CrossFire Bridge and a DVI-VGA Adapter.

In fact, the HD7790 from ASUS has an oversized GPU cooler. This will effectively cool all the different components on the graphics card to ensure card stability and longevity.

The HD7790 has a full size display port, a HDMI port, a DVI-D port and a DVI-I port. If you are using the DVI to VGA adapter, make sure to connect it to the DVI-I port instead of the DVI-D port as only DVI-I port supports analog signals.

The HD7790 requires a single 6-pin connector and consumes less power compared to the HD7850. This is probably an advantage it has to the higher end cards. The HD7790 makes it a better choice for HTPCs where PSUs are limited by their physical size and therefore wattage.

A single CrossFire X interface is also found on the graphics card. This means that only Dual CrossFire X setup is possible.
﻿ 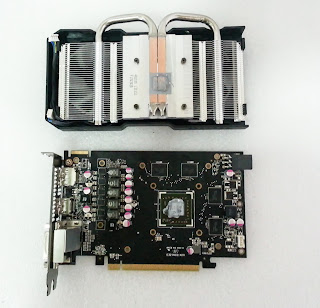 The cooler is designed with 2 main heatpipes to direct heat away from the GPU core and then cooled by the 2 80mm fans. The 80mm fans are also directed to cool the components of the card such as MOSFETs, VRM and memory chips passively.﻿ 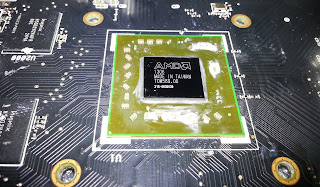 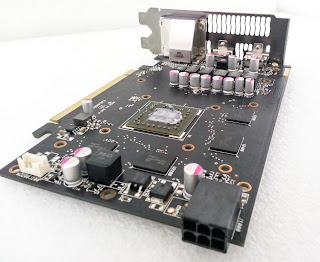 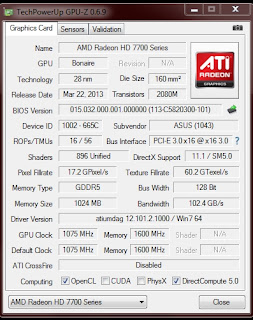 ﻿
Thermal performance of the DirectCU II Cooler is similar to those on the other graphics card. The difference in temperatures is insignificant as compared to the HD7770 and we can safely say that they have similar heat output. However, when comparing the coolers between the HD7850 DirectCU II which uses dual 120mm fans, the temperatures on the HD7850 are much lower.
The DirectCU II cooler has done its job well, putting the HD7790 at a maximum of only 71deg Celsius. This means that the card can be even further overclocked to push it to its real limits.

﻿
The benchmarks are rather conclusive and that the HD7790 fits right between the HD7770 and HD7850. As for its performance, the HD7790 will be able to play all mainstream games at playable frame rates at a Full-HD resolution, but may not handle high end graphics intensive games as well as the HD7850. ﻿

The HD7790 probably isn’t the card for hard core gamers. Its performance is acceptable, but not the best. It will only make sense for those who are building a new computer system, but probably not for those who are looking for a change of card. As for thermals, the card is well tamed because of ASUS’s own DirectCU II cooler. This also means a higher headroom for overclock and also stability.

The ASUS HD7790 DirectCU II OC graphics card will be available in most major PC component retailer shops in Sim Lim Square at a suggested retail pricing of 239SGD.

Benchmarks and Photos courtesy of poor_poor﻿