ASUS has come back to re-innovate again with the release of the successor to the previous Padfone which was a genius concept at that time. However, the original was filled with software bugs, compatibility issues and overall was unpolished. Can Asus iron out these issues and pull consumers back?
Specifications


Upon first glace, the Padfone 2 may seem like a generic blocky android phone that just popped out the on-going chain of manufacturers pushing out plain looking devices. Closer inspection reveals the tiny intricate details that ASUS has put into designing the Padfone.
“Premium looks through small details”

When I first picked up the Padfone 2, it surprisingly felt like a deep and premium device thanks of its slim , tapered aluminium bumper enclosing the borders of the phone. The aluminium bumper feels excellent in my hands, especially when the volume and power buttons are also machined aluminium, further strengthening the premium feel of the device.

The Corning® glass envelopes the entire front side of the phone, which has
the embedded capacitive buttons and even the ASUS branding underneath it. Not covered by the glass is a tiny curved chin at the bottom which melds seamlessly to the bottom. My slight irritation is that the anti-fingerprint coating on the Corning® glass isn’t spectacular by any means, but that’s what  good screen protectors are for to remedy this.

The back of the phone may be its biggest uniqueness that is signature only to ASUS. It has a plastic back with circular ridges running around the camera lens. This produces a beautiful light reflection pattern when rotating the phone around. This design choice also can be seen in other premium ASUS products such as the Zenbook ultrabook lineup ASUS offers. Behind also lies a horizontal shiny speaker grill beside the lens and a metallic “Padfone” branding at the bottom.

*enlarge the image to see the
Moiré pattern clearer*

The screen is just among one of the spotless features about the phone (and tablet). It is among the dime in a dozen of the numerous super IPS+ screens seen lately on phones such as the Nexus 4 and HTC One X. Amazing viewing angles, vibrant color and contrast and pin sharp text with 312 PPI.
“Keeping up with the competition”
However, a feature that puts ASUS’s screen a step higher is the response time, with an average time of 65ms. Compared to the HTC One X’s 75ms and Samsung Galaxy S3’s 85ms. This provides a more tactile swiping experience, although consumers may have a hard time telling the difference.
A worth mention here is the ridiculous brightness that is affiliated with Super IPS+ screens. Boasting a full 550 nits of brightness, almost twice of a SAMOLED display found on products such as the Samsung Galaxy S3 (300 nits). Outdoor readability under bright sunlight is a joy, without your eye squinting or your hand shading the phone.

This is where it gets fun and probably the main reason why you would want to purchase the padfone 2. Namely called the Padfone station, it serves mainly to “transform” your phone into a full functional android tablet. Not only does it give you far more screen space to work with, it holds an additional battery that can charge your phone on the go while docked, which gives an insane battery life in using this 2 in combination.
“Best of both the phone
and tablet worlds”

The tablet itself feels relatively light even with the Padfone docked, the most stand-out feature would be the back soft touch material which feels absolutely amazing while holding it. Its texture also allow users to hold it tightly, almost no chance of it slipping out of your hand

The front of the tablet is an almost identical screen to the phone, with same IPS+ technologies and glass used. The key thing to note is the resolution for a 10.1″ tablet (1280×720), which is extremely small for a tablet this size. Other tablets such as the Apple iPad, ASUS transformer prime infinity and Samsung Nexus 10 all have more than 4x the resolution. This might be a deal breaker for some as pixels can obviously be seen at such a low pixel density.

However, I view it for the value it brings for the price you pay. Media consumption, reading text and playing games are enhanced by just merely docking the phone into the tablet. Even with the lower amount of pixels, it executes its purpose of enhancing user usability extremely well.

“Low resolution, but does its job well”

*Note that the docking station is nothing but a paper weight without the Padfone. It can only function when a Padfone is docked in it.

ASUS has packaged the Padfone 2 with a custom UI overlay much like Samsung’s touchwiz or HTC’s Sense. What I like is that ASUS version is very close to stock android, which closely emulates the best android experience as Google planned it so. The sample unit we received is running the latest Android 4.1.1 after upgrading the firmware. It includes  some custom tweaks done by ASUS to boost their software within the phone. Among of which they stated to improve the phone’s GPS, enhance the audio and also faster camera focus among the list of features listed.
Running in the phone is a custom launcher which has no performance hiccups and transitions slide in and out smoothly thanks to its powerful processor. Transition times when the phone is docked or detached are also improved over the predecessor, approximately 1 second. What may come across to users as an irritation is that there are a few “bloatware” apps that come pre-installed within the phone. However, a quick uninstall of any unappealing app may be done easily.
“ASUS adds onto stock android
instead of changing it”

A custom feature called Dynamic Display lies within ASUS customization settings and handles the transition between phone and tablet. What it does is to change the UI from phone to tablet and vice versa, along with closing incompatible apps. Inexperienced or new users may be confused when certain apps force close (including live wallpapers/ launchers) when transitioning between the docking station. There lies a list of which users can choose to bypass the force close caused by Dynamic Display but not closing certain apps during transition may cause compatibility issues.

The Padfone 2’s camera on the back is a 13 Megapixel shooter with a rather wide aperture of F/2.4 and a BSI (Backside Illuminated) sensor that is outsourced from Sony. ASUS has even bundled custom software for operating the camera, including various modes and filters that users can set and adjust as they wish. Some advance controls were also present such as being able to manually choose ISO levels and changing exposure compensation levels.

Pictures taken from it are hard to distinguish between other similar level phone cameras, apart from the megapixel count. The white balance seems a little off at times and the contrast levels isn’t that high. The low light performance is sub-par due to the high pixel count and the one distinctive advantage that makes up for the Padfone 2’s average picture quality is the blazingly fast speeds you can achieve.
It supports 6 FPS continuous burst for 100 images. Both the One X and S3 only have a burst of 3.3 FPS. On top of the already good burst speed, a Zero Shutter Lag feature compliments it. Letting users easily take photos instantly the moment they press the shutter.
“An average but lightning fast camera“

Panoramic mode in the camera


Other than just taking fast stills, the Padfone can also take decent quality video in several modes, highest quality being 1080P with an easy to edit MP4 format.

A cool feature that consumers might be craving more is high speed recording. ASUS provides 1080P @ 30FPS, 720P @ 60FPS and 480P @ 90FPS. The videos taken in the 720P & 480P format can be manually edited in a video editing software to playback at 24 FPS to give a slow motion vibe to the video since it was recorded in higher frame rates. Sadly ASUS can’t don’t have the software to change playback speeds within the phone.
Other picture samples

Battery Life
One of the extremely strong points in the Padfone 2 is the amazing battery life it has. In the phone only, a rather large 2140 mAh battery can last you for the day easily, about 16 hours of usage with automatic brightness.
Where it begins to shine is the 5000 mAh battery within the dock that can be used to charge the phone on the go and extend the Padfone 2’s battery life by up to 2 times! The diagram on the right shows a fully charged Padfone 2 (phone + dock) last approximately 4 days with moderate usage.

All the upward peaks on the diagram is actually the dock charging the Padfone directly from its battery. There is even a separate keyboard dock that can be purchased to add on to the already ridiculous battery capacity.

ASUS also have some custom tweaks for their sound, featuring “SonicMaster audio technology” in their speakers. Users will be able to select 5 preset scenarios from the “AudioWizard” app to suite their audio needs. However, the technology is only available for the speakers and not external headphones. Unlike HTC’s way approach for Beats Audio where it is applied universally to all plugged in audio devices.

In my testing, plugging in my in-ear headphones and listening to some music and tried some games. There was no static noise at all which was excellent.

The speaker on the rear of the phone sounds really good. It doesn’t distort much when playing back even when maxing out the volume. In-addition, the position of the speakers are optimal, with little chance of your hand muffling the sound.

The tablet speakers however are only located on one side, holding it in landscape can easily muffle the speakers.

Benchmark scores were high as expected from the well renowned quad core snapdragon processor. It beats the last generation Tegra 3 processor significantly and even edging out slightly against the Samsing Galaxy S3 Exynos Cortex A9 processor in the Vellamo benchmark. Performance is of no issue at all in the Padfone 2. 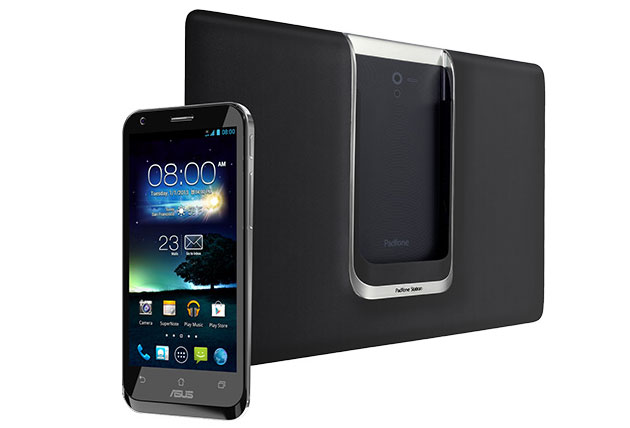 The Padfone 2 easily shows how there is still innovation to be done within the mobile phone market. ASUS taking the risk and the results work seamlessly in the end. This would provide the company a small jump in the already large recognition they have obtained in PC, motherboard & graphics card manufacturing etc.

The unique thing about this phone is that it can satisfy 2 needs, a smart phone and a tablet, 2 in one solution that compliments each other without sacrificing additional data plan costs. The specifications on the device is good, no major flaws in any way and since it is so unique, it will steal stares from everyone you encounter.

“I would highly recommend this product as its innovations and features far exceeds the small technical software shortfalls that the Padfone 2 has. It is perfect for those who are upgrading and wants to have a 10″ Android tablet experience without breaking the bank by purchasing 2 separate devices”
Review done by Chng Zhi Xuan, Technology Reviewer

BlackBerry Launches the All New BlackBerry Z10 Smartphone in Singapore