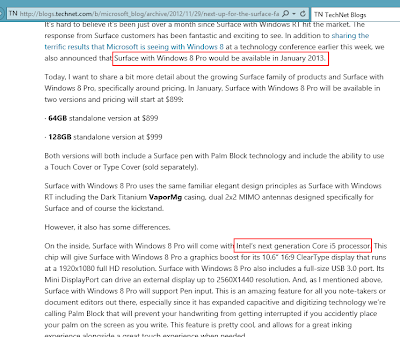 As we all know, Intel’s next generation Core processors will be an improvement from the current Ivy Bridge architecture. More commonly known as “Haswell”, the next generation Core processors availability dates are yet to be announced by Intel, but speculations says that it will be available in Q1 2013. However, I never knew it could actually be this early in Q1 2013 as previously, there were also reports on the release date to be in Q3.
However, it seems certain that the news are accurate and that Haswell will indeed come in the first weeks of 2013. The next question would be : When will the desktop variants arrive in the market?
Microsoft TechNet blog:http://blogs.technet.com/b/microsoft_blog/archive/2012/11/29/next-up-for-the-surface-family-surface-with-windows-8-pro-pricing.aspx

Microsoft Surface Pro to be priced at 899USD