Two years on, AMD has finally released their much anticipated Zen 4 microprocessors. They have also announced the new AM5 platform that is designed for the Zen 4 processors and future processors through 2025. As the embargo lifts, here’s how we find the new AMD Ryzen 7000 series processors. 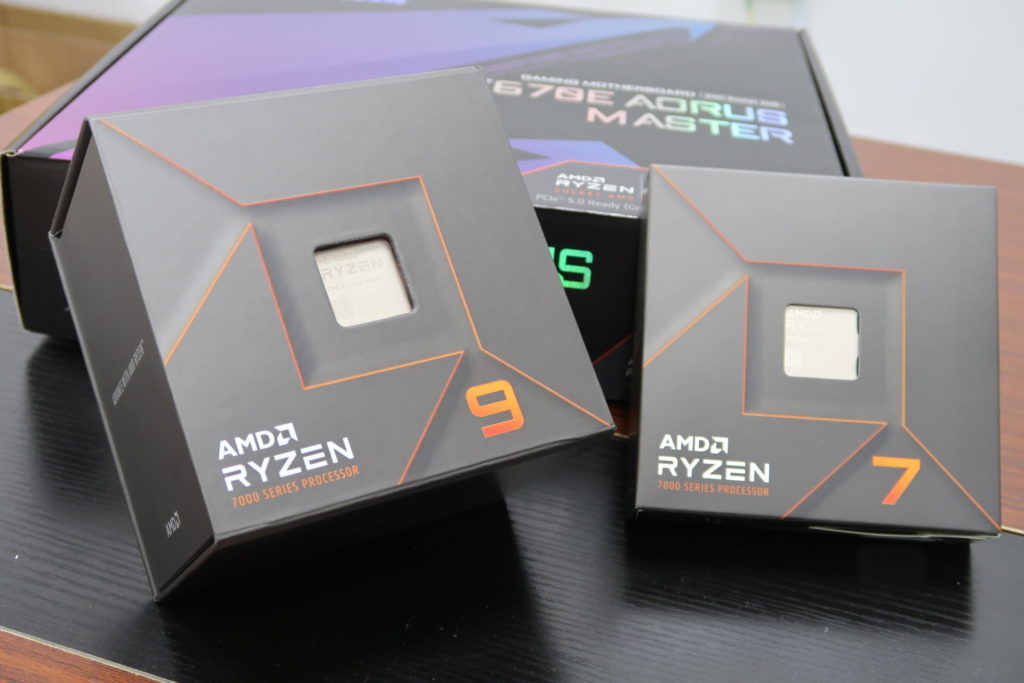 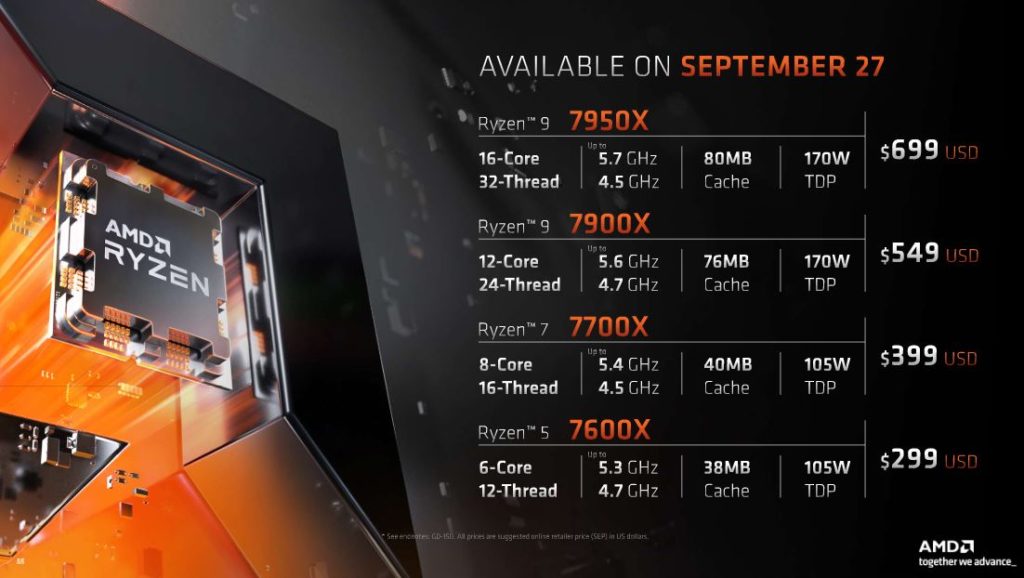 About the new Zen 4 processors

There was a lot of work done to bring the new Ryzen 7000 series processors to fruition. With the new Zen 4 architecture, AMD has recorded a 13% IPC improvement and substantial improvements to energy efficiency and new AVX-512 computational capabilities. 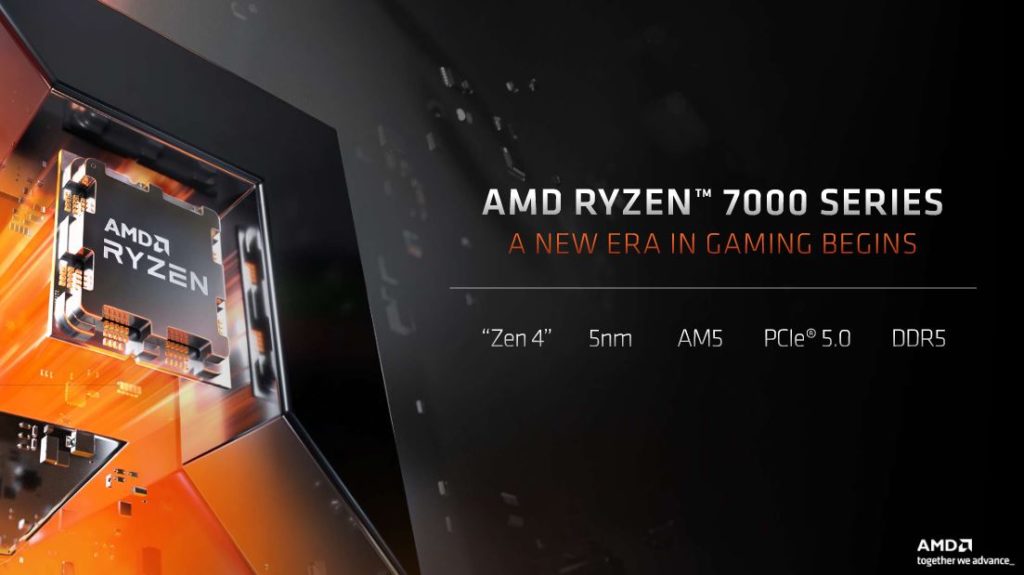 To support an overall improvement to system performance, the new Ryzen 7000 series processors are also equipped with DDR5 memory and PCIe 5.0 features.

Then new processors were also designed with the new TSMC 5nm process that brings about major power reductions across various range of operations. The new 5nm process provided an average of 40% gain in performance-per-watt improvement.

Bringing both of these technologies together, AMD was still able to achieve major frequency gains. All Ryzen 7000 series processors are rated with a maximum clock speed of over 5GHz, which was significantly higher than predecessors.

The Ryzen 7000 series processors are endowed with what it takes to be the fastest processors in the world. Its new features, improved performance and superb energy efficiency sets the benchmark for new microprocessors of today and the future.

The new I/O die now brings support to graphics output on all Ryzen 7000 series processors with the introduction of a lightweight RDNA 2 graphics processor. This enables Display Port, HDMI, USB Typec-C with DP Alt mode, AV1 video decode, accelerated H.264/H.265 video encode/decode. For a desktop PC setup, you are all good to go without a dedicated graphics card attached to the system. All these features and sophisticated power management are inherited from the Ryzen 6000 series mobile processors. 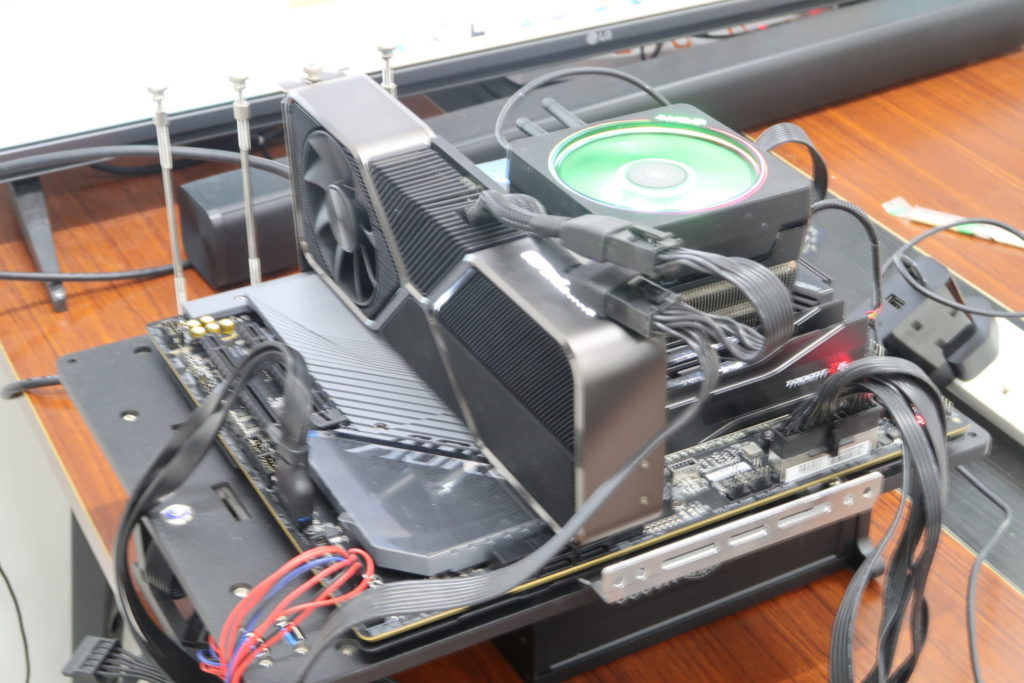 We will put both the AMD Ryzen 9 7900X and Ryzen 7 7700X to the tests, comparing it to its Zen 3 predecessors – Ryzen 9 5900X and Ryzen 5 5600X. This allows us to understand the level of performance improvements between generations of Zen based processors.

AMD has also defined a new memory profile for better support of memory overclocking. Known as AMD EXPO, memory manufacturers can introduce AMD EXPO memory profiles to their products, allowing users to easily configure their system to run its memory at a predefined overclocked state. You can learn more about AMD EXPO here. 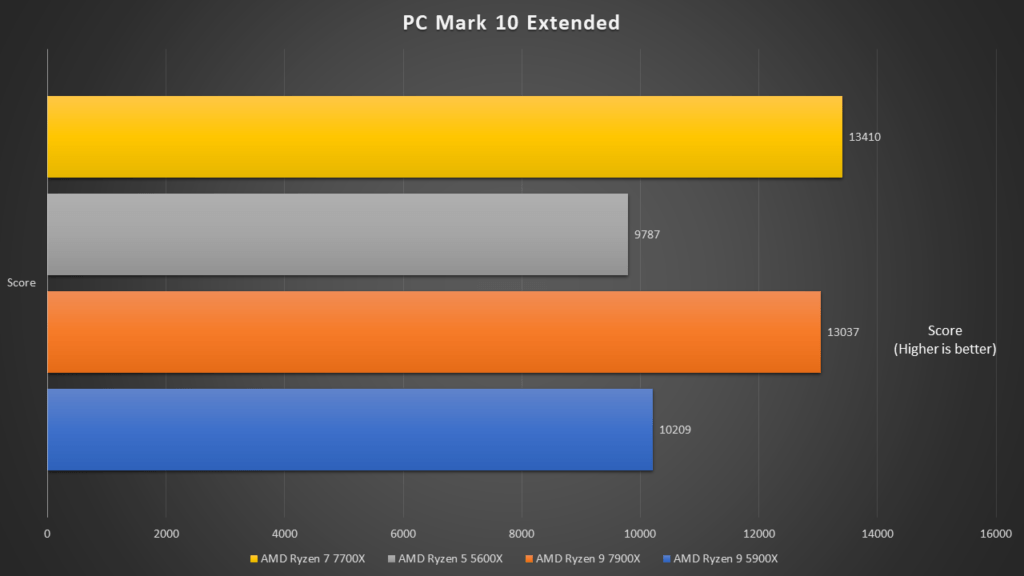 In terms of overall PC performance, we saw how the AMD Ryzen 9 7900X and Ryzen 7 7700X surpasses the performance levels of previous generation Zen 3 processors. This could be attributed to many factors, such as the new DDR5 memory and improved microarchitecture which leads to higher IPC and higher CPU frequencies. 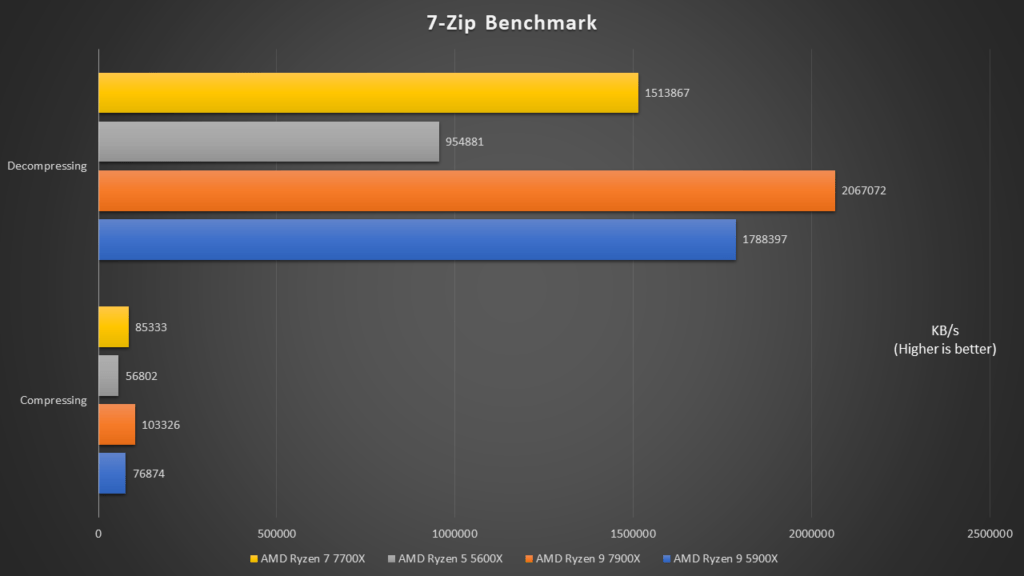 7-Zip benchmark tests performance levels are largely determined by the number of cores a processor has. As it is a multi-threaded application, the AMD Ryzen 9 7900X excels in this test, coming up on top for both compressing and decompressing scenarios. On the other hand, the AMD Ryzen 7 7700X still performs outstandingly, coming shy of the Zen 3 AMD Ryzen 9 5900X despite it having 4 cores less. 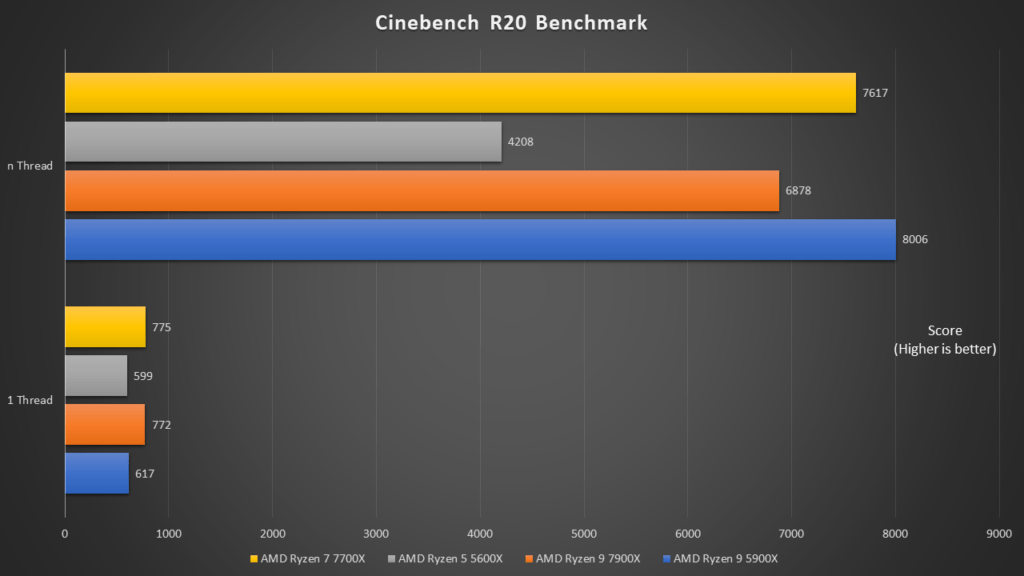 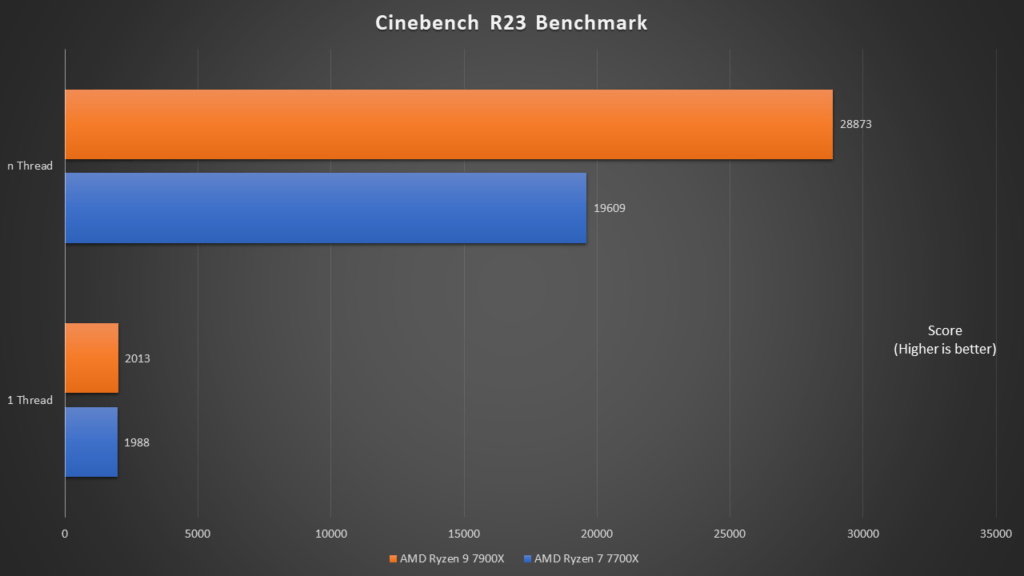 We can really see the performance benefits of the Zen 4 processors as compared to its predecessors. When looking at the single threaded Cinebench test, both Zen 4 CPUs scored extremely well. The results for nThread tests widened as the processors scale to run the benchmark with all cores active on load. 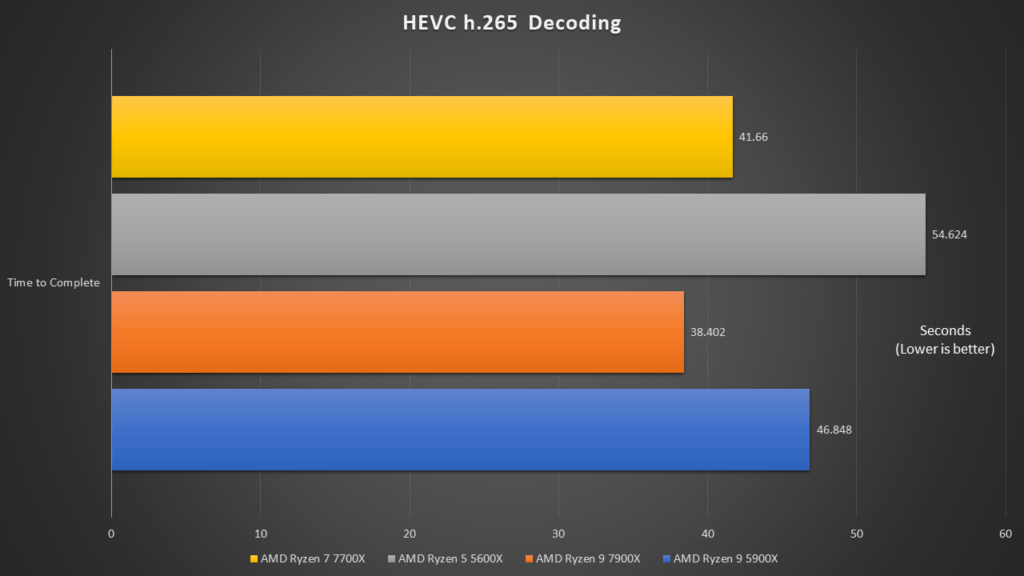 Similarly for media decoding tests both the Zen 4 CPUs faired very well too. What’s interesting to take note is that the Ryzen 7 7700X actually is faster than the Ryzen 9 5900X when it comes to running such workloads. 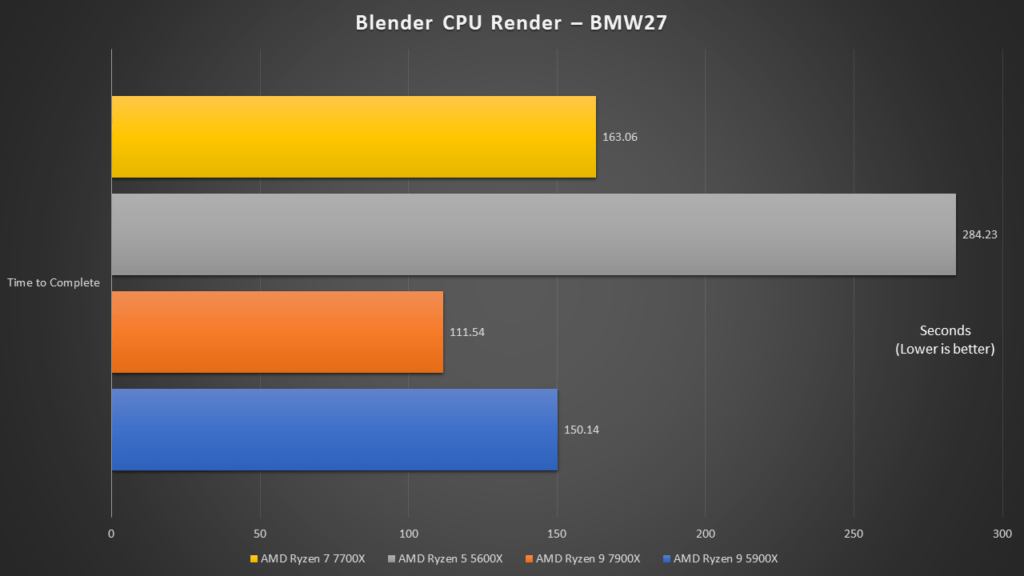 When it comes to creativity application and rendering, both the Zen 4 CPUs did show how well they can perform. In fact, it is certain that upgrading to the Zen 4 processors will result in significant productivity increase, due to the lower rendering times. 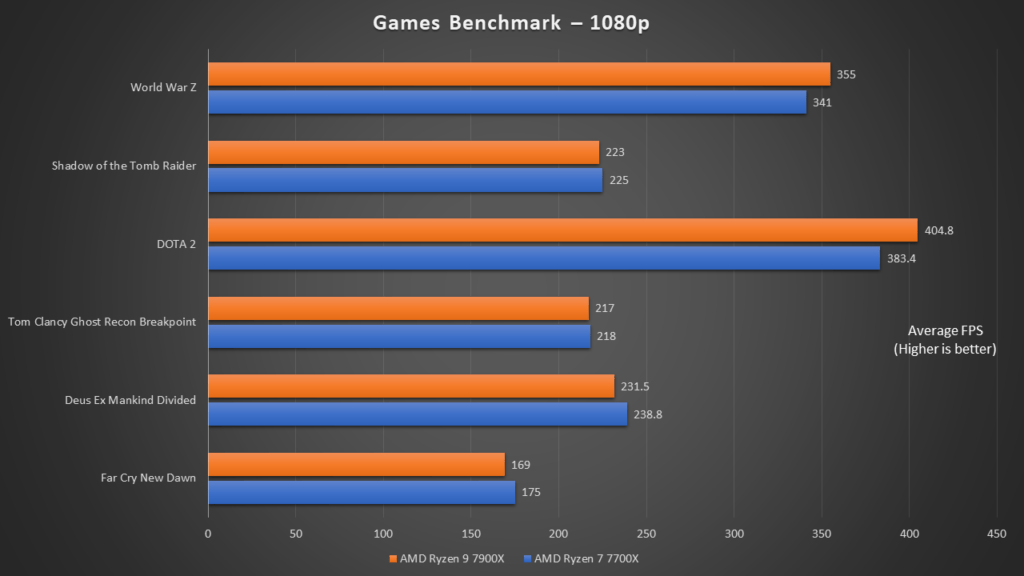 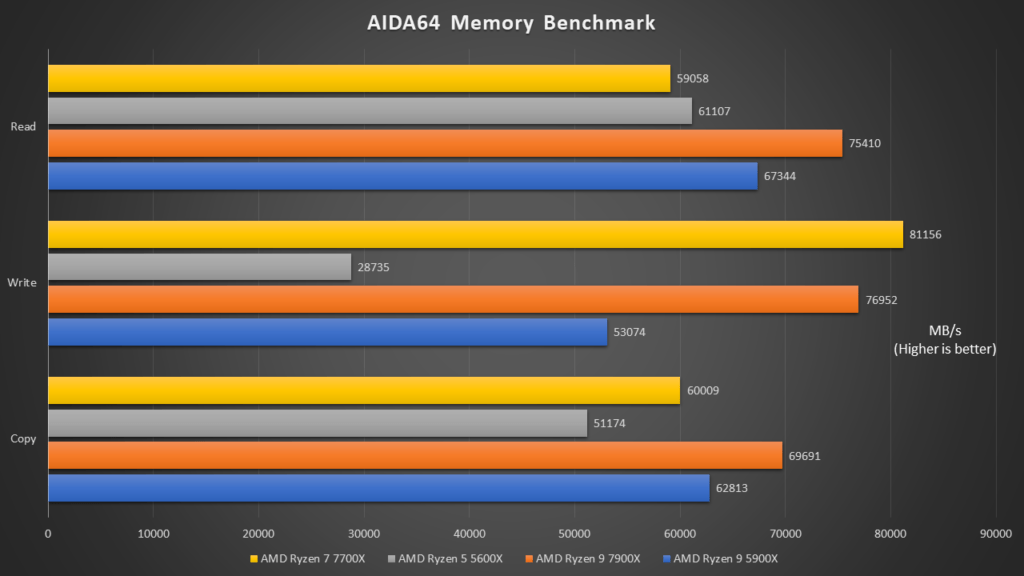 The benefits of the DDR5 memory support on the AM5 as compared to the previous generation’s AM4 platform can also be seen as they generally have higher throughputs. 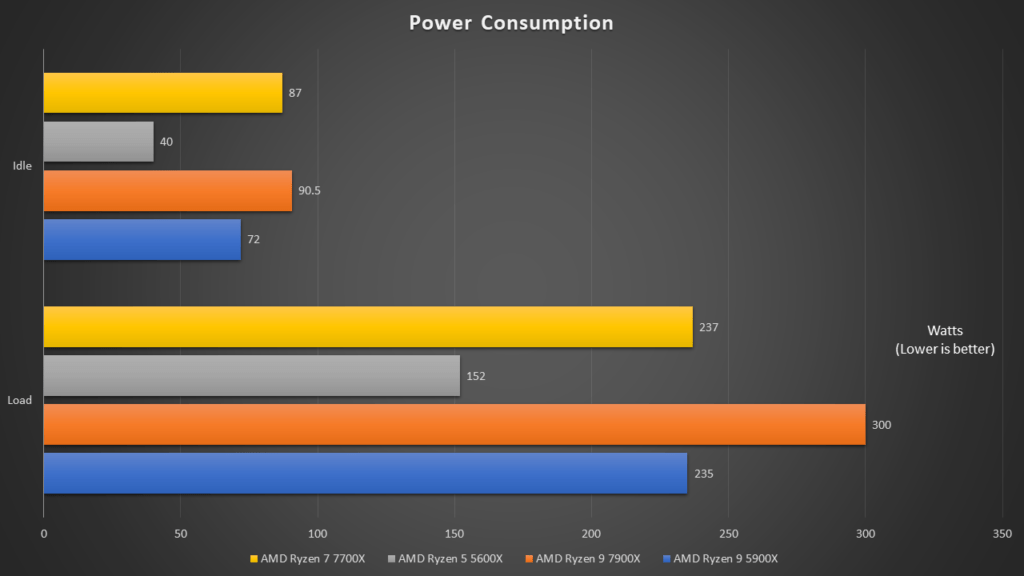 With the higher TDP ratings of the new Ryzen 9 7900X and Ryzen 7 7700X, the processors are running with a higher power consumption. At the same time, they are also pushing out more performance per watt, making the CPUs very efficient (as tasks can be completed quicker). Similar to previous generation’s Ryzen CPUs, the Ryzen 7000 series processors can quickly adapt to the system’s cooling capabilities and power headroom to push out as much performance as possible. With the higher rated TDP for each of the CPUs, most processors will run into a thermal wall before they hit a power wall.

In our setups, we saw how both the Ryzen 9 7900X and Ryzen 7 7700X are hitting the thermal wall, with its maximum temperature recorded at 95°C. AMD determines that the TJMax of the new Ryzen processors as 95°C. At the TJMax temperature, the both the Ryzen processors will be able to run properly at its highest performance without damaging the chip.

Technically, with a better CPU cooler, you should be able to push a lot more performance out from these processors. 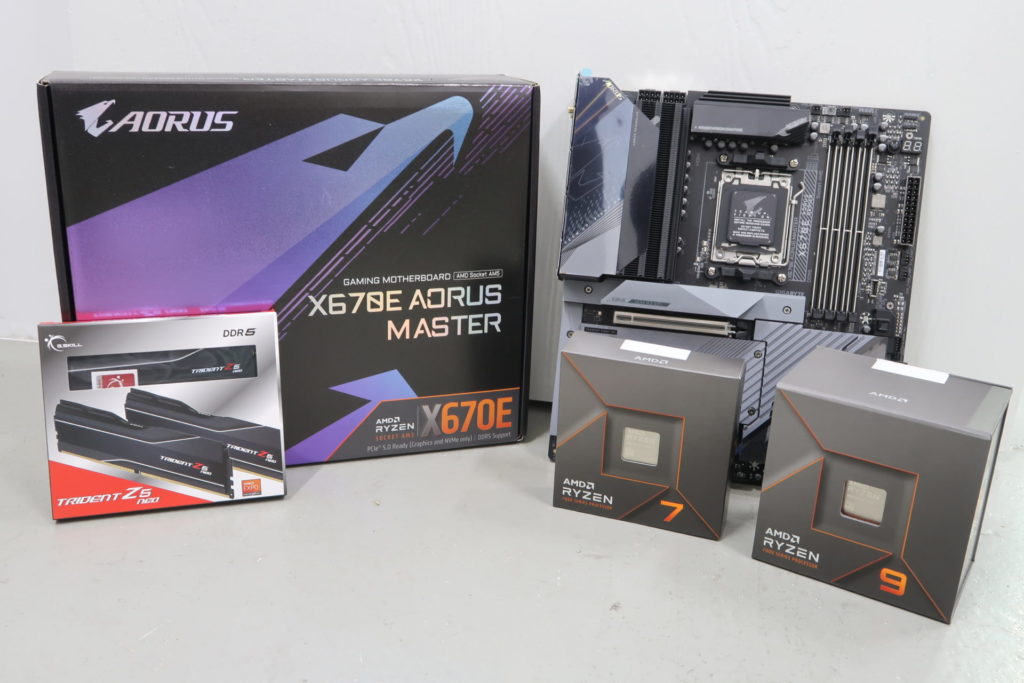 The new AMD Zen 4 CPUs deliver. With the adoption of a new and improved microarchitecture and upgraded process technology, AMD has successfully introduced a new processor to the market that is worth the upgrade for everyone, regardless of the use case.

The AMD Zen 4 CPUs has yet again pushed the boundaries of what is possible, spearheading the lead in the consumer CPU space. By setting the new benchmark for performance and efficiency, these new CPUs are here to stay. Without any hesitation, we would definitely recommend the AMD Zen 4 CPUs to anyone looking to build or upgrade their PC.

AMD Ryzen 7000 Series Pricing in Singapore and rest of SEA