With the introduction of the 12th Generation Processors and Z690 chipset, Intel has tried to bring DDR5 memory support to the mainstream. However, compared to current DDR4 memory, DDR5 is still considered costly, even though they do bring improved power efficiency and performance. Today, we’ve got hold on the GIGABYTE Z690M AORUS ELITE AX DDR4 motherboard to find out if there is actually any much differences between DDR4 and DDR5 memory in today’s application and usage. 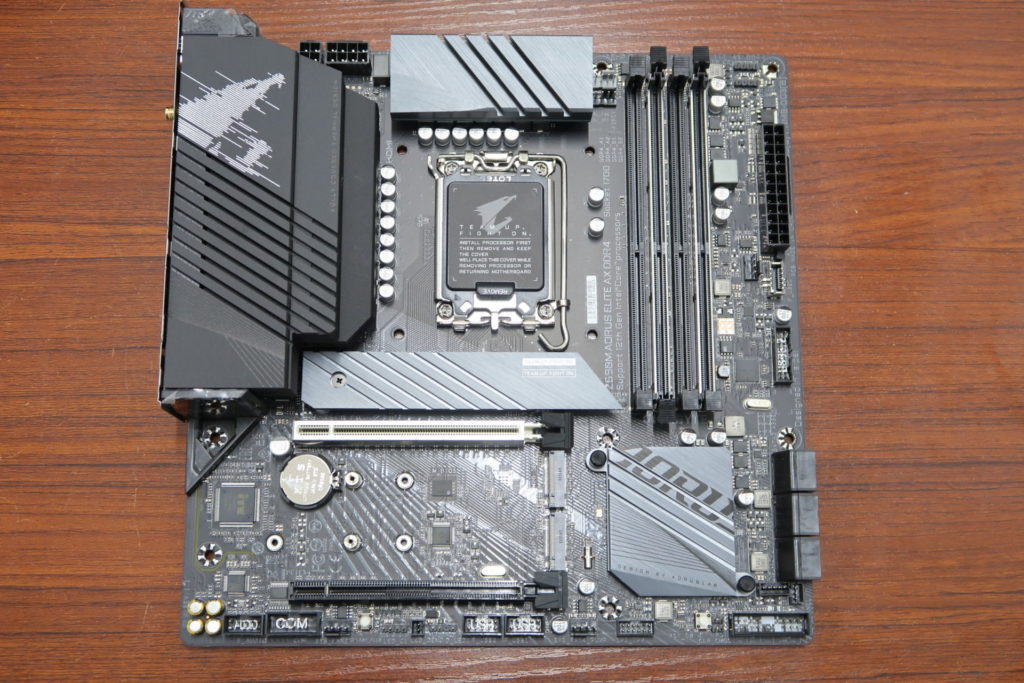 In terms of features, the GIGABYTE Z690M AORUS ELITE AX DDR4 comes with 4 x DDR4 DIMM slots, 3 x M.2 slots, 6 x SATA 6Gbps ports and even PCIe 5.0 support. It’s a great start for building a new PC for 2022 and beyond. Furthermore, as the name suggests, the motherboard also features Wireless AX built right onto the motherboard. For the usual users, this would be all that you want in a PC.

The GIGABYTE Z690M AORUS ELITE AX DDR4 still comes with a decent power delivery system. It has a Direct Digital VRM Design with a dedicated 12 VCore Phases that can bring 60A of power to the CPU. Regardless of the type of CPU you pair with the GIGABYTE Z690M AORUS ELITE AX DDR4, be it a entry level Pentium or a Core i9, you can be certain that it would be well supported.. Furthermore, GIGABYTE has also included a dedicated 1 VCCGT Phase and 2 VCCAUX Phases to power the Integrated Graphics Controller and CPU’s integrated PCIe/memory controller respectively. This power design endows the motherboard with any kinds of components or peripherals you would want to run on it. 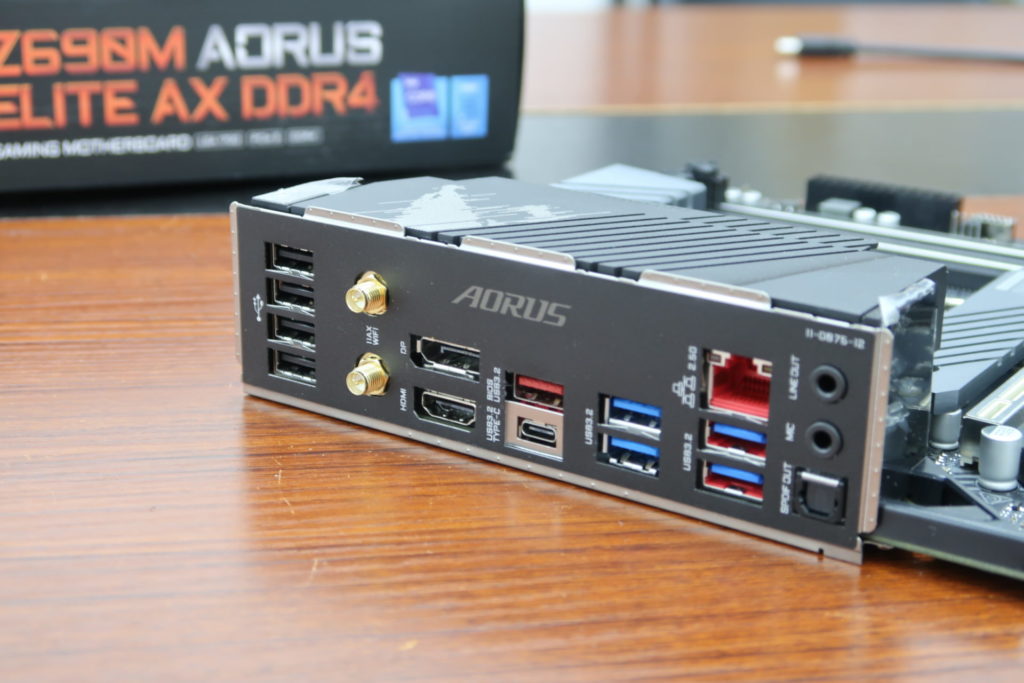 Don’t belittle the Micro-ATX motherboard, as it is designed to perform more that what it seems. At the I/O area, we spotted the GIGABYTE Z690M AORUS ELITE AX DDR4 with 4 x USB 2.0 ports, WiFi AX antenna ports, a Display Port and HDMI video/audio output ports, USB 3.2 Gen2 Type A and Type C port, 4 x USB 3.2 ports, a 2.5Gbps Ethernet port and lastly, audio in/out jacks and a SPDIF optical port. I’ve just got to say that this motherboard really has a crazy number of USB ports – a whopping 10 just at the I/O area, without considering the additional ports that can be connected via the onboard interfaces!

Just like other AORUS motherboard from the Z690 series, the GIGABYTE Z690M AORUS ELITE AX DDR4 still spots its signature monotone design that combines a black PCB with a gray gunmetal heatsink design. With a generally basic colour scheme, it makes the motherboard easy to pair with any computer chassis or peripherals. You can also easily customize RGB lighting on the peripherals and connected components to make sure that they stand out. 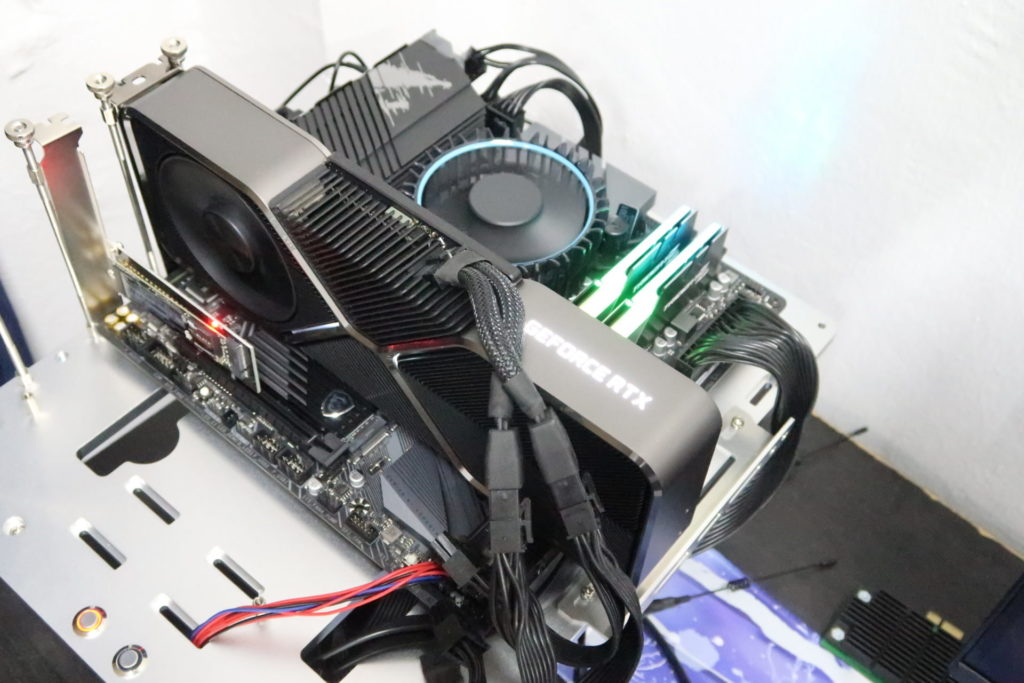 We compared the GIGABYTE Z690M AORUS Elite AX DDR4 with the GIGABYTE Z690 AORUS PRO which we’ve reviewed in the past. As both motherboard are from the same manufacturer, it should give us a good understanding of how different memory technologies can affect performance to both synthetic and real-world benchmarks. We will be going to test both systems with various applications, such as productivity suite from PC Mark, various professional benchmarks such as video rendering, video encoding/decoding, as well as games. 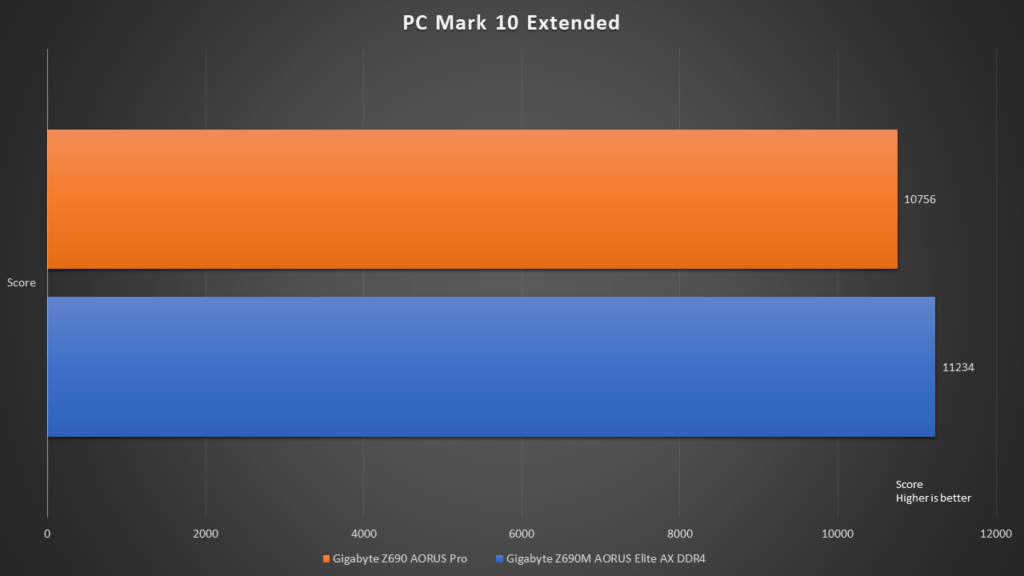 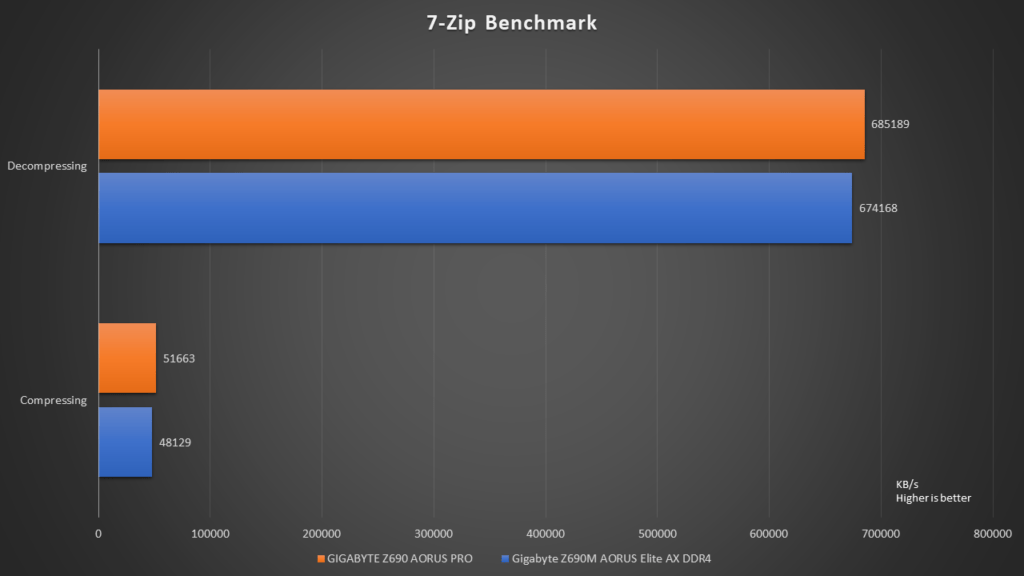 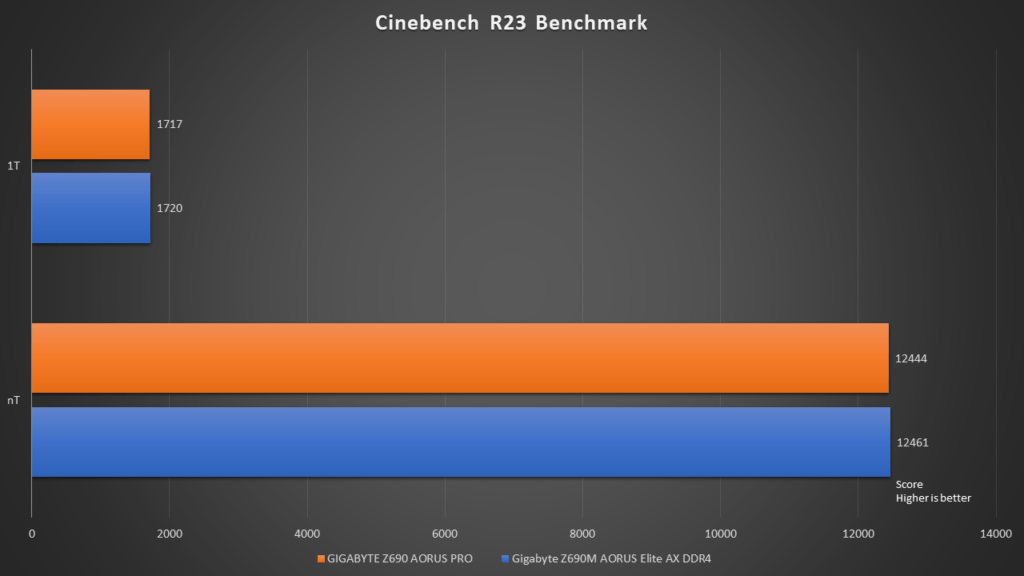 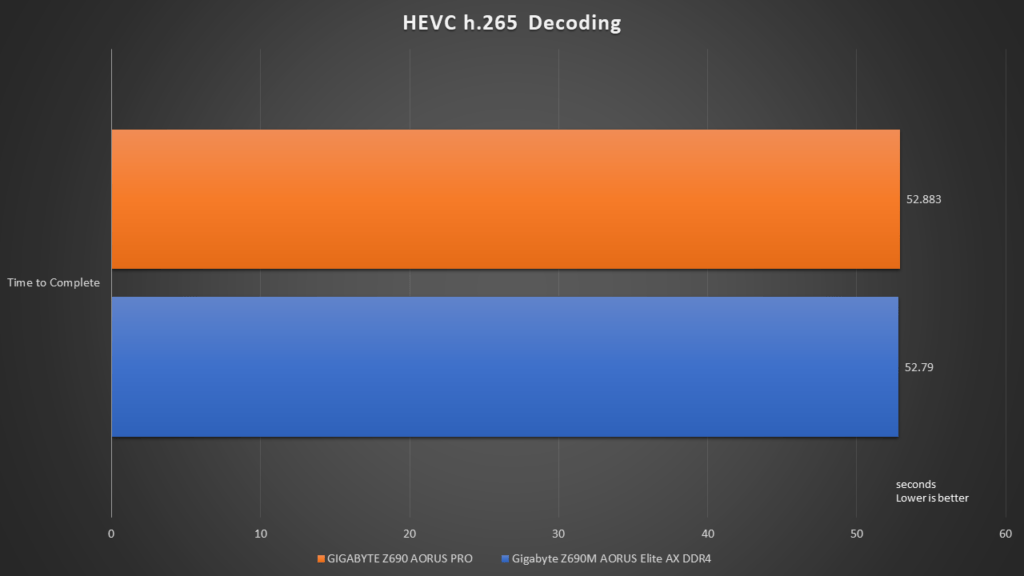 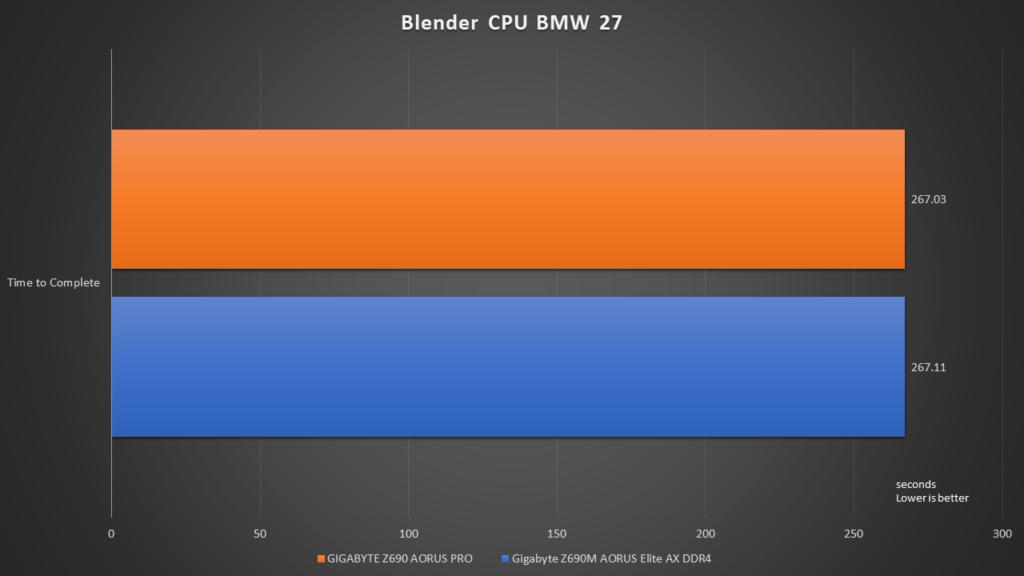 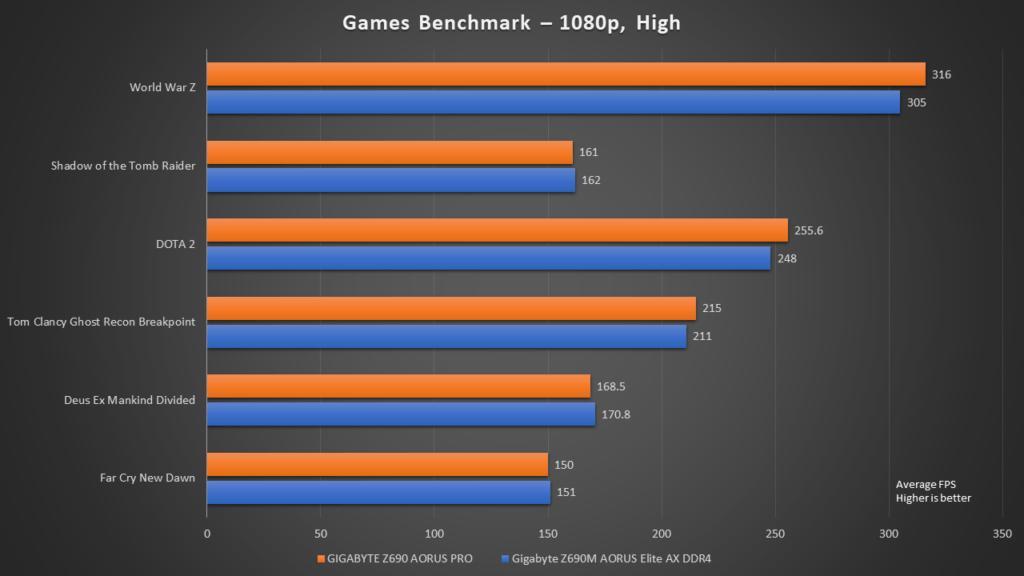 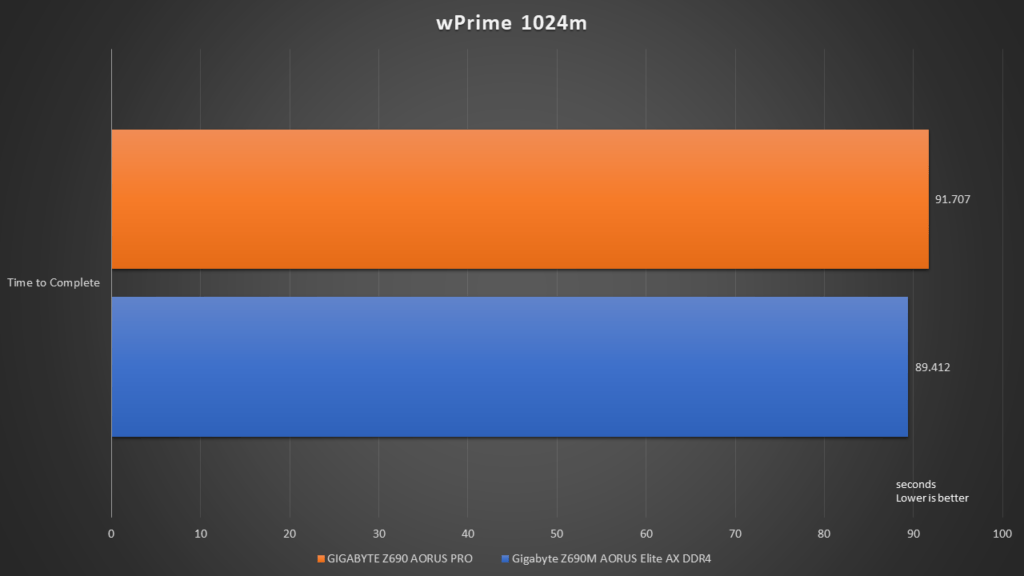 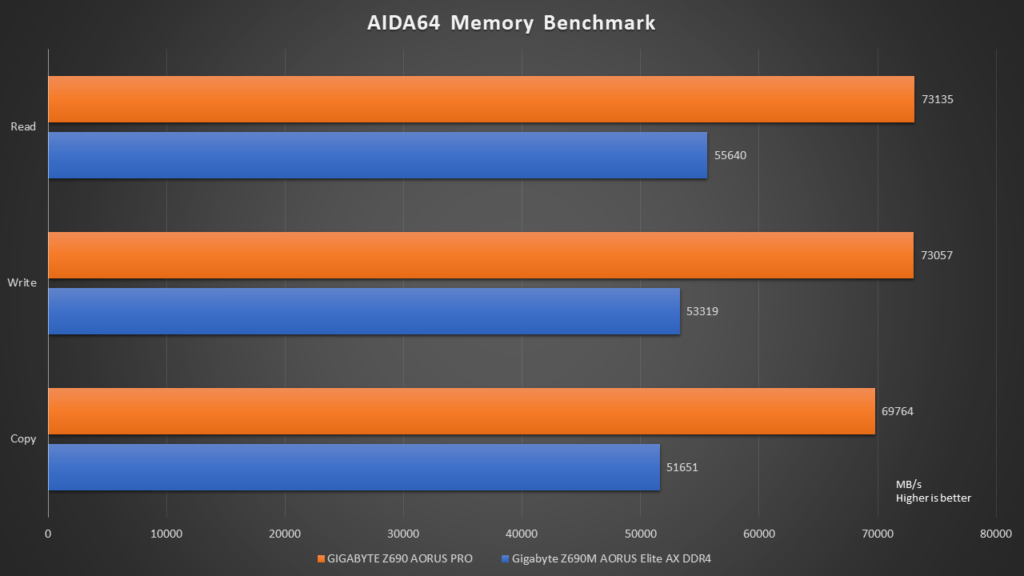 While running various benchmark tests on both motherboards, we found that regardless of DDR4 or DDR5 memory used, the performance was largely similar. The only obvious performance difference only came in on the AIDA64 Memory benchmark, which tests the raw performance of the memory modules. This essentially mean that in real world applications, or most of the applications that you will be running, you probably wouldn’t feel much of a difference.

With the tests, we can also see how capable the GIGABYTE Z690M AORUS Elite AX DDR4 was, even when compared to its bigger ATX brother, the GIGABYTE Z690 AORUS PRO. Both systems fared well and as expected, were able to bring out the best of its components attached. 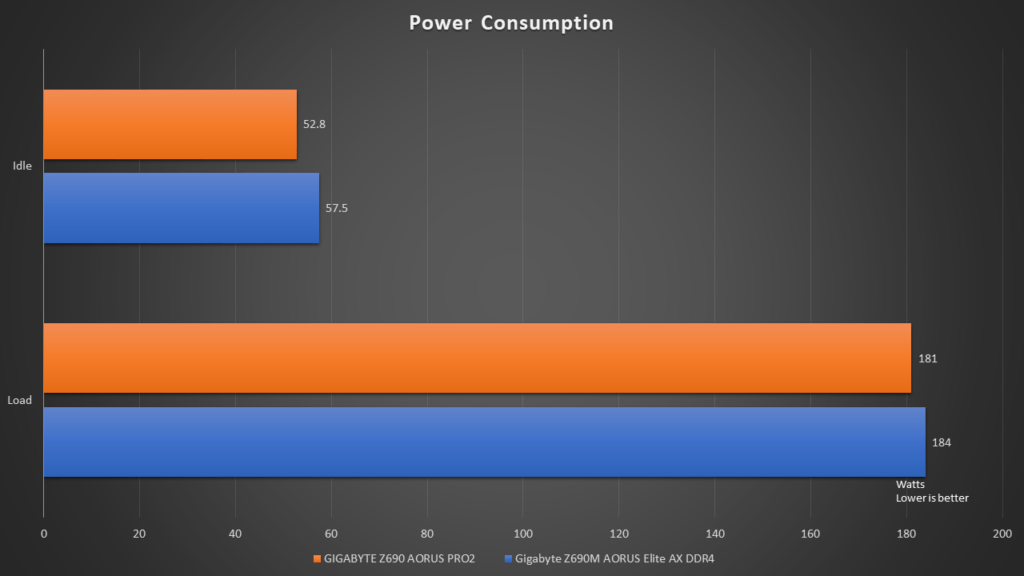 In our tests, we also found that the GIGABYTE Z690M AORUS Elite AX DDR4 has a higher power consumption rate. This could be attributed its use of DDR4 memory, which has a higher power requirement. However, the difference is considerably low, and should not affect your electrical bills too much, even in the long run. 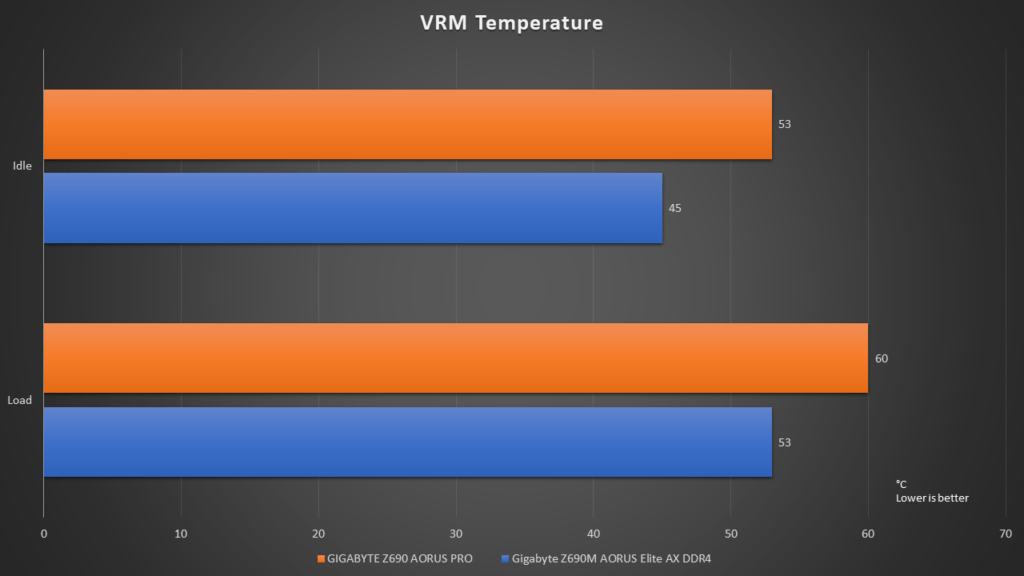 Despite its smaller form factor, the GIGABYTE Z690M AORUS Elite AX DDR4 did not show any forms of compromise. It was able to fully power the latest 12th Generation Intel processor without any hiccups, and still maintained great reliability and stability, while having its temperatures kept in check. Furthermore, the motherboard is also equipped with all the various features you would expect of a modern PC, such as Wireless AX support, 2.5Gigagit LAN and PCIe 5.0, making it a wise choice for being the building block for a new PC.

Certainly, if you do have plans to build a new PC with the 12th Generation Intel Core processors, the GIGABYTE Z690M AORUS Elite AX DDR4 is one that we would recommend.