Google Pixel 6 Smartphone Review – Would you pay S$999 for it?

With the announcement of the new Google Pixel 6 series in October last year, many fans were anticipating its arrival in Singapore. They were not disappointed, as Google has just recently launched both the Google Pixel 6 and Pixel 6 Pro here.

In this article, we are going to take a deep dive into the Google Pixel 6 smartphone, and see if it matches up to the modern smartphones in our labs. 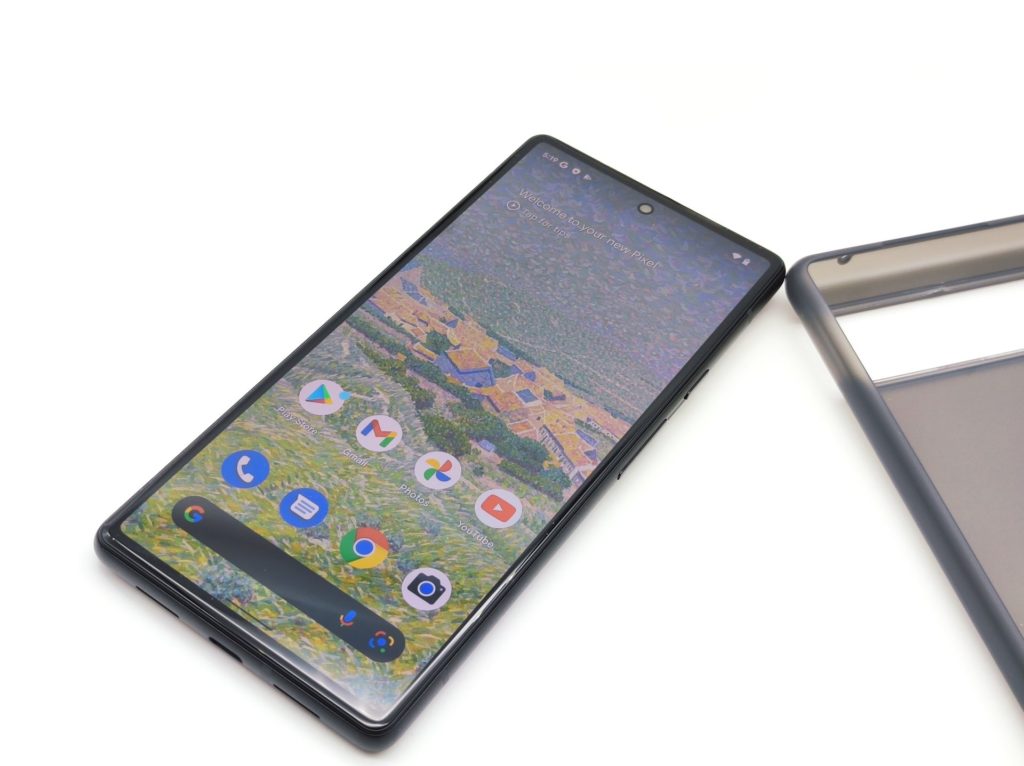 Just like any Google Pixel smartphone, the Pixel 6 retains the simple and minimal design. It’s also one of the reasons why the Pixel series remains to be one of the most well-known and popular smartphones of today. Putting performance aside, there is actually quite an audience that prefers something without the bells and whistles. A practical and down-to-earth smartphone like the Pixel 6 has got its fair share of fans as well.

Another benefit of having the Google Pixel 6 is that it is equipped with the latest version of Android operating system. For the Pixel 6, it comes with the latest Android 12. Google also promises that it will push new Android versions and updates to the Pixel smartphones for at least three years of software support.

The back of the Pixel 6 is covered with a piece of Corning Gorilla 6 glass that protects the smartphone from scratches. It also gives the phone a glossy and premium tone, while retaining its classic minimalist feel. Another thing to take note is that the Pixel 6 comes with a rather thick camera bump. This is so that it can house the smartphone’s high performance camera modules for the best possible photo quality that it promises to capture.

Regardless, the other parts of the phone still remain to be rather thin, and fits well in one’s hand.

At the bottom of the smartphone, we can only see the Pixel 6’s USB Type-C port which is used for both charging and data transfer. There’s also two holes here which houses the Pixel’s speakers and microphone setup.

The left side of the device houses the SIM card tray. Even though this SIM card tray only houses a single nano SIM card, it is actually a Dual-SIM phone. A separate mobile profile can be provisioned to the Pixel 6 via eSIM as well.

With the protective case, you won’t get as much fingerprint stains on the back of the Pixel 6. Moreover, the bulging camera module is also now recessed into the case, making it less susceptible to unintended scratches and damage. The whole protective case also wraps around the whole smartphone well, providing the protection that it truly requires.

Putting the design aside, we will now touch on the Pixel 6’s specifications.

Google has designed the Google Tensor SoC and introduced it on the Google Pixel 6 series of smartphone. It is a processor that is designed to handle Machine Learning workloads, which is starting to become more common today with the adoption of AI in mobile applications.

Other than that, just fully focusing on the specifications of the smartphone, the Pixel 6 is actually a very capable smartphone. It features a 90Hz OLED display, which assures the phone’s basic screen quality and display responsiveness. On that of that, it also comes with a decent amount of storage at 128GB, and even has 8GB of RAM. There is no doubt that the Pixel 6 is already well-equipped and capable of providing a decent usage experience.

When it comes to usage experience, we test out the smartphone’s responsiveness, audio qualities and display qualities.

Thanks to the 90Hz refresh rate on the Google Pixel 6, things on the smartphone appear a lot snappier than usual. Generally, it felt very smooth operating the Pixel 6, and there were no instances where the phone lagged or became unresponsive. 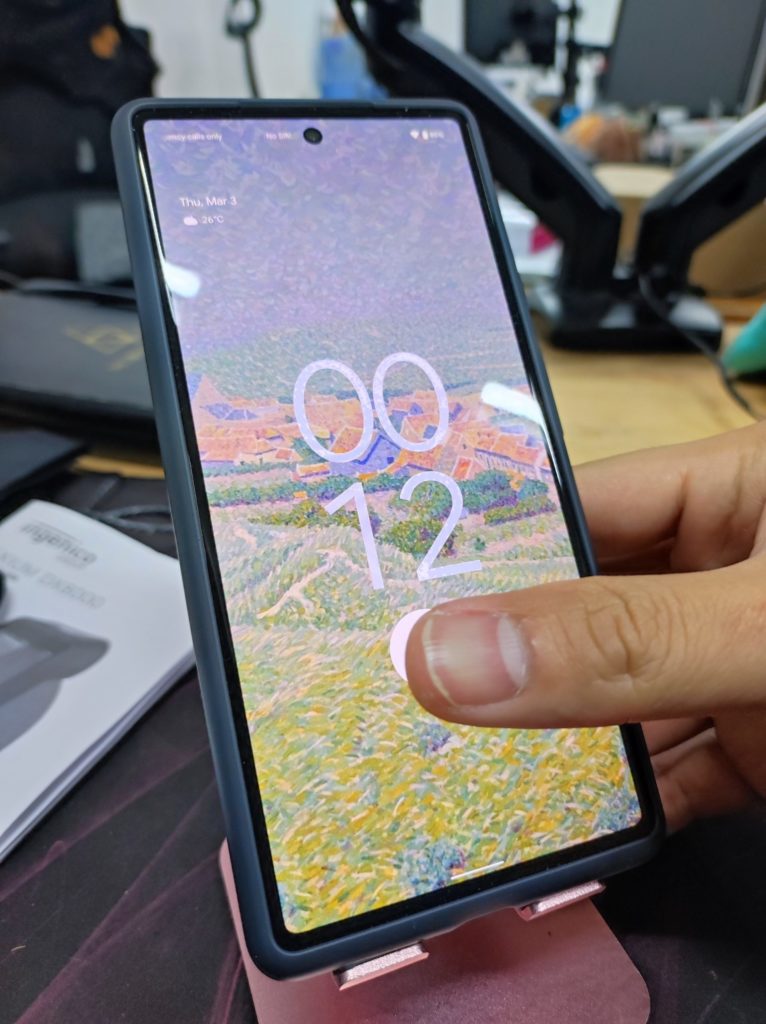 Moving on to media consumption, we got to say that the Google Pixel 6 has prioritized on what was necessary and was generally able to produce an excellent audio and visual experience to its users.

Firstly, the Google Pixel 6 features stereo speakers. In landscape mode, the Pixel 6 was able to give a superb audio experience that immerses you into the environment. It’s just like you are watching a movie or listening to music from your desktop computer or TV. Sometimes, you could even identity where the different parts of the sounds are coming from just from the sounds that were produced on the Google Pixel 6. You’ve really got to experience it to feel it.

Unfortunately, even though the speakers could give a “surround sound” effect, it was rather lacking in the lower frequency range of sounds. There was a larger focus on the mids and highs, which enabled a certain level of dynamicity that was focused on clarity, but the lack of the impact that the lower frequency provides is like a fly in the ointment.

As for the display, we’ve really got no complains. It works well. The images appeared sharp and vivid, and the glossy front glass just makes everything shown on the screen “pop”. As the Pixel 6 also uses OLED technology for its display, there was also an excellent contrast ratio. This has put a cherry of top of what’s already available.

In our camera tests, we will compare the Google Pixel 6 with my daily driver – the Xiaomi Mi 11 Lite NE 5G.

In the daylight landscape tests, we saw that the photos taken from Pixel 6 seems to produce more details and sharpness than the Xiaomi 11 Lite NE. In terms of  colour, the Xiaomi Mi 11 Lite NE appears to be more vivid, while the Pixel 6 had selected a generally brighter tone.

For portraits, the Pixel 6 produced a more natural photo. It was in high detail level and quality, unlike the one from Xiaomi Mi 11 Lite NE which seemed to apply a filter across the skin tone to achieve beautification effects.

For objects, we can see that the Google Pixel 6 always produced more details, even though its images could be seen as slightly “darker” than comparison. This can be seen on the muscles and tone of the body of “The Thinker”.

Similarly, the colours of the photos still were still more vivid on the Xiaomi Mi 11 Lite NE than those on the Pixel 6. We’ve got to say that the Pixel 6’s photos had a better representation of what was actually in real life.

In terms of the night shots, both phones did well. However, the Google Pixel 6 produced photos with more details even at night. So we’ve got to give the point to the Pixel 6 for this one.

The Google Pixel 6 excelled in our Video Stability Test. The video remained very stable throughout the test period, while the Xiaomi Mi 11 Lite 5G showed a lot of visual artifacts which caused the degradation of quality of the footage. We can also see how jittery the images were on the Xiaomi Mi 11 Lite NE, which really showed how well the Google Pixel 6 performed on this test. 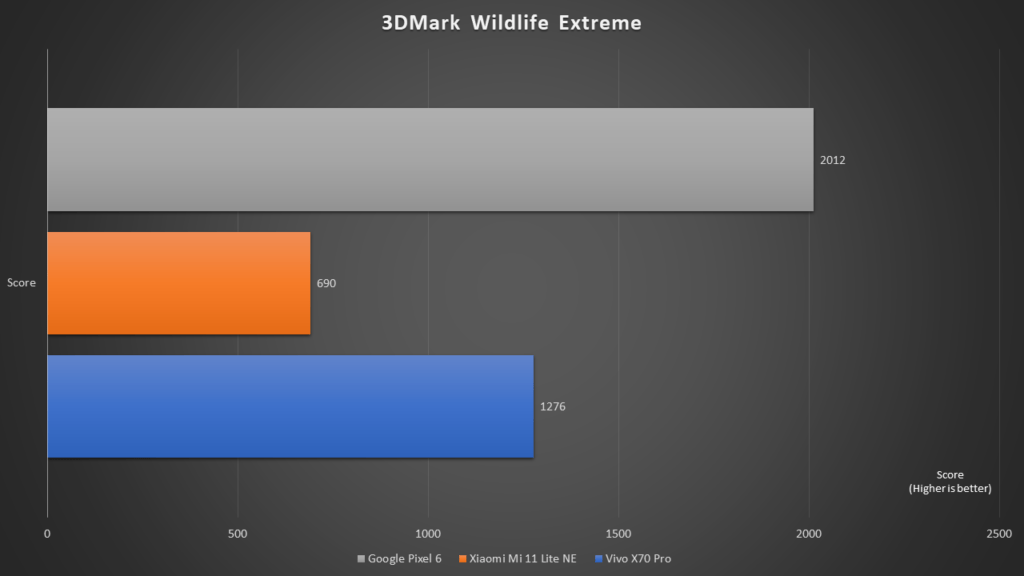 In the graphics 3DMark Wildlife Extreme test, the Google Pixel 6 came out on top, showing its graphical processing capabilities which was significantly faster than the other smartphones in comparison. 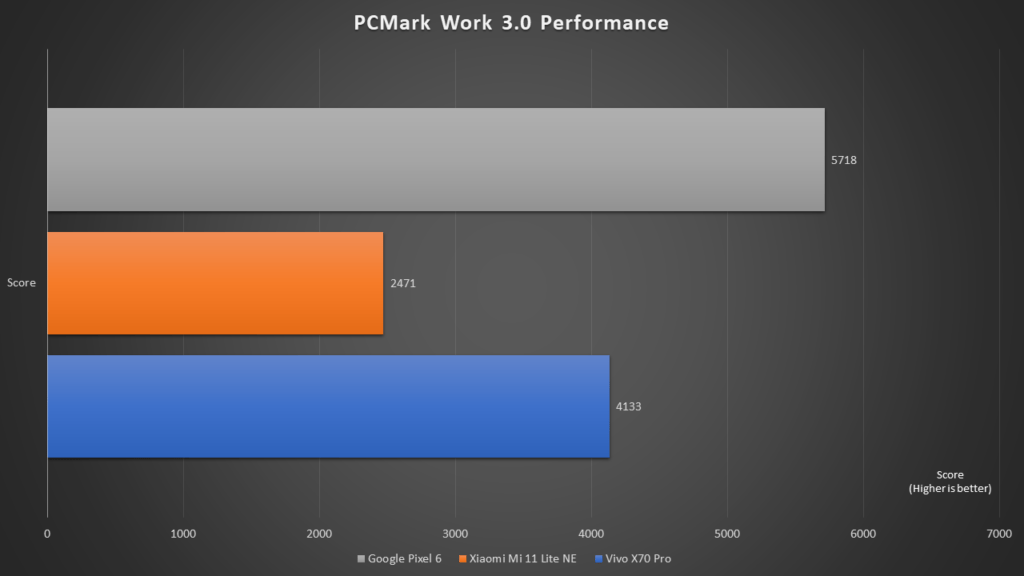 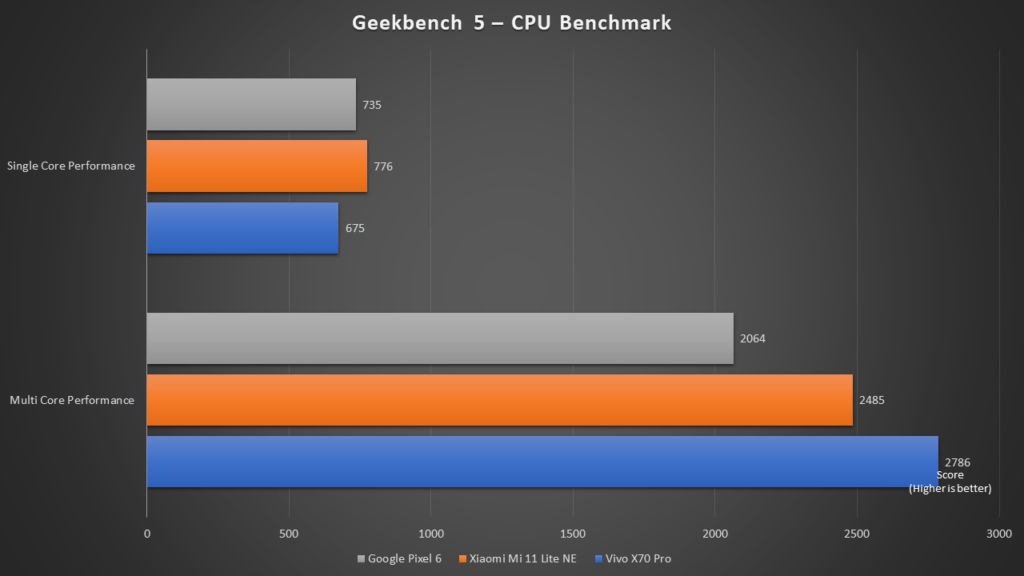 However, when it comes individual component test, the Google Pixel 6 falls behind. It didn’t perform as well in the multi-core test. This could be due to the unique unique 2+2+4 (big, middle, little) CPU configuration as compared to 1+3+4 on the Xiaomi Mi Lite and Vivo X70 Pro. 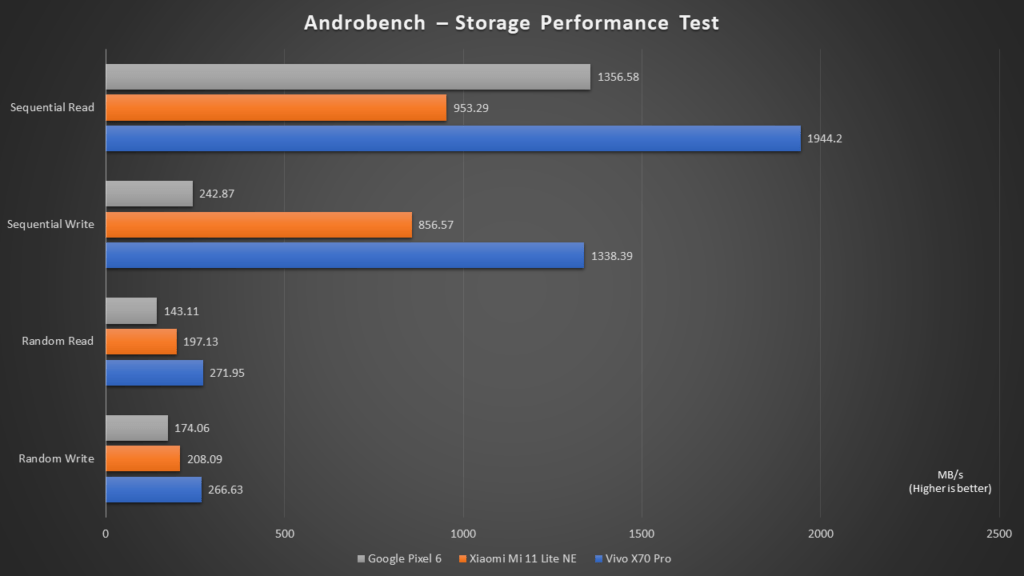 On the storage end, as the Google Pixel 6 only uses UFS 3.1 storage, it also lacked behind competition. However, this does not mean that it doesn’t perform well, as storage was not the limiting factor of overall performance of the device. 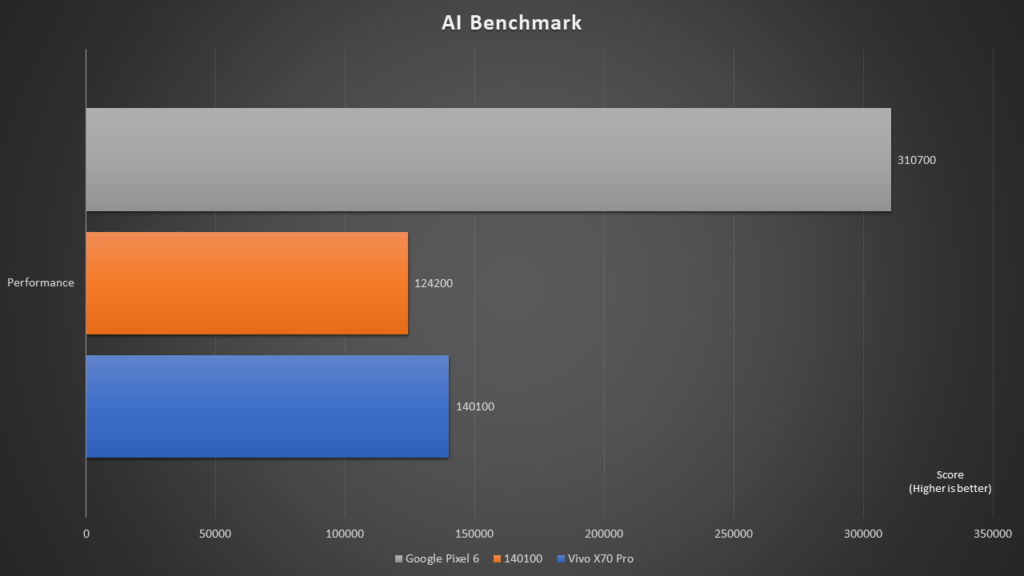 No doubt, when it comes to AI training and inferencing, the Google Pixel 6’a Google Tensor processor shined. It was tested to be more than two times faster than the processor of the Vivo x70 Pro smartphone. This AI optimized smartphone processor is ready for the future with more mobile applications moving towards AI based inference computation.

In the PCMark Work 3.0 Battery Test, the Google Pixel 6 managed to achieve a battery life of 11hrs and 12 min. This is quite decent, considering that we can definitely utilize the Pixel 6 for a full (active) day without the need for charging.

The Google Pixel 6 currently retails at S$999 and is available for purchase at the Google Store. So back to our question in the title – is it worth to spend S$999 on a the Google Pixel 6? Judging that the Google Pixel 6 has been well designed as a product to offer the ultimate Android experience, and that there aren’t really much to complain about it unless we nitpicked, we certainly think that the price is justifiable.

With premium smartphones today costing way beyond the S$1000 mark, in comparison, the Google Pixel 6 looks like a very good deal indeed.

For an advanced camera system that takes very decent and high quality photos, together with its superb entertainment capabilities, the Google Pixel 6 is a compelling buy for anyone who has the S$1000 budget for a brand new smartphone. It has probably got everything you want in a smartphone, and a few other features (such as its high performance AI compute capabilities) that makes it stand out from competition. It’s also highly usable and practical smartphone, with battery life that can last a full day and fast charging capabilities to get you back at it when you need it the most.

Without any doubts, we will recommend the Google Pixel 6 smartphone for anyone looking for a new smartphone in 2022.