GIGABYTE has been putting a lot of effort in coming out with more products in the market. Particularly in the gaming notebook lineup, we’ve seen how well they’ve done with the AORUS 15G, bringing a rather unique experience with the introduction of real mechanical keyboard onto a portable gaming machine. However, not every gamer wants to splurge on the latest and greatest. That is why, GIGABYTE also released the new AORUS 5 Gaming Notebook.

The AORUS 5 Gaming Notebook is not a product that aims to be the best product out in the market. Instead, it focuses more on bringing the bang for the buck to gamers, while ensuring that performance levels are still met. It costs much lesser than the other flagship gaming notebook products out in the market, and would be a good contender for those who are on a budget. However, before deciding to actually make the purchase, let us keep you more informed of what the AORUS 5 Gaming Notebook is all about.

In this article, we are going to take a closer look at the AORUS 5 Gaming Notebook. We will put this machine to the test, and see how it performs as compared to its more expensive bigger brother, the AORUS 15G. 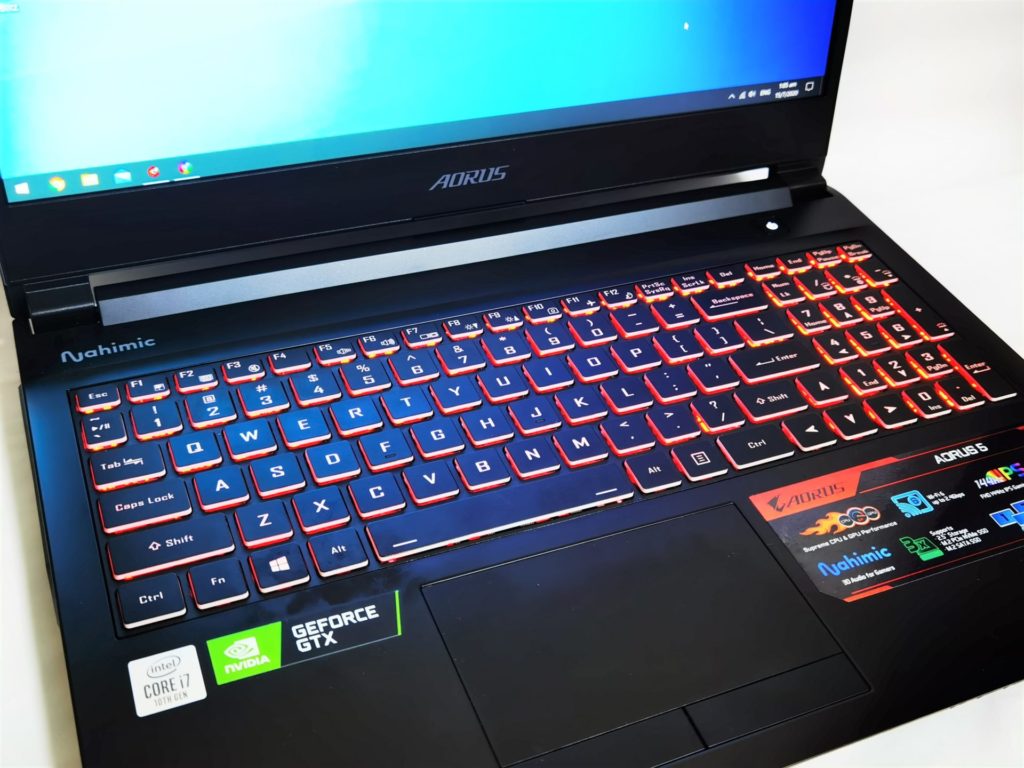 The AORUS 5 comes with a rather typical “Gaming Notebook” look. What I mean by this is that it is black themed with hints of RGB. Luckily, GIGABYTE didn’t go overboard with the design, and the AORUS 5 still looks rather simple. It can be considered rather boring since it looks just like any gaming notebooks out there, but it’s just how the way we like it to be. Sometimes, we just need something to perform well, rather than something that’s different. 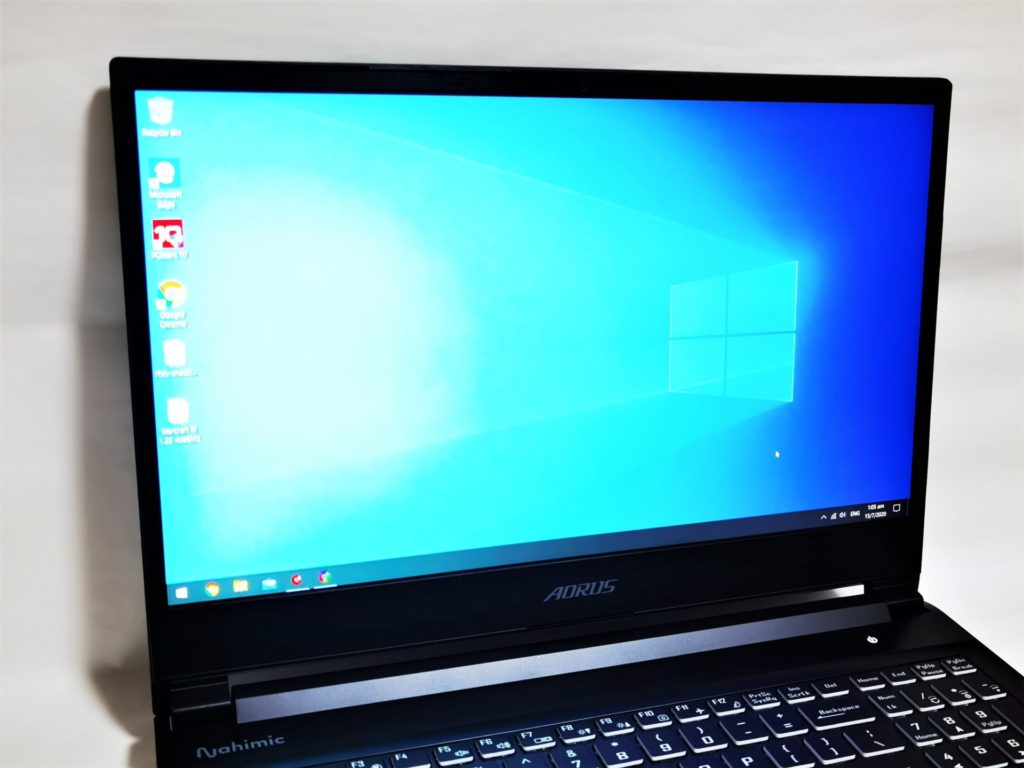 Of course, likely due to product segmentation and cost control, the AORUS 5 also does not come with the premium bezel-less design. However, the bezels should still be considered as quite thin, and shouldn’t affect gaming experience at all. Moreover, in order to fit more hardware within such a small space, the designers also had to increase the bottom space of the LCD panel in order to make sure that the lid can cover the whole body of the notebook. The benefit of this design is that we also can get a larger trackpad.

Thankfully, the AORUS 5 still ensured that usability is remained a priority. Instead of placing the webcam below the display just for aesthetic reasons, we still can spot the webcam above the display. We also took note that this webcam does not come with a privacy guard.

Speaking of usability, the AORUS 5 definitely aims to check the box of the requirements of a gaming PC today. It also comes with a 144Hz refresh rate FullHD display. This made the whole notebook seem to operated very smoothly. Of course, coupled with other high-end components, such as the Intel Core i7 processor and NVIDIA GeForce GTX GPU, the AORUS 5 is by no means like any other simple machines out there. Full specifications are attached below.

On the left side of the device, we can find 1x USB 3.0 port, followed by 1x USB 2.0 port. Next to these ports are the Audio and Microphone combo jack.
On the right side, the AORUS 5 spots another USB 3.2 port, a Mini Display port and SD Card Reader.

Interestingly, the AORUS 5 also has quite a number of ports at the rear of the device. Here, we find the notebook’s USB Type-C port, which is actually also a Display Port, a HDMI 2.o port, Gigabit Ethernet port and lastly, the DC-in jack.

From the bottom of the device, we can see how well ventilated the AORUS 5 is. Cool air is largely drawn in from the bottom of the device and expelled through fans at the rear and side vents. Another cool thing to take note is that the AORUS 5 actually comes with a removable battery! That’s something quite rare in today’s standard. This is a 48.96Wh Lithium Polymer battery.

Instead of needing to run around looking for a power source to power your device, you could perhaps purchase a few of these batteries and pop them into the AORUS 5 to get going again when your battery runs low. You will probably need quite a number of these, as the AORUS 5 doesn’t have good battery life. Based on casual usage, it only managed slightly more than 4 hours of usage per charge. On PCMark 10 Battery test, with a Modern Office workload, it got rating of 3h 9min for its battery life. 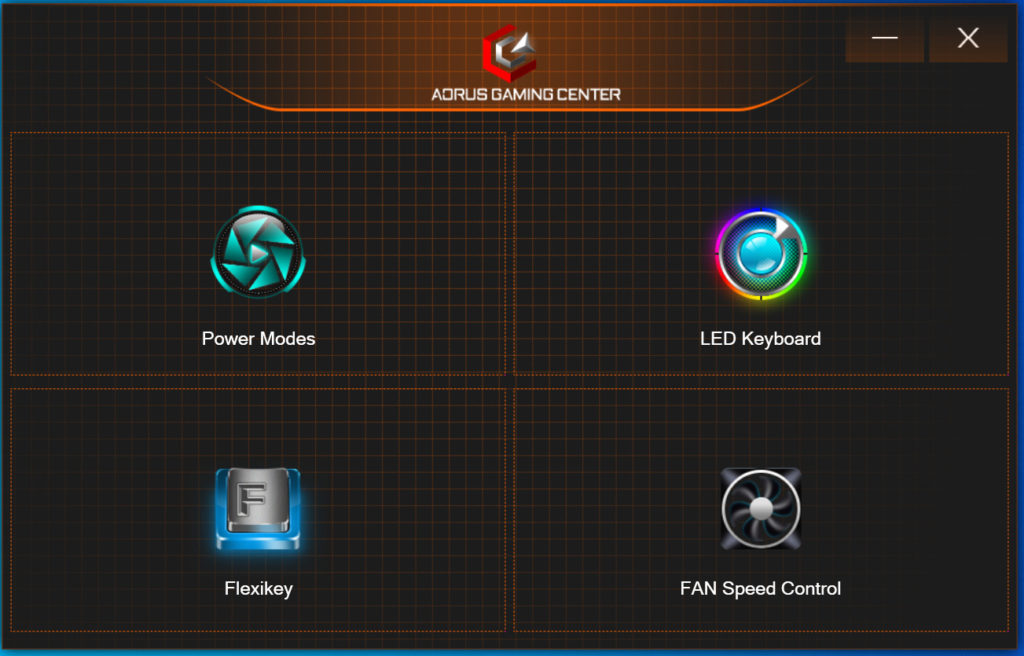 Instead of needing to download multiple software utilities, it’s nice to see that GIGABYTE has consolidated everything useful into a single control panel. Known as the AORUS Gaming Center, this utility acts as a menu screen to 4 other key features. 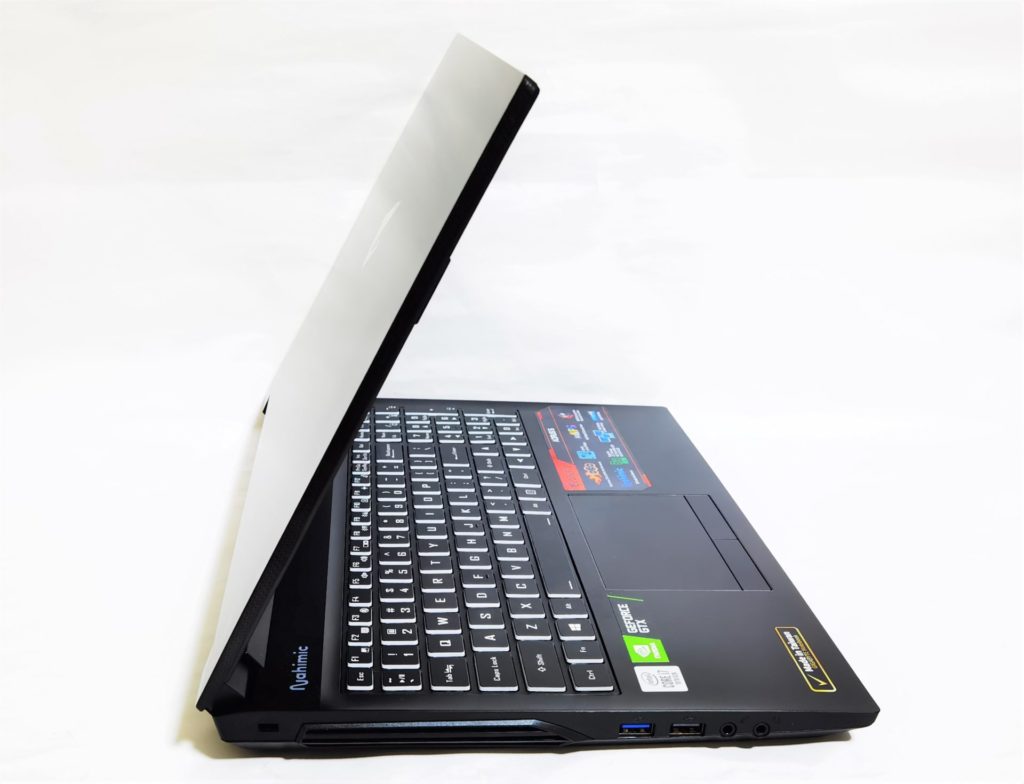 The AORUS 5 Gaming notebook simply works. After a few gaming sessions with the AORUS 5, everything ran smoothly and I honestly have to say that it was able to reach the mark of providing a great gaming experience. I can appreciate the high refresh rate display, regardless when I’m playing fast paced games or slower strategy games. A 144Hz display just makes the whole gaming experience so much better.

Moreover, the display also is rated to have a considerably good colour accuracy of just under 100% sRGB colour space, and a wide colour gamut of 72% NTSC space. It could be useful for those who also require a certain degree of display colour accuracy for their day to day work.

Even though it hasn’t got the best speakers that we’ve tested, it’s generally good enough for games and media consumption. To be specific, the speakers can produce sounds of acceptable clarity, with more focus on the mids. However, it lacks the ability to produce impactful bass and highs feel very restrained.

While we’ve largely talked about this notebook’s good points, there are definitely two glaring problems which we experience on the AORUS 5. Firstly, the fans on this system can get quite loud. As the system heats up in games, the fans will also ramp up significantly. I guess it wouldn’t affect all gamers, as you can simply adapt to this problem by putting on headphones.

Secondly, we found the heat produced by the system to be rather high. While this is testament of the cooling system’s ability to remove heat from the key hardware components, the heat it produces doesn’t give gamers a good experience. While reaching out to the WASD keys, you will definitely feel the heat as it is expelled by the system from the sides of the machine. 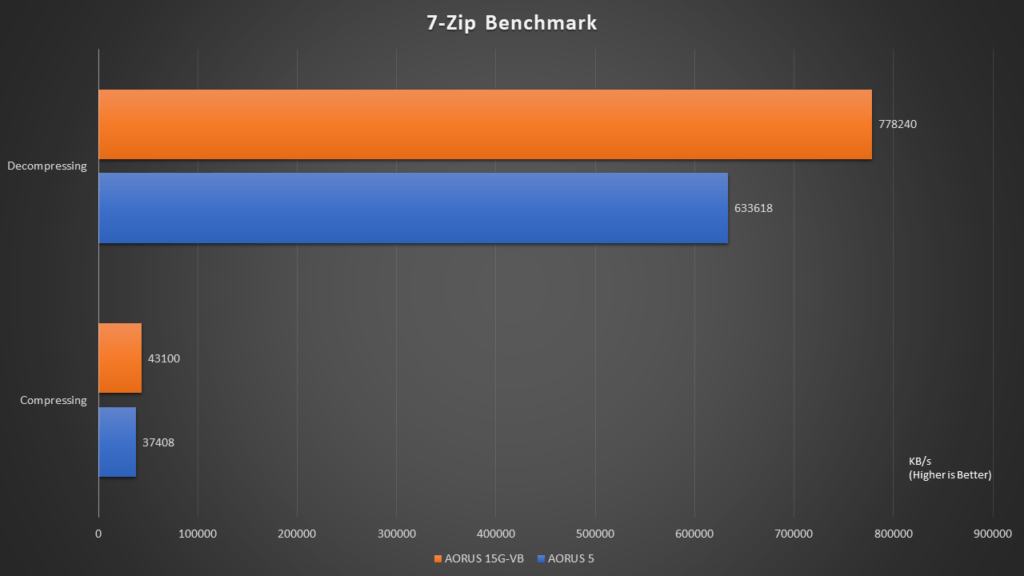 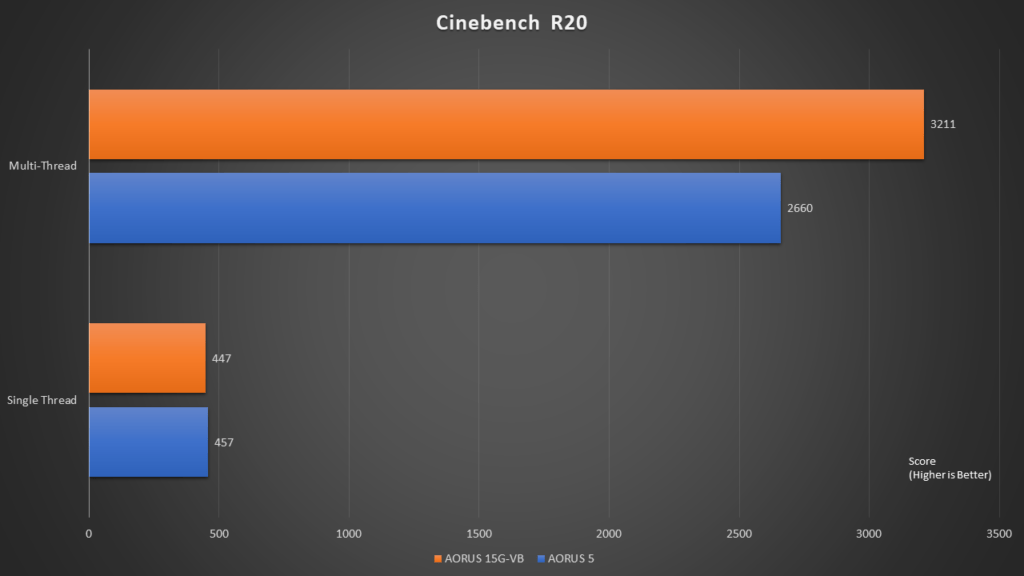 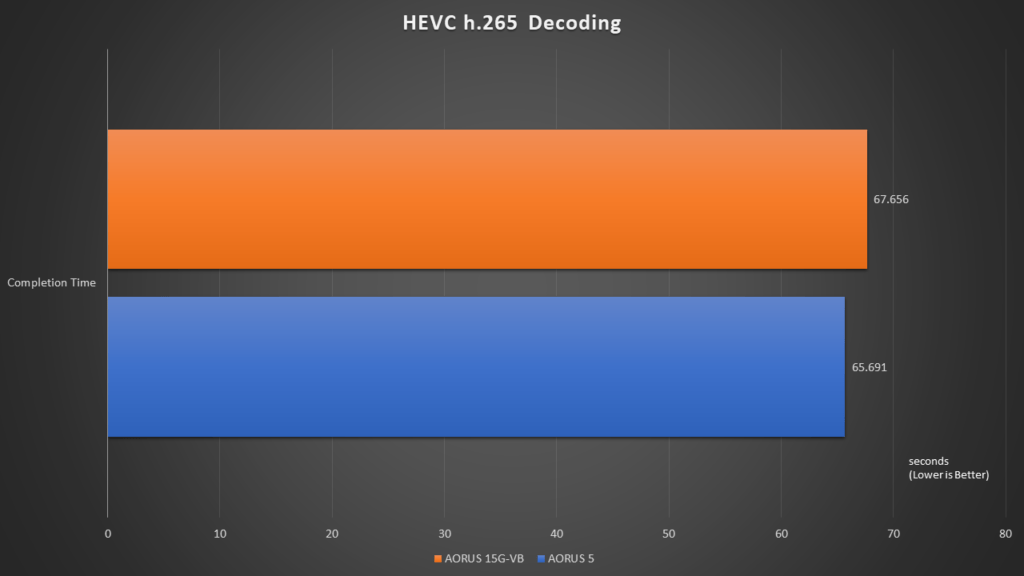 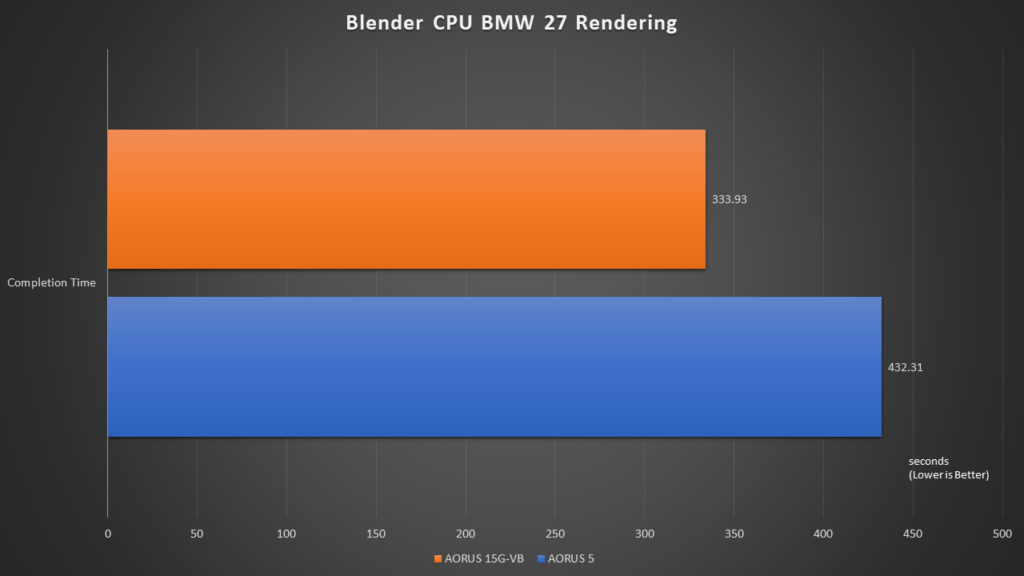 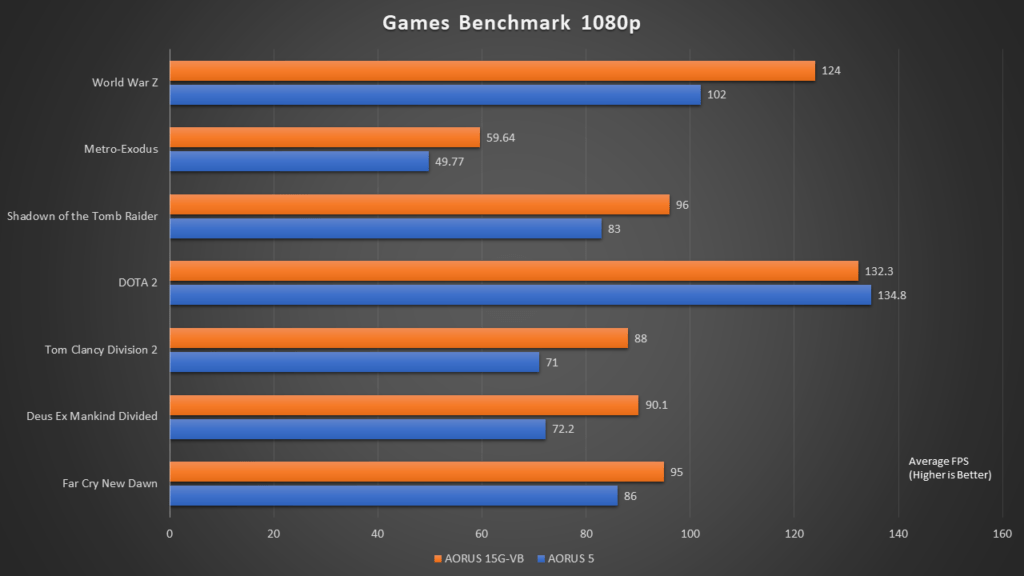 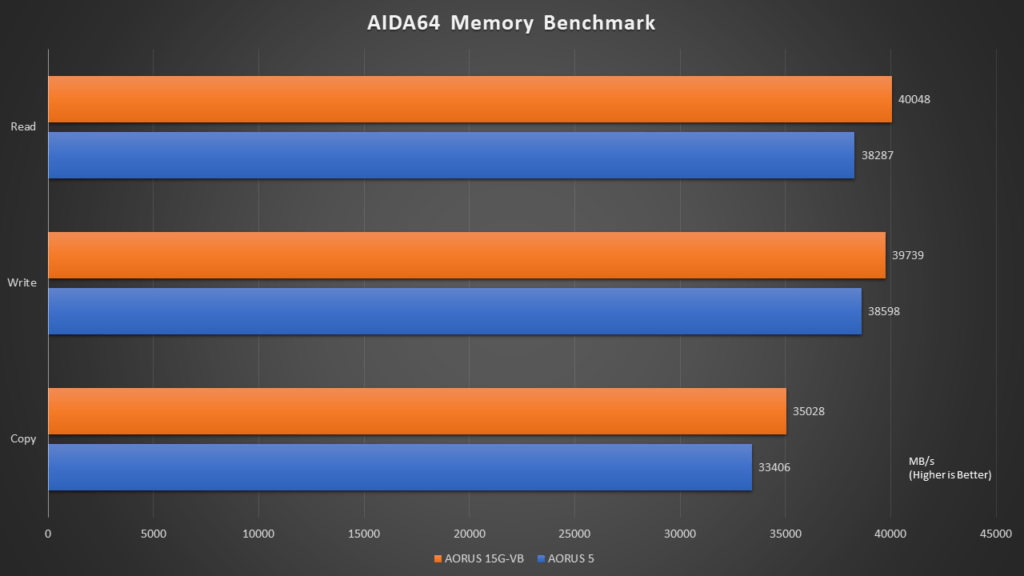 No doubt, the AORUS 5 is slower than its bigger brother AORUS 15G in almost every single test we’ve given it. There is no question that the higher end hardware components found on the AORUS 15G is expected to perform better than the AORUS 5.

However, when you put things into perspective, while the AORUS 15G does run fast, the AORUS 5 isn’t that bad either. Focusing on the game results, AORUS 5 still managed to reach more than 60FPS in most of the games. Regardless, must give it to the AORUS 5 and say that it’s still a very capable machine. 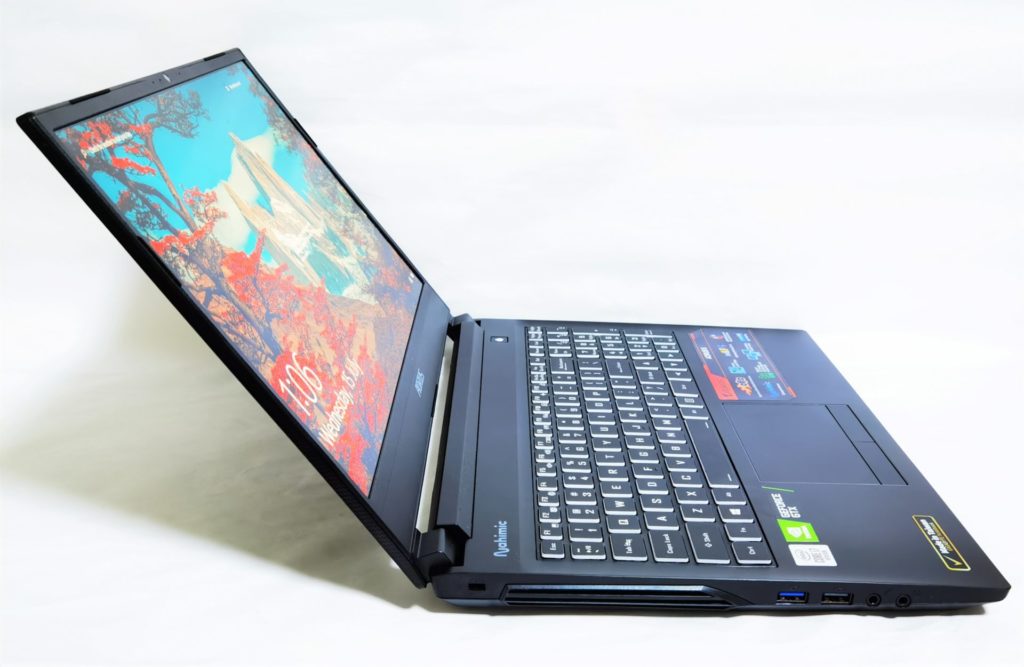 If all you want is a gaming system that’s capable of reaching more than 60FPS in most games, while remaining very affordable, the AORUS 5 is a great choice. As mentioned in our introduction, the AORUS 5 is not the typical high-flyer wants aims to be the best of the very best. It just aims to be a modest gaming system that simply works. Based on our tests, that is just the case. Moreover, with some of its more premium features such as being equipped with a 144Hz display panel, I’m quite sure that you will enjoy your time gaming on the AORUS 5.

Most importantly, the AORUS 5 doesn’t break the bank like any other gaming machines out there. Since it’s less than half the price of an AORUS 15G and still meets the mark when it comes to gaming performance, it’s definitely an affordable gaming notebook to look out for.

Xiaomi's Redmi 9A Arrives in Singapore