When AMD first announced the introduction of PCIe 4.0 interface on the X570 chipset at COMPUTEX 2019, they also stirred up innovation in the SSD space. With the new interface, SSDs now have more bandwidth to operate, and we are seeing many new high performance SSDs with speeds that were unheard of.

Even though AMD has gained significant market share in the consumer PC space, most of the PCs are still based on a chipset that only supports PCIe 3.0. What if they would also like to have a crazily fast SSD drive for their PC? What options do they have?

This is where the AORUS RAID SSD 2TB AIC(Add-In-Card) fits into the market. The new SSD AIC from Gigabyte still comes with the PCIe 3.0 interface. To ensure maximum performance and compatibility, this AIC configures 4 x M.2 NVMe SSD in RAID 0 mode to provide 4 x the performance of a standard M.2 NVMe SSD.

The AORUS RAID SSD 2TB comes in a rather simple design. Despite physically having a full-sized PCIe x16 slot, it only operates at PCIe 3.0 x8 mode. Installing the SSD onto the motherboard is very straightforward – simply plug and play, and the motherboard will recognize the new SSD drive.

To keep the whole SSD setup cool, an unique thermal design is created for the AORUS RAID SSD 2TB.

Combining both active and passive cooling methods, the AORUS team managed to achieve a 30% lower temperature than just having a bare AIC. This is achieved by a metallic baseplate, high thermal conductivity pad, high density heatsink and a blower fan.

This ensures that the whole SSD AIC can perform at its optimal performance in a stable condition, and also prevents any kind of thermal throttling on the SSD. 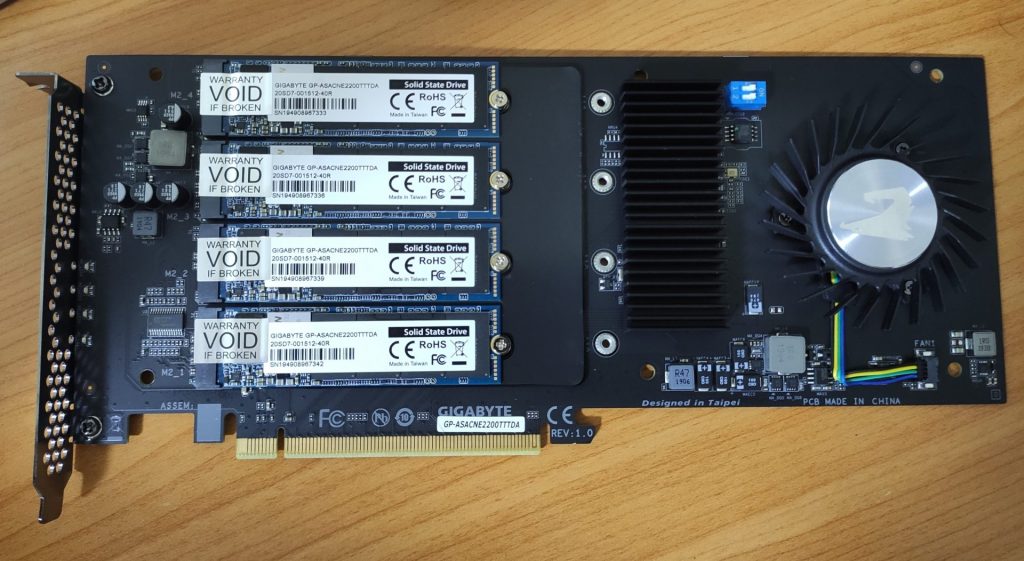 The AORUS RAID SSD 2TB is equipped with 4 x 512GB M.2 NVMe SSD in RAID 0 configuration. This is enabled by the MARVELL 88NR2241 Intelligent NVMe Switch, which is an enterprise class RAID controller. The 4 SSDs are virtualized into a single logical unit in RAID 0, making it completely transparent to users. 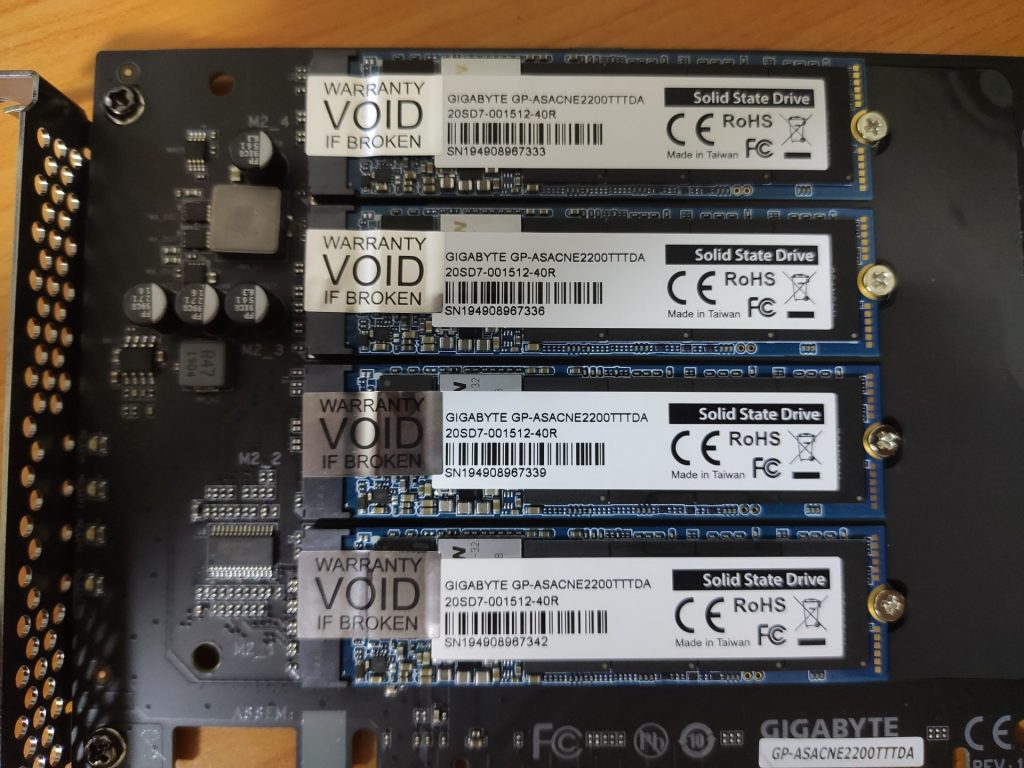 Each individual SSD is equipped with 3D TLC NAND that is managed by a Phison controller. The SSD also comes with 512MB of cache to ensure optimal performance across all drives. 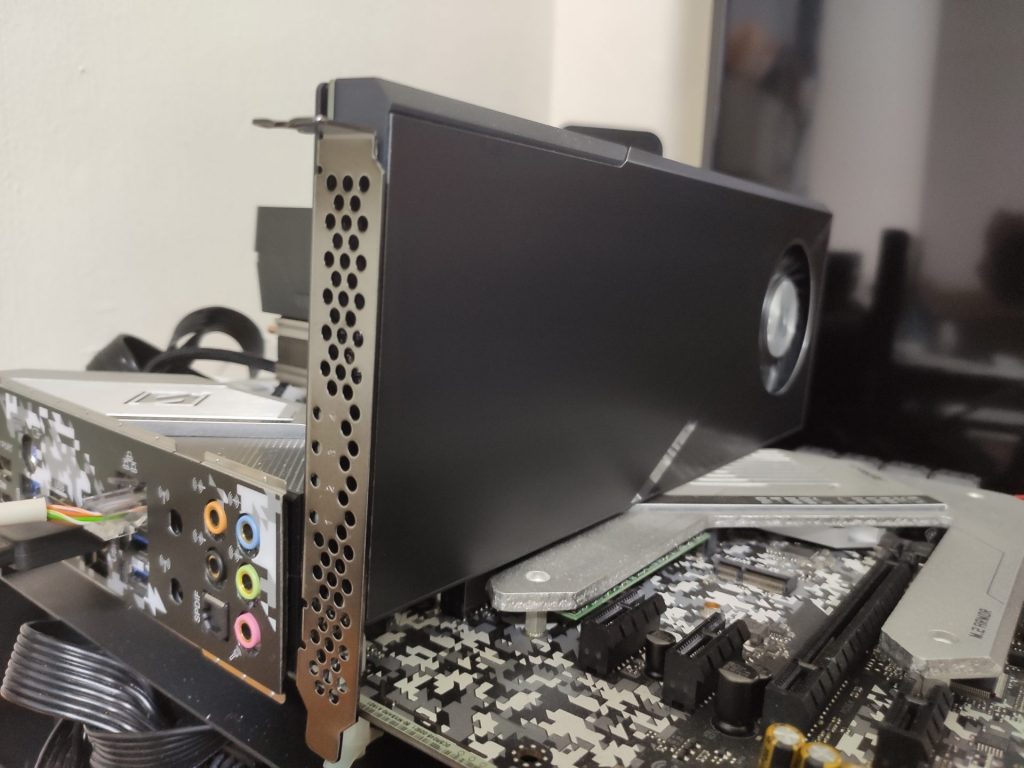 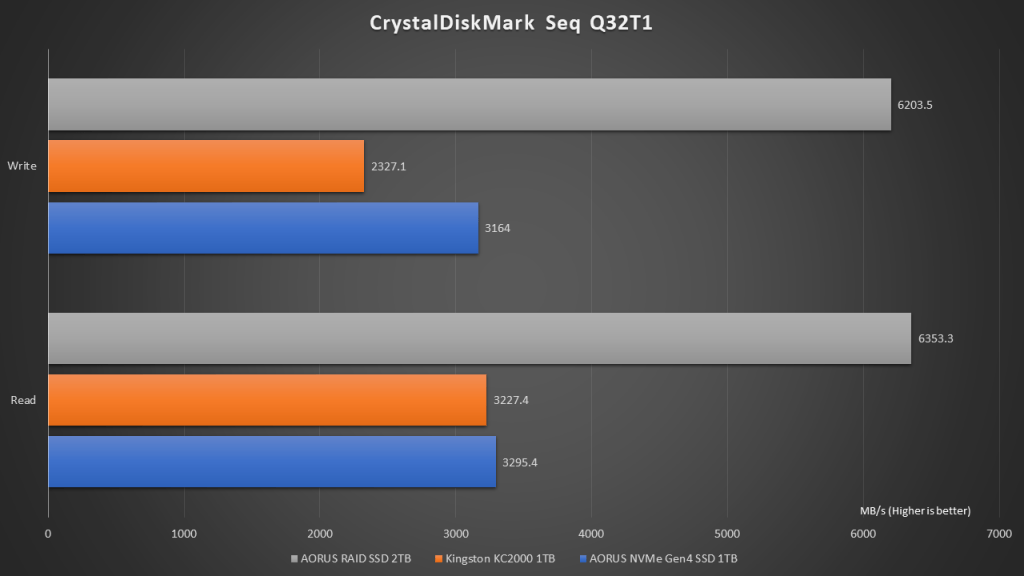 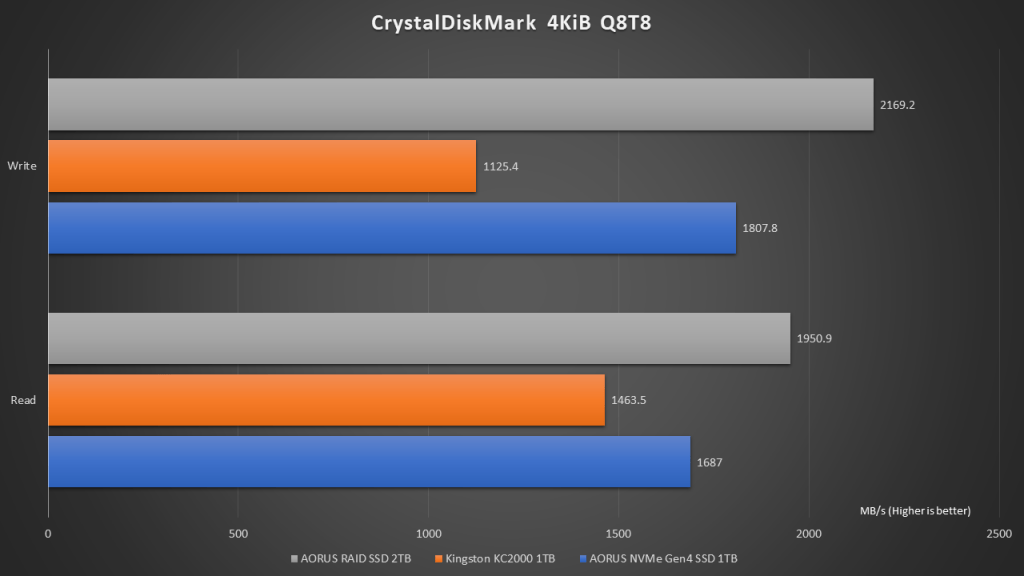 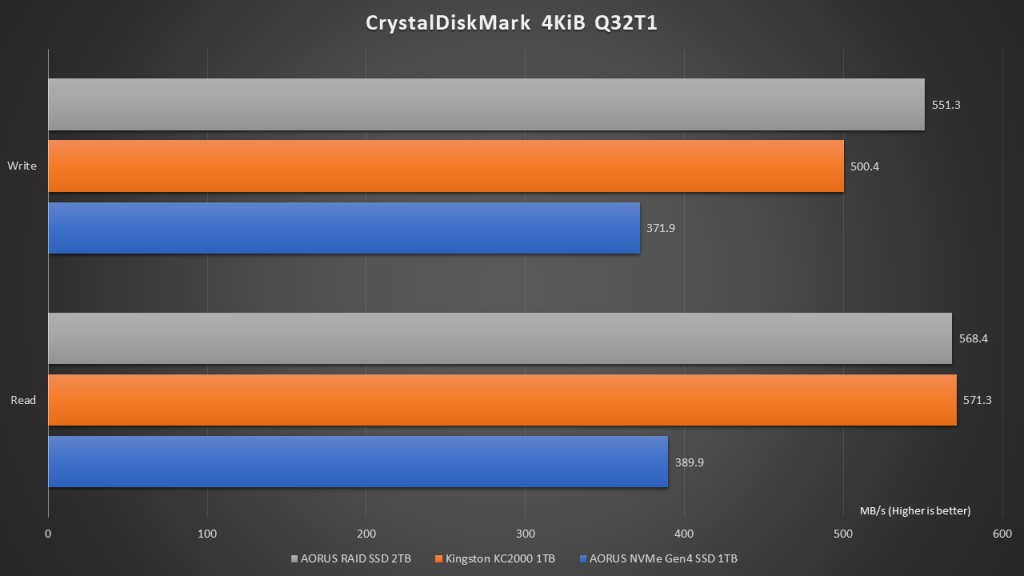 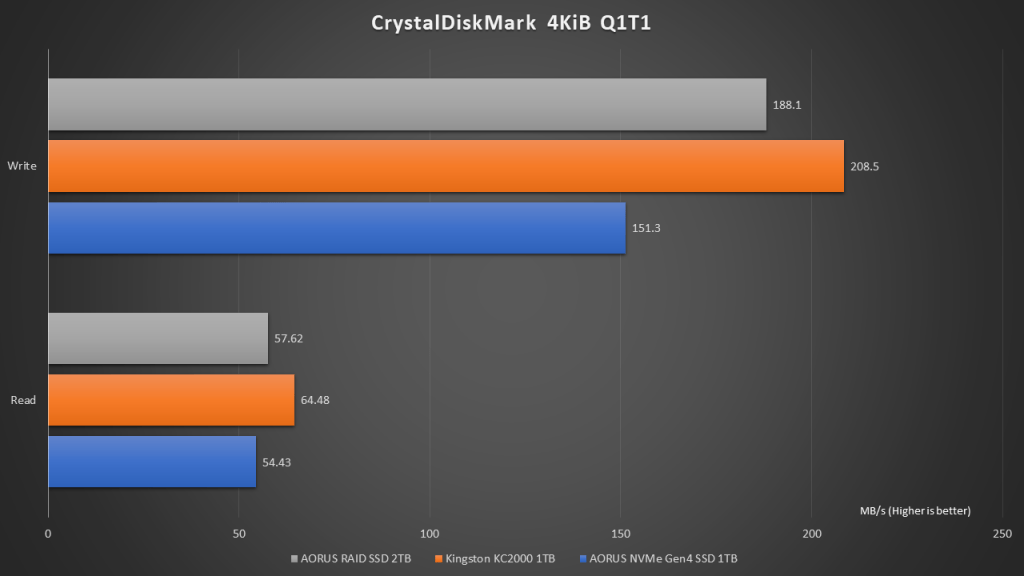 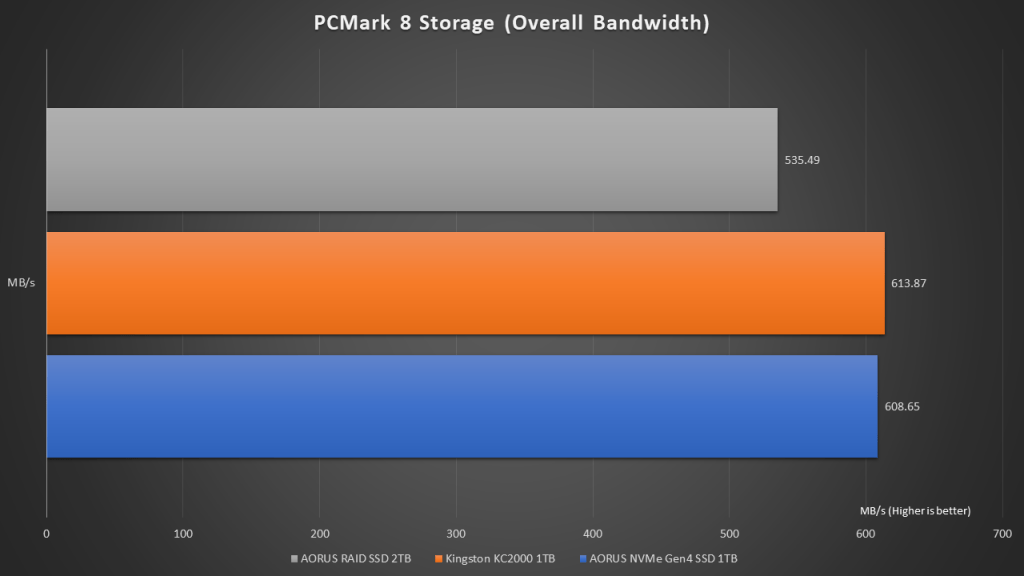 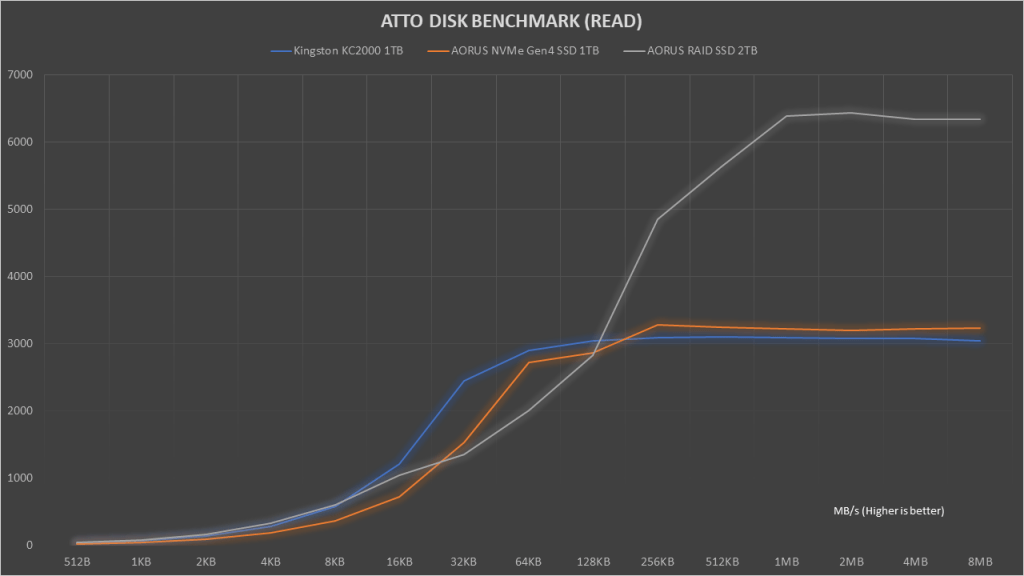 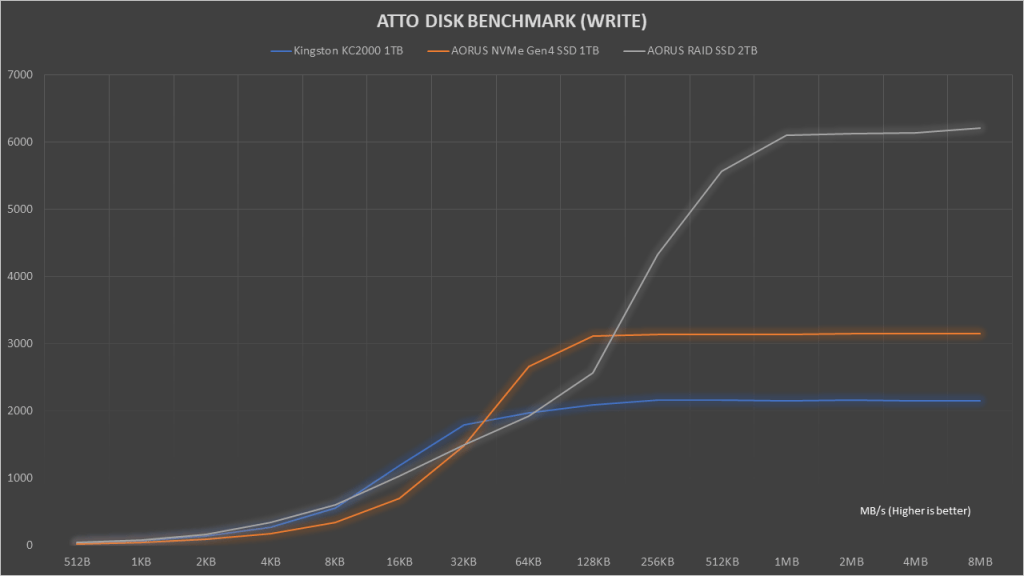 There is no doubt that the AORUS RAID SSD 2TB excels in raw performance. In fact, if just purely basing the maximum performance of the SSD, it is in fact more than two times faster than the a standard M.2 NVMe SSD. We also realised that the AORUS RAID SSD 2TB comes close to maximizing the its PCIe 3.0 x8 bandwidth of 7880MB/s. It’s not every day that we get to come across a SSD of such speed.

In the practical world, data transfer workloads are rarely sequential and of fixed size. Therefore, it could be impractical to determine performance of a SSD just simply based on its maximum throughput. If we looked at 4K Q1T1 data transfer tests with CrystalDiskMark, we can see that in fact, the AORUS RAID SSD 2TB performs slightly worse than the other two SSDs.

PC Mark 8 Storage benchmark which simulates real world workload also determines that the AORUS RAID SSD 2TB is the slowest out of the three. 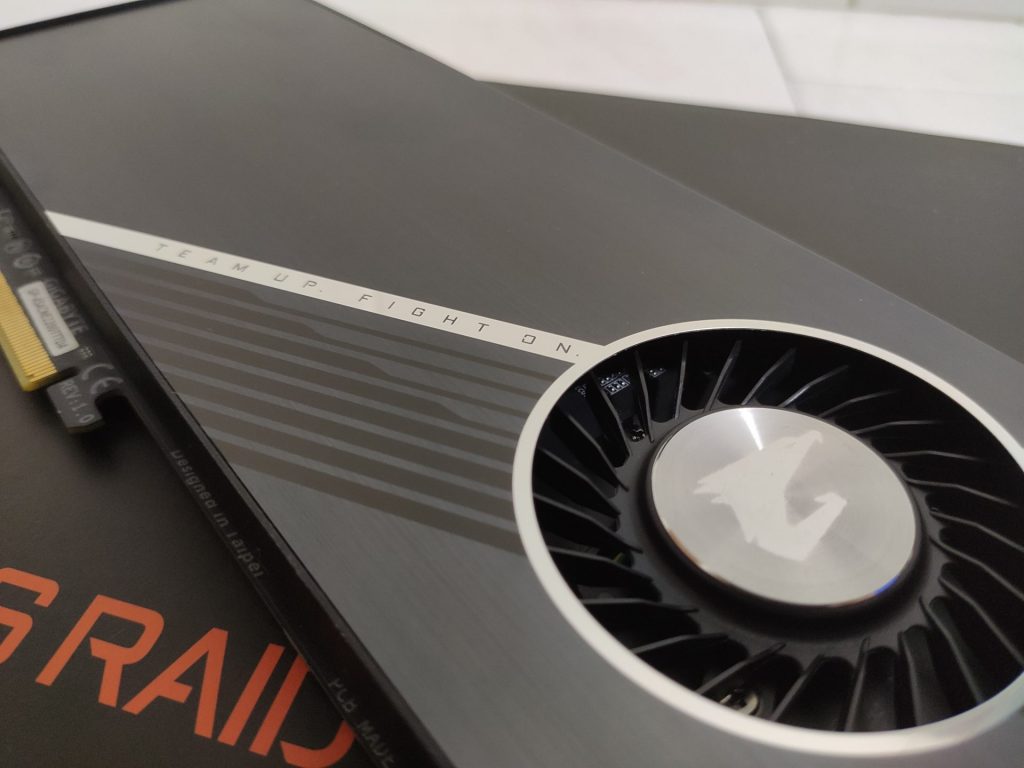 The AORUS RAID SSD 2TB has earned its bragging rights to be one of the fastest PCIe 3.0 based SSD in the market. With such high raw performance, users with the lack of M.2 NVMe slots can easily upgrade their system with this blazingly fast SSD.

However, based on our tests, the AORUS RAID SSD 2TB may not be the best when it comes to real world workloads. We’d rather spend the cash on a solid M.2 NVMe SSD such as those used as comparisons in this article. But don’t get me wrong. The AORUS RAID SSD 2TB is still a great choice if you are looking for a high performance SSD.

GitHub announces it is now free for teams