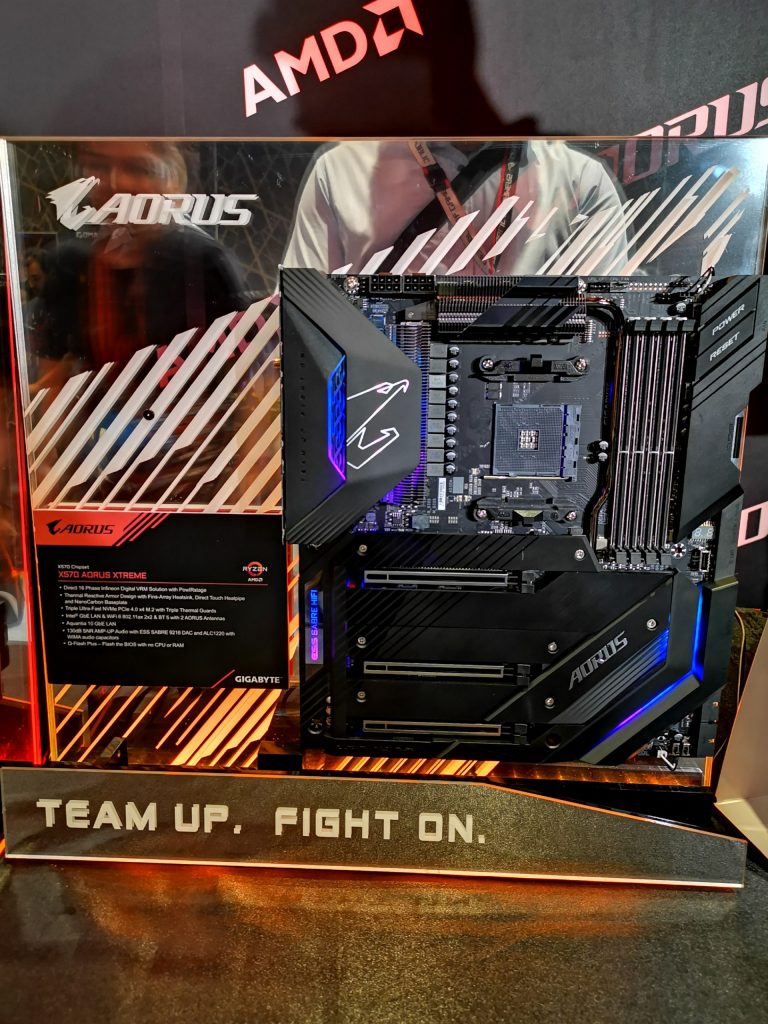 At the top of the line, the AORUS XTREME motherboard is equipped with the best of the best design and components. In fact, it is so well made that it is the only X570 motherboard in the market that does not come with a cooling fan on the X570 chipset. The whole motherboard is almost fully wrapped with a large metallic heatsink on both the front and the back to achieve optimal passive cooling capabilities.

This motherboard also comes with a Fins-Array Heatsink and Direct Touch Heatpipe design. While not shown, the back of the motherboard is also supported by a large NanoCarbon baseplate that will help the board in heat dissipation as well. The motherboard also features 3 x NVMe PCIe 4.0 x4 M.2 slots, Intel GbE LAN, WiFi 6, Aquantia 10GbE LAN and a ESS SABRE 9218 DAC. It’s probably one of the best, if not the best, X570 motherboard to look out for in the market. 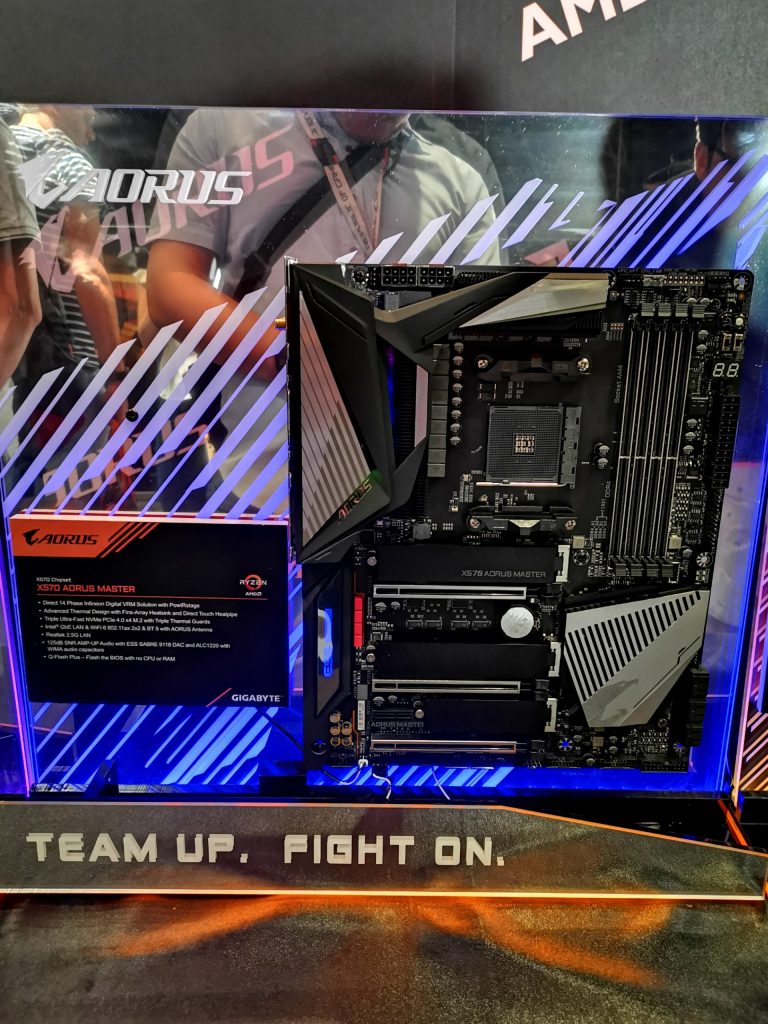 This motherboard still retains the essential connectivity and network options. It still has the same number of M.2 slots and similar network connectivity options. The MASTER has a 2.5G LAN from Realtek and uses a ESS SABRE 9118 DAC instead of the higher end options on the XTREME.  Both the XTREME and MASTER are similar in terms of specifications, but this time, instead of a full passive cooling design, the X570 chipset’s heatsink is also equipped with a small fan for more (cost) effective cooling.

If you compare between the design of the AORUS ULTRA and the AORUS MASTER motherboard, you probably wouldn’t find too much difference. The main difference is that the AORUS ULTRA does not have as many premium features as the MASTER. 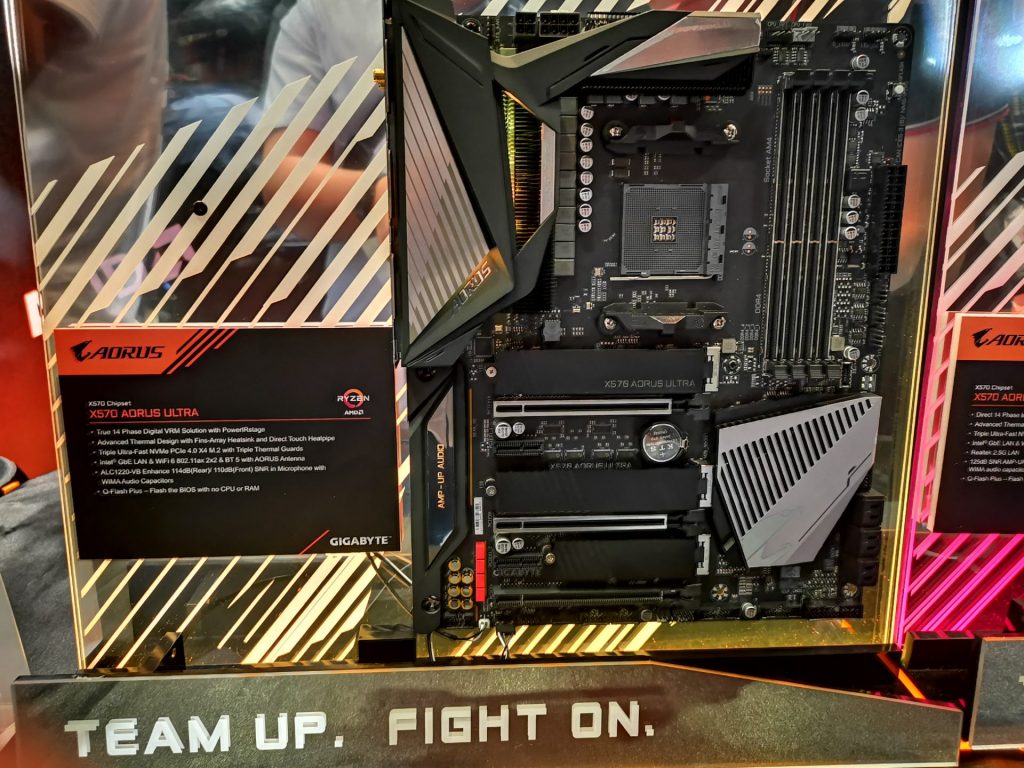 The X570 AORUS ULTRA comes with a true 14 Phase Digital VRM Solution. This differs from what is found on the AORUS XTREME and MASTER, which are “direct” phase designs. This could be also the reason why this motherboard only requires a 4+8 power plug, instead of 8+8.

Comparing between the AORUS ULTRA and MASTER, the ULTRA has the 2.5Gbit LAN and dedicated DAC features taken away. We also spotted that the ULTRA does not come with POST debug LED indicators or onboard power buttons. However, it does come with 1 more PCIe x1 slot than the MASTER.

Even though the AORUS PRO positioned as a lower tier model when compared to the AORUS ULTRA, it does not mean that GIGABYTE has skimped on its components. The AORUS PRO still comes with a 14 phase Digital VRM solution with PowerIRstage. With power taken care off, you can be assured that the highest end Ryzen 9 CPU can also be adequately supported on this motherboard. We can still expect that this motherboard to overclock well too. 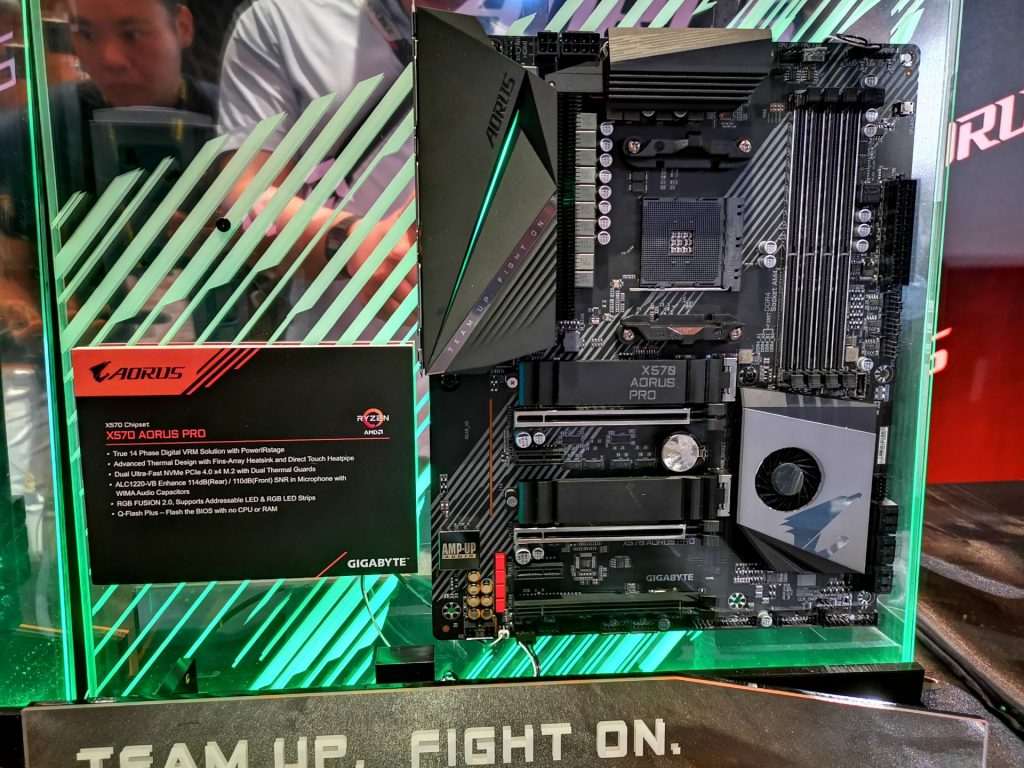 The main difference with the other models above, is that the AORUS PRO does not come with the premium features such having built-in WiFi, multi Gigabit ethernet, etc. It also only comes with 2 x NVMe PCIe 4.0 x4 slots instead of three. 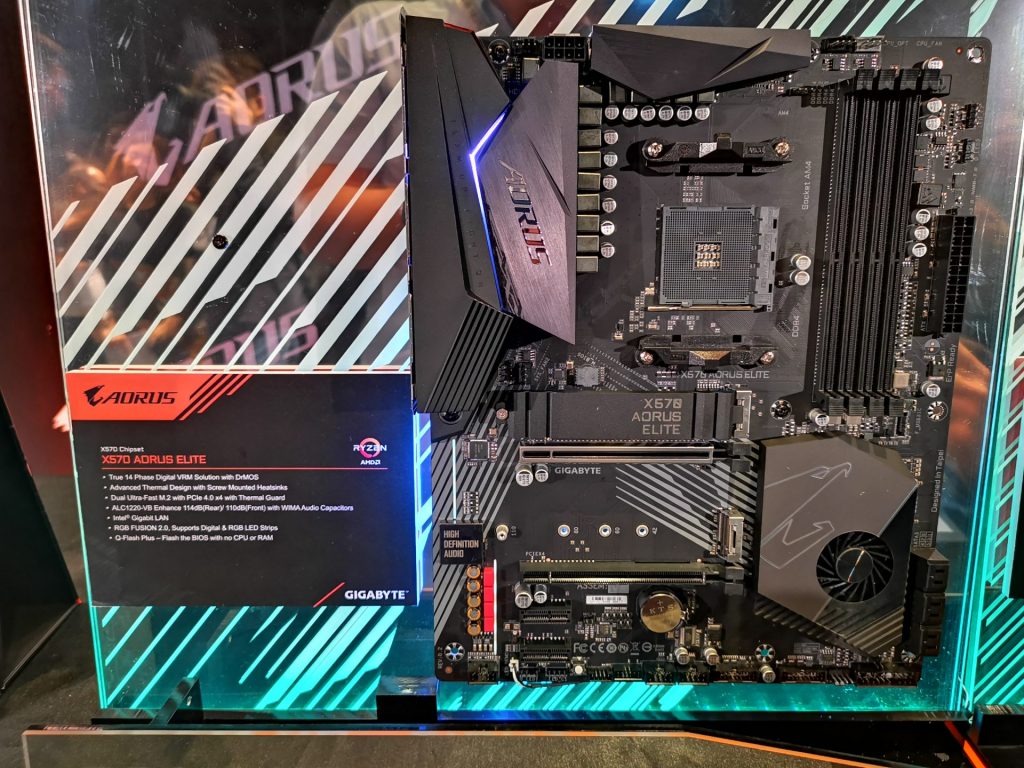 If you compare this to the AORUS PRO, you will realise that the AORUS ELITE uses less premium Digital VRM Solution.This will not affect too much to the performance of the motherboard if you aren’t trying to overclock the system.

This time, the 2nd M.2 slot also does not come with its own heatsink. 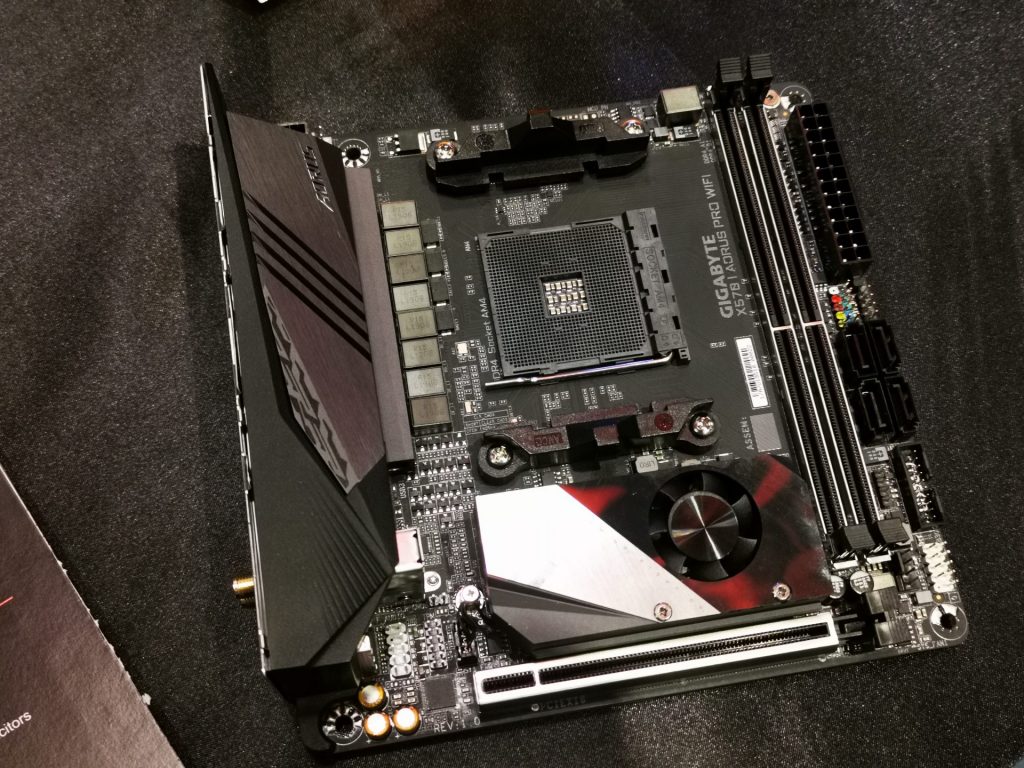 Unlike other brands which had to increase the size of the motherboard to fit more features, the I AORUS PRO WiFi motherboard still retains the standard Mini-ITX form factor. Even though this motherboard is small, it is extremely feature packed. It even comes with all the features that are only found on the more premium motherboards, such as WiFi 6 support.

The Gigabyte GAMING X does not fall under the AORUS family of product, but it will still be able to support any new Ryzen processors well. It’s a simple motherboard that has got all that is required for a decent Ryzen build. 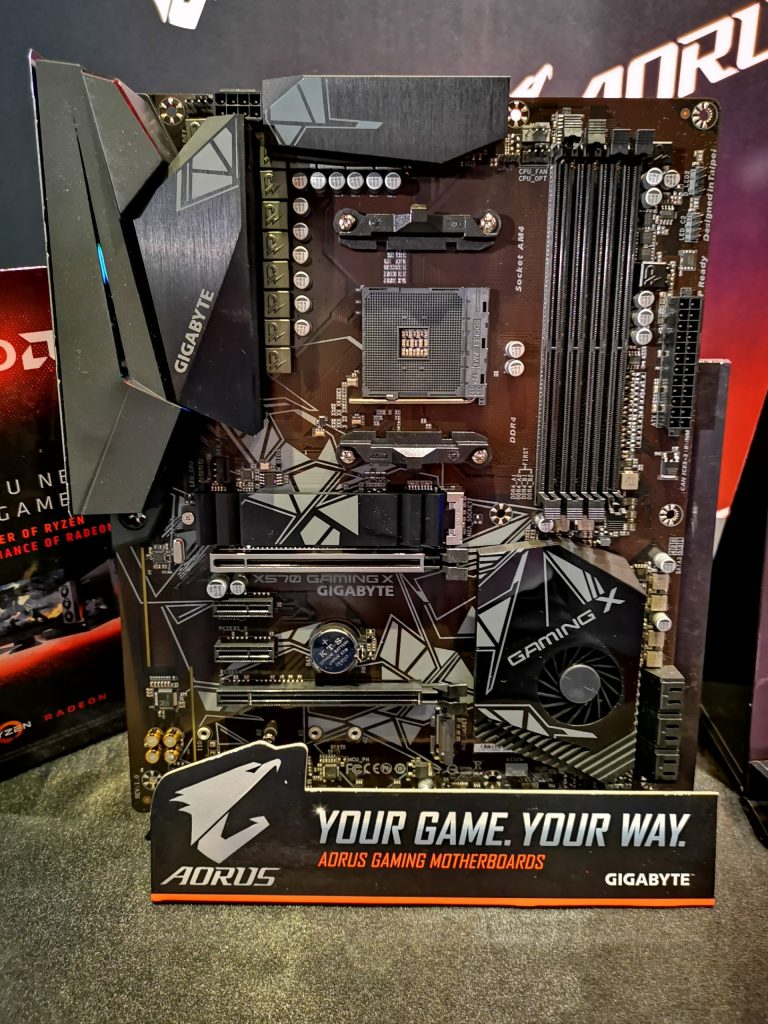 It has got all the basics there, and won’t be lacking in any fundamental features. Moreover, its the only motherboard from Gigabyte’s X570 series that still retains the PS2 ports. Perhaps, this could be one of it own unique factor.