In recent years, with the improvements in computing technologies and further research, there has been huge strides in the area of Artificial Intelligence. Gone were the days when Artificial Intelligence was largely conceptual and theoretical. Today, we can see practical AI applications almost everywhere in every industry. The advancement in AI is no doubt one of the largest contributions to our next generation of society.

However, with AI and computers having access to more data than ever, there has also been a rising concern on personal data privacy. Big companies have access to the large amount of personal data in their cloud services that provides such AI services. In addition, with data breaches seemingly prevalent in the world today, users of AI applications have more to worry about their own privacy and personal data.

To tackle these concerns, there has also been a push to edge computing from the traditional cloud computing model for AI applications. The high compute performance requirements for AI applications can be achieved with dedicated AI computing processors on devices. In smartphones today, there are application specific processors that only does AI computing tasks. One example includes the Huawei’s Neural Processing Unit (NPU) within their Kirin 980 chipset. Modern day computing chipsets even have direct support on Machine Learning libraries.

About the NVIDIA Jetson Nano

The only gap within the market today is in the space of IoT (Internet of Things). Microcontroller enabled development kits, or more advanced Single Board Computers, in the market today are simply not ready for AI applications due to the lack of the right hardware. NVIDIA’s Jetson branded products specifically target this gap in the market. With the launch of the new Jetson Nano Developer Kit earlier in March this year, developers can finally have a good enough system to test and deploy their AI enabled applications directly to the edge. All of these are possible without the need for any internet connection or reliance on the cloud.

When it comes to development, it is not just about the hardware, but also its software library support, development support and compatibility. The NVIDIA Jetson Nano is a compelling product that has an answer to all the concerns mentioned, and is thanks to NVIDIA’s experience in the area. Even though the product is considered relatively new, there is still a vast amount of support online. The Jetson Nano is geared as the starting point for the development of low power and low-cost AI applications on the edge.

In our upcoming articles, we will learn more about the NVIDIA Jetson Nano and its AI inference capabilities. The whole review will consist of 3 articles:

Here’s what the NVIDIA Jetson is made up of.

Getting started with the NVIDIA Jetson Nano is rather straightforward. You will be guided with instructions from the moment you open the box. Once the Jetson Nano is removed from the box, you will see the Quick Start guide which will give you instructions to an online video. This video will show you how to download and flash the MicroSD card with the latest Linux4Tegra Operating System (OS). This OS is actually a variant of Ubuntu 18.04 which is made compatible with NVIDIA’s hardware.

Within the box, there’s also a little cardboard fold that acts as a motherboard stand. Since the Jetson Nano does not come with any enclosure of sorts, you can place the stand back into the box and use the packaging as a test bench for your setup.

You may have realized that the whole NVIDIA Jetson Nano may seem to be like a complete Single Board Computer with all components integrated onto a single board. In fact, the actual Jetson Nano module only takes up a small real estate of the whole developer kit. By removing the main Jetson Nano module (which comes in a 260 pin SODIMM form) from the board, we can see how the peripheral board that we see only mainly provides I/O and power. The main magic for AI compute still comes from the Jetson Nano module. 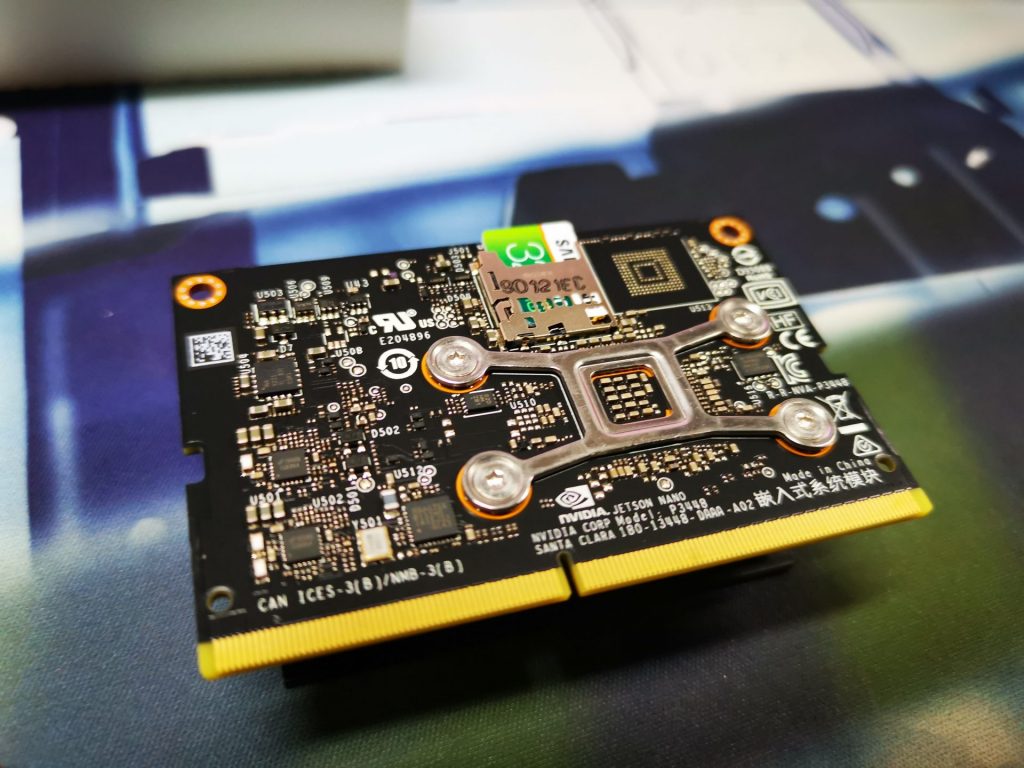 As we can see, the main Jetson Nano Module consists of the GPU, CPU and DRAM. The secondary MicroSD storage card slot is also found directly on this module. As of the heat will be produced from the CPU and GPU, the opposite side of this board is also attached with a heatsink to properly cool the whole unit while it performs.

The NVIDIA Jetson Nano has a very comprehensive set of I/O. Unlike simple Single Board Computers such as the Raspberry Pi 3, the Jetson Nano has a more advanced architecture which supports a much higher bandwidth. This give the engineers the ability to provide high speed interfaces such as USB 3.0, and Gigabit LAN ports, which is usually rare on other Single Board Computers.

While the board can look extremely powerful just from what its I/O provides, do take note that it may also require a 5V/4A Power Input via the DC Jack (instead of the MicroUSB port) when driving AI compute heavy applications. This may also be the case if you have many external peripherals attached to its power circuit (part of the 40-pin expansion header).

Do also take note that all external accessories are not included in the box. You will have to purchase your own power adapter and MicroSD card in order get the board working, and the box only contains the board itself.

In the next article, we will try out some of the demos that were included in our review kit to find out about the capabilities of the Jetson Nano. On top of that, we will also look at some performance numbers to see how the Jetson Nano competes with other similar products in the market.