SINGAPORE, 24 SEPTEMBER 2018 – The year 2018 marks the sixth year since Huawei launched the very first EMUI. The Android-based operating system has come a long way since then, and is now serving 350 million active users around the globe. The latest EMUI 9.0, first revealed during IFA 2018 at an exclusive media event, is based on the latest version of Google’s smartphone platform: Android P.

Developed to “Enable a Quality Life,” EMUI 9.0 is Huawei’s take on the Android P OS, and comes with a wealth of improvements both in the interface as well as under the hood. Today, we take a look at five of them.

In UI design, simplicity and consistency are said to be the most important guiding principles to creating quality user experiences.

In terms of simplicity, Huawei has revisited the Settings menu and consolidated a lot of the more granular settings. Approximately 10 percent of the items have either been removed, or stowed away in an “Advanced” tab. This is because while some users prefer having granular control over their devices, there are also users who prefer to keep things clean, simple and accessible. By moving the more technical settings to a separate tab, Huawei satisfies people from both camps.

Beyond the Setting menu, Huawei also revised the arrangement of general UI elements. In EMUI 9.0, the essential visual elements are moved to reduce the stress on user’s eyes. A handful of buttons have also been moved to the lower half of the screen, providing easy access for users who prefer one-handed operations.

Nature is brimming with vibrant, ever-changing colors. Inspired by nature, EMUI 9.0 utilizes Huawei’s Smart Color Picker technology to create a more cohesive, pleasing-to-the-eye interface. Numerous graphics have been re-created with nature motifs, such as the default profile picture. Auto color picker also improves the contrast and vibrancy of the UI as well as the readability of text, creating a thoroughly immersive, natural experience.

Screenshots of illustrations taken on a device running EMUI 9.0

After sights, there are sounds. EMUI 9.0 incorporates sounds of nature in its alarm ringtones. From the sounds of water flowing to the songs of birds chirping, the natural sounds provide a soothing audio experience to users in the comfort of their home, or wherever they may be.

Huawei’s EMUI 9.0 will include digital wellbeing features that help users better track and manage the time spent on their smartphone. Individual apps are tracked and show users how much time they’re spending on each daily. To help reduce children’s screen time, parents have the option of setting usage limits for specific applications. There is also an option for customizing how the screen gets greyed out to help users wind down and get ready for bed time. 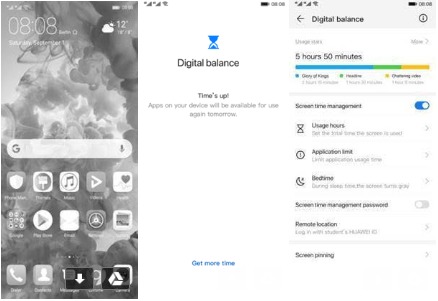 The new EMUI 9.0 is great for gamers as it will include GPU Turbo 2.0, the second generation of Huawei’s graphics processing acceleration technology. The new algorithms reduce touch response delay by up to 36 percent. An App Assistant also helps users cut down on the interruptions that may impact their gaming sessions. The best part? GPU Turbo 2.0 supports more games than ever, enabling even more gamers to experience a fuller gaming experience.

EMUI 9.0 features Password Vault, which lets users store their passwords locally and securely. All the data is encrypted and never leaves the device, so users can take advantage of the auto-fill features with peace of mind.

EMUI 9.0 will be available in Singapore on HUAWEI P20 Series and HUAWEI Mate 10 Series after the HUAWEI Mate 20 Series is launched on 16 October 2018.

Huawei’s products and services are available in more than 170 countries, and are used by a third of the world’s population. Sixteen R&D centers have been set up in the United States, Germany, Sweden, Russia, India and China. Huawei Consumer BG is one of Huawei’s three business units and covers smartphones, PC and tablets, wearables and cloud services, etc. Huawei’s global network is built on almost 30 years of expertise in the telecom industry and is dedicated to delivering the latest technological advances to consumers around the world.