Home » SPOILER ALERT! THE FUTURE IS…

This glimpse of the future was crafted by: Alecs Chong 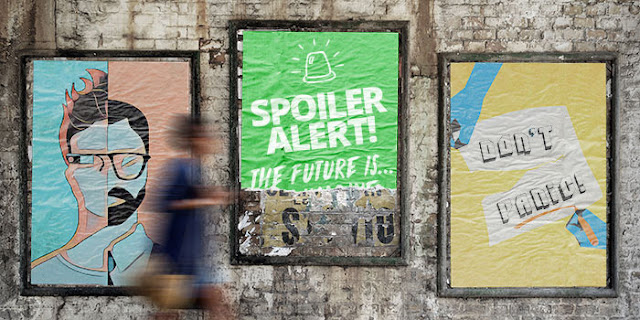 Spoilers are everywhere.
Remember that season’s finale episode that you’ve been planning to watch once
you get home from work? Spoiled. Or that insanely good plot twist that was
supposed to blow your mind? Yup, spoiled too. It doesn’t matter where you are
or what time zone you are in. Chances are, someone from across the globe will
not be able to contain their excitement and will drop the bomb on social media
before that mind-blowing plot twist even had the chance to ‘surprise’ you first
hand. It sucks, right?

That,
however, is for fictional stories. In real life, not knowing what will happen
in the future is excruciating, nerve-wracking and far scarier. When you’re on
the other end of the line, waiting for the final verdict, you’d wish you could
have seen what was coming, or that someone could’ve spoiled it and relieved you
from anxiety, especially when there is just too much to lose. In real life, spoilers can be our life savers.
20
years ago, researchers attempted to simulate micro physical interaction between
aggregates and mortar (concrete). People criticised this, saying it wasn’t
practical – it took weeks to complete even the tiniest of numerical analysis.
20 years later, this criticism is no longer valid. It can be done with ease
using current computing power, not to mention harnessing the advancement of
quantum computing.
If
we can now easily predict the trajectory of cracking in concrete in the
micro-scale, we might well be heading to a place where something as random as
predicting what number a dice might land on to a higher degree of accuracy
using the laws of physics, if we are given the right data. It is not impossible
to see that we are well on our way to predicting many things in the not too
distant future.
20 billion prediction devices

With
more than 20 billion devices expected to be connected to the Internet of Things
(IoT) in
the next five years, predicting the future does not seem so
far-fetched anymore. As more people share their information online, computers
will be able to analyse the changes in trends and behaviours over time and
calculate the probabilities with higher accuracy. In fact, several data-rich
practices such as modelling, algorithms, predictive and computational analytics
have already caught the attention of businesses, offering them the “alluring
promise of precision and predictability” ‒ and they are taking the bait!
“Everywhere
we look, companies are putting data to use ‒ driving market share, reducing
costs, raising productivity, and improving products and services,” says consultancy
company McKinsey. And this is not even a surprise. Digital
disruption has shaken up businesses and organisations like a hurricane, and has
them always on their toes, worriedly thinking “when will the next one hit?” or
worse, “are we next?” To save themselves from potential doom, they are all
trying to get ahead of the game and are on a mission to predict the future
before the next disruption comes and gets them.
But
what will happen then when the element of surprise becomes a forgotten concept
or when spoilers will stop being a thing? If we’re already certain and sure of
everything that’s about to come, we’d be missing the chance of experiencing
something extraordinary.
Ironically,
in our desire to get ahead and achieve a ‘perfect’ world where we can have the
ability to know everything, we will be risking having a world that is only
average. And is that what we want? To be only average?
The pursuit of
self-actualisation

Humans,
by nature, want to be fulfilled ‒ to have a life filled with meaning. Abraham
Maslow’s hierarchy of needs suggests
that our need for self-esteem and self-actualisation are strong drivers and
motivators of behaviour; therefore, being average just won’t be as satisfying
for many people. Those who are born achievers will most likely seek to be
better than the rest, and be, as Charles Darwin’s self-selection theory
suggests, the alpha male or female, or the leader of the pack.
“The
most talented, thought-provoking, game-changing people are never ‘normal’. They
usually overcome great obstacles, take surprising routes to their goals, are
often dysfunctional and under no circumstances do what people expect them to
do,” says
Virgin Group founder Richard Branson. So, even if we strive for
predictability, our desire to be fulfilled and self-actualised will go against
‘norms’ and expectations, and seek out the unpredictable and unconventional.
Because for us, a
predictable and average world is an unfulfilling world, and nobody wants to
succumb to that.
Is predictability the enemy of
innovation?

In
1958, the United States established the Defense Advanced Research Projects
Agency (DARPA) after the unexpected success of Russia’s launch of Sputnik. It
had one ostensible
mission: “to prevent technological surprises to the US military and
to create surprises of its own.”
Of
course, everyone in the defence industry and even non-defence organisations
will agree. Getting ahead of disruption
and fostering creativity and innovation are keys to win a war, whether in business or in the battlefield;
but this task is not as easy as it looks. As we look ahead into the future by
relying on real-time data and analytics alone, we might be blinding ourselves
from other possibilities and be limited by the things that data tells us,
stopping us to explore further and imagine the unknown.
According
to a Harvard
Business Review article, exploring the power and potential of big
data is inherent in innovating for the future, but we should not ignore the
element of surprise. “With all of this information at our disposal, we risk
robbing brands of opportunities for serendipity — the delightful surprises that
happen when we least expect them, attracting the attention of consumers,” it
says.
Perhaps, the key in navigating towards the future is finding a
balance between certainty and uncertainty, looking ahead to prevent us from harm while still allowing ourselves to
grow and be surprised.
Predictions with a purpose
The
age of big data is here and there’s nothing to stop businesses from unlocking
its potential, and using it to try to predict the future. It’s inevitable. But
predictability, like innovation, should not be done just for the sake of, or
just because we have the technology to do it. It should have a higher purpose,
something that will breed new sustainable opportunities for future generations
and not bring humanity to extinction.
As Nicholas Carr asks: Where does the
algorithm end and the self begin? If and when predictive technology will be
able to tell the future accurately, real creative innovators would know that
recognising the next disruption would not be enough. We have to act upon it,
and fast before someone else gets the idea and beats us to it. Just ask Kodak
and Nokia.
In
the end, it’s not whether we saw it coming or not, or whether we were the one
who called it before anybody else. When the time comes that the prediction
comes true, it’s the way we will react to change that will matter.
After
all, predictability is not the
innovation destination. It’s not the
ultimate goal. It’s a continuous unending journey of looking forward and
finding the unknown ‒ close enough to warn us of danger but far enough to keep
us excited, motivated and on our toes.
Do you want to know everything
that lies ahead? No spoilers please!
Aurecon’s award-winning
blog, Just Imagine
provides a glimpse into the
future for curious readers, exploring ideas that are probable, possible and for
the imagination. This post originally appeared on Aurecon’s Just Imagine blog. Get access to the latest blog posts as soon as
they are published by subscribing to the blog.