Home » More than 2.5 billion records stolen or compromised in 2017

Singapore – April 10th 2018 — Gemalto (Euronext NL0000400653 GTO), the world leader in digital security, today released the latest findings of the Breach Level Index, revealing that 2.6 billion records were stolen, lost or exposed worldwide in 2017, an 88% increase from 2016. While data breach incidents decreased by 11%, 2017 was the first year publicly disclosed breaches surpassed more than two billion compromised data records since the Breach Level Index began tracking data breaches in 2013.
To learn more about the 2017 statistics and trends, register for the upcoming webinar “New Data Breach Findings: The Year of Internal Threats and Misplaced data”
Over the past five years, nearly 10 billion records have been lost, stolen or exposed, with an average of five million records compromised every day. Of the 1,765 data breach incidents in 2017, identity theft represented the leading type of data breach, accounting for 69% of all data breaches. Malicious outsiders remained the number one cybersecurity threat last year at 72% of all breach incidents.  Companies in the healthcare, financial services and retail sectors were the primary targets for breaches last year. However, government and educational institutions were not immune to cyber risks in 2017, making up 22% of all breaches. 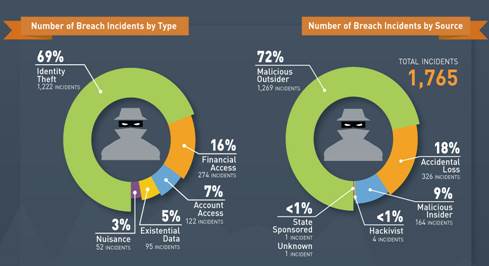 The Breach Level Index* serves as a global database that tracks and analyzes data breaches, the type of data compromised and how it was accessed, lost or stolen. Based on data breach reports collected in the Breach Level Index, the major 2017 highlights include:
“The manipulation of data or data integrity attacks pose an arguably more unknown threat for organizations to combat than simple data theft, as it can allow hackers to alter anything from sales numbers to intellectual property. By nature, data integrity breaches are often difficult to identify and in many cases, where this type of attack has occurred, we have yet to see the real impact,” said Jason Hart, Vice President and Chief Technology Officer for Data Protection at Gemalto. In the event that the confidentiality, or privacy, of the data is breached, an organization must have controls, such as encryption, key management and user access management, in place to ensure that integrity of the data isn’t tampered with and it can still be trusted. Regardless of any concerns around manipulation, these controls would protect the data in situ and render it useless the moment it’s stolen.”
Data Breaches by Type
Identity theft was the leading type of data breach, accounting for 69% of all incidents constituting 26% of breached data in 2017. The second most prevalent type of breach was access to financial data (16%). The number of lost, stolen or compromised records increased the most for nuisance type of data breaches (560%) which constituted 61% of all compromised data. Account access and existential type breaches decreased both in incidents and records from 2016.
Data Breaches by Industry
In 2017, the industries that experienced the largest number of data breach incidents were healthcare (27%), financial services (12%), education (11%) and government (11%). In terms of the amount of records lost, stolen or compromised, the most targeted sectors were government (18%), financial services (9.1%) and technology (16%).
Data Breaches by Source
Malicious outsiders were the leading source of data breaches, accounting for 72% of breaches, however making up only 23% of all compromised data. While accidental loss was the cause of 18% of data breaches, it accounted for 76% of all compromised records, an increase of 580% from 2016. Malicious insider breaches were 9% of the total number of incidents, however this breach source experienced a dramatic increase (117%) in the number of compromised or stolen records from 2016.
“Companies can mitigate the risks surrounding a breach through a ‘security by design’ approach, building in security protocols and architecture at the beginning,” said Jason Hart, Vice President and Chief Technology Officer for Data Protection at Gemalto. “This will be especially important, considering in 2018 new government regulations like Europe’s General Data Protection Regulation (GDPR) and the Australian Privacy Act (APA) go into effect. These regulations require companies to adapt a new mindset towards security, protecting not only their sensitive data but the privacy of the customer data they store or manage.”
*The Breach Level Index is a global database that tracks data breaches and measures their severity based on multiple dimensions, including the number of records compromised, the type of data, the source of the breach, how the data was used, and whether or not the data was encrypted. By assigning a severity score to each breach, the Breach Level Index provides a comparative list of breaches, distinguishing data breaches that are a not serious versus those that are truly impactful (scores run 1-10).
Breach Level Index Resources:
++++
About Gemalto
Gemalto (Euronext NL0000400653 GTO) is the global leader in digital security, with 2016 annual revenues of €3.1 billion and customers in over 180 countries. We bring trust to an increasingly connected world.
From secure software to biometrics and encryption, our technologies and services enable businesses and governments to authenticate identities and protect data so they stay safe and enable services in personal devices, connected objects, the cloud and in between.
Gemalto’s solutions are at the heart of modern life, from payment to enterprise security and the internet of things. We authenticate people, transactions and objects, encrypt data and create value for software – enabling our clients to deliver secure digital services for billions of individuals and things.
Our 15,000+ employees operate out of 112 offices, 43 personalization and data centers, and 30 research and software development centers located in 48 countries.
For more information visit www.gemalto.com, or follow @gemalto on Twitter.

Promo Alert: MasterKeys Pro by Cooler Master is on Promotion