Rare’s Sea of Thieves Closed Beta came and went 2 months back, and most of those who managed to get their hands on it had a great time. Things were largely stable, with the game running surprisingly smooth for a game that is not yet released. However, due to the majority of the game’s content being largely blocked off for the main release of the game, many were skeptical with its replayability. Now that the game is out, let us find out if there is enough hiding under Rare’s sleeves. When it comes to changes, it is usually the fine tuning that keeps the experience fluid. The official release comes with better performance in general, even in humongous islands. Everything, especially the water, looks amazing and surreal. 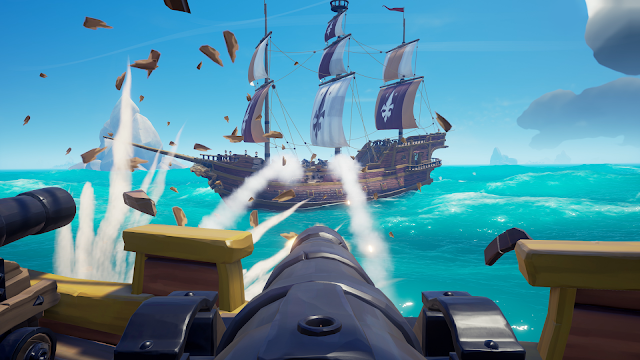 Questing in the Sea of Thieves is now more diverse. There are now 2 additional factions in the game – Order of Souls and Merchant Alliance. Instead of just hunting for treasures, players can now go for a more action-packed skeleton hunting quest from the Order of Souls. If something calming like chasing little piggies are more of your style, you can approach the Merchant Alliance. However, playing it for several hours straight can cause to the quests start becoming noticeably similar to one another. This can affect the replayability of the game, and hopefully Rare is able to add more content to lengthen the lifespan of it. 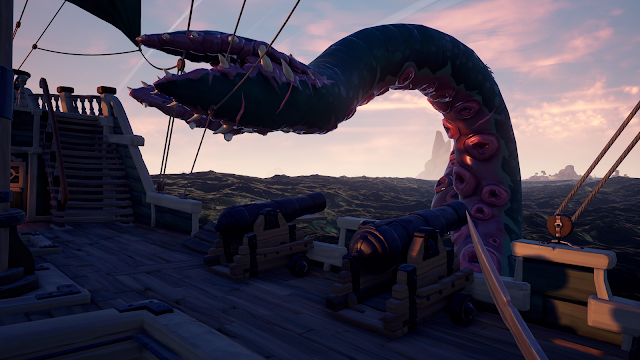 In your journey, you will also encounter a few new creatures. The more distinct one is the Kraken, lord of the deep, that threatens to take out your entire ship. On land new dangers awaits, with new skeleton bosses and even snakes that are able to poison you.

With the launch comes newer customization options that players are dying for. The ones shown above are now able to be bought from the shop, but at an exorbitant price. One thing to note is the lack of upgradability to the ship. One would hope that Rare adds the ability to improve the speed and health of the ship, and even damage of the cannons.
Your pirate avatar is also able to be changed with an array of different hairstyles and outfits. Not only that, there are now newer and booty-ful weapons that you pirates can wield.

With all things said and done, Sea of Thieves is as fun as it was in the previous beta. Newer content was added, but it may not be enough for some. The lack of end-game content, apart for the Pirate Legend shenanigans, can be a disappointment. The lack of matchmaking for solo players can deter some of the gaming audience. Hopefully the upcoming content update at mid-2018 will be able to satisfy those who have gotten the game.
For the LATEST tech updates,
FOLLOW us on our Twitter
LIKE us on our FaceBook
SUBSCRIBE to us on our YouTube Channel!