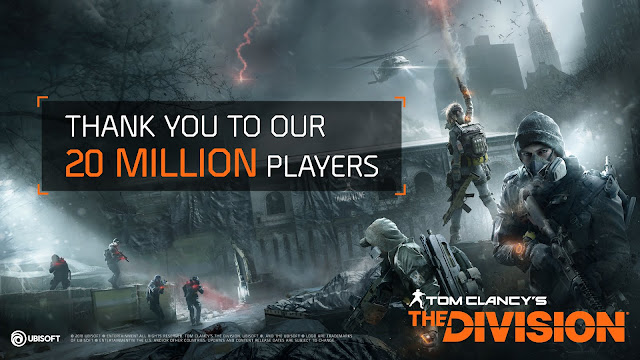 Singapore — March 2, 2018 — Today, Ubisoft marks the second anniversary of Tom Clancy’s The Division by reaching a milestone of 20 million players worldwide. Since being introduced to the world of Tom Clancy’s The Division, set in New York City during the break out of a global pandemic known as “The Dollar Bill Flu”, players continue to experience new features including the Underground, Survival and Last Stand Expansions.
As a thank you for players’ continuous support of the game, Ubisoft has a month of in-game activities planned, including four Global Events from March 1st until March 29th with one global event per week. Global Events are a live feature in Tom Clancy’s the Division that alter the game experience by adding modifiers to all in-game activities while granting participating players a chance for special cosmetic and gameplay rewards. 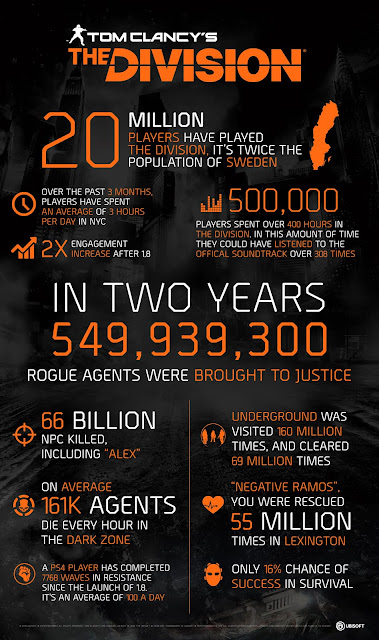 Before its launch, Tom Clancy’s The Division broke the record with the largest Beta phases for a new franchise (6.4 million players). At launch, Tom Clancy’s the Division became the fastest-selling new franchise within the gaming industry. Since its launch, the teams released three expansions and nine significant updates that included new gameplay modes, Dark Zone map expansions, new incursions, gameplay rebalancing and quality of life improvements along with a wealth of customization options and live activities. Most recently, Massive studio released Update 1.8 – Resistance in December 2017, which signified a new step forward into making the current version of the game, the best it has even been. Update 1.8 was the biggest free content update so far, doubling player engagement and generating positive feedback amongst the player community. “We are very proud of what we have achieved during these past 2 years. Listening and giving back to the community has always been our first objective and we would like to thank all The Division players for their valuable feedback and their support,” said Julian Gerighty, Creative Director. Today, Tom Clancy’s The Division contains a number of different modes, including multiple PvE activities, two PvP game modes, a heart pumping survival mode, continuous live activities like Global Events and Double Reward Weekends, and much more. All of this, plus Massive team’s dedication to listening to players illustrates perfectly Ubisoft’s commitment and engagement to offer them the most unique experiences.
Please follow us on Facebook at facebook.com/UbisoftSEA and on YouTube at youtube.com/UbisoftSEA for more Ubisoft excitements and updates.
About Tom Clancy’s The Division
Tom Clancy’s The Division takes place weeks after a devastating pandemic sweeps through New York City on Black Friday. One by one, basic services fail and in only days, without food or water, society collapses into chaos. The Division, an autonomous unit of tactical agents leading seemingly ordinary lives among us, is activated to save society. In this immersive online open world action RPG, discover a hostile and dynamic environment where exploration and player progression are essential. Team up with other players to investigate the sources of the virus and reclaim the city from the overwhelming turmoil. For more information about Tom Clancy’s The Division, please visit http://www.thedivisiongame.com.
ABOUT UBISOFT
Ubisoft is a leading creator, publisher and distributor of interactive entertainment and services, with a rich portfolio of world-renowned brands, including Assassin’s Creed, Just Dance, Tom Clancy’s video game series, Rayman, Far Cry and Watch Dogs. The teams throughout Ubisoft’s worldwide network of studios and business offices are committed to delivering original and memorable gaming experiences across all popular platforms, including consoles, mobile phones, tablets and PCs. For the 2016-17 fiscal year Ubisoft generated sales of €1,460 million. To learn more, please visit www.ubisoft.com.
© 2017 Ubisoft Entertainment. All Rights Reserved. Tom Clancy’s, The Division logo, the Soldier Icon, Ubisoft, and the Ubisoft logo are trademarks of Ubisoft Entertainment in the US and/or other countries

PS4 Exclusive - Detroit: Become Human will be released on 25th May 2018