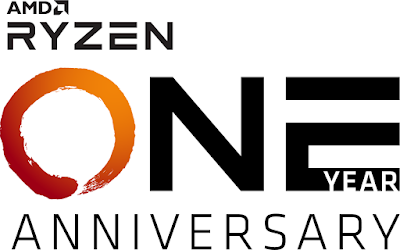 March 2nd marks the
one-year anniversary of AMD’s launch of Ryzen, which brought excitement and
innovation back to the high-performance PC market in 2017 for our partners,
customers, and end users.
In the past 12 months,
AMD has launched 20+ Ryzen processors into nearly all parts of the premium PC
market, delivering disruptive performance at every price point. AMD started
with the Ryzen CPU line for desktops, followed by the souped-up super Ryzen – Threadripper.
Then came Ryzen PRO, Ryzen Mobile, and Ryzen desktop APUs.
All are the fruits of
a multi-year strategy to redesign the processor for higher performance
computing under CEO Lisa Su, and it’s paying off. Ryzen achieved an unheard of
52% IPC improvement, the most stunning increase in generational performance in
the company’s history. Top OEMs took notice, with some very exciting
Ryzen-powered systems currently in the market, and more to come. To top it off,
AMD’s fourth quarter and full year results for 2017 were the best its posted in
years.
Below are just some of
last year’s highlights:
·
March: Launched Ryzen desktop processors into the
market with Ryzen 7, bringing innovation and excitement back to the industry
·
April: Launched Ryzen 5 desktop processors,
introducing disruptive levels of compute performance at a variety of price
points
·
June: Announced the Ryzen PRO desktop processors
lineup designed to meet the demands of today’s compute-intensive workplaces with
commercial grade features
·
July: Completed the Ryzen desktop processors
lineup with the release of Ryzen 3 targeting the mainstream desktop
market
·
August: Surprised everyone with the announcement of
the highest-performance desktop processor ever, with Ryzen Threadripper
·
October: Introduced Ryzen Mobile processors with
Radeon Vega Graphics, featuring the world’s fastest processor for ultrathin
notebook, powering Acer Swift 3, HP Envy X360, and Lenovo IdeaPad
720S notebooks
·
February: Launched Ryzen Desktop APUs, combining
high-performance Radeon Vega Architecture with Zen CPU cores on a single chip
for discrete graphics gaming performance in an APU
And AMD is not slowing
down. AMD has a strong long-term Client roadmap that builds on the innovation they’ve delivered with “Zen” for years to come, and will reinforce their position
as the driving force of innovation in high performance computing.
As announced at CES,
the 2nd generation of Ryzen CPUs, with AMD’s first 12nm
processor based on our “Zen+” architecture, is coming in April. Ryzen PRO
Mobile, designed for high-performance, premium commercial notebooks, is coming
in Q2. And 2nd generation Ryzen Threadripper, building on the
innovation delivered with the previous generation, is slated for 2H.