Mobile robotics: thinking in terms of fleet productivity is key to success

Home » Mobile robotics: thinking in terms of fleet productivity is key to success

Mobile
robotics: thinking in terms of fleet productivity is key to success
Autonomous
mobile robots are causing a paradigm shift in the way we envisage commercial
and industrial vehicles. In traditional thinking bigger is often better. This
is because bigger vehicles are faster and are thus more productive. This
thinking holds true so long as each vehicle requires a human driver. The rise
of autonomous mobility is however upending this long-established notion: fleets
of small slow robots will replace or complement large fast manned
vehicles.
In this
article, we will explore the basis and the future implications of this major
transition. We will focus on two applications in particular: agriculture and
last mile delivery. For both, we will demonstrate how autonomous
mobile robots have already begun this transformation.
In this
article we draw from two of our recent studies: Agricultural Robots and Drones
2017-2027: Technologies, Markets, Players;
andMobile Robots and Drones in
Material Handling and Logistics 2017-2037. These
detailed reports offer a comprehensive technology and market assessment,
considering how robots and drones are penetrating into agriculture,
logistics and material handling.
Last mile delivery vehicles: now and the future
Last
mile delivery remains an expensive affair, often representing more than half of
the total delivery cost. This is because it is inherently a
low productivity process: small parcels must be delivered to custom
destinations. This is in stark contrast to long haulage in which large
loads are transported along fixed routes.
The
current modes of last mile delivery all involve humans: a driver may drive a
van along local routes, dropping parcels door by door; a person on a motorbike
or cycle may carry one or few items to limited destinations per run; or both.
These modes work and may be fast, but remain expensive despite
employing many new business models and route-optimization algorithms.
Change
is however underway, and we can already see the silhouette of the medium-term
future: unmanned autonomous robots carrying small loads to pre-determined
destinations. These robots may at first seem like strange creatures:
they are smaller and slower than current modes of last mile delivery and can
carry fewer items per trip, certainly making them less productive and thus less
cost effective. 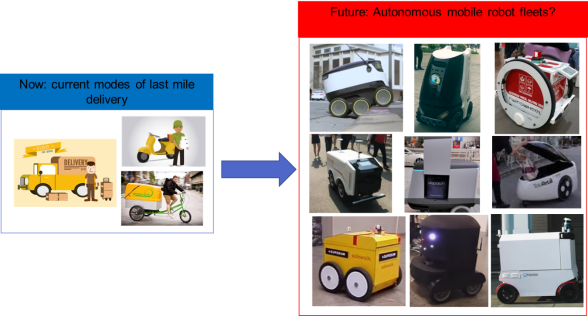 Fleets
of autonomous last mile delivery robots have the potential to ultimately boost
the productivity in last mile delivery, thus reducing costs.  Sources for
robots: first row: Starship Technologies, Alibaba,
and TwinWheel; second row: DJ, Dispatch, and Teleretail; and third
row: SideWak,, Marathon Technologies, and Marble
However,
this is old thinking in which productivity is compared on a per unit
basis. This is because autonomous mobility lends itself to fleet operation. In
this model, one remote operator may monitor and control the work of many
delivery robots. In this case, the wage and overhead of the person is spread
over many robots. In essence, the fleet will magnify the productivity of the
operator.Consequently, productivity must be compared at level of the fleet.
In our
report Mobile Robots and Drones in
Material Handling and Logistics 2017-2037, we
have built a model looking at the cost competitiveness of last mile delivery
robots. We estimate the operator-to-fleet-size ratio at which
mobile robots become more competitive than a man on a bike. This threshold
is difficult to achieve given the current retail prices for early adopters of
this robottechnology.
Our
roadmap suggests that this threshold become very achievable in the
near future. This is because these mobile robots currently travel at low speeds
along well-structured and uncrowded routes performing short delivery runs.
In the future, as these robots learn more, they will become better adapt at
navigating more complex environments at higher speeds with less
supervision, thus boosting the productivity of individual units.
Furthermore, we expect
the cost to fall dramatically in the near term. These robots do not
require complex hardware. In fact, they are not too dissimilar to an electric
scooter integrated with a mobile phone. Indeed, we expect the hardware platform
to become commoditized in the future, and the primary value to shift towards
fleet management and delivery services. This explains why some in this business
are already self-positioning as providers of robots-as-a-service (RaaS).
The
forecasts in our report Mobile Robots and Drones in
Material Handling and Logistics 2017-2037 suggest
that the sales of ground-based last mile delivery
robots will be modest until 2021-23. In
this early phase the industry is essentially in learning
mode and the activity will be limited to trials or modest sales
for use in sparse and highly-structured environments.
The growth phase will then commence. In this phase, the robots
will also become increasingly ready to handle more crowded environments and
their speed of travel and navigational technology
will significantly improve.  The unit sales
boom and the hardware product will become
commoditized. This way we will witness the rise of fleets of
small-sized last mile delivery robots.
For
further information please refer to our report Mobile Robots and Drones in
Material Handling and Logistics 2017-2037.This
report provides a comprehensive assessment of robots and drones in material
handling and logistics. It considers many uses cases beyond last mile
delivery robots including automated guided vehicles/carts; autonomous
industrial material handling vehicles, autonomous mobile carts, autonomous
mobile picking robots, and autonomous trucks
Agricultural vehicles: now and the future
The
traditional thinking is to develop larger, faster and more powerful
agricultural vehicles like mammoth tractors to boost productivity.
This has been sound thinking thus far: such vehicles amplify the productivity
of the driver, enabling it to cover more ground per hour in a limited time
window that the weather might permit.
As
discussed in our report Agricultural Robots and Drones
2017-2027: Technologies, Markets, Players, agriculture
is the leading adopter of autonomous mobile technology: we estimate that more
320,000 autosteer and auto-guidance tractors will be sold in 2018 (up
to level 4 autonomy). The technology is already evolving towards full navigational
autonomy (level 5). Indeed, as the numerous prototypes demonstrates the
commercialization emphasis has shifted from addressing technical issues towards
tackling commercial and behavioural challenges.
The
rise of autonomous mobility may also enable another type of agricultural
vehicle that might also at first seem like a strange creature: the
small, slow and lightweight agricultural robot (agrobot). These robots are
evidently less productive than a larger vehicletherefore you might wonder
why are they being seriously considered by players large and small around the
world? 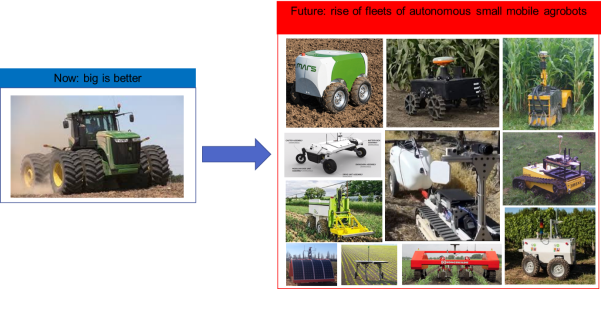 The
seeds of a paradigm shift in the way we envisage agriculture machinery have
been sown. In this shift few large, heavy, and fast vehicles are
replaced with large fleets of small, slow and light weight agrobots. Images
source for agrobots:  first column: FENDT; Queensland
University; Naio Technologies, Australia Centre of Field Robotics,
and ecoRobotix; second column: Earthsense, Idaho, andKongskilde; and
third column: Rowbot, Ibex Automation, and Vinerobot
The
answer here, as was the case in last mile delivery robots, is in fleet
operation. Autonomous mobility eliminates the need for a human driver per
vehicle, enabling the cost of the remote operator to be spread across the
fleet. This instantly lowers the operational cost per unmanned robot. As was
the case with last mile delivery robots, here we also find that
achievable operator-to-fleet-size ratios exist at which fleets of small
agrobots become attractive.
This
alone however may not be compelling enough since large tractors will also
become autonomous, lending themselves to fleet operation.  Such fleets
will reduce the headcount, cut down the wage bill incurred in farming and
open the door to limited precision farming.
Fleets
of small agrobots will go further in that they will enable
site-specific or even plant-specific ultraprecision farming. These
slow-moving robots will give each site the customized attention that it needs
all the way from planting to harvesting. This would be
akin toindustrialized gardening. This will boost yields and will also
significantly reduce chemical use. Furthermore, these light robots will cause
no soil compaction and will drive down energy
consumption, emitting no noise and CO2 since they are electrically
powered.
Here
too we are also at the beginning of the journey. We also see numerous such
robots developed at start-ups and research entities. We are also witnessing more
engagement from larger firms with some promising to take such robot swarms
towards full production. This is why our report forecasts that autonomous
small mobile robots will grow to more than $500M annual sales in 2028.
For further information please refer to our report Agricultural Robots and Drones
2017-2027: Technologies, Markets, Players. Thisreport develops
a detailed roadmap of how robotic technology will enter into different aspects
of agriculture and how it will change the way farming is done. It
will consider many applications and technologies including static milking
robotics, mobile dairy farm robots, autosteer tractors, autonomous tractors,
unmanned spraying drones, autonomous data mapping drones, robotic implements
for de-weeding, autonomous de-weeding mobile robots, robotic fresh fruit
harvesting, robotic strawberry harvesting, manned and unmanned robotic
lettuce/vegetable thinning/harvesting and so on.

Sharing is Caring, but is it Safe?