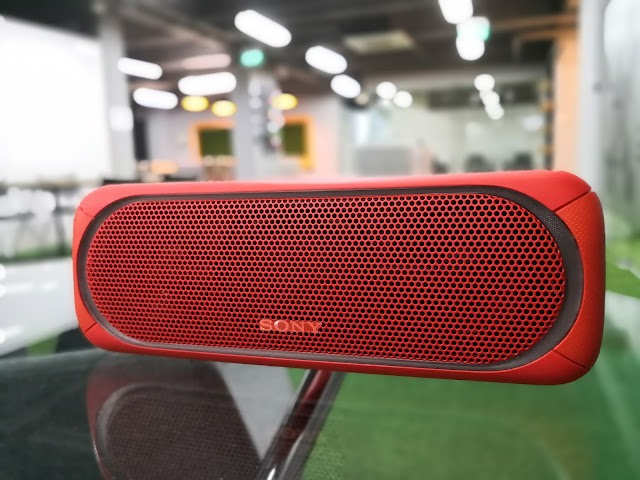 The Sony SRS-XB40 is a portable Bluetooth speaker that is part of Sony’s EXTRA BASS lineup. As the name suggests, the SRS-XB40 promises exceptional focus on great bass and audio quality. However, as we spend more time on it, we have come to realise that the SRS-XB40 is more what meets the eye. Let us take a deep dive, and explore the various features of the SRS-XB40 to find out how it sets itself apart from any other competing products.

For a start, simply based on specifications, we can see that the Sony SRS-XB40 is designed to perform. It is equipped with large 61mm satellite speakers, which are commonly found in typical desktop speakers. What we found a little unbelievable of the SRS-XB40 is the promise to produce deep sounding bass, despite of it only being a Stereo 2.0 setup. We thought it is impossible to include a subwoofer in a portable device, especially at this size. It would be surprising if the SRS-XB40 really can replicate the audio experience of a standard 2.1 audio setup. To find out how our audio experience is with this speaker, do head down to the audio section below. 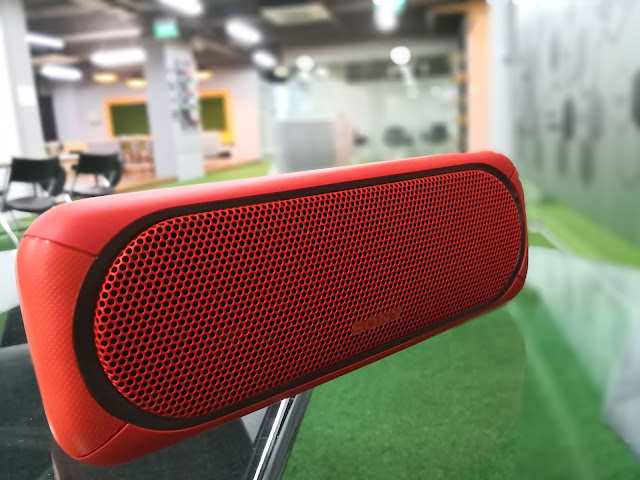 When it comes to design and color variants, the SRS-XB40 is available in Red, Blue and Black. The brightness of the red skin really allows the speakers to stand out from any other portable speakers in the market. The front grills of the speakers is made from metal and then painted red. This grill protects the internal satellites from any damage, while adding an additional textured feel to increase the sophistication of the overall product design. 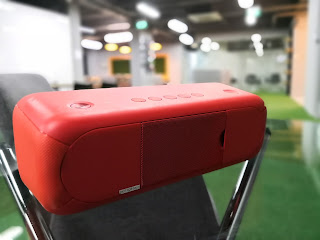 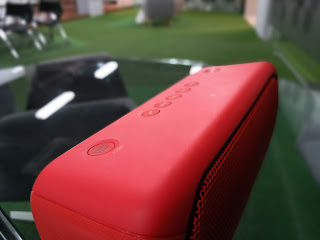 The main body of the SRS-XB40 is made from a rubbery material, which gives the portable speaker unit its rugged properties. This is done to allow the SRS-XB40 to withstand some impact that is thrown at it, as the rubber finish softens any impacts made directly at it. 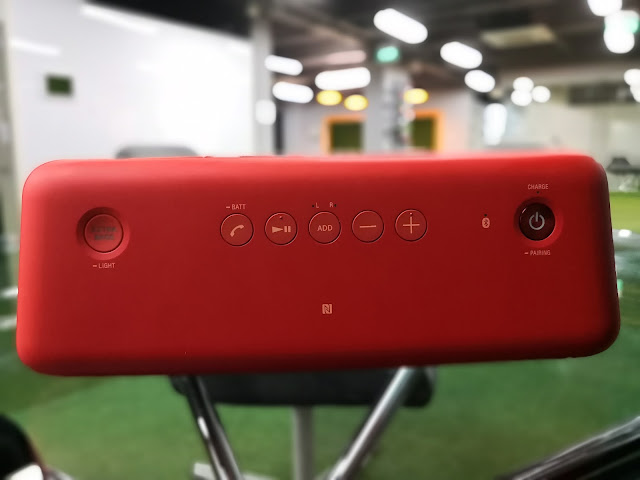 Functional buttons are placed at the top of the speaker unit. Starting from the right, there is the power button, which also doubles as a Bluetooth pairing button. In the middle are standard multimedia buttons, call button, as well as the ADD button for wirelessly daisy chaining multiple speakers together for the ultimate audio experience. The other large button on the left side is the EXTRA BASS button, which can dramatically increase the bass output of the speakers. Moreover, it is also the speaker light’s toggle switch. We were glad that the symbols and labels are already printed on the buttons itself, and learning how to operate the speakers was extremely straightforward and simple. 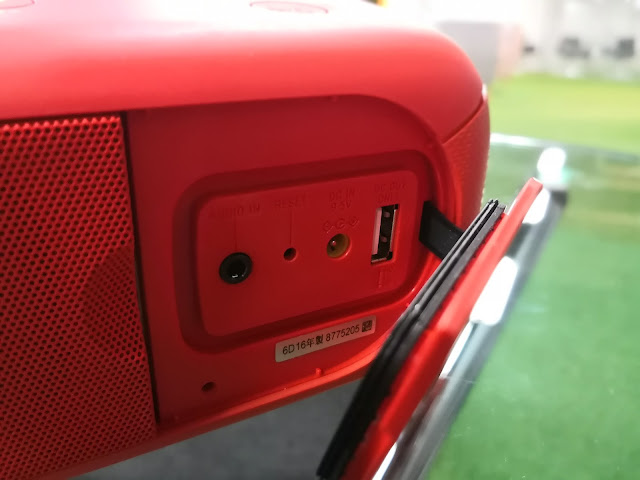 Of course, the Sony SRS-XB40 can also be connected to any wired audio devices via the standard 3.5mm audio interface. Sony has surpassed expectations for the battery life on the SRS-XB40, as the unit is said to provide approximately 24 hours of audio time on a single charge. It is also due to the large battery capacity of the SRS-XB40, that caused it to weigh quite heavily – about 1.5KG. Regardless, this speaker is still considered portable, as it can be easily brought around with its internal battery. Moreover, the SRS-XB40 even features a USB port that allows the charging of external devices, like your phone! That will definitely come in useful when you are out and about the entire day.
Did you realise that the ports are sealed tightly using a cover rather than being directly exposed? That is because the SRS-XB40 is also rated IPX5. This essentially means that the speakers are waterproof and can operate in wet conditions! 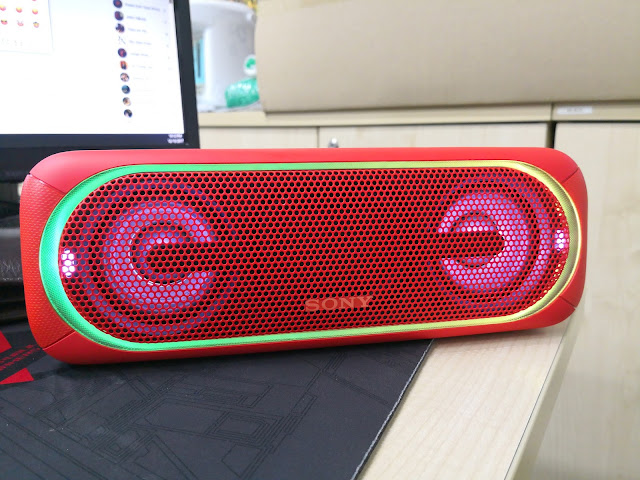 Although not fundamental to the whole functionality or performance of the speaker unit, the lighting system on the SRS-XB40 does set the mood for the songs, regardless of its genre. We were fascinated with the accuracy of the speaker’s adaptation of lighting effects to the sounds coming from the speakers. The additional visual effects do make a difference to the overall experience.

The Sony SRS-XB40 comes with its EXTRA BASS functionality, which essentially boosts the bass intensity from the speakers. This feature can be activated with the EXTRA BASS button on the speakers. Music listeners who prefer lesser bass can also deactivate the function, which could also be preferred for certain genres of music.
Based on our experience on the SRS-XB40, we felt that the EXTRA BASS function does make a huge difference in terms of the speaker’s audio profile. We felt that with the feature activated, the speaker was able to better create that contrast between sounds from different frequencies.
How Sony does it is by using two passive radiators that works together to enhance the low frequencies, while improving the bass-iness from the speakers. These audio radiators really do wonders. The bass coming from the SRS-XB40 was simply amazing. Regardless of the quality of audio input, there was not a time when the lows were distorted. They simply sound amazing and was adequately “thumpy”.

To be honest, without the EXTRA BASS feature, we felt that the SRS-XB40 lacked the edge that set itself apart from any other speaker system. Yes, it is considerably clear in mids and highs as well, but because of the lack of distinctness in its audio profile, the sounds seem rather flat. That is also why EXTRA BASS can seemingly make such a big difference to the overall quality of the speaker, as it brings out the crisp trebles and other mid to high frequency sounds.
Overall, the SRS-XB40 is a good choice if you are looking for a portable speaker for EDM, remix songs, or songs with emphasis on the lower spectrum of audio. The accompanying lighting effects can let party-goers “feel the vibe” and makes you just simply want to “move to the beats”. We were glad that the lights were well-toned and weren’t too flashy.

Usually bassy sounds needs to be reproduced with a subwoofer to be able to reproduce ultra-lows. It is also surprising that the speakers was capable of doing it within a small portable body. These was all thanks to its audio radiators that made the magic possible.
Not to mention, the SRS-XB40 does really well for most kinds of song genres. From bass-lovers to pop music, it provided us with a pleasant listening experience. However, for those who enjoy listening to classical music or vocal-heavy music will be a little disappointed. Its highs to high-mids are simply not its strong point.
With this much said, Sony’s SRS-XB40 is an excellent choice for partygoers as its large focus on bass can attract a huge crowd. Additionally, its portability and surprising performance for its size is a great bonus.