Microsoft recently released a new 2-in-1 in their Surface Pro lineup, called … Surface Pro, ditching the numbering in their fifth-generation. When we refer to the Surface Pro (2017), we will be referring to it as the Surface Pro so as to not confuse it with their older model released at 2013. Let’s find out how its latest model differentiates itself from its predecessor as well as other laptops. 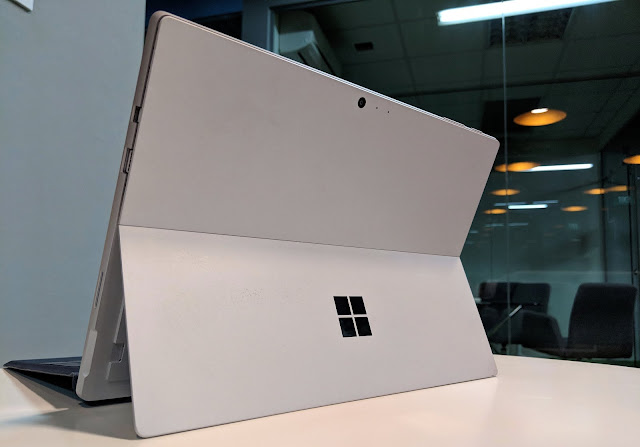 Because of aforementioned kickstand, the touchscreen is very stable when in use. This removes the screen wobble that is common in typical touchscreen laptops these days. Not to mention, its hinge is now able to fold up to 165 degrees, which they call a “full Studio Mode”. This makes the Surface Pro a lot more versatile by simplifying for several use cases, such as sketching using their Surface Pen. 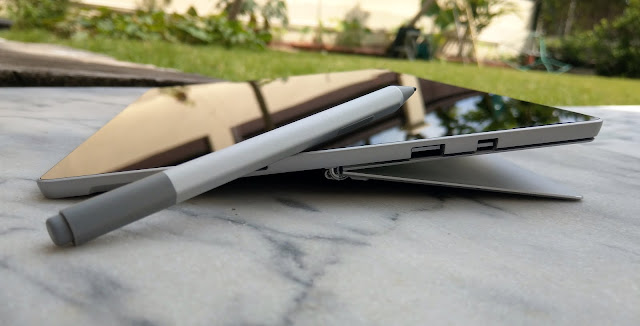 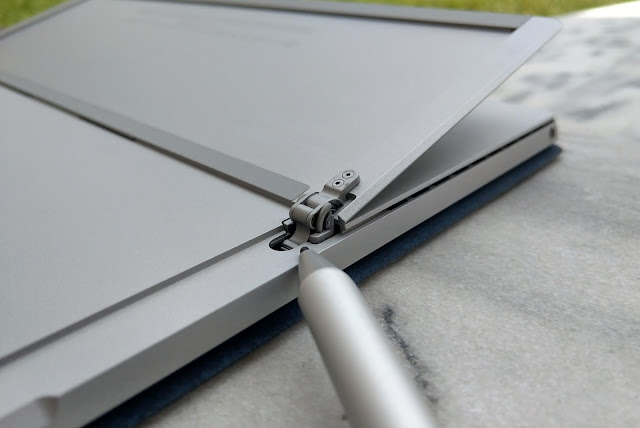 When it comes to I/Os, the ports of the Surface Pro is the same as the previous – pretty sparse. With only a single USB-A 3.0 and a microSDXC card reader, connectivity is limited. Additionally, there is only a Mini DisplayPort for your display needs. This decision is probably to keep the device light, sacrificing functionality for design. 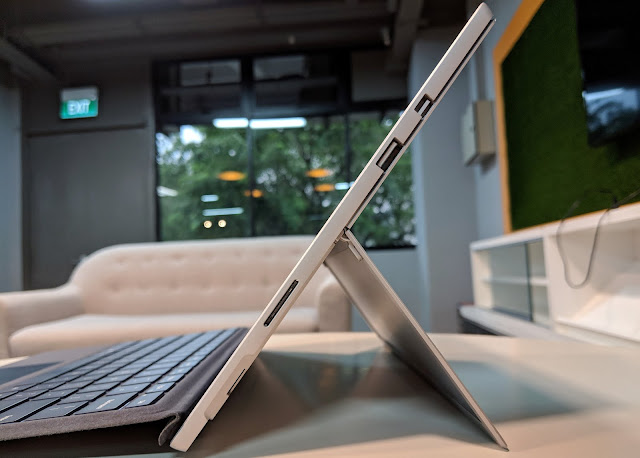 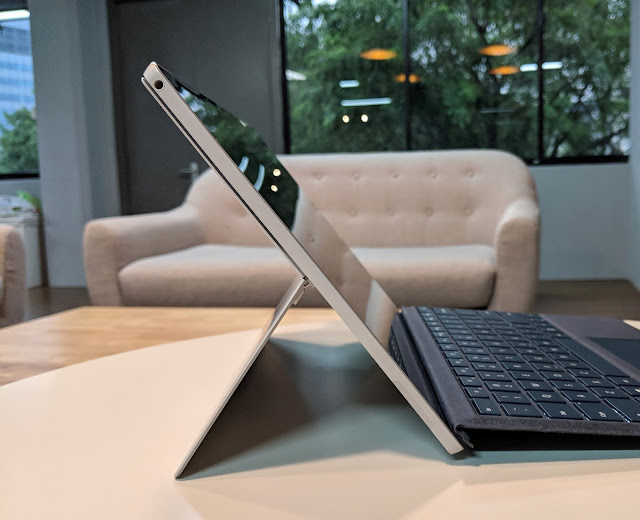 Coming from an already light laptop, ASUS Zenbook UX305F that weighs at 1197g, the Surface Pro feels comparatively much lighter. The entire setup, weighing only 1080g (770g body + 310g Type Cover), requires little effort to be carried around all day. Its weight also makes it really easy to use it like a typical tablet, as it is light enough to be carried comfortably with a single hand. Not to mention, it is nearly as thin as a smartwatch! 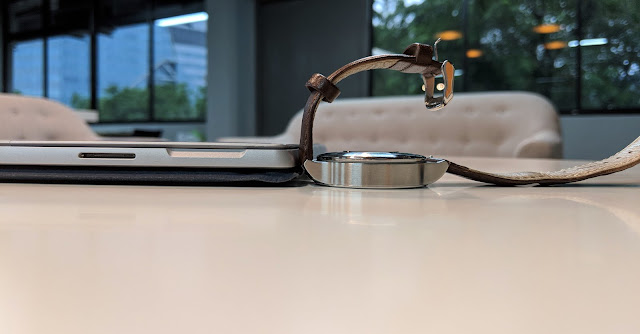 Even at heavy load, heat is not a major problem. This is because of the placement of its heat-generating components is near the top of the tablet, right around the camera. This makes it comfortable when handling it under full load, as your hands are seldom near its warmest section.

The Surface Pro boots up crazy fast, needing only 15 seconds to reach Windows home screen. This also takes into account going through the lockscreen using Windows Hello. How it does this is by two main features, its SSD and Windows 10’s “Fast Startup” feature.
Included in the Surface Pro is a Samsung PCIe NVMe at 256GB, which is blazing fast while only sippy battery. Due to SSDs having no moving parts, as compared to its slower brother – HDD, it is also much more durable. Your storage size can be configurable, ranging from 128GB to 1TB of storage space. 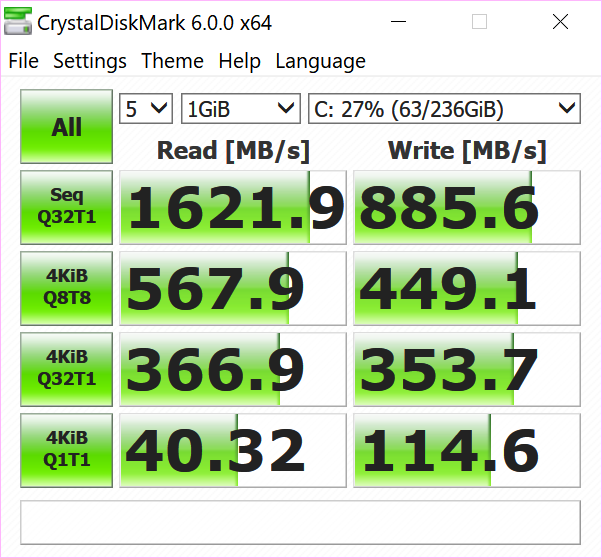 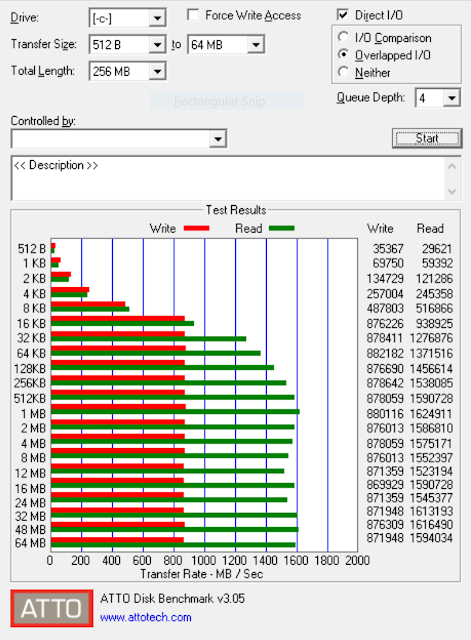 Microsoft provided multiple types of configurations for the processor, all using the 7th-generation Intel Kaby Lake Core processors – m3, i5 and i7. The model we have is powered by Core i5-7300U (2.60GHz – 3.50GHz) with Intel® HD Graphics 620. The i5 is a dual-core CPU with hyperthreading, with the clocks running at 2.6GHz to 3.5GHz with turbo. Not to mention, its processors are efficient enough to be cooled passively, improving battery life as fans are no longer involved. 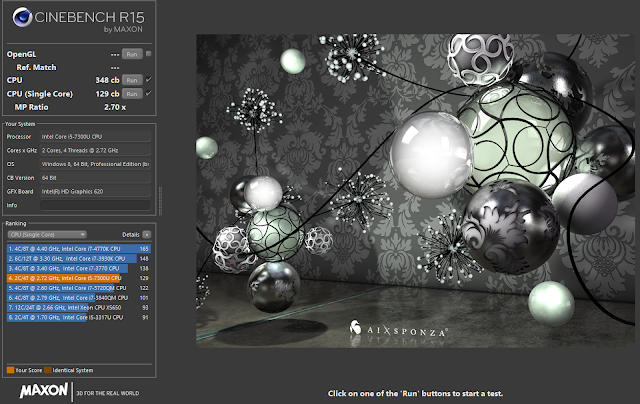 As stated previously, it does not contain any discrete graphics card. This can severely weaken the performance in graphically intensive workloads, mainly gaming or rendering. Additionally, its native resolution, being 2736 x 1824, would be too much for the integrated graphics to handle. Yes, that resolution would be great for productivity as more can be seen at once, however it would impair the gaming performance.
But once the resolution is lowered down to 1920×1200 or lower, popular casual games becomes playable. In a MOBO game called Dota 2, with the graphics setting set to the “fastest” preset, it was able to maintain 60 fps only with occassional dips to 40s. Considering that the Surface Pro is a literal lightweight, the gaming performance is decent enough. 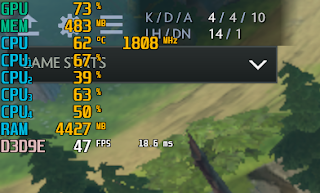 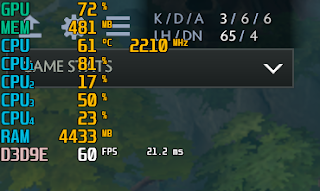 As shown in the screenshots above, it also seems like there is some thermal throttling that caused the CPU clock to drop from 2210MHz to 1808MHz. This also further lowered the framerate to the realm of 40s.

To transform the Surface Pro from a tablet to a 2-in-1, Microsoft introduced the Signature Type Cover. This can be bought to increase productivity as the tablet’s own touchscreen keyboard takes up nearly half the entire screen. As such, the Type Cover is really needed to improve the workflow. With all things said, any old Bluetooth keyboard or mouse is still compatible with it. 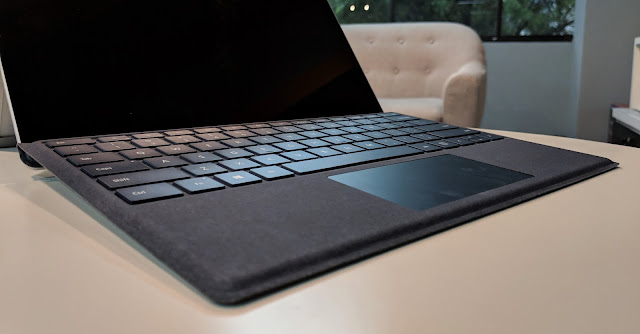 When it comes to actually using it, the Type Cover’s touchpad is surprisingly well-designed. Not only is it responsive, it is also quite accurate for a touchpad. This can be attributed to the material used to  balance the smoothness and grippiness well. Apply slight pressure, and control of the cursor is extremely fluid. Apply more force, and the accuracy increases. 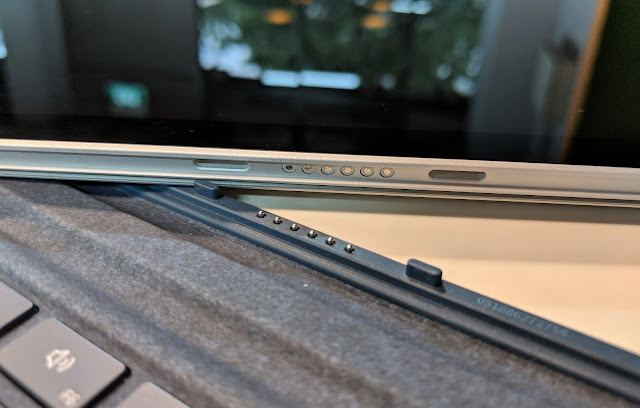 Typing on it is what you would expect for a ultra-slim and well-built keyboard, crisp. Not only is it not mushy, it is also great for touch-typist that do not enjoy keys with long actuation distance. Not to mention, when using on the lap as an actual laptop, the entire setup is more comfortable than other typical laptops. This is because of its overall light weight, and the Type Cover lifting itself up, providing enough ventilation to keep your lower body cool.
The Signature Type Cover weighs a tiny 310g, while it goes for a steep S$249. However, because of how the Surface Pro itself is not a complete package, the Type Cover is definitely a must buy. 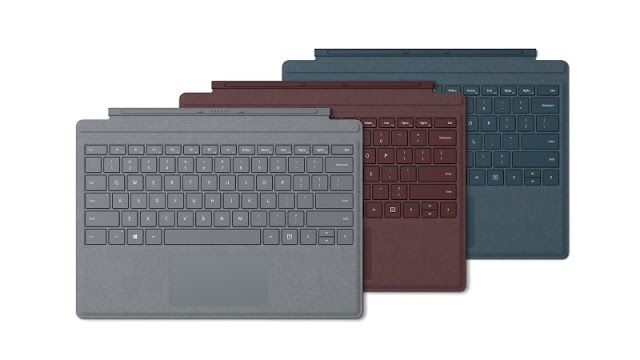 It is covered by a material called Alcantara, that gives it a suede-like and premium feel. The Type Cover comes in three colors – Platinum, Burgundy, and Cobalt Blue. 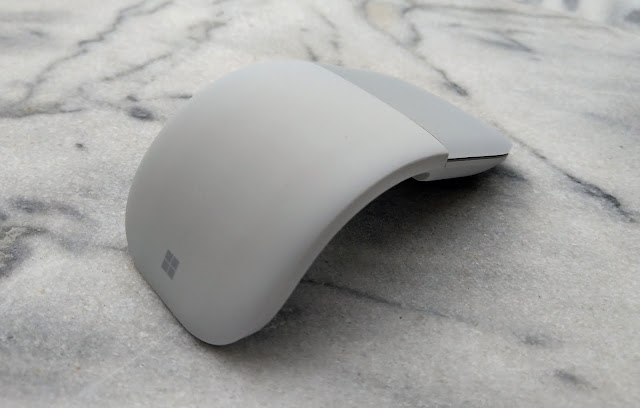 The Arc Mouse is extremely portable with its slim form factor. However, it can take awhile to get use to the lack of two distinct buttons, especially its right button. Finding the sweet spot to activate the middle-click and right click can be a challenge. I do find myself relying on the touchpad/touchscreen instead. On the other hand, this goes to show how well the Signature Type Cover is designed. 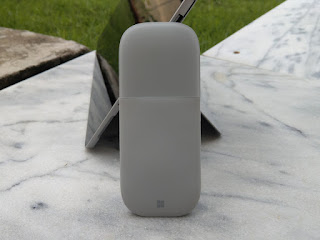 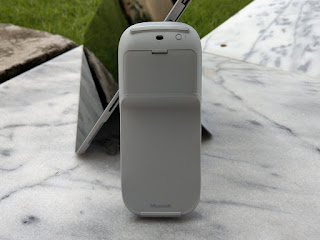 At a whopping S$118, and it being easily replaceable by any other Bluetooth mouse, it can tough to recommend. Unless you are short of space in your bag, or a slim mouse is a must have for you, the Arc Mouse can be skipped.

As mentioned previously, the “Windows Hello” login feature is surprisingly convenient. Simply face the screen and viola, the device is unlocked and ready to be used. This is one of the most underrated feature of Windows 10, and the Surface Pro highlights how well the feature can be practically used.

Additionally, the laptop was able detect the face under even the darkest conditions. In a pitch black room, the Surface Pro uses an infrared camera to detect your face as fast as under sunlight. Great job Microsoft!
Its front and rear-facing camera are passable, with newer phones nowadays meeting and even beating the quality of photos taken. At least it is decent enough to hold a video call, and is placed at a proper location without any awkward angles. *Cough* XPS 13 *Cough*.

When it comes to the speaker location, the design is quite well-thought-out. Its speakers are similarly colored as their bezels, not breaking the flow of its smooth body. Unless it is viewed from a weird angle, the speakers are not clearly visible. 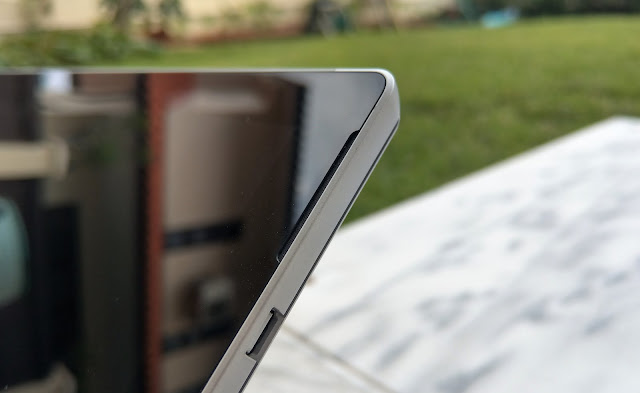 Not only are the speakers loud, they are also comparable against decent portable Bluetooth speakers. When it comes to its sound signature, it is pretty neutral but struggles to hit the lows in bassy songs. However, it can sound sharp with a little distortion when above 80% in volume.

Who Should Buy It 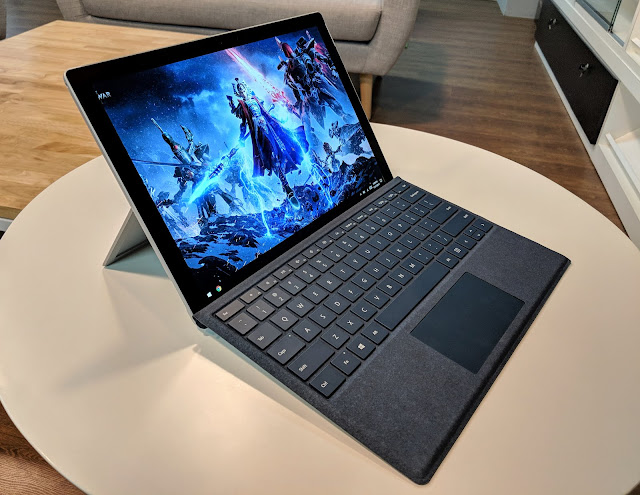 With everything laid out, the Surface Pro (2017) is suitable for those on the go. It is also for those who require a versatile device, that can act as both a tablet as well as a laptop. Considering its extremely light weight, students that often travel around campus can benefit greatly from this device.