NVIDIA has
Five Never-Before Seen Screenshots  of
the Upcoming PUBG Desert Map!
5000 GeForce Experience
Members will get PUBG for Free 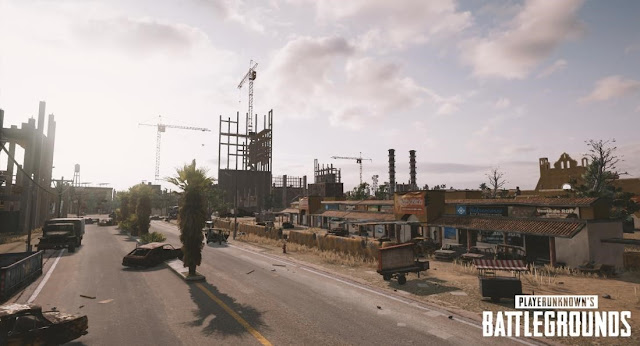 SINGAPORE — November 17, 2017 — Today NVIDIA revealed five
exclusive screenshots for the upcoming desert map for the wildly popular PlayerUnknown’s Battlegrounds (PUBG).
The five screenshots showcase a
landscape that’s quite different from Erangel, with a war-torn city area that
features multiple multi-storey buildings in various states of construction and
decay and a strip mall shopping plaza. The rural areas are set in a harsh
desert landscape that would be right at home in a spaghetti-western. There are
lots of wide-open desert areas with the familiar patches of development and
isolated structures such as small villages, warehouses, and single-storey
houses.
Oils rigs, canyon walls, towers,
and cranes should make for some interesting snipping, while the denser
cityscapes should intensify scavenging. The desolate landscape is sure to make
for some
NVIDIA has
Five Never-Before Seen Screenshots of the Upcoming PUBG Desert Map!
white-knuckle final circle
encounters, as there is not a lot of landscape cover when the circle tightens
and forces you into open areas.
And don’t forget, when the
desert map arrives, capture all deaths and kills automatically with NVIDIA Highlights.
5000
GeForce Experience Users Get PUBG for
free!
To celebrate the upcoming PUBG
desert map, NVIDIA will be giving away 5000 copies of
PUBG to GeForce Experience members. Codes will be delivered via the GeForce
Experience client on November 21.
Related
Links:
•
Five exclusive screenshots on GeForce.com: https://www.geforce.com/whatsnew/articles/playerunknowns–battlegrounds–pubg–nvidia–desert–map–screenshots
•
GeForce Experience Rewards info on GeForce.com: http://www.geforce.com/geforceexperience/giveaways–en
•
PlayerUnknown’s
Battlegrounds: https://playbattlegrounds.com/main.pu
•
PlayerUnknown’s
Battlegrounds Gets NVIDIA Highlights article on GeForce.com: https://www.geforce.com/whats–new/articles/playerunknowns–battlegrounds–addsshadowplay–highlights–and–hbao–plus
•
Using NVIDIA Highlights in PlayerUnknown’s Battlegrounds article on GeForce.com: https://www.geforce.com/whats–new/guides/playerunknowns–battlegrounds–pubgshadowplay–highlights–guide
•
Game Ready with PlayerUnknown’s Battlegrounds: https://www.nvidia.com/enus/geforce/products/pubg/
Keep
Current on NVIDIA
Subscribe to the NVIDIA blog, follow us on Facebook, Google+, Twitter, LinkedIn and Instagram, and view NVIDIA videos on YouTube and images on Flickr.
About NVIDIA
NVIDIA‘s (NASDAQ: NVDA) invention of the GPU in
1999 sparked the growth of the PC gaming market, redefined modern computer
graphics and revolutionised parallel computing. More recently, GPU
deep learning ignited modern AI — the next era of computing — with the GPU
acting as the brain of computers, robots and self-driving cars that can
perceive and understand the world. More
information at http://nvidianews.nvidia.com/.