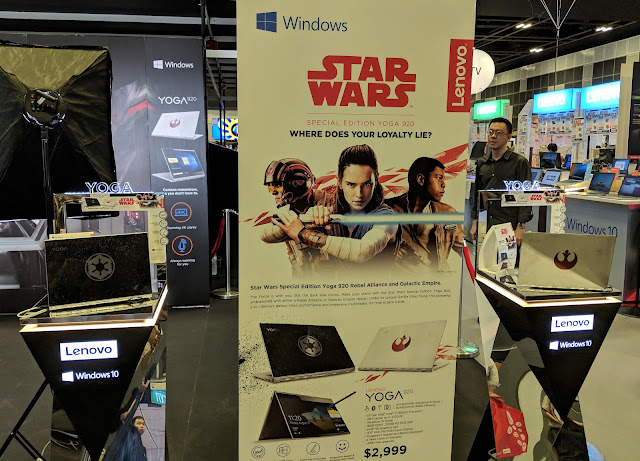 Lenovo just launched their Star Wars Special Edition Yoga 920 convertible laptop that comes with Rebel Alliance and Galactic Empire designs, and is only possible thanks to their collaboration with Disney. You can definitely look forward to more Lenovo products that are Disney-themed. These special models come with beautifully glossed backs, protected by Gorilla Glass. On each version, you can get either of the faction’s logo etched onto the backs of the laptop. 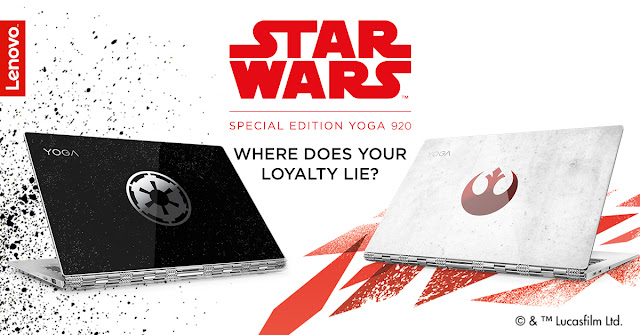 To match the designs at the back, Lenovo also provides a pre-installed wallpaper that is suited for rebel scums or fitting for the mighty Emperor’s hand. 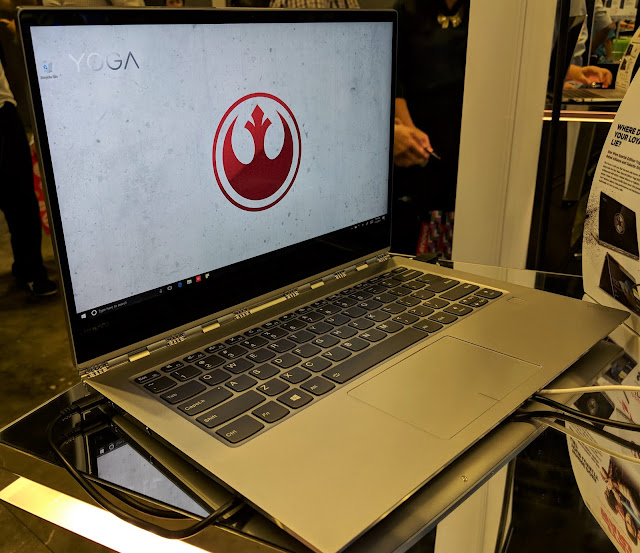 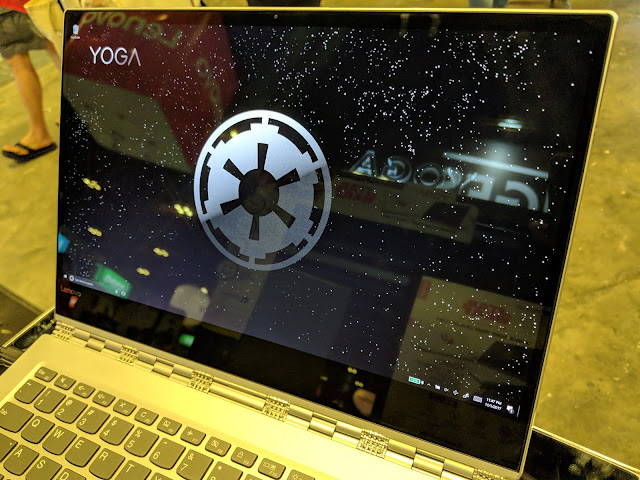 Additionally, the Special Edition (at S$2999) is roughly S$300 cheaper than the normal counterpart due to the smaller storage size. Act fast as there is only 100 units in Singapore, 50 black and 50 white. For a closer look, or a hands-on experience, do check out Lenovo’s booths at CEF 2017, Suntec City Convention Center Level 3. The booth is located right next to the entrance. 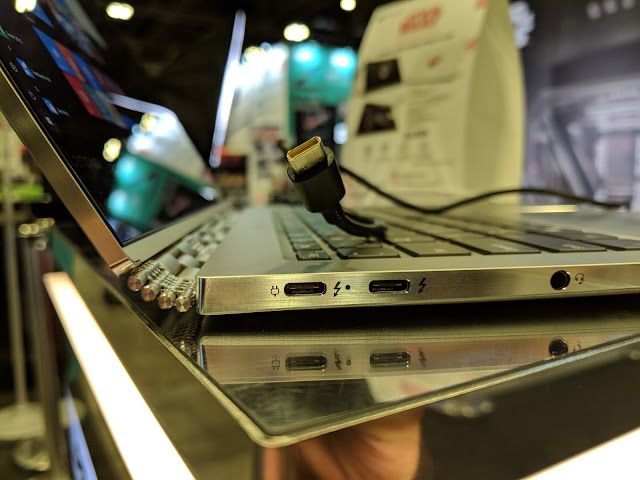 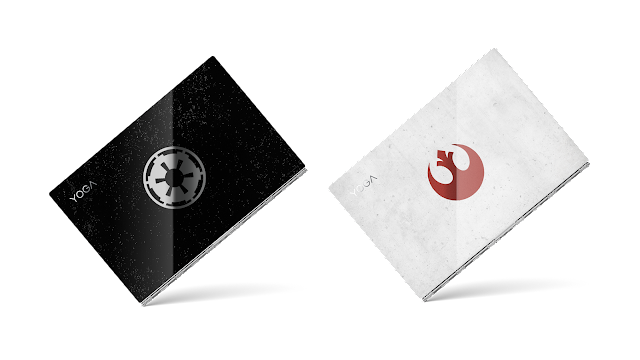 SINGAPORE, 2 NOVEMBER 2017 – Lenovo (HKSE: 992) (ADR: LNVGY), the world’s leading PC manufacturer, today announced that its highly anticipated, limited edition Star Wars-themed  Yoga 920 is coming to a galaxy near you.
Coming in two versions with visually striking and head-turning Gorilla® Glass covers, the Star Wars Special Edition Yoga 920 will be available in Singapore on 2 November. A white version of the Yoga 920 features an etched logo of the Rebel Alliance, while those who want to represent the imperial forces can buy the black version etched with the emblem of the Galactic Empire. 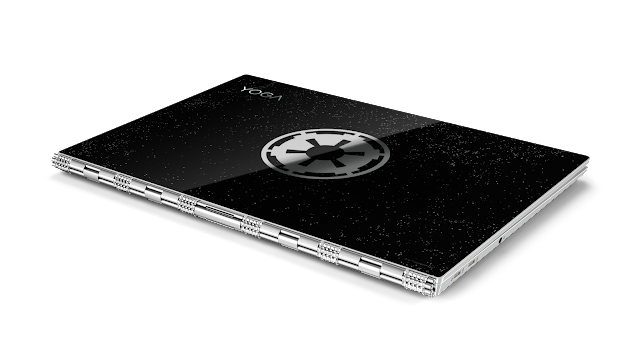 The slim and sleek Yoga 920 series is renowned for its intricately-tooled watchband hinge, a beautiful all-metal unibody design weighing just 1.37kg, and a near edgeless 4K display, making it ideal for immersive entertainment and unparalleled productivity.
In terms of its design and hardware, the Star Wars Special Edition Yoga 920 is as futuristic as it looks and sounds, featuring:
•       Up to 8th Generation Intel® Core i7 processor, 16GB memory, 1TB of storage and 15.5 hours of battery life;
•       An 13.9” UHD and FHD wide-angle IPS touchscreen;
•       Windows® 10 OS and twin Thunderbolt 3 technology ports;
•       An integrated fingerprint reader for secure, instant biometric authentication;
•       four modes: typing in laptop mode, presenting in stand mode, browsing in tablet mode, or watching videos in tent mode;
•       Far-field technology that enables Cortana — a voice-activated intelligent assistant — to recognise voice commands from up to four meters away. Use Cortana to easily add items to a shopping list, play music, check the traffic, send a short email, track packages and much more. Cortana even uses AI to learn from its owners, so the Yoga 920 grows smarter over time;
•       And an optional Lenovo Active Pen 2, which enables pen-on-paper precision — with 4,096 levels of pen sensitivity — with no discernible lag. 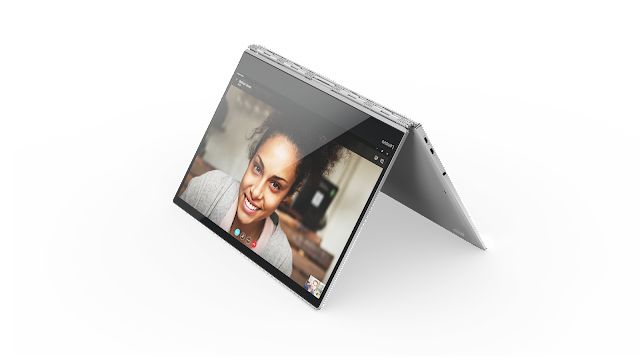 SOCIAL MEDIA CONTEST
Between 15 – 28 November, 2017, 15 lucky Lenovo and Star Wars fans in Singapore will stand a chance to win a Star Wars Foldable Back Pack* by taking part in an online contest.
Fans simply need to visit Lenovo Singapore’s Facebook Page and let us know which side they want to be (Rebel Alliance, or Galactic Empire) and why in no more than 25 words. They have to share their answer on Lenovo’s Facebook post with the following hashtags: #LenovoAllianceSG #StarWars #TheLastJedi #Yoga920 #DifferentIsBetter
Terms and conditions apply. Visit Lenovo Singapore’s Facebook Page for more information.
*Prizes are subject to change

“As a proud pioneer of the 2-in-1 convertible laptop, we are excited to introduce the latest member of our award-winning Yoga Family series to customers and Star Wars fans in Singapore in time for the festive season,” said Khoo Hung Chuan, General Manager of Lenovo Singapore and Malaysia. “Our Star Wars Special Edition Yoga 920, which comes with a personalized design and immersive experience, is a testament of Lenovo’s vision in customer centricity. This ultimate device will be a wonderful fit for those who want to stand out from the crowd, yet also value productivity and flexibility.”

Lenovo (HKSE: 992) (ADR: LNVGY) is a US$43 billion global Fortune 500 company and a leader in providing innovative consumer, commercial, and data center technology. Our portfolio of high-quality, secure products and services covers PCs (including the legendary Think and multimode Yoga brands), workstations, servers, storage, networking, software (including ThinkSystem and ThinkAgile solutions), smart TVs and a family of mobile products like smartphones (including the Motorola brand), tablets and apps. Join us on LinkedIn, follow us on Facebook or Twitter (@Lenovo) or visit us at www3.lenovo.com/sg/en.

WhizComms Home Broadband Turns 1, and Customers are in for A Treat!