Kuala Lumpur, November 20, 2017 — According to InfoWatch
Analytical Center, global mass media and other open sources reported 925
confidential information leaks in H1 2017, which is 10% more than in H1 2016.
In January-June 2017, data leaks caused 7.78 billion personal and payment data
records being compromised, including social security numbers, bank card
details, and other critical data, as compared to 1.06 billion during the same
period in 2016 and some three billion records compromised for the entire 2016
globally.

Such dramatic growth in H1 2017 was
due to 20 mega leaks (10+ million records each) that accounted for 98% of all
personal and finance data compromised. Compared to H1 2016, there were 20% more
payment data leaks and 20% fewer personal data leaks.

Internal offenders caused 58% of
global cases, with an average number of compromised records soaring up to 13.6M
records per leak caused by external intruders (2.4M in 2016) and 4.5M records
per leak by malicious insiders (0.8M in 2016).
“Since the beginning of 2017, we have
been witnessing the sprawl of compromised data and damage caused by sensitive
information leaks,” said Sergey Khayruk, Analyst, InfoWatch Group. “Digital
economy development makes cybersecurity move beyond its own sector and become a
topic of discussion at the highest possible level. An increasingly better
understanding of data leaks should contribute to overall information security
awareness, even in Russia, where affected organizations are starting to assess
damage caused by a particular leak. To minimize these risks, enterprises need
an integrated approach to cybersecurity, including tools for protection against
internal and external threats.”
The share of data leaks associated
with unauthorized data access (abuse of access privileges and internal
espionage) are less than 8% of all cases, while unskilled leaks unrelated to
the abuse of access privileges or data fraud are recorded in 84% of cases.

Compared to H1 2016, the reporting
period saw more leaks through the network channel and email and fewer leaks through
equipment loss/theft, removable media, and paper documents. 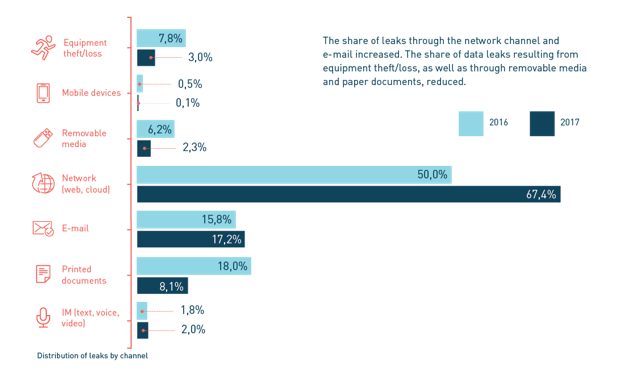 The most marketable payment details
mostly leaked via browsers or cloud storages (45%) and corporate email (44%).
Data leaks were detected most often
in healthcare and least often in manufacturing and transport sectors. Hi-tech
companies, including online services and major portals, recorded the largest
volume of compromised data, while 16% of all compromised records leaked from
government authorities. 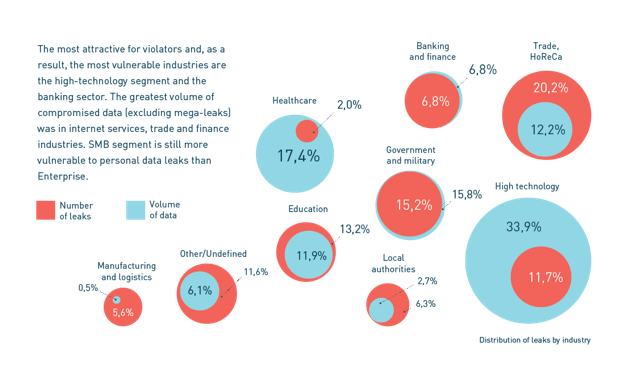 Over the reporting period, criminals
were mostly interested in banking and high-tech sectors, where more than a half
of the personal data leaks were of malicious nature.

“Commercial and governmental services
operate an ever-growing volume of electronic and therefore extremely marketable
data,” noted Mr. Khayruk. “Both high-tech and financial sectors are very
exposed to data leaks and extremely attractive to intruders, with the majority
of data being compromised there maliciously. At the same time, these very
sectors drive digital economy, which, as it evolves, requires better regulation
and cybersecurity for digital transformation processes.”
– E N D S-
About InfoWatch Group
InfoWatch Group is
a Russian vendor of end-to-end enterprise cybersecurity solutions that
effectively protect businesses against the most pressing internal and external
threats. InfoWatch annually boosts its product and solution sales and leads the
DLP markets in Russia and the CIS, with the company’s products being also
commercially available in Western Europe, the Middle East, India and Southeast
Asia. https://www.infowatch.com/
More information
about InfoWatch Group of companies is available at www.infowatch.com

BECOME THE HERO IN STAR WARS™ BATTLEFRONT™ II, LAUNCHING ACROSS THE GALAXY TODAY