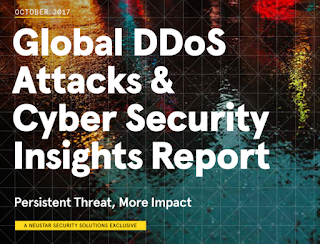 October 12, 2017 –SINGAPORE. – Neustar, Inc., a trusted, neutral provider of real-time information services, today released its bi-annual Global DDoS Attacks and Cyber
Security Insights Report, affirming DDoS attacks continue to be an
effective means to distract and confuse security teams while inflicting serious
damage on brands. The report highlights that brands experienced a 27
percent increase in the number of breaches per DDoS attack, despite
suffering similar attack levels in the same time period last year.
Data from the report shows
attackers are achieving higher levels of success against brands they only hit
once: 52 percent of brands reported a virus associated with a DDOS attack, 35
percent reported malware, 21 percent reported ransomware and 18 percent reported
lost customer data. Over a twelve-month period, 75 percent of
respondents recorded multiple DDoS attack attempts following an initial assault
on their brand’s network. The resulting breach ratio increases as the number of
DDoS attacks increases, but the net result is it only takes one attack to
breach a brand’s defenses. Findings suggest that cybercriminals are focused on
taunting defenses, probing network vulnerabilities and executing more targeted
strikes, instead of making noise with a singular, large attack.
“Organisations across Asia Pacific
are not only being attacked more often, but also increasingly suffer from
breaches, including malware activation and customer data theft, exposing
themselves to financial and repu-tation damage,” said Robin Schmitt, General
Manager, APAC at Neustar. “Businesses must continue to invest and improve their
defences against the sheer power of the attackers, especially with so many
organisations in the region simultaneously managing their digital transformation
initiatives.”
Key findings from the report
include:
Brands are continuing to make DDoS
protection a budget priority, with layered defenses and web application
firewalls (WAFs) listed as a top investment. Respondents noted that on average
their brands have at least two components of DDoS protection that can include
appliance hardware, cloud services, and hybrid deployments. Notably, protection
against application layer threats has increased significantly with WAF solution
deployments nearly tripling in the past year. Using web application firewalls
to protect the most exploited layer in the network stack reflects a brand’s
drive for the right combination of defenses in an effort to protect against
growing concerns associated with DDoS attacks.
Top motivators for increased
budget spend on DDoS protection include:
“Brands need to continuously
diversify their security strategy for DDoS – it’s no longer ‘good enough’ to
accept a pre-packaged solution as the cornerstone of your security portfolio,”
said Barrett Lyon, Vice President of Research and Development, Neustar Security
Solutions. “Writing application code is difficult, but it is also fraught with
security failings and attackers know this. Brands are making investments in
layered protection, including the deployments of WAF solutions, to level the
playing field and decrease the time cybercriminals will have to execute a
successful attack.”
Methodology:  Neustar and
Harris Interactive conducted the global, independent research of 1,010
directors, managers, CISOs, CSOs, CTOs, and other C-suite executives to find
out how DDoS attacks affect their brands and what measures are in place to
counter these threats. The respondents span many industries, including
technology, financial services, retail, healthcare and energy.
Join Neustar on October 24 for
the first International DDoS Awareness
Virtual Conference to learn how brands can protect themselves against cyber threats and fight DDoS attacks.
The full Global DDoS Attacks and
Cyber Security Insights report can be downloaded here.
About Neustar Security
Solutions
Neustar Security Solutions defend
against network threats, inform you of potential network vulnerabilities,
accelerate online asset performance, and monitor client website performance
through multiple services and offerings. Neustar will offer the largest, most
distributed DDoS mitigation network in the world with over 10 Tbps of capacity,
and our industry leading SiteProtect DDoS defense service ensures full coverage
in an attack. Our UltraDNS service manages 10% of all internet traffic, routes
over 1 trillion queries a month and provides industry leading uptime with 100%
availability. Our nearly 20 years of unparalleled expertise ensures that our
customers are protected and optimized during normal business practices and when
unsolicited events occur. Our services ensure customers network connectivity
are protected and optimized whether in crisis or just business as usual. We are
trusted by many of the world’s largest brands to keep their mission critical
systems up and running. More information is available at https://www.neustar.biz