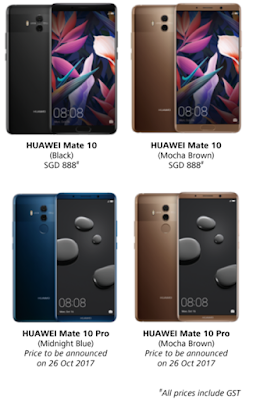 Today, Huawei launched the HUAWEI Mate 10 Series in
Munich – this announcement heralds a new era of intelligent phones. The HUAWEI
Mate 10 and Mate 10 Pro are AI-devices that combine innovative hardware, the
latest Kirin 970 chipset, as well as EMUI 8.0 on the newest Android 8.0.
Some of the key
features of the Mate 10 Series include:
·  FULLVIEW VIVID, DISPLAY: A 3D glass body featuring a
barely-there-bezel, HUAWEI FullView Display and HDR10 supported technology for
intensely vivid and brighter colours
·  LONG-LASTING AND FAST CHARGING: HUAWEI SuperCharge, and the 4000 mAh battery
comes with AI-powered Battery Management
·  AMAZING DUAL CAMERA IN A SMARTPHONE: New Leica Dual Camera with SUMMILUX-H
lenses, with both featuring an aperture of f/1.6, and intelligent photography including
AI-powered Real-Time Scene and Object Recognition and AI-powered Bokeh Effect
Huawei fans can now
register their interest or pre-order their Mate 10 Series:
·  Registration of Interest for the Mate
10 and Mate 10 Pro will be available from 17 October at http://consumer.huawei.com/sg/
·  Pre-orders for the Mate 10 will
be available exclusively on Lazada Singapore (http://www.lazada.sg/huaweiMate10), and
Huawei Concept Stores between 17-23 October 2017
Huawei
Unveils the Ultimate Intelligent Phone Series –

Design Qualities for New Levels of Sophistication
and Comfort

With an all-new HUAWEI FullView Display, the HUAWEI Mate 10
features a stunning 5.9-inch screen with a 16:9 display, barely-there-bezel and
HDR10 to support vivid colours. The 6-inch HUAWEI Mate 10 Pro features an 18:9
OLED display, high screen-to-body ratio and HDR10 for dynamic video viewing.
The iconic devices feature a 3D glass body, beautifully and
symmetrically curved on all sides for an ergonomic hold.
The HUAWEI Mate 10 Pro is also IP67 Water and Dust
Resistant.

For more information, please visit: http://consumer.huawei.com/sg/.
[1]
Based
on Huawei’s laboratory testing results.
[2] Based on Huawei’s
laboratory testing results. In the test, the device was charged from 1 per cent
battery with the display switched off, through the HUAWEI SuperCharge charger
and cable, in an environment with a 4G network, 25°C temperature, and relative
humidity of 45-80 per cent.