Here are all of GIGABYTE’s New X299 AORUS Gaming Motherboards

At COMPUTEX 2017, we were introduced to
many new motherboards that are based on the new Intel’s X299 enthusiast chipset.
Despite the various controversy on the strategic decisions made by Intel,
motherboard manufacturers were still able to make do with what they have on
hand, and deliver the best possible solutions for enthusiasts. Let’s take a
look at the four new GIGABYTE AORUS Gaming X299 motherboards that are designed
very specifically for different types of gamer. 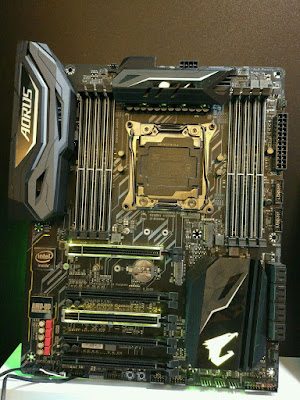 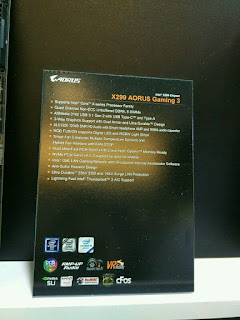 If you are simply looking for a new and
reliable motherboard with very capable features supporting the new Skylake X
and Kaby Lake X CPUs, the GIGABYTE X299 AORUS Gaming 3 will be an excellent
choice. Despite being more affordable that other models, GIGABYTE did not
scrimp on the different components on the Gaming 3. Thus, many premium features
are still found on this motherboard. 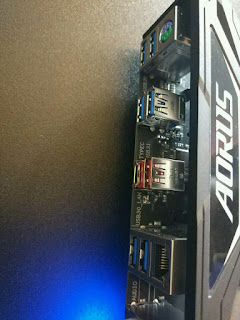 The X299 AORUS Gaming 3 motherboard
features 2 x M.2 connectors for two super-fast NVMe based SSDs. It also has the
latest USB 3.1 ports for ultra-fast 10Gbps connections to compatible devices. Like
any other gaming motherboard of 2017, the X299 AORUS Gaming 3 also features RGB
lighting. These RGB LEDs are found on the chipset’s heatsink, PCI-e slots and
to the left of the audio components.
Since this motherboard is made for gamers,
all the different hardware components are selected based on their performance
for games. For a start, the Gaming 3 motherboard has an Intel Gigabit Ethernet
network chip for great wired network performance. It also uses higher grade
audio components for great audio quality. The ALC 1220 codec is said to have
improved its signal to noise ratio from its predecessors. A built-in headphone
amp will also determine the impedance of the headphones and provide optimal
amplification for the best possible experience. 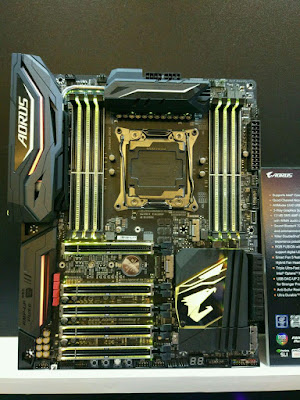 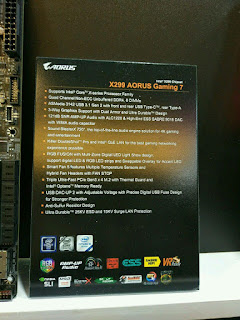 The GIGABYTE X299 AORUS Gaming 7
motherboard is the big brother of the Gaming 3. While most of the core gaming
features remain, the Gaming 7 motherboard has a dedicated ESS SABRE 9018 DAC.
This reference DAC design from ESS enables high-end audiophile grade quality of
sounds coming out directly from the motherboard. It even supports 32-bit audio
streams. 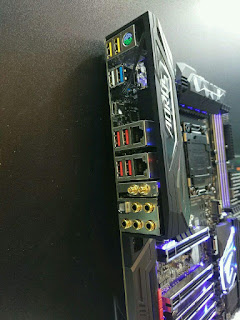 As for storage, the Gaming 7 motherboard
has one more M.2 slot than the Gaming 3. Oh yes, in case you didn’t know, all
the SSDs installed in these M.2 slots will support RAID for the ultimate storage
performance.
Other than the Intel Gigabit LAN chip, the Gaming 7 also includes a
Rivet Networks Killer E2500 LAN chip. These Gigabit network chips are known to
work exceptionally well with games, providing very low latency therefore, allow networked games to be very responsive. This motherboard also supports 802.11AC wireless out
of the box with the Killer Wireless-AC 1535 chip onboard. 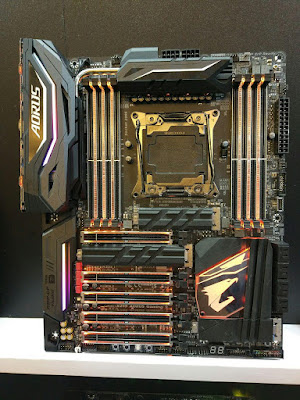 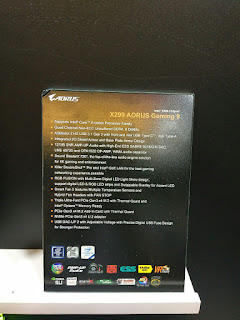 The Gaming 9 is an improved version of the
Gaming 7 motherboard. Firstly, it has got more RGB LEDs that are found
throughout the motherboard. The RGB lightings are now found on the I/O plate,
all PCI-e slots, the RAM slots and the chipset’s heatsink.
Secondly, the Gaming 9 also features an Armor
that keeps the whole motherboard sturdy and more reliable. At the same time,
the integrated base plate which is part of the whole armor set-up, also allows
the whole motherboard to support heavier coolers and graphics cards, while
increasing the heat dissipation’s effectiveness. The I/O shield is also now directly
integrated onto the motherboard. 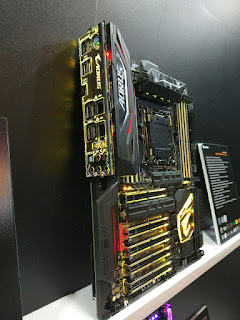 Thirdly, in terms of audio, the Gaming 9
has taken it up a notch by introducing more components to improve the intricate
details of the sounds coming out from the system. For example, this motherboard
has an additional TI Burr-Brown audio chip which is said to reduce cross talk
(i.e. interference), an independent analog power design to provide power
directly to the audio chipset, dedicated left and right signal processing with
two processors, an anti-pop circuit design and a regulator that enhances power
delivery to the whole audio architecture.
Network components and features are the
same as those on the Gaming 7 motherboard. 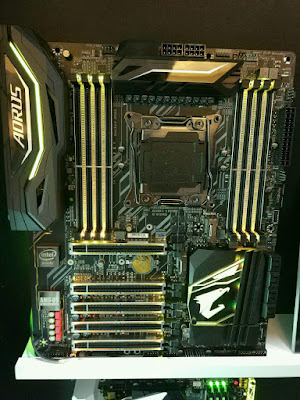 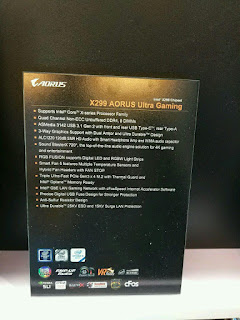 Do not be fooled by the word “Ultra”. The
GIGABYTE X299 AORUS Gaming Ultra is NOT the flagship motherboard in the whole
series. This motherboard is targeted for those who would enjoy all the basic
gaming features, while require better aesthetics than the Gaming 3 motherboard.
The Gaming Ultra motherboard has more RGB
LEDs that are found across the whole motherboard, similar to that of the
Gaming 7 and Gaming 9. It also has 3 x M.2 slots too. 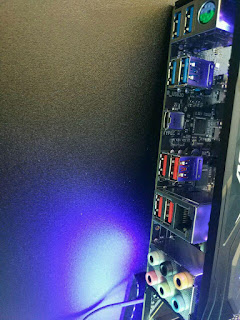 However, the X299 AORUS Gaming Ultra comes
only packed with the standard components like the ALC1220 audio codec, instead of having the premium ESS chip.
It also only has a single Intel Gigabit LAN chip instead of the Killer NIC that
was featured in both the Gaming 7 and Gaming 9 motherboards. Despite that, do take note that this motherboard has slightly more I/O ports that the Gaming 3 motherboard.

Realized that Thunderbolt 3 ports were
excluded from all these motherboards? From what we understand from the manufacturers,
Thunderbolt ports were not included initial X299 motherboard releases because they have
failed to get the respective Thunderbolt certification in time for the launch.
If you are eyeing for a new motherboard with Thunderbolt ports, we are quite
sure that some of them will be out very soon in the coming months.

GET EVEN releases in 2 days!

Are you a ‘Grow Getter’ or does your Business Fail to ‘Get Growth’?