HOOQ’S FIRST INDONESIAN ORIGINAL
PRODUCTION GOES TO CANNES
‘MARLINA
THE MURDERER IN FOUR ACTS’ MAKES ITS WAY TO CANNES
AND
WILL BE SCREENING AT THE DIRECTORS’ FORTNIGHT.
SINGAPORE, 18 April 2017
HOOQ –
the largest Video on Demand service in South-East Asia, announces that its
first Indonesian original production will be screening at the Director’s
Fortnight in Cannes which opens this week.  This is on the back of a
series of announcements from HOOQ that underscores its commitment to Asian film
production through ventures with top independent studios and filmmakers in the
region.
“HOOQ is very proud that Marlina will
be screening at Cannes Directors’ Fortnight this year!  We look forward to
many more successful HOOQ original productions that will gain recognition in
the international film industry, but more importantly will keep our customers
HOOQ’d month after month!  Our continued commitment to the Asian film
industry will see us investing in more original productions with the goal to
give new and established talents an avenue to tell their stories in multiple
formats – be it a feature film or a 10-part series,” said Peter Bithos, Chief
Executive Officer of HOOQ.
In
addition to Marlina the Murderer in Four Acts, HOOQ
recently announced a host of original productions – Critical Eleven and Sweet
20 to hit cinemas in May and June 2017 respectively, the highly
anticipated On the Job which will debut in cinemas in August
followed by a 5-part series that will launch exclusive on HOOQ 6 weeks
later and The T Party (working codename) will hit the
service later this year.  At the same time, HOOQ also announced a new
initiative HOOQ Filmmakers Guild – which is a search for Asian
film talents to turn their ideas into reality.
MARLINA THE MURDERER IN FOUR ACTS
The most recent work of director Mouly Surya
(36), Marlina the Murderer in Four Acts will premiere on 24
May 2017 at Quinzaine des Réalisateur (Directors’
Fortnight) which takes place in parallel to 2017 Cannes Film Festival.
Marlina depicts the story of a widow on her journey to look for
justice after a band of robbers assaults her.  This film written by Mouly Surya and Rama Adi
is based on Garin Nugroho’s story idea.  It is produced by Rama Adi and
Fauzan Zidni and starring Marsha Timothy, Dea Panendra, Yoga Pratama and Egi
Fedly.
“It is a big honor to be included in the
Directors’ Fortnight line up, an event to seek the world’s famous auters with
more edgy works.  This is a good event forMarlina and I hope
the film will get the opportunity for a wider distribution after this
screening,” said Mouly Surya during the press conference at Plaza Indonesia on
12 May 2017.
Marlina is a co-production between Cinesurya, Kaninga Pictures (Indonesia), Sasha & Co
Production (France), Astro Shaw (Malaysia), HOOQ Originals (Singapore) and
Purin Pictures (Thailand).
Chairman of Indonesian Creative Economy Agency
Triawan Munaf said, “Mouly Surya’s success in the Cannes Directors’ Fortnight
is a major achievement for Indonesian cinema.  Aside from being selected
in this section for the first time, an Indonesian film is finally being
featured again in the world’s most prestigious film festival.”
The Counselor for Cooperation and Cultural
Action of the Embassy of France and Director of IFI Marc Piton said, “Supported
by CNC, IFI and Cinema du Monde, Mouly’s work has marked close relationships
between Indonesia and France in cinematography.  Being selected for the
Director’s Fortnight at Cannes also shows that Indonesian films are gaining
more recognition internationally.”
Organized by Societe des Realisateurs de Films
(French Directors Guild) and initially held in 1969, the Directors’ Fortnight
that runs parallel to the Cannes Film Festival aims to aid filmmakers and
contributes to their discovery by the critics and audiences alike.
The Director’s Fortnight has discovered and
debut famous directors such as Werner Herzog, George Lucas, Martin Scorsese,
Jim Jarmush, Michael Haneke, Spike Lee, Sofia Coppola and many more. The
selected titles will be premiered at the festival starting from 18 – 28
May 2017 in Cannes, followed by the premiere in Marseille, Paris, Geneva,
Rome, Milan, Florence and Brussels.
Marlina was previously selected for the Asian Project Market at 2015
Busan International Film Festival and Cinefondation L’Atelier at 2016 Cannes
Film Festival.  This film received funds from Talents Tokyo through the
Next Masters Support Programme and subsidy from Cinémas du Monde from French
Ministry of Foreign Affairs.
Marlina is the fourth full-length feature film from Indonesia to be
selected for the Cannes Film Festival.  The previous three films are Tjoet
Nja Dhien (1988, Semaine de la Critique), Daun di Atas Bantal (1998, Un Certain
Regard) and Serambi (2006, Un Certain Regard).
Mouly directed What They Don’t Talk
About When They Talk About Love (2013), the first Indonesian film
selected to compete in the World Cinema Dramatic Competition at the Sundance
Film Festival.  Her first film, Fiksi (2008), led Mouly
to be the only female who received Citra Awards for the best director.
HOW TO GET HOOQ
It’s
easy to get HOOQ’d.  Customers can simply download the HOOQ app from Apple
Store or Google Play, sign up or log in, to access HOOQ’s library of top
Hollywood and Asian hits anytime, anywhere and on any device including
computers, smartphones, tablets, set-top boxes, and smart TVs via Google
Chromecast and all Apple devices.
Sign up today for a 7-day free trial at www.hooq.tv and
pay for the subscription through credit card. 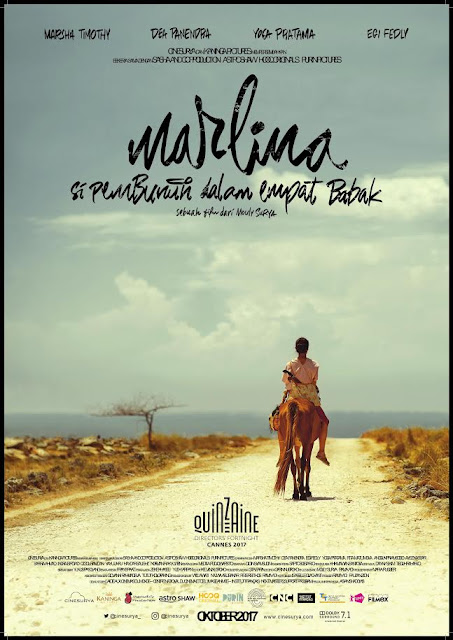 Get Data Recovery Skills or Be “Taken” by Ransomware