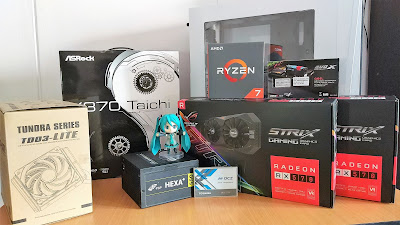 AMD has managed to get quite a bit of attention with their new Ryzen processors for their performance capabilities, which gives great value to consumers. After years of waiting, it is finally possible to build a new computer just solely on new AMD hardware! The launch of the Ryzen processors have reignited the flames in many AMD fanboys’ hearts. Of course, it would be extremely satisfying to build a new beautiful system with these new hardware. That is what we are going to explore into in this article.

With absolutely no considerations on the cost for our recommendation, we simply took the computer components we have for reviews and put them together. Who knew that these parts would come together and make such a sexy and beastly machine! 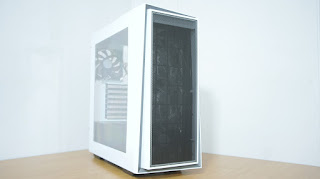 Perhaps, we had much more of a focus on the aesthetics of the whole build rather than on the practicality and performance of the system. With the white Silverstone RL06-PRO computer case as our choice, it was straightforward to go for a black and white theme. Besides, a such a theme would be perfect for a minimalist style. Read more about the RL06 in our previous article. 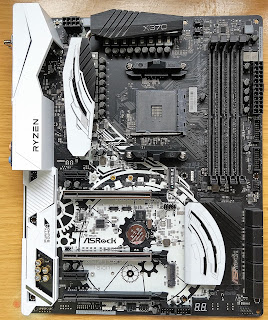 For our build, we have the ASRock TAICHI X370 enthusiast grade motherboard. It has practically all the different features that you wanted on a premium motherboard. Furthermore, it is perfect for our build, as it comes in a black and white colour scheme as well. Here are some of the main highlights of the X370 TAICHI motherboard that makes it such a natural choice for a high performing machine. 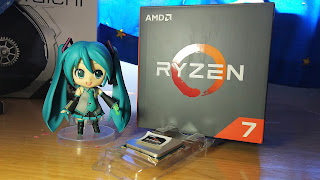 For our choice of processor, we had the AMD Ryzen 1700X for our build. We chose the 1700X simply to find out the overclocking capabilities of this CPU on this motherboard. We were also quite eager to see if it was able to reach a similar performance level to that of a costlier Ryzen 1800X processor. Here’s our previous performance review of the Ryzen 1800X. 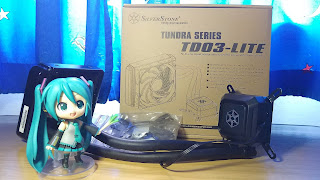 To tame the heat coming from the 95W package of the Ryzen 1700X, we had the SilverStone Tundra TD03-LITE left in charge. The Tundra TD03-LITE is one of the earlier AIO watercooling solution that comes equipped with the new AM4 brackets. It is also said to perform rather well for its 120mm form factor and affordable price segment.
The Tundra TD03-LITE has a fully copper base plate and 0.2mm micro-chamber waterblock design for the best possible heat dissipation. Of course, we do have quite a bit of expectations from the water cooling unit.
Oh yes! Since this CPU cooler also has a white LED indicator on top of the water-block, it is also a perfect combination to our build as well! 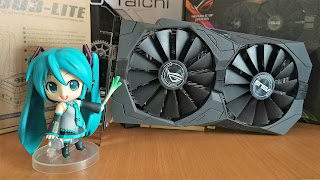 We have decided to go with a dual ASUS RADEON STRIX RX570 OC setup for our build. If you have not seen our performance review of this graphics card, you can find out more here. Our previous review shown the prowess of a single RX570. What happens when we have 2 of these operating together in CrossFireX mode? This should be an interesting setup to test!

If you are a AMD fanboy, this build could possibly be what you have always wanted. I am even jealous of myself for such a sexy desktop system build as well! (Because I have to tear this unit down and return the respective components after the review.) 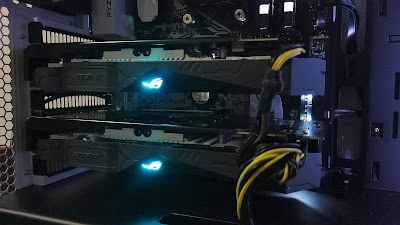 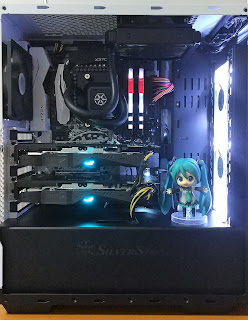 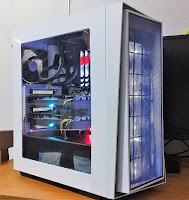 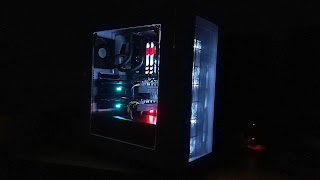 In our benchmark tests, we aim to find out the performance of the whole system in different usage scenarios. We will test this new system with some games in 2560 x 1440 resolution and see if it will be able to perform at a playable framerate. We will also use synthetic benchmarks to compare this system to other computer systems.

Getting to 3200MHz DRAM Speed 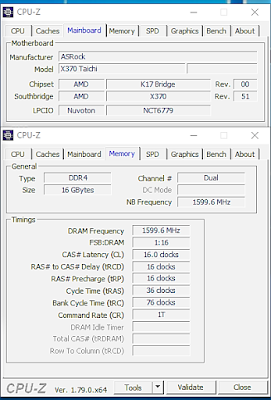 Based on our previous experiences on motherboards from other manufacturers, it was much easier to get 3200MHz DRAM speed on the X370 TAICHI. In fact, it was almost trivial. We simply had to apply the 3200MHz RAM profile, and the configuration will simply worked! In fact, this was the first time the unit of Geil EVO X RAM managed to run at the 3200MHz speed on a AM4 platform. It was even able to be stable at a rather good timing of 16-16-16-36-1T. 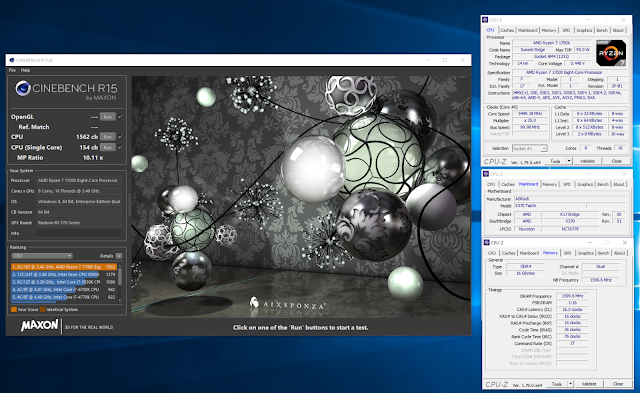 AMD has admitted that the AMD Ryzen system architecture is not tuned to most games on the market right now, as most game makers did not develop the games to take advantage of the AMD Ryzen architecture. However, the processor is still able to perform considerably well, and is not a source of bottleneck for the games. The CrossFireX setup with the RX570 managed to get average frame-rates of above 60 for both games that we tested with at the 2560 x 1440 resolution. 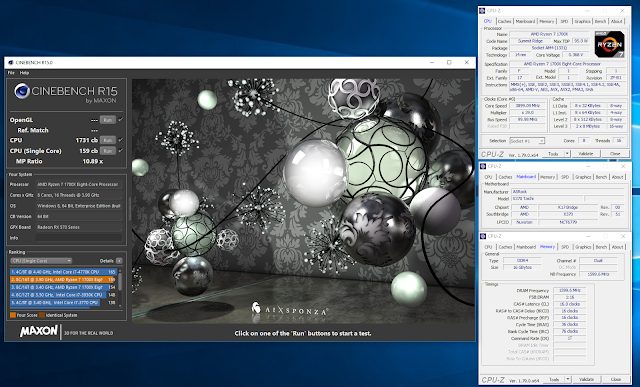 ASRock X370 TAICHI motherboard has an intuitive feature for overclocking of the Ryzen processors. Users had to simply select the preset overclocking mode and the motherboard itself will do its magic. With a selection of the 3.9GHz preset, we managed to overclock this processor to 3.9GHz in a breeze. With this increase in clock speed on all the 8 cores of the processor, we managed to score of 1731 on the CineBench R15 multithreaded test. This is a 10% increase in performance from the scores taken at stock settings. 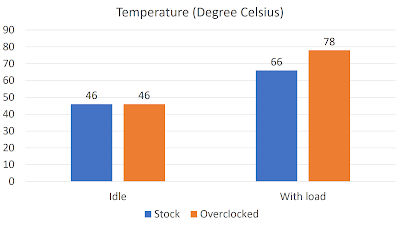 Our measure of temperature was done with the HWMonitor software provided by CPUID. This reading was taken from CPU Package reading, and reflects the overall temperature of the whole CPU unit. The idle reading was taken when the system has completed booting, while the load reading was taken when the Cinebench R15 multi-threaded benchmark test was at 80% complete.
The effectiveness of the SilverStone TUNDRA TD03-LITE was apparent in our temperature tests. It was able to keep the 8 core 16 threaded beast well tamed at a temperature of 46 degree celsius when on idle. When on extreme loads on all the cores, the temperature was also quite low. The reason for the rather high temperatures on load in overclocked settings was due to the increased voltage to sustain the overclock, as well as because the same 3.9GHz overclock was applied across all the cores. At stock mode, when on load, only certain cores are overclocked under AMD’s Extended Boost and XFR technology.

The temperature of the system should not be too much of a worry to users, as AMD has also explained that the temperatures that are captured by software could be inaccurate to up to 20 degree celsius. To learn more, please visit the AMD Community page.

This is one of the most complete build that we have done so far. It is able to bring out the benefits of customization through RGB LED and gave the whole build a strong sense of identity and theme. The black and white colour combination also gave the build a very clean and simple design and style.
Most of the features of this whole system were all granted by the ASRock X370 TAICHI. The motherboard was also able to effectively overclock the system to a level of performance much closer to a stock Ryzen 7 1800X, which is actually about a hundred over Singapore dollars more, bringing even more value to the whole setup.
In terms of performance, we wished that this AMD setup could have been improved with better graphics capabilities. Despite the fact that there were 2 of the RX570 graphics card working together in this configuration, we could see that this performance level is still not adequate for higher end 4K gaming. We could only settle with 2K gaming for optimal experience. This gives us even more reason sto anticipate the upcoming AMD VEGA graphics cards, which are said to be due this June. 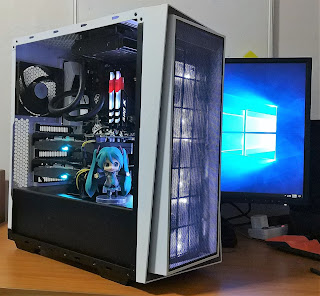 We are very proud of the AMD Fanboy’s Gaming Desktop Build of H1 2017 with its great design and performance. What do you think of such a setup? Let us know any suggestions or changes you would like to see in our future builds.

Special thanks to AMD, ASUS Singapore, ASRock and Silverstone for the loan of the different PC components featured in this build.

GeForce Gamers are Game Ready for Prey, Battlezone in VR and more